Dubai Creek- once the River Zara

Dubai Creek is a wide sea water inlet that runs between Deira and Bur Dubai. It was known to the Greeks as the River Zara, but despite some unsubstantiated historical accounts that it may have reached as far inland as Al Ain, it appears to have never been more than an inlet.

Now dredged and widened to accommodate modern shipping, Dubai Creek now forms one of the most characteristic comparisons that makes Dubai a constant wonder.

Two extremes of transportation can be seen here. The intercontinental aircraft above, and the traditional wooden dhow beneath the ever-growing modern urban landscape of Dubai.

The port of Dubai on Dubai Creek 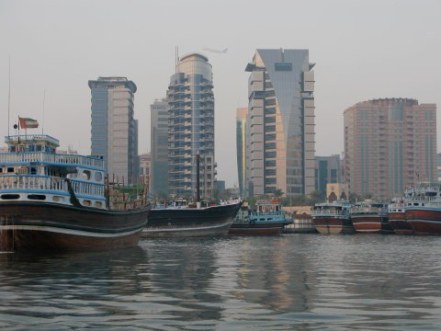 Right beside all this, just as they have for centuries, the ancient wooden dhow traders still ply their commercial trade between Dubai Creek, Oman, Iran, India, and Africa. 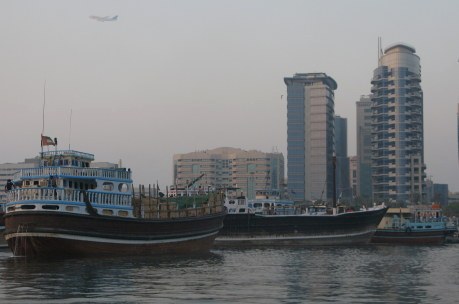 Dubai Creek has been the centre of trade for centuries.

Excavations at nearby Jumeirah revealed a trading caravan of the Sassanids, for whom it was both home and trading base from the period around 224 AD until overthrown by the Islamic Umayyads, who built a thriving international trading centre that peaked between 750 and 1258 AD.

It has remained an important trade centre – attracting European efforts at dominance: first from the Portuguese, then the French, Dutch and British, who finally created treaties in 1766 enabling Dubai to be a sort of free-zone for imports and re-export – particularly of gold.

The fact that this was so shows the importance of theis trading crossroads, because these treaties were made at a time when other places were held tightly under trading restrictions that did not here apply. 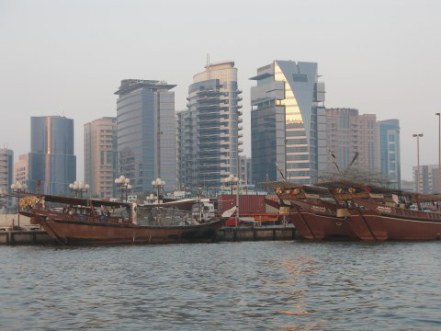 The modern cruise ship terminal is at Port Rashad, but Dubai Creek has been for centuries the site of the local wooden ship building industry in the Emirates region.

To make a dhow, heavily planked wood teak and sheesham (known in the west as Indian Rosewood) are overlapped to form the exterior shell, with the metal frame then being created inside – opposite to western tradition which builds the frame and then clads it.

To be really impressed with this process and the length of time it takes to create these beautiful and sturdy traders, have a look at this video

Building a wooden Dhow in Dubai

As well as trading vessels, these methods still produce elegant leisure ships like this… 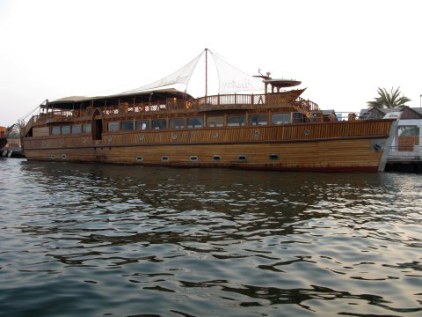 …or other smaller and larger examples, here moored side by side.

They all have careful detailing, like that of this one called 'Greek Prince'. 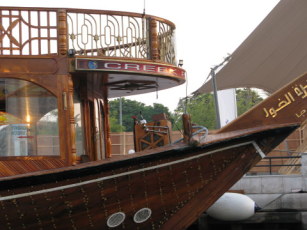 Situated on Dubai Creek, Deira has always been a trading centre, and there are still many souks, including the famous Gold Souk.

It is a bustling commercial area where you can still capture some sense of the earlier Dubai.

Some travellers prefer to immerse themselves in this atmosphere by staying here rather than in the big resorts or 'luxury-in-excess' hotels elsewhere in Dubai.

Deira is also where you can hire water taxis or Abras –small, traditional, hand-made wooden dhows used by about 15,000 people a day as their daily transport across and around Dubai Creek. 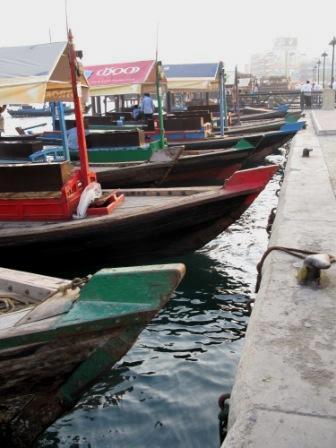 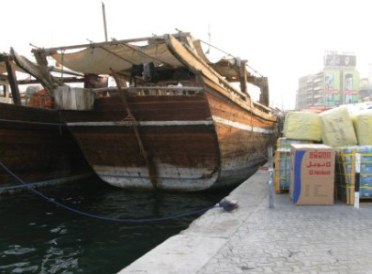 …with their goods stacked on the dock beside their moorings. 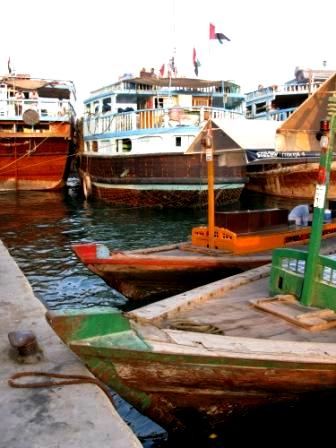 To take a water taxi in Dubai is to be transported – metaphorically as well as physically – for, in the course of a single round trip you edge out past the moored freighter dhows… 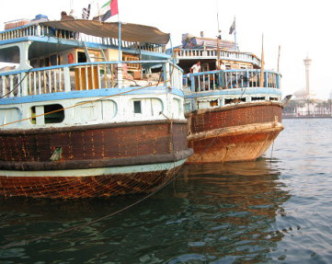 …passing low beside those arriving in port… 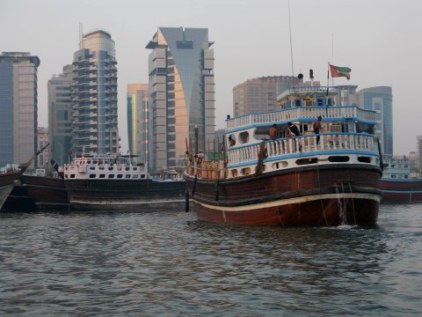 …and then leave the commercial port of Deira behind. 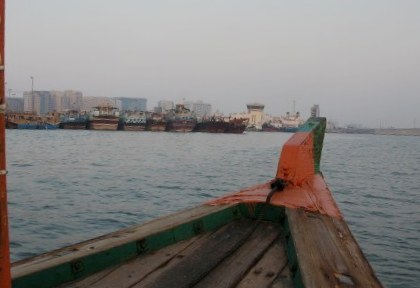 On the other side of the river is the last of traditional Dubai housing.

This is the Al Bastakiya district.

Here, there are still traditional wind towers built to capture and cool the wind as it flows downward through to the housing below - and the Minaret and dome of the Al Bastakiya Mosque. 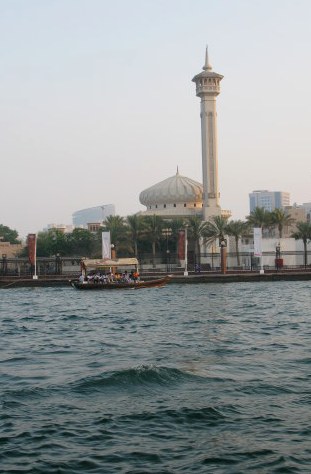 In 1989, prior to the planned visit of Prince Charles, the Al Bastakiya district alongside Dubai Creek was facing demolition to make way for new developments.

A British architect, Rayner Otter, knowing of the Prince’s passion for protection of heritage buildings, wrote in support of keeping this last vestige of old Dubai culture.

During his visit to the Emirate, Prince Charles asked to tour the Al Bastakiya – and after his visit it was made available for restoration. Perhaps a coincidence of timing - but at least all history has not been eraced int he sprint for modernity.

As the twilight colour intensified, the minaret of the Al Bastakiya Mosque was transformed as an etched outline beside the bulky dhow trader. 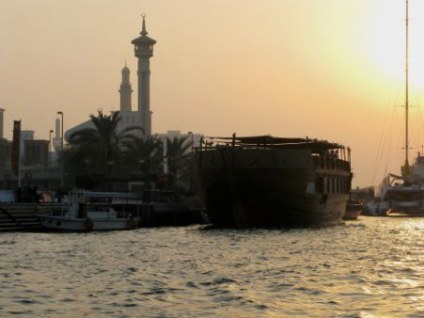 With the setting sun, the party dhows put on their fancy dress. 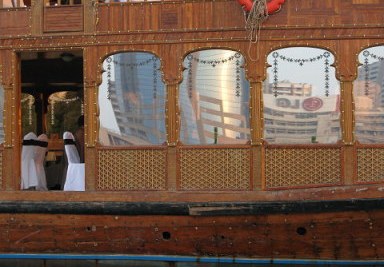 They became illuminated for their guests. 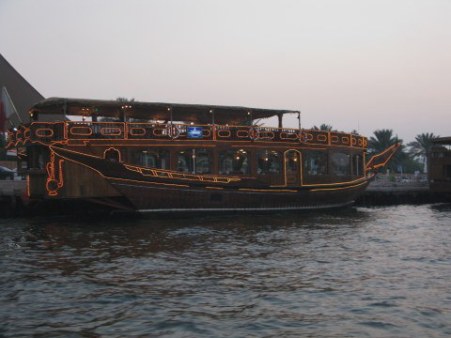 As the sun started to sink lower, the water taxi brought us into a sort of magical zone. 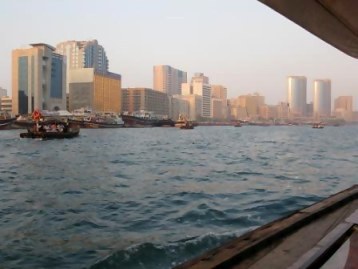 Dubai Creek was busy with other water taxis and smaller dhows as we approached the Deira Twin Towers. 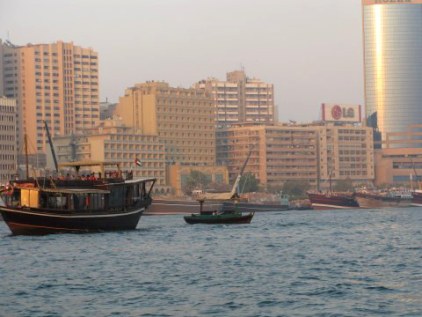 Here there was a sponstaneous art work made from reflections: the golden sunset colours forming a long vertical band on each tower, seeming to accentuate their curves. 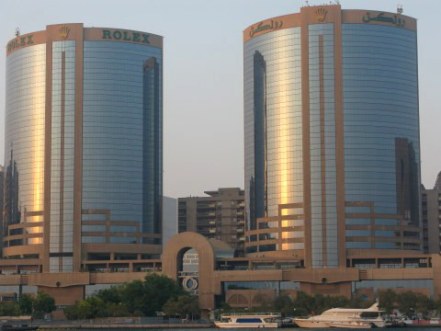 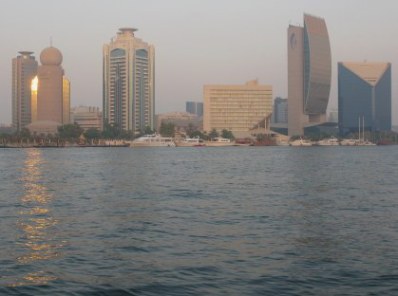 We drew closer to the Dubai National Bank Building, locally referred to as 'the pregnant lady', due to the convex front. This frontage is actually designed to reflect the curve of a dhow hull.

The building construction is attributed to Dubai engineers and architects in association with NORR International and the Uruguayan architect Carlos Ott, who lives in Canada.

Ott is the person that it has been said may have done the original unsigned sketch that was later transformed into the Burj Al Arab by W.S. Atkins and Partners.

As we approached, the front of the Dubai National Bank Building was glowing in layered colour beside the Chamber of Commerce Building, where there was a similar but more muted effect on the glass front. 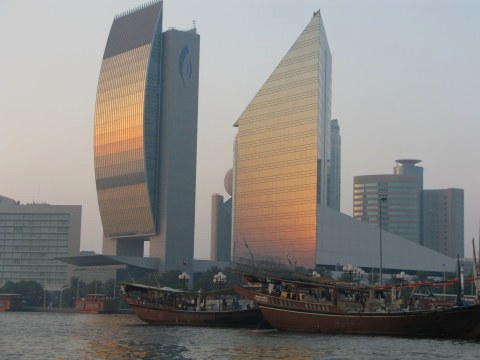 The Etisalat tower had shed its golden mantle and emerged behind the Dubai National Bank curve.. 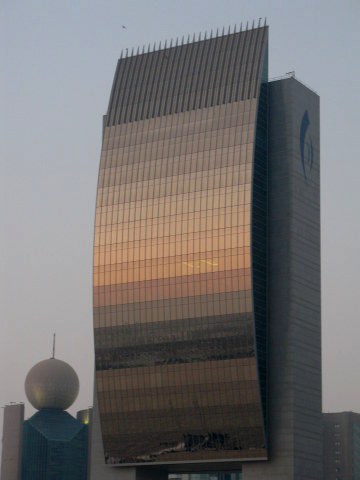 As the sun set deeper on the horizon the colours intensified in bands along the convex glass, clearly reflecting the passing water taxis and moored dhows on Dubai Creek, below. 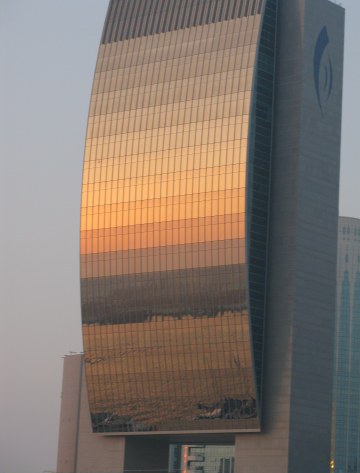 On the other side of the creek, I watched the sun, seeming like a perfectly round hole punched into the deep pastel rose coloured sky canvas.

It travelled past the arch of this building in Bur Dubai. 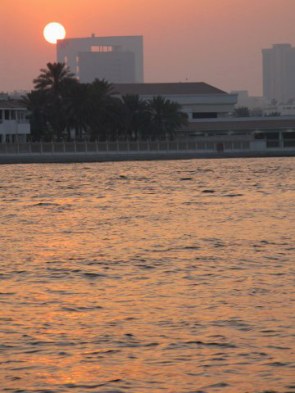 The dust haze created by being on the edge of the desert made the colours seem almost artificial. 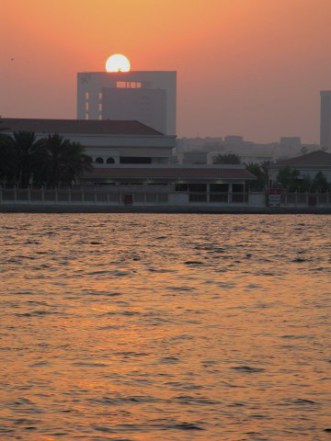 Finally, the reflected sunlight turned Dubai Creek into a river of molten gold. 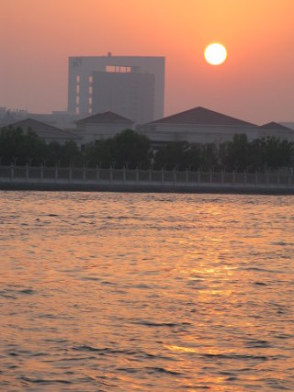 Through this liquid richness of shimmering colour our little abra carved its route as we headed under the bridge, leaving carefully cut rolls of golden water in our wake.

On the return trip, the minaret of the Al Bastakiya Mosque seemed dwarfed by the mast of this huge yacht. 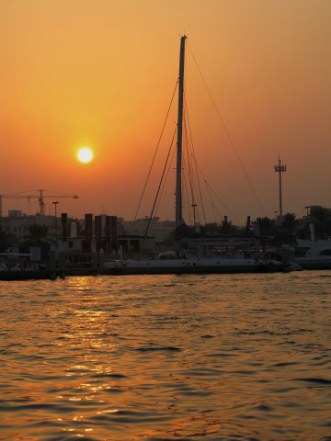 By now, the sinking sun had travelled further from the arch behind which it had been briefly veiled on the way down the creek. 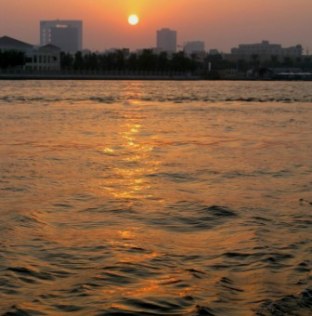 As we passed under the bridge the round, golden orb caressed the pal tops. 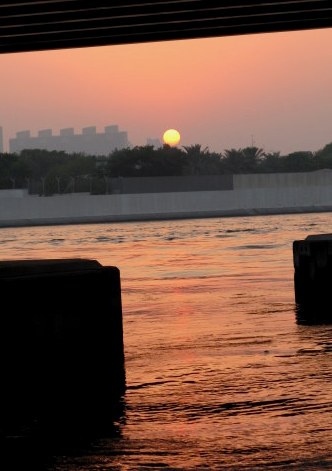 I could not help but think of the unattributed quotation that says:

Even the most beautiful days

eventually have their sunsets

That beautiful day - a day that ended with a sunset water taxi ride on Dubai Creek - is painted with sunset colours in my soul.