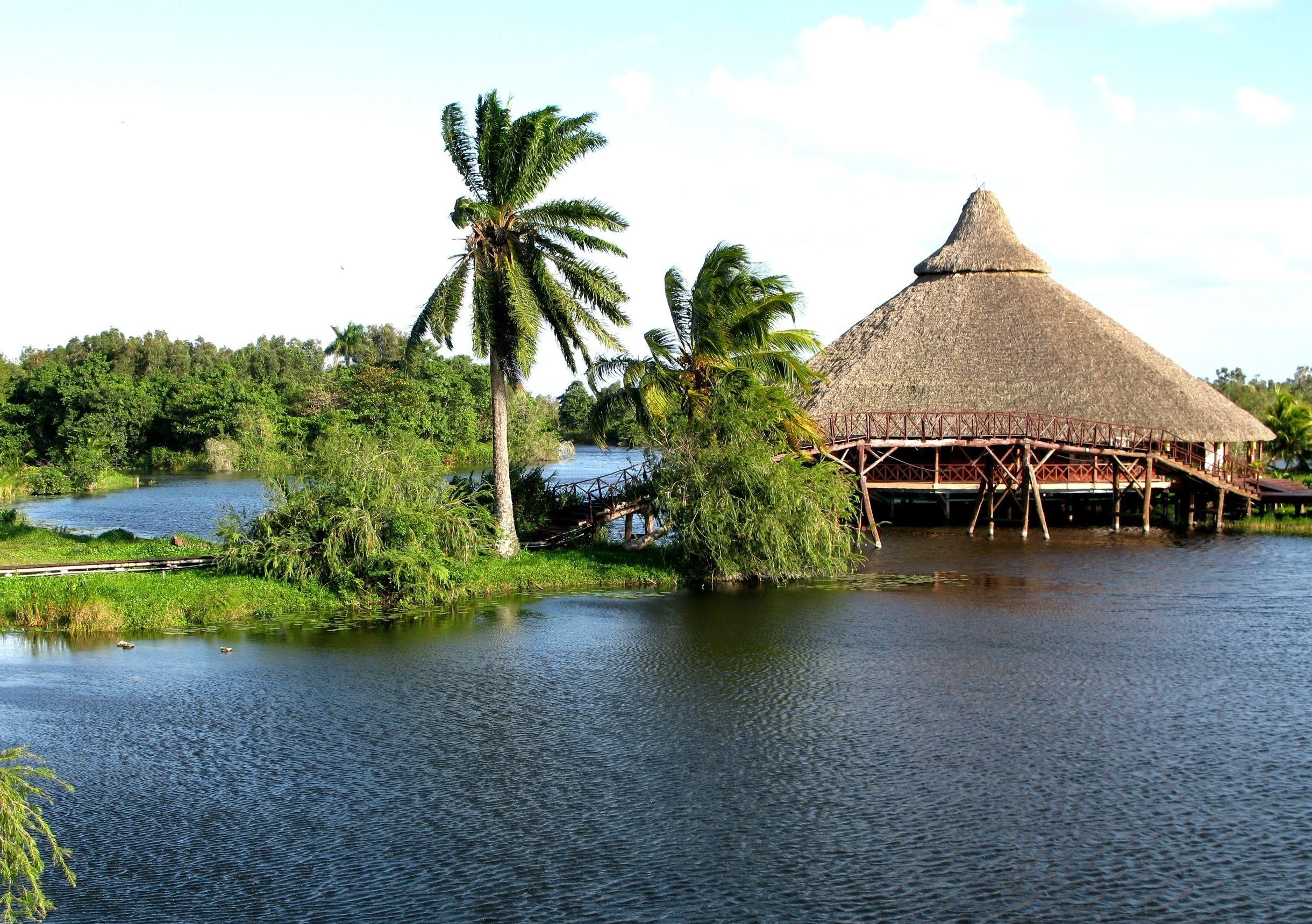 The Guamá Resort was one of the first works appointed by Fidel Castro after the revolution, naming it after a Taíno chief who had also valiantly led a fight against Cuban colonisation, albeit unsuccessfully.

Previously, Guamá was one of the most famous fishing and game reserves in Latin America, but was off-limits to Cubans, as it was in private ownership before the Revolution.

It is now a tourist attraction - even if a little off the more familiar tourism routes of Cuba - and is reached by launch from a brightly coloured ticket office beside Treasure Lake. 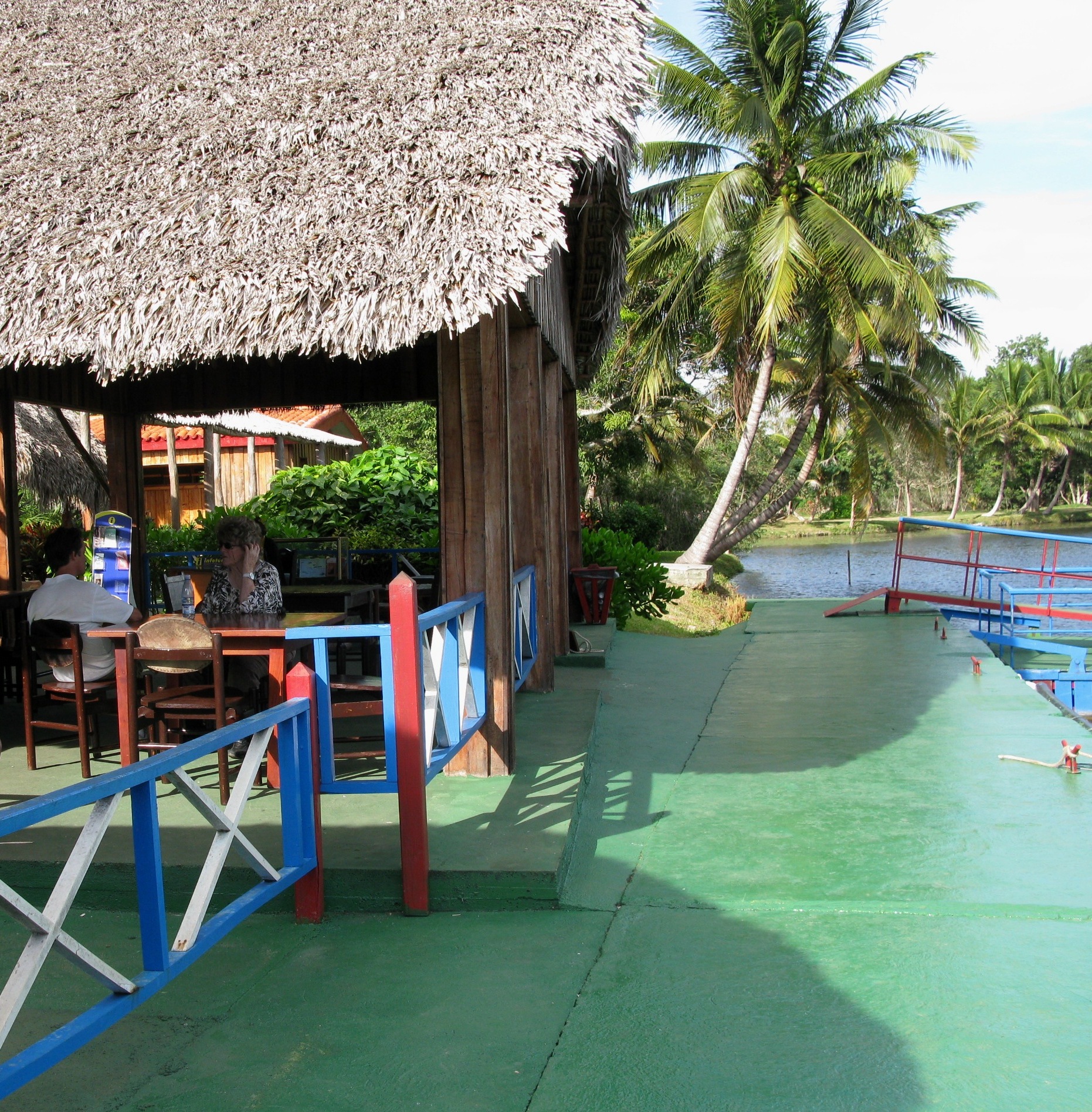 Treasure Lake - myth - or
are
there here
treasures of a different sort?

This is the largest freshwater lake in Cuba – over 16 square km (6.17 sq miles). Its name reflects a popular story that the Taíno Chief had the village treasure thrown into the lake to stop it being seized by the Spanish.

Given the lack of treasure hunters seeking either to make their fortune, or to disprove the legend, maybe the treasure has long since been found and removed. Perhaps it never existed.

The story of treasure doesn’t seem to be a part of the locally accepted folklore. I read it only in tourist documents and could find no references in other research – but may have missed it.

Perhaps those who write such stuff think that no lost village (even a recreated one) should be without its treasure story.

We passed two fishermen on our launch trip across the lake.This one in a canoe... 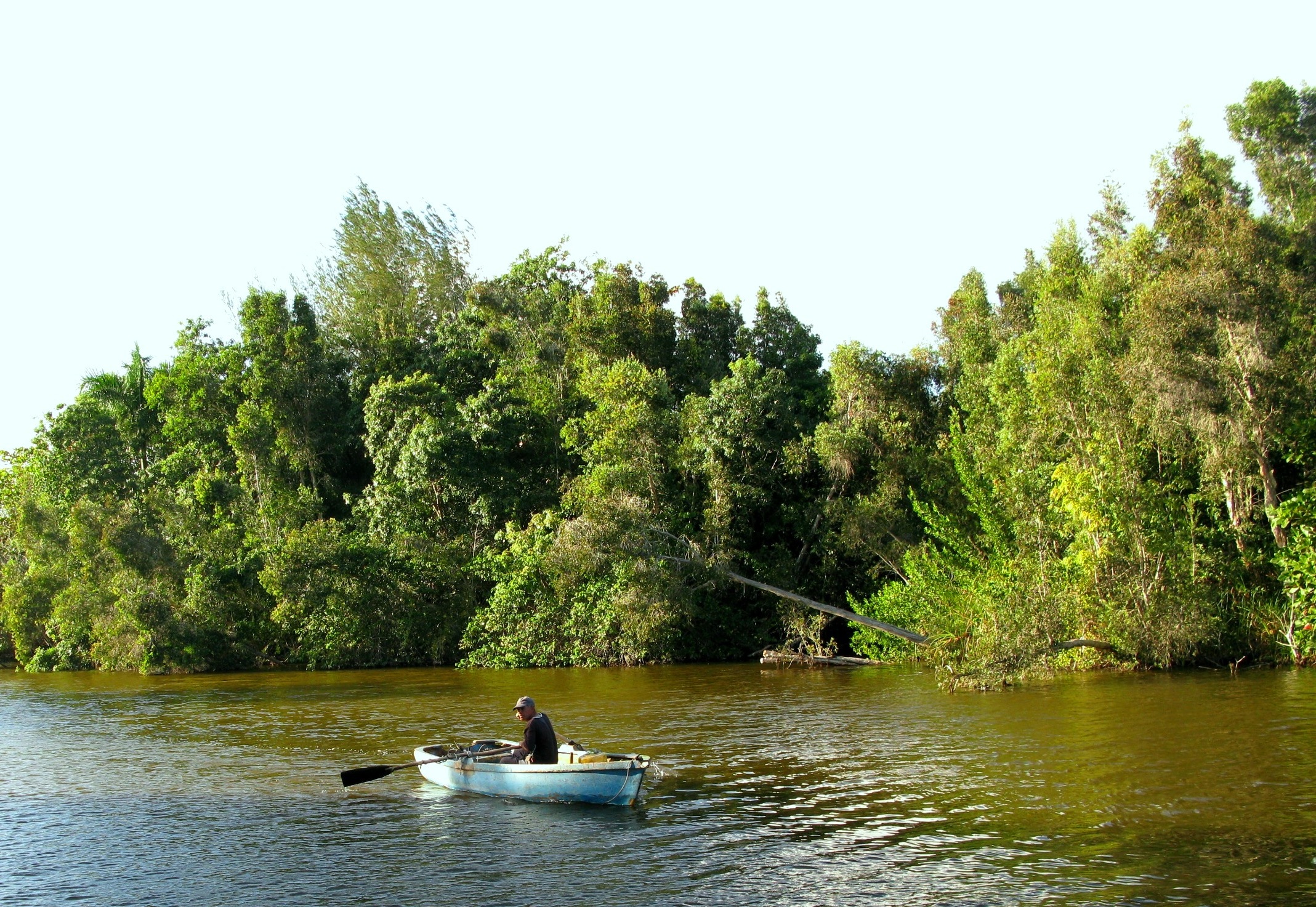 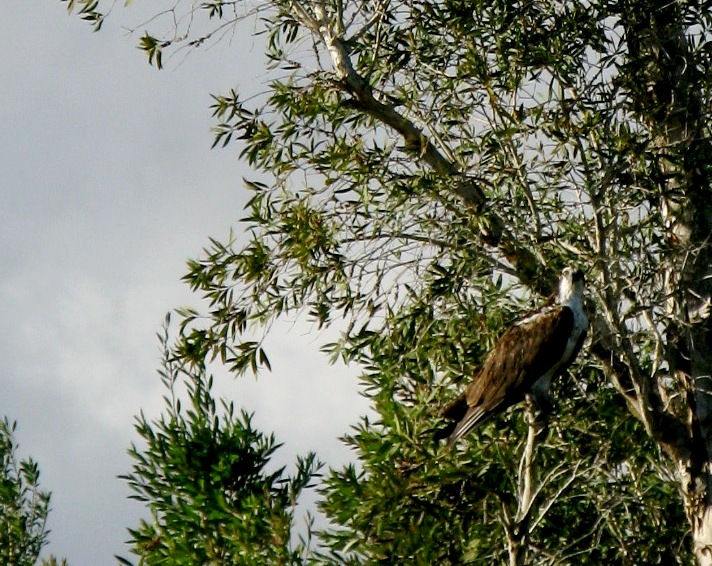 and this one a native fisherman not needing a water craft.

Perhaps the osprey knew more about the lake than any other fisherperson, although the oldest one known lived over 30 years, so he could not have known of the rich Taíno heritage, if there was indeed such a heritage locally. 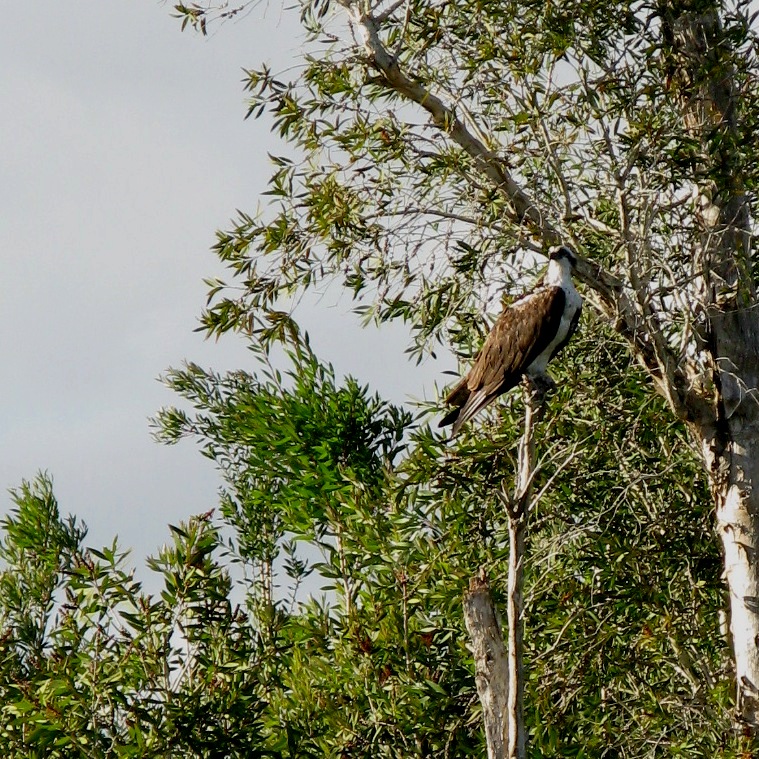 Gifts of the Taíno

The Taíno were indigenous people of the Caribbean whose actual site of origin is variously attributed, but whose people themselves saw Hispaniola (modern Haiti) as the heart of their cultural heritage.They were hospitable people, as recorded by the diaries of Chrisopher Columbus, offering to the strangers gifts of sugar and tobacco. They had deep respect for the natural world, and with every harvest they said a short prayer and gave a gift back to the earth - a buried coin or stone. Sadly the Spanish did not respond in kind and soon the population was decimated by new diseases and slave labour.

We remember the Taíno when we drowse in a ‘hammock’, attend a ‘barbeque’, take shelter from a ‘hurricane’, or smoke ‘tobacco’.

These are all words the Taíno gave to us, and it was the Taíno who taught the Spanish to make cigars.

The Guamá re- created Taíno village was built from timbers Fidel sourced himself - and its design is true to early records of such villages. 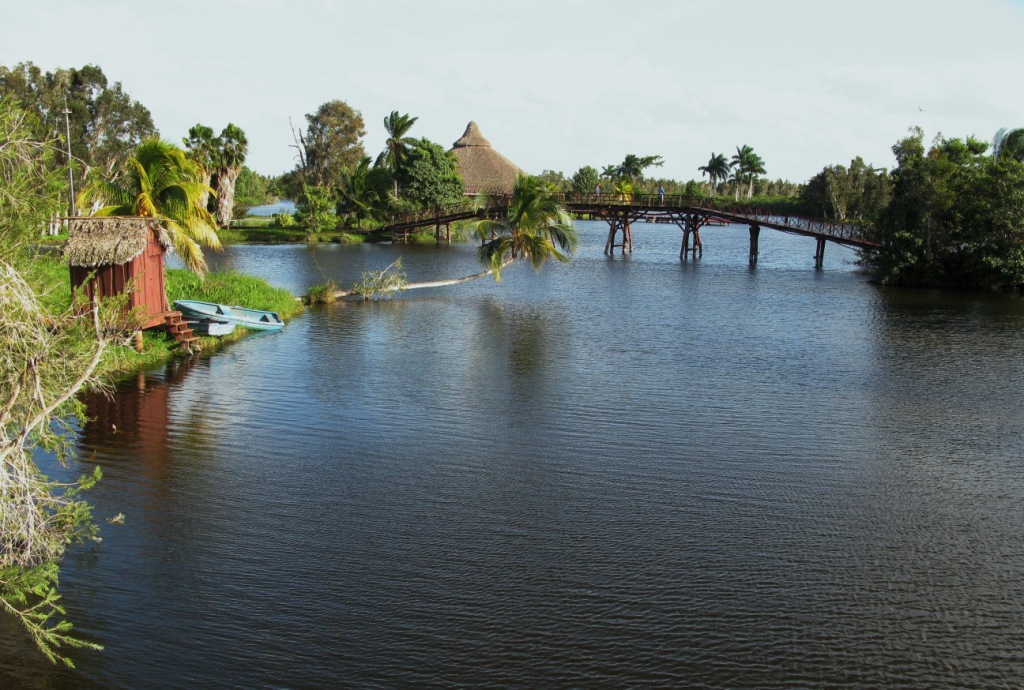 Meeting of perceived history
and reality of the now 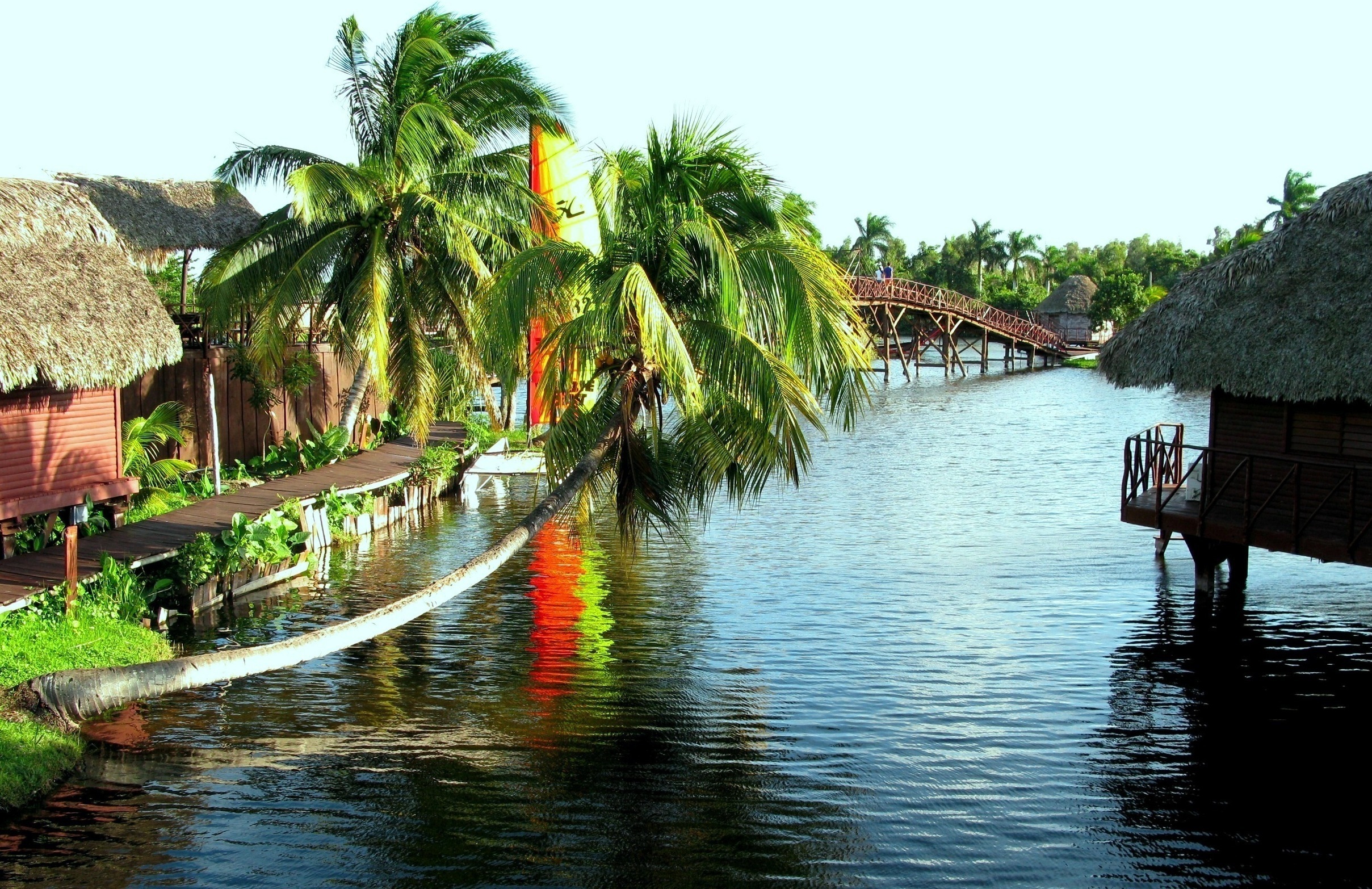 I am sure they didn't come in colourful launches as did we. 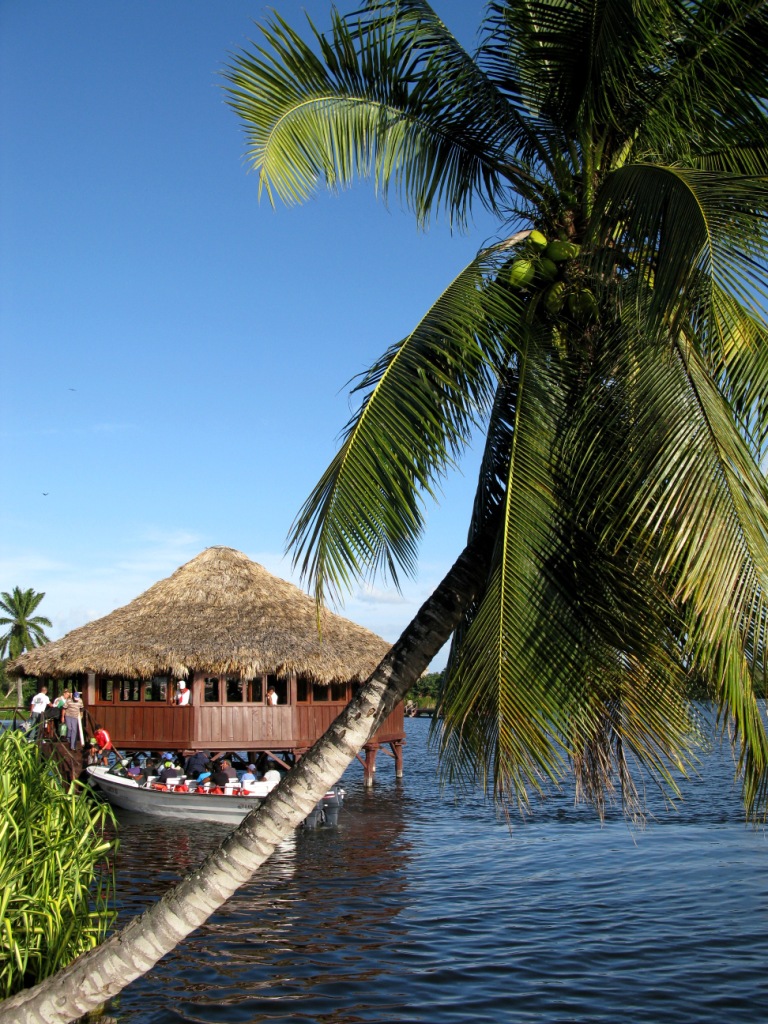 It may well have been that they did have sailing craft,  but possibly not Hobicats! 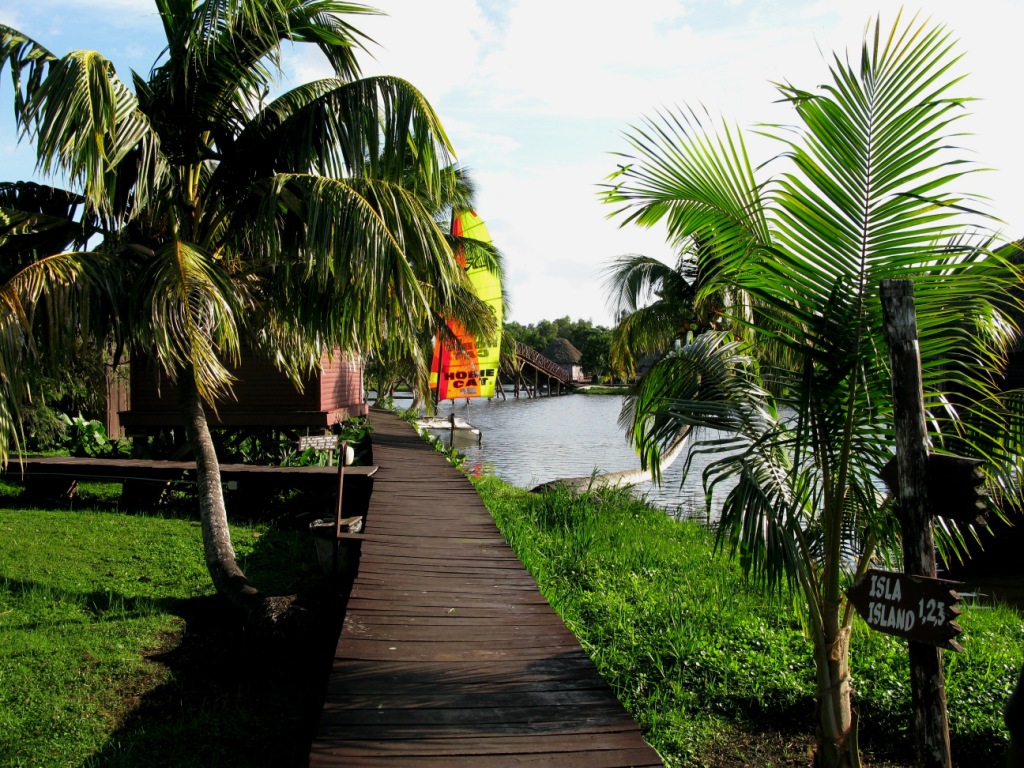 On our launch trip back from the short half-day outing, we paused before a giant anthill. Coming from Australia such a sight was not an unusual one for me.

Termite mounds like this are called termitariums and they pop up all over Australia: no building permits required. Their construction is complex and individual.

Termitariums are made from soil bound with saliva and excreta. This makes for differences in colour according to the variation of proportion and component makeup of each of both elements. The combination is robust and forms a structure that can last over a hundred years.

There are over 2,000 known types of termites and about 350 varieties make Australia their home. In the tropical north, the termites eat spinifex – a coastal grass species that flourishes in sandy conditions. The resulting mounds of this region can be 7 metres high (almost 8’) and weigh around 10 tonnes (22,046lbs).

This one in Guamá was grafted around a tree trunk. 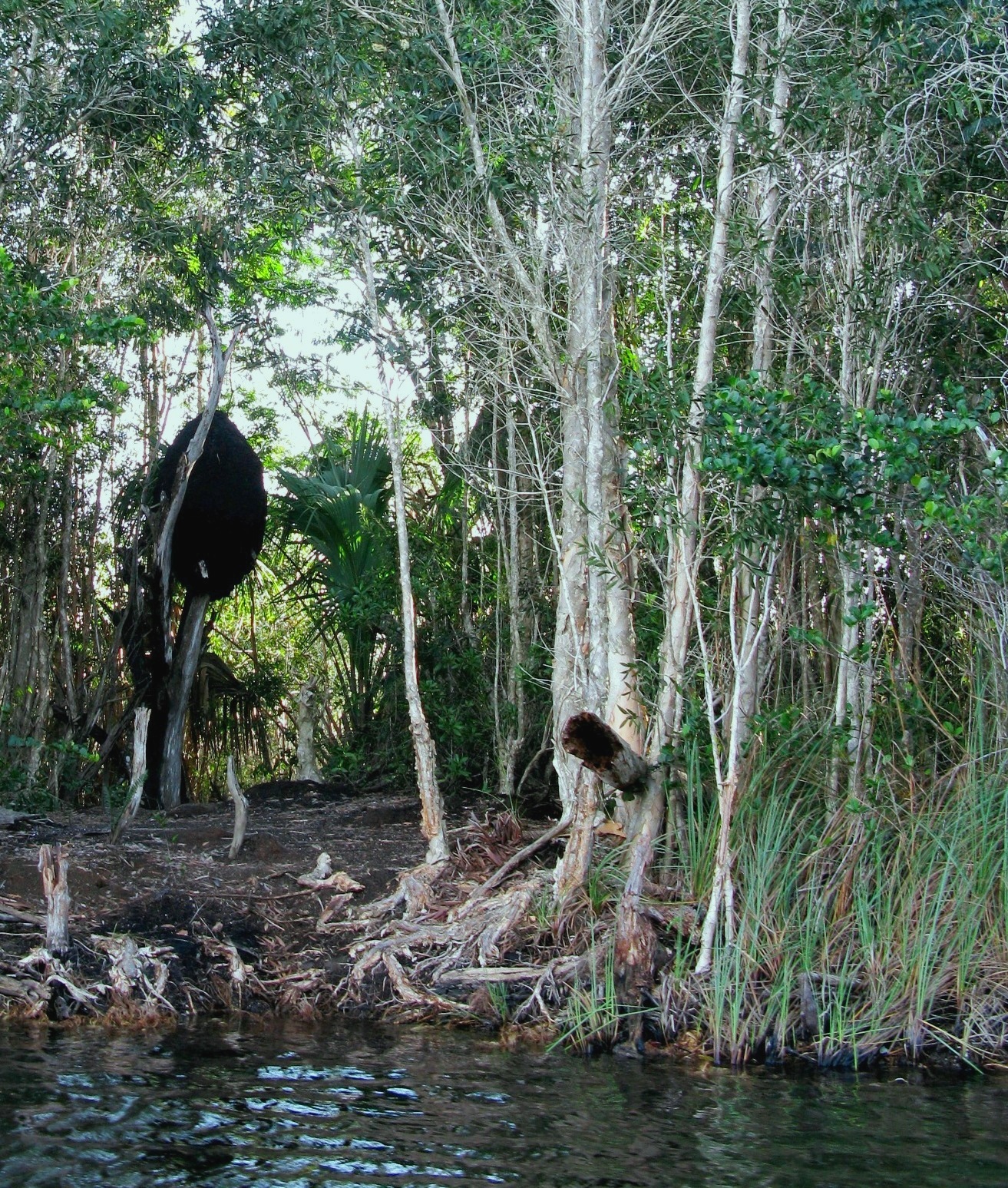 I found the Guamá resort full of contrast. On the one hand, Fidel certainly chose a wonderful location. I preferred its quiet waterways and native birds.

Records taken in  2017 identified  a total of 398 species of bird in Cuba, only 25 species of which are true natives. 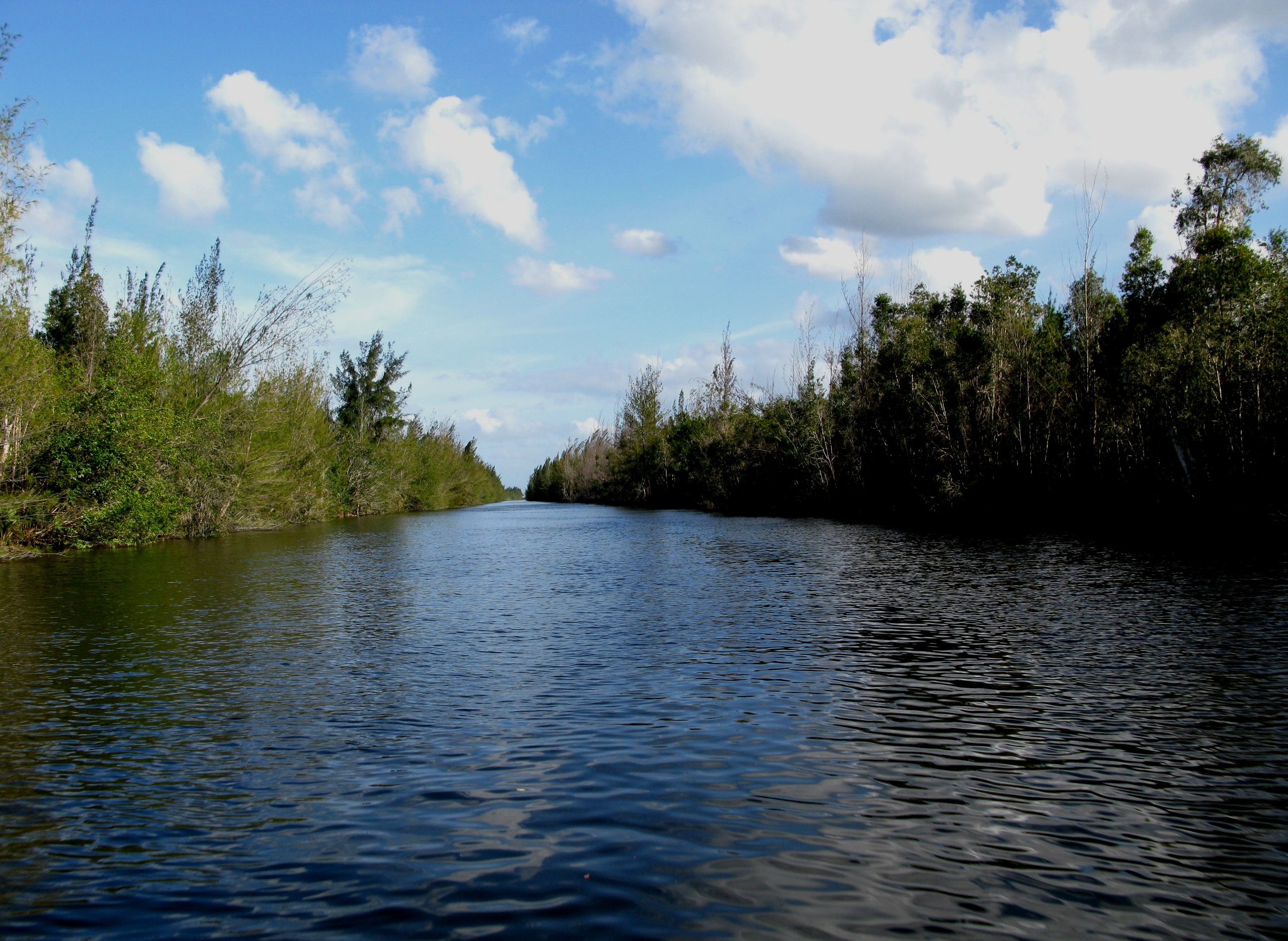 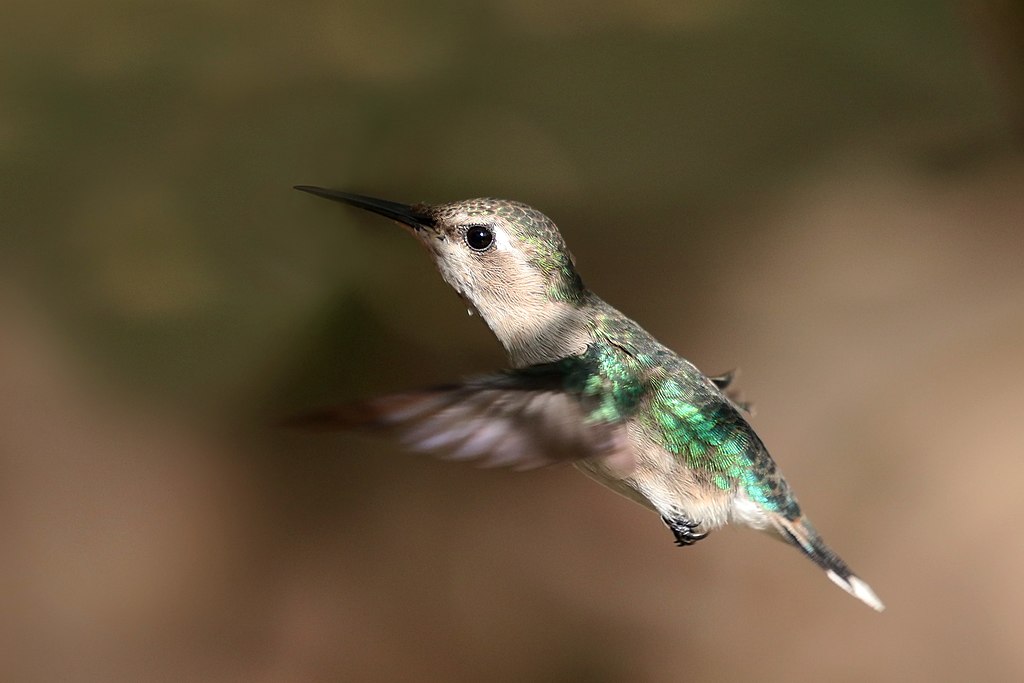 Here in the Zapata marshes,  the smallest known bird has its native home.

This is the beautiful turquoise-feathered 'bee hummingbird', and over 65 species migrate across the island.

Should I stay at Guamá I would choose one of the more remote thatched cabins. 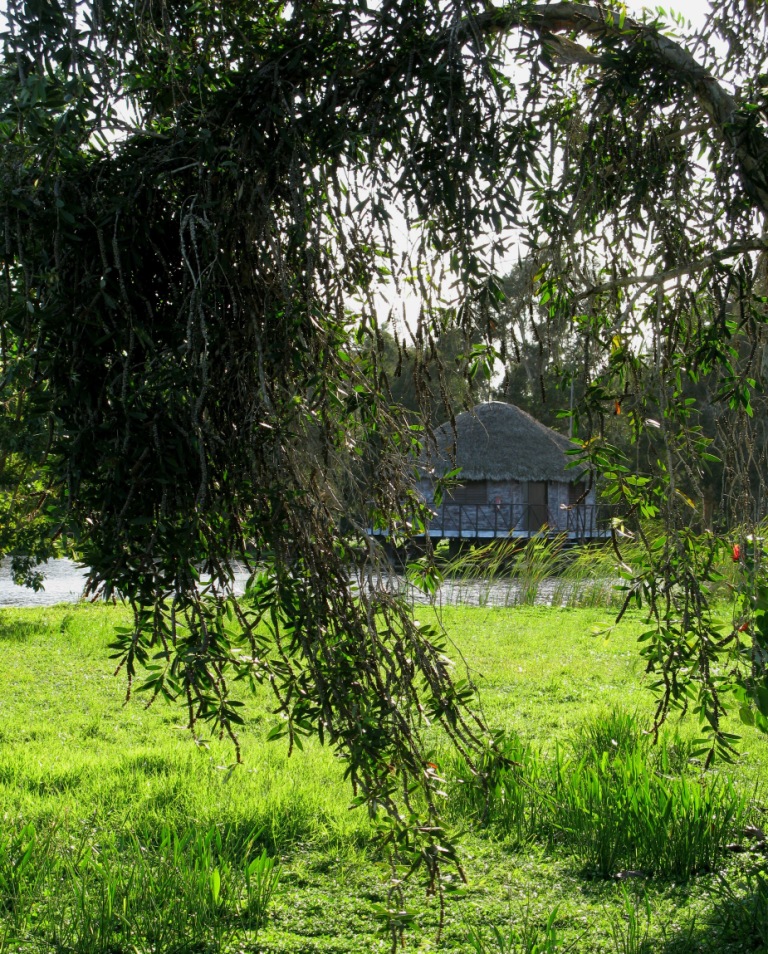 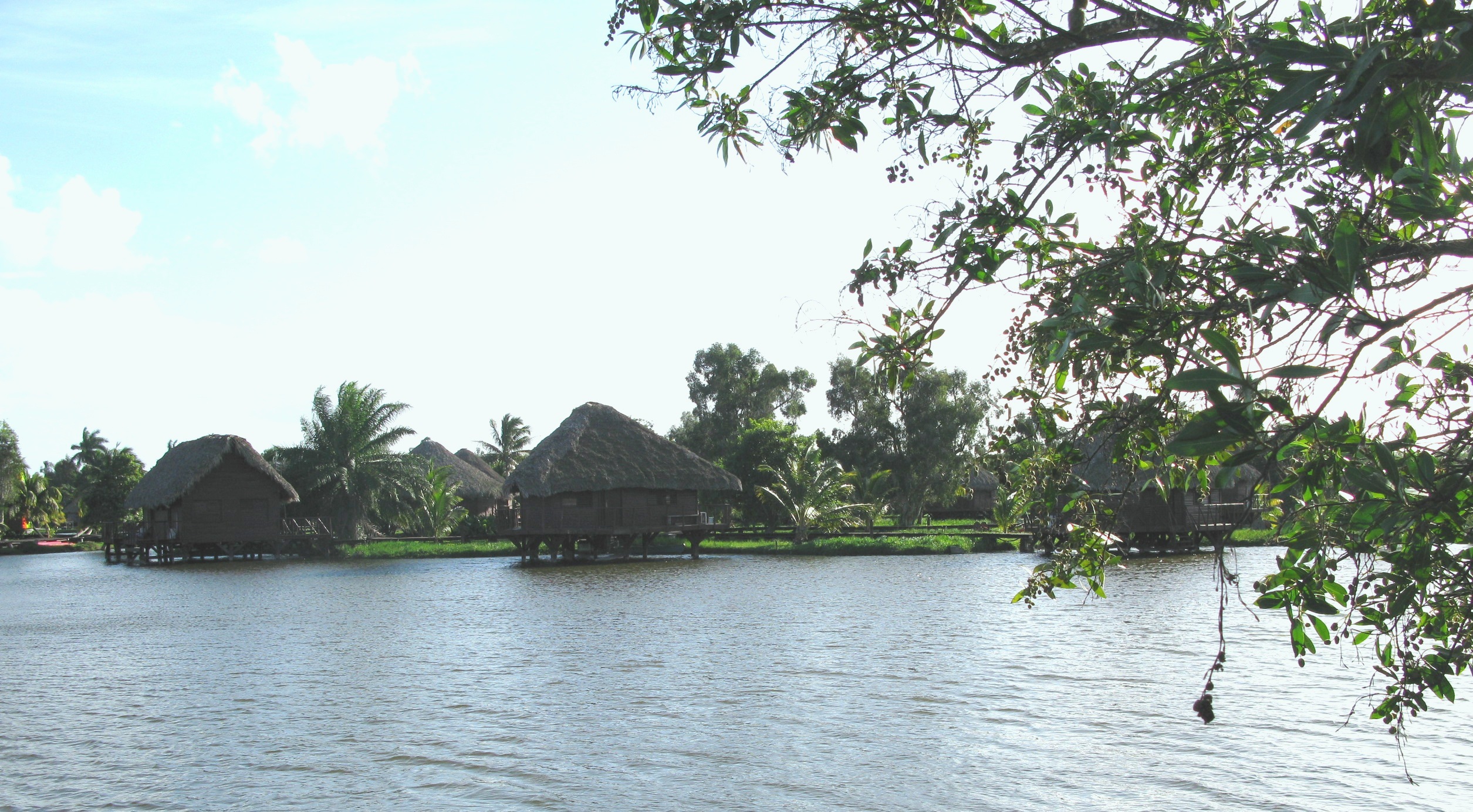 ...and make measured use of the brash commercial bar and ticketing area on the mainland. 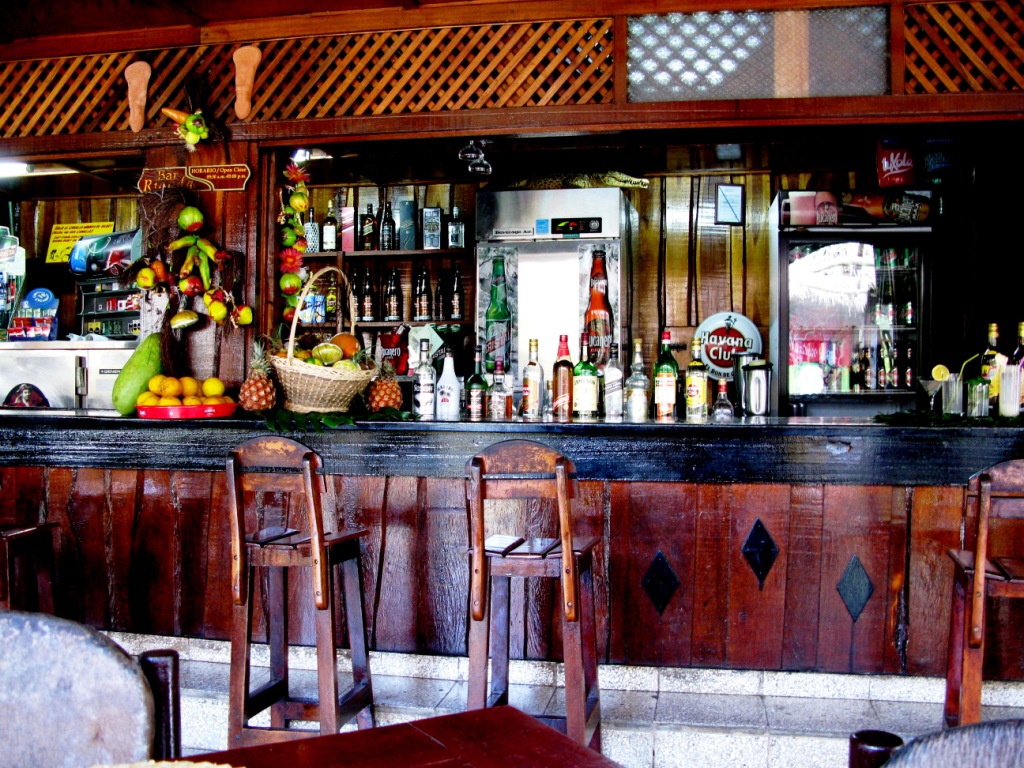 It seeemed somehow fitting that the Guamá trip boat was not to be going far any time soon as its colourful hull sank halfway beneath the lake. 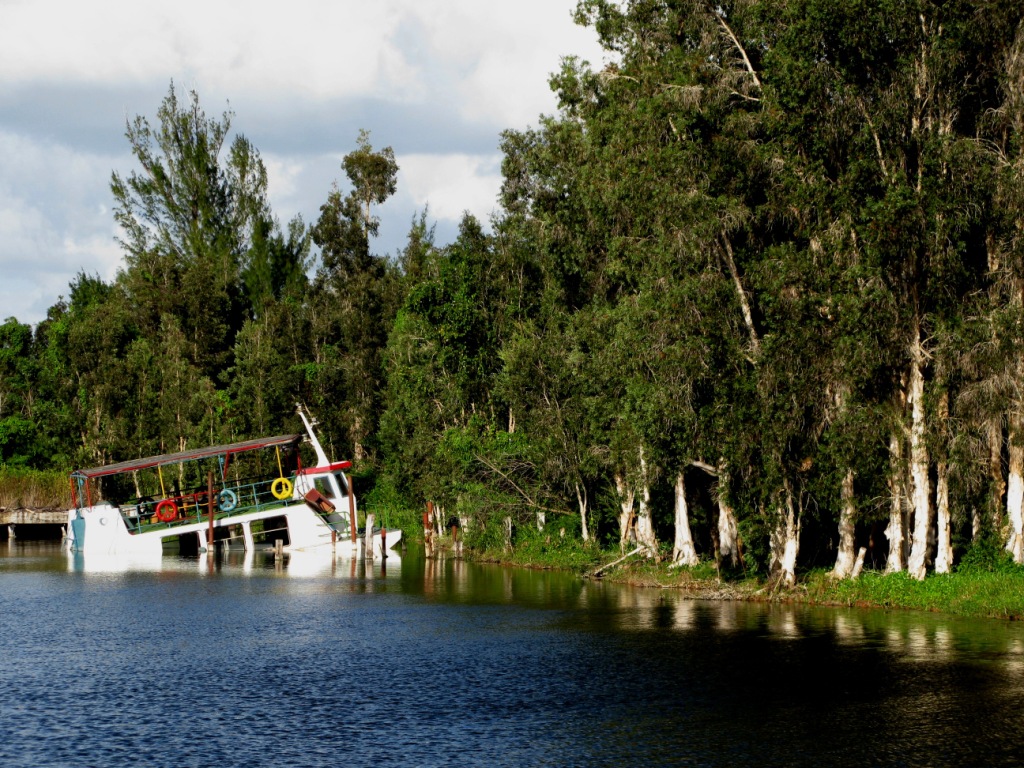 Leaving the resort once again, we seemed to drop back  in what really is a mixed timeframe of an existence in Cuba, with classic cars parked in the car park remembering a different era when hopes were high for the fledgling new government. 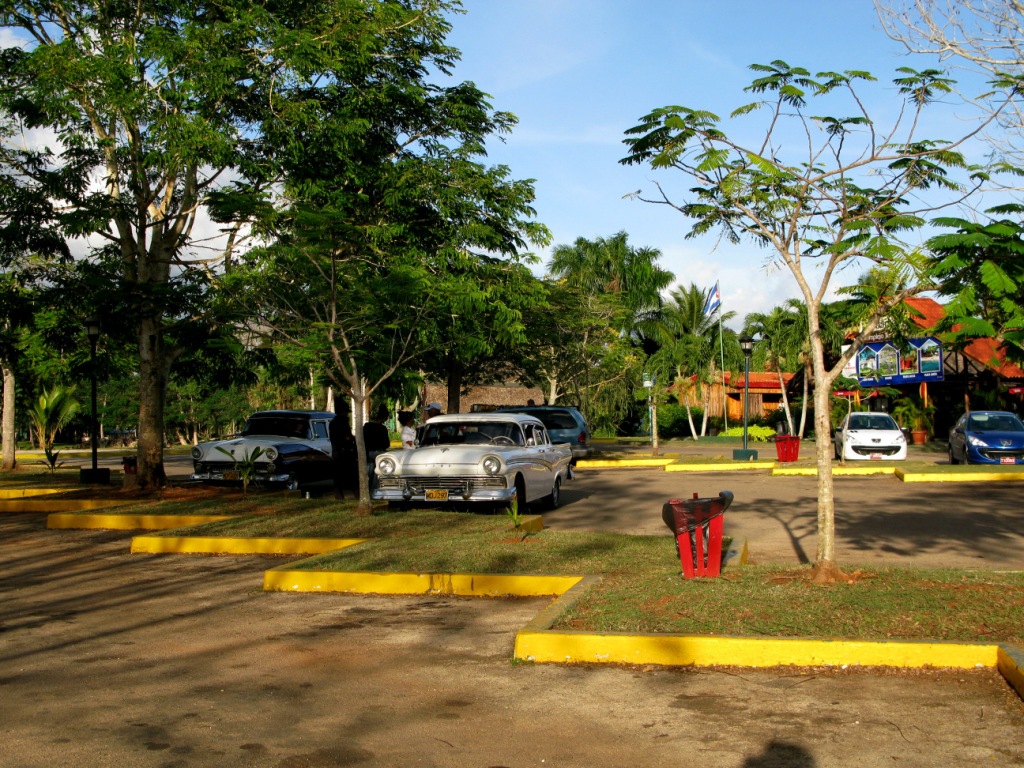 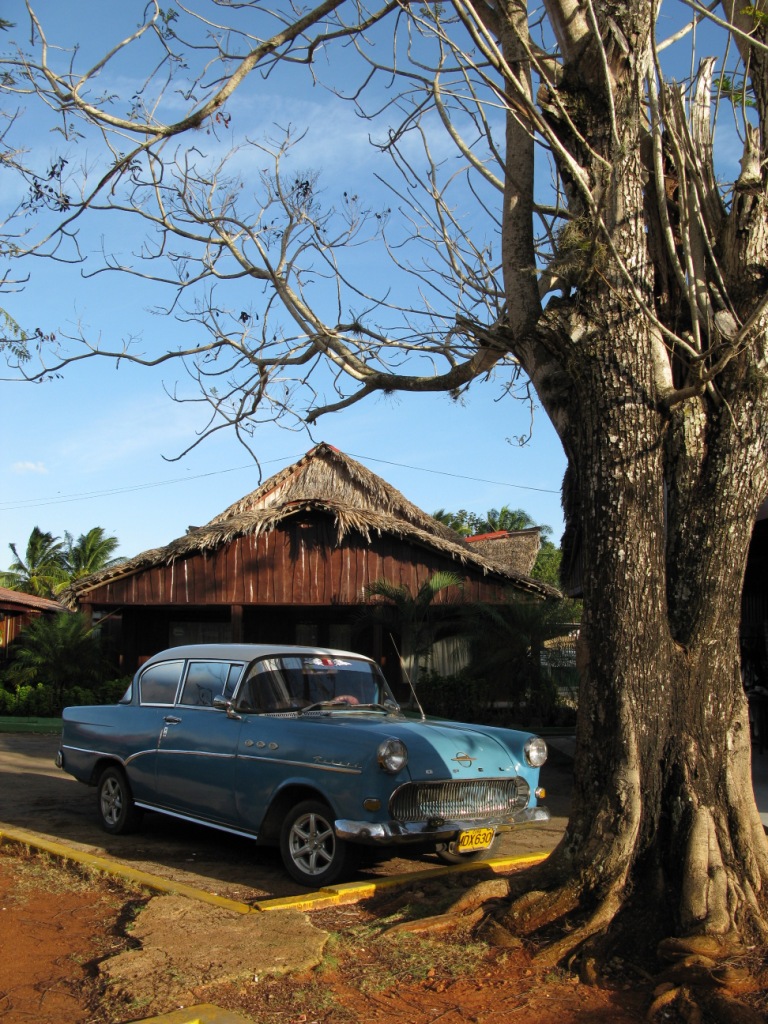 Confucious is reported to have said:

By three methods we may learn wisdom:

First, by reflection, which is noblest;

Second, by imitation, which is easiest; and

Third by experience, which is the bitterest.

It seemed to me that the Guamá resort epitomised all three:

Reflection, on worthy cultural attributes from the past before designing the resort.

Imitation, in trying to recreate the fabric of lost serenity in its style.

Experience, in realising that creation of a future requires much more than stylised images of idealised lifestyles. These stylised images seemed to be decaying along with so much of the island's infrastructure - was it from inattention - or perhaps loss of heart?