The use of travelling is to regulate imagination by reality.

Venice is a dream that is constantly remade with every visit and every exploration.

I don’t quite know what I expected, but arrival into Venice by water at sunset was something more magical than any dream of it could have been.

On my first night it seemed that the angel atop the church of Santa Maria was trumpeting the glories of Venice, and the triumph of waiting to realise your dream. 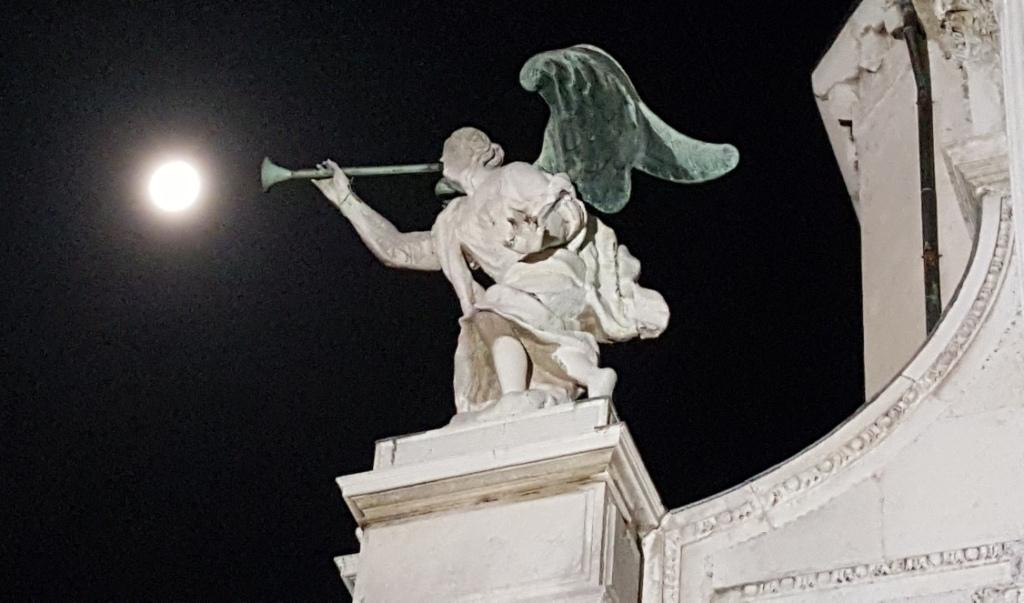 It was as if the heavens had painted the skies with the dreams of so many other travellers.

Golden vapour trails marking their voyages criss-crossed the dusk sky above a bank of sea mist forming thickly, like a waiting shawl about to enfold its lover.

Getting to Venice from Marco Polo Airport - options

The writer Henry James spent a great deal of time enjoying explorations of Italy. He wrote that Venice is best approached by sea.

We took his advice.

Having done so, I believe it to be correct advice, but I guess it depends on your sense of adventure and romance.

There are other options than arriving by water – but why would you come by land to a city on the water?

You may have your reasons, and it doesn't matter how: getting to the city is the key to unlocking the delights of its passageways, its piazzas and bridges, and its incredible beauty.

However you travel, you will arrive to a location about 13km away (8 miles).

So what are the options?

From Marco Polo airport by bus

The ATVO Bus (blue) runs every 30 mins – non-stop and takes 20 minutes. Tickets in 2019  cost 8 euros. Buy online beforehand or at the automatic ticket machine at the bus stop at either end of the trip. Luggage goes underneath the passenger shell of the bus.

The ACTV Bus Line Number 5 (also blue) every 15 minutes, in 2019 also costs 8 euros one way (25 minutes) or 15 round trip. Tickets similarly available at machines both ends –  and carry your luggage on board.

From Marco Polo airport:train or taxi

It is possible to do but to me makes no sense beacuse you travel from the airport to Mestre train station to take another train. The firstw ill only cost 3 euros and the short train ride for one euro to Santa Lucia Train Station.

Taxi si the fastest and will cost 50 euors including baggage and deposit you in Piazzale Roma - or elsewhere depending upon possibilities to do. so.

But is you really must be there fast: at least this does bring you by water to the city whose life is defined by its islands.

You can lower the 120 euro fare by sharing.

Prebook a water taxi here: the luxury service or regular - either taking 30-35 minutes and providing a 'Meet and Greet' with your name held on a board as you exit the arrival lounge. They even transport you the 5 minute walk distance from terminal to ferry in a minivan.

Not in a hurry?

Still got a sense of adventure that won't have you panic as you see all the different coloured water transport and wonder which is yours?

You are in Venice dahling, dahling!

Alilaguna Water Bus in 2019 costs 15 euros or 27 round trip (and worth every euro cent). You will enjoy soaking in the sights over the hour and fifteen minutes of the trip.

The water bus or motoscafi has a passenger cabin fore and aft that is deeper in the hull than those of the Vaporetti that ply the Venice canals. This type of water bus is also used on the rougher waters en route to

Here is the tricky bit:There are three lines to choose from: Red, Green or Orange - each having different stops en route. Check where your hotel is and choose from there. We took Orange.

The timetable can be downloaded here.

Be aware: The Tourist Travel Card that offers unlimited boat travel for between 12 hours to 7 days and shrinks the outrageously expensive tourist price for water transport locally, does NOT cover the Airport route. The Tourist Travel Card is a great investment and can be purchased at any ticket kiosk or online from here. The map of all water bus routes can be downloaded here.

The red buildings announcing the island of Morano are the first to greet you as you approach Venice. 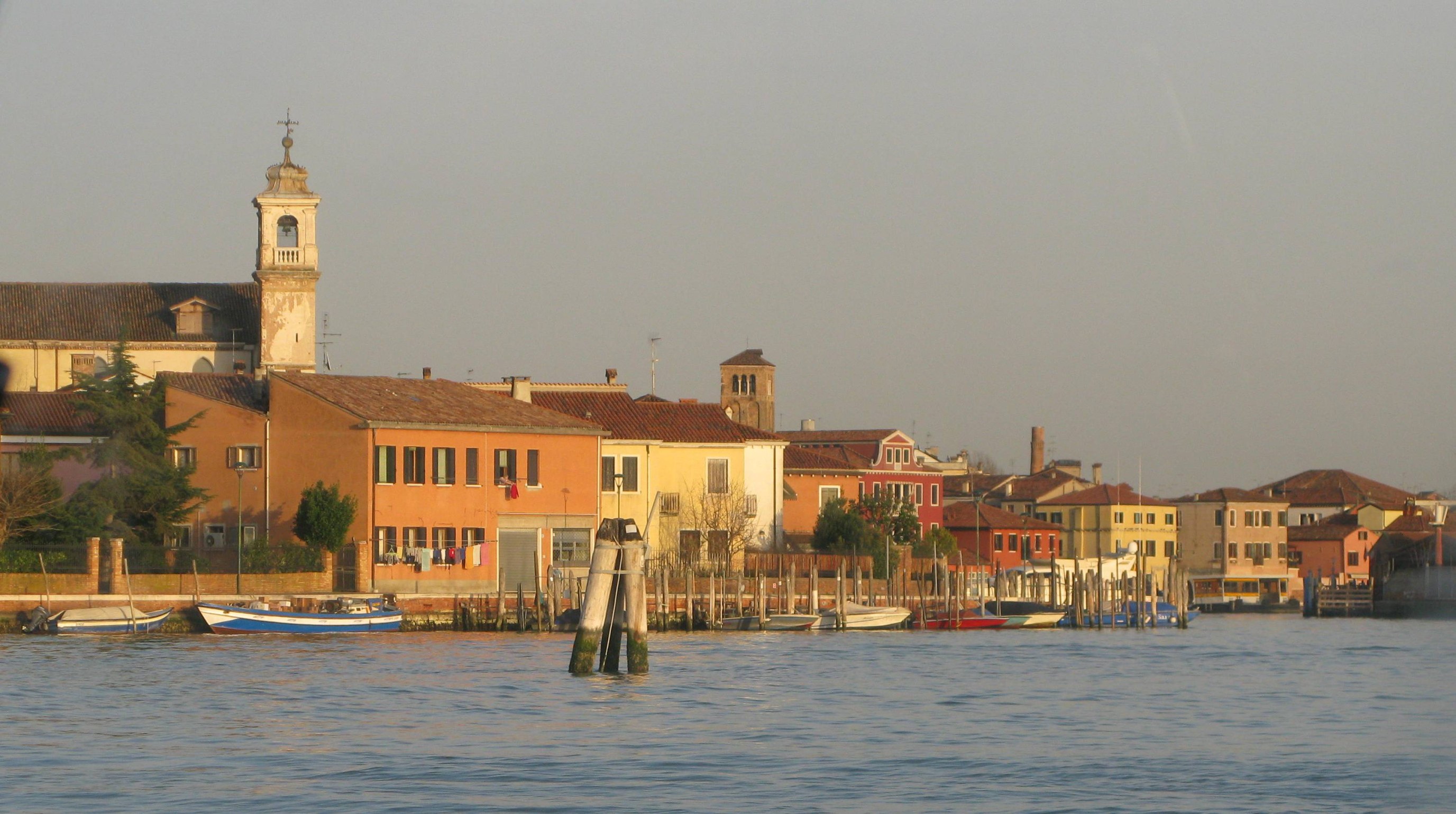 As the sun dips below the waterline of the horizon, the buildings of the approaching islands seem carved out of the sky, their outline is so precise. 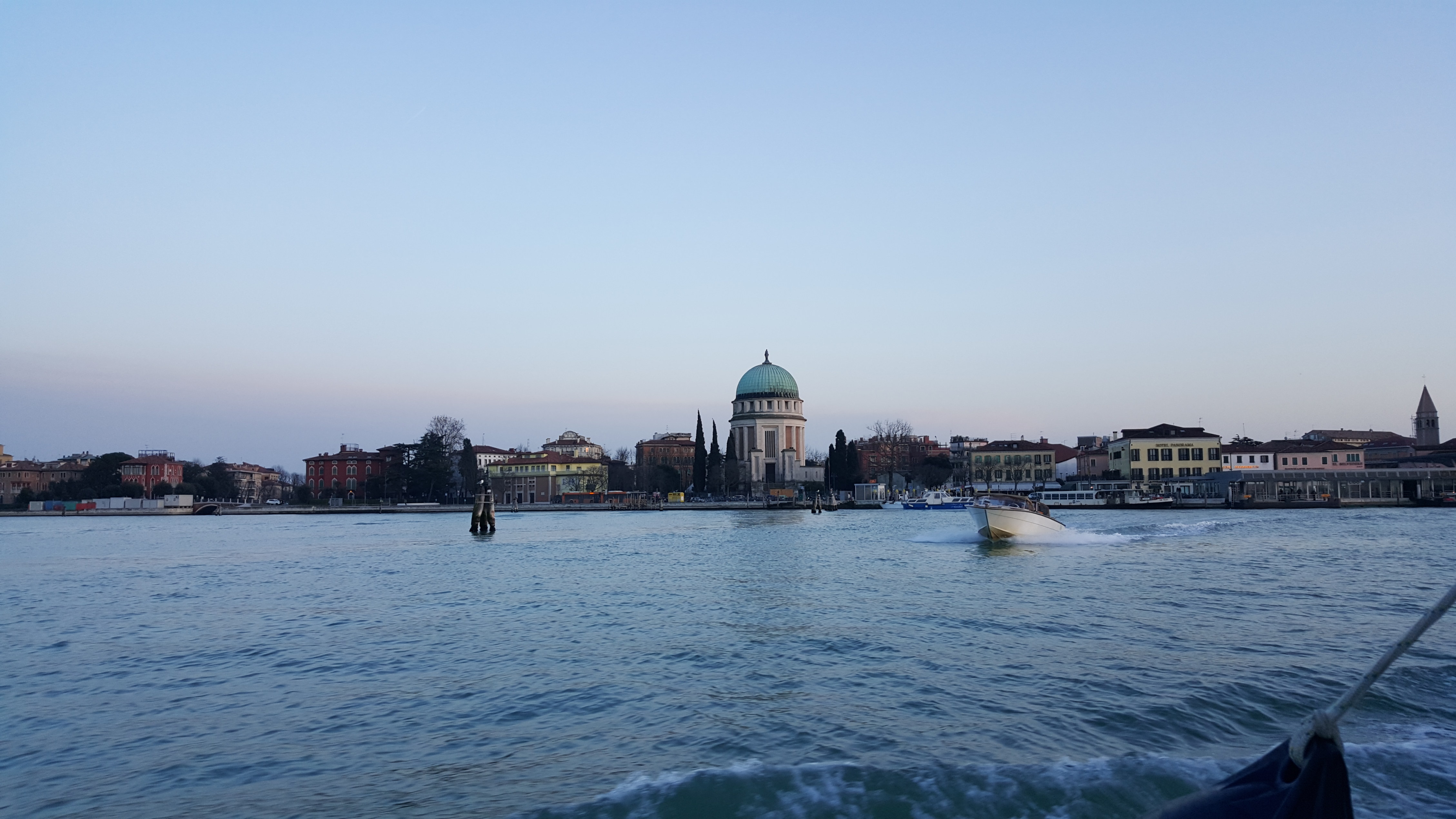 As we approached the Lido, the green dome of Tempio Votivo,the Venice War Memorial, was easily recognisable.

At first this was a church of thanks for the fact that Venice was spared irrepairable bombardment in WWI. It was only later that this became a tribute to those who lost their lives in two world wars and in the more recent battles in the former Jugosvlavia.

Perhaps it is just as well. After his death the project was the responsibiility of an engineer and not an architect:Umberto Fantucci.

Gone is the light that should have filtered through windows in the dome's outer ring - lost when built in reinforced concrete without windows.

The Tempio Votivo we see now was built devoid of the religious imagery of its early design.

Torres was a thoughtful architect. Following the earthquakes in Messina in 1908, he designed seismic-activity-resistant round buildings for the reconstruction, but his designs were not accepted.

Sad that this one that was, never resulted in the airy building he intended. 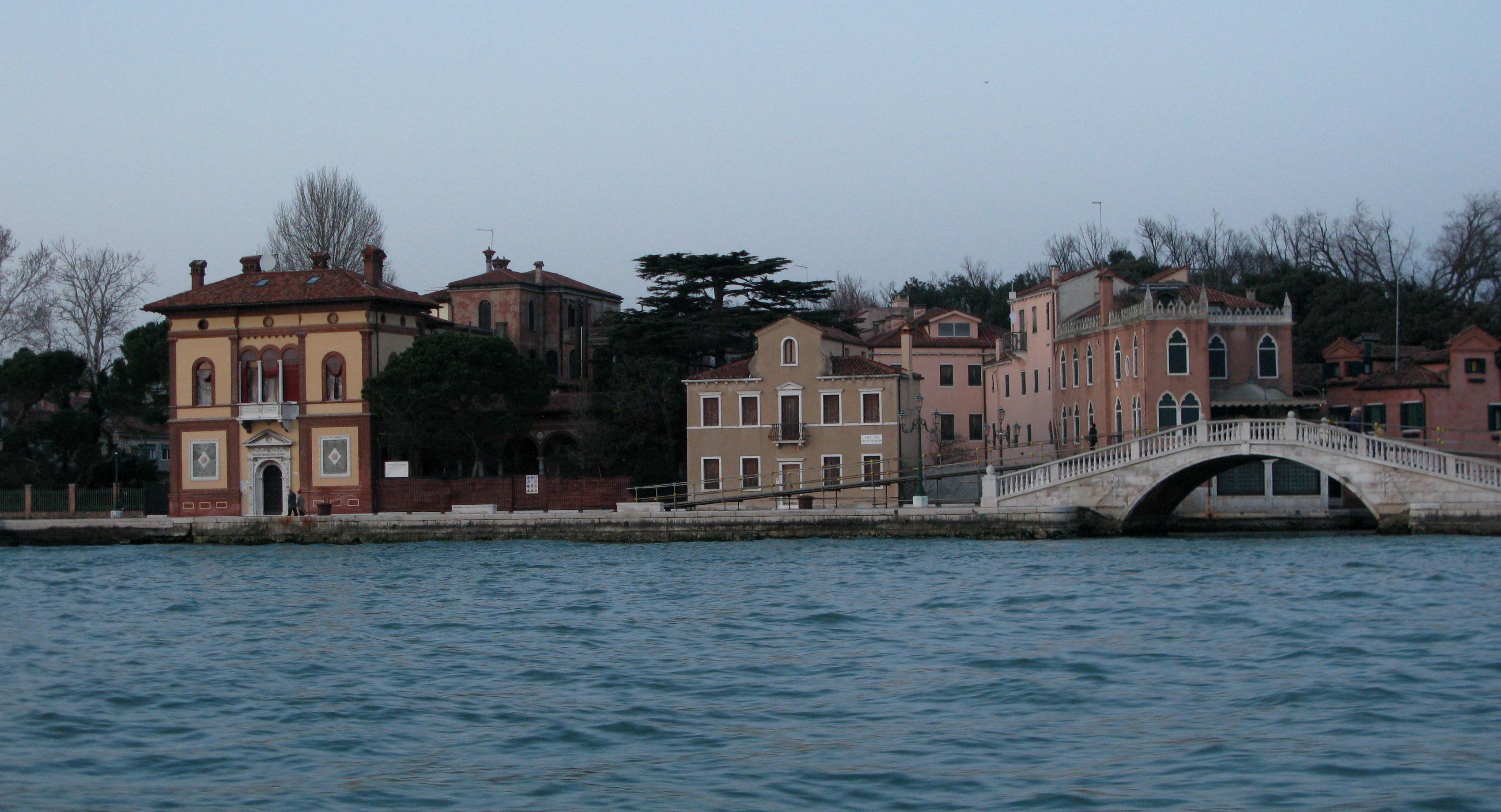 Sunset is a wonderful opportunity for us to appreciate all the great things the sun gives us.
Mehmet Murat

Some trips are better talked about with the eyes.

These photos will help you soak up the magic of arriving by water via the long route to Venice from Marco Polo Airport by Aligaluna water bus.

We had our first view of the church of San Michel di Isola - the cemetery island of Venice. 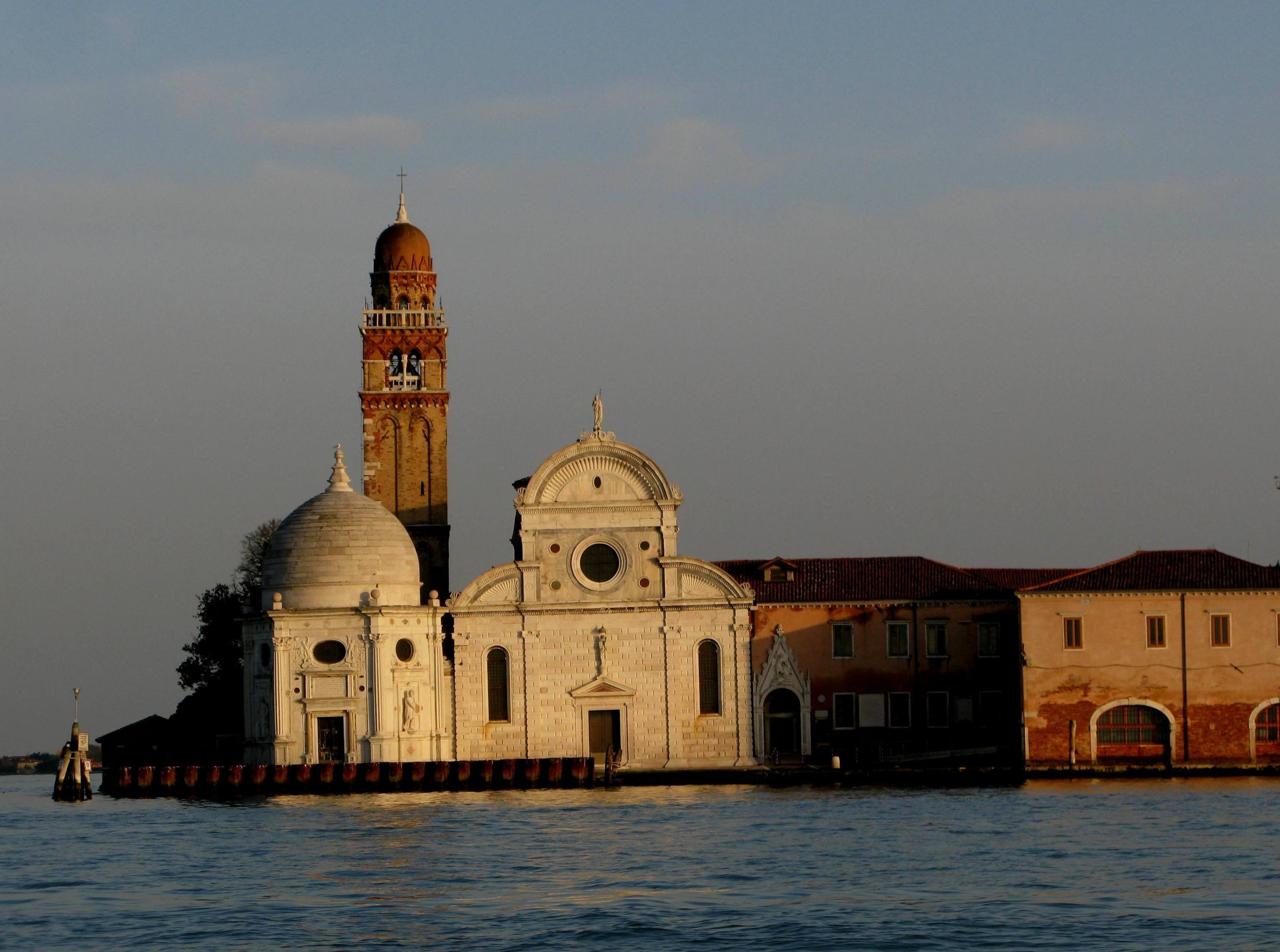 A grey sea mist seemed to be following us as the day drew in.

The moon was already pale in the sky above the graveyard of Venice as we departed. 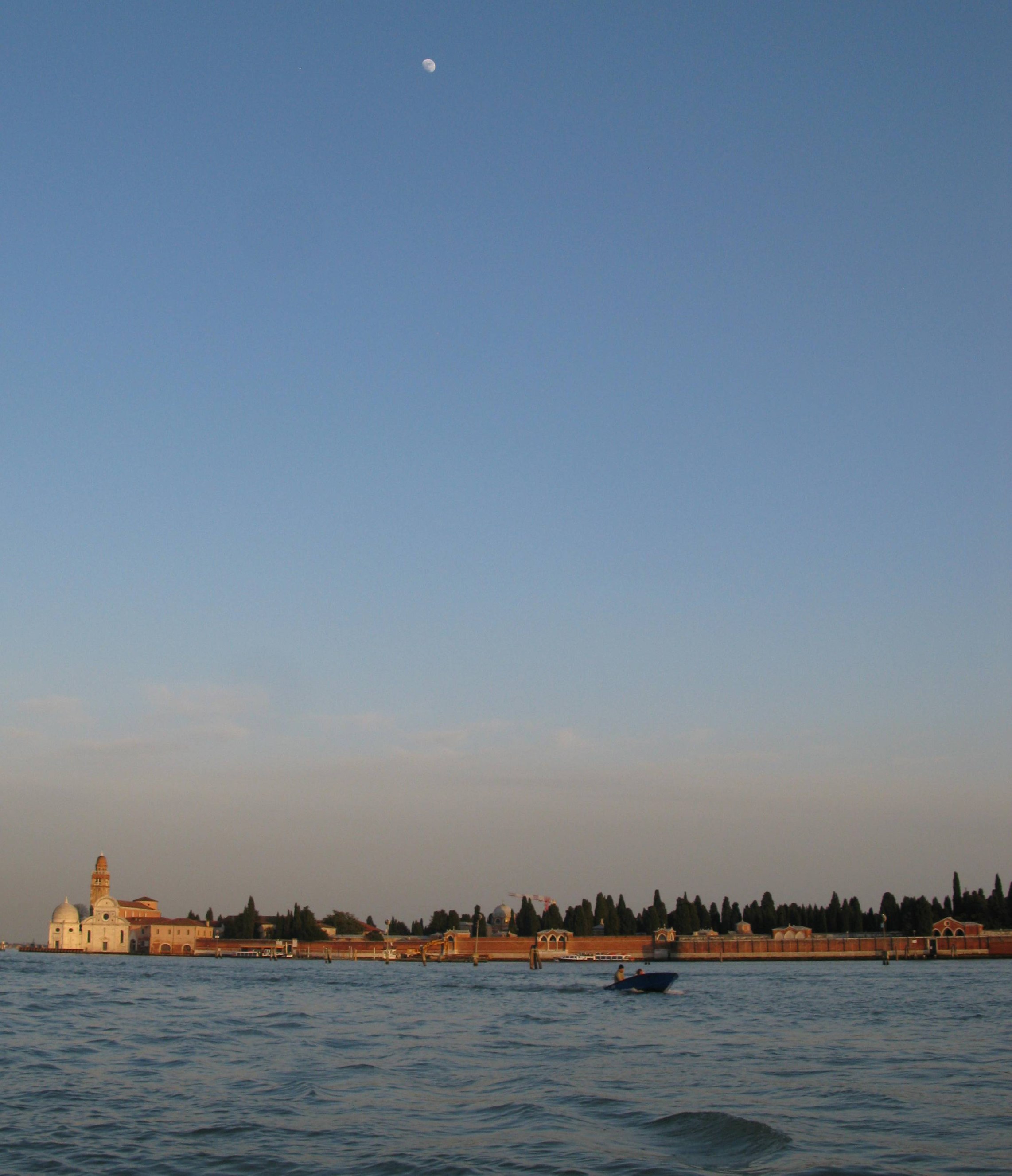 It is a wonderful last trip to make - across the waters to the burial island of Venice.

It was just such a trip that was the last one made by many famous Italians, and also by Igor Stravinsky, Jean Schlumberger, Sergei Diaghilev, and Ezra Pound, who all now rest here. 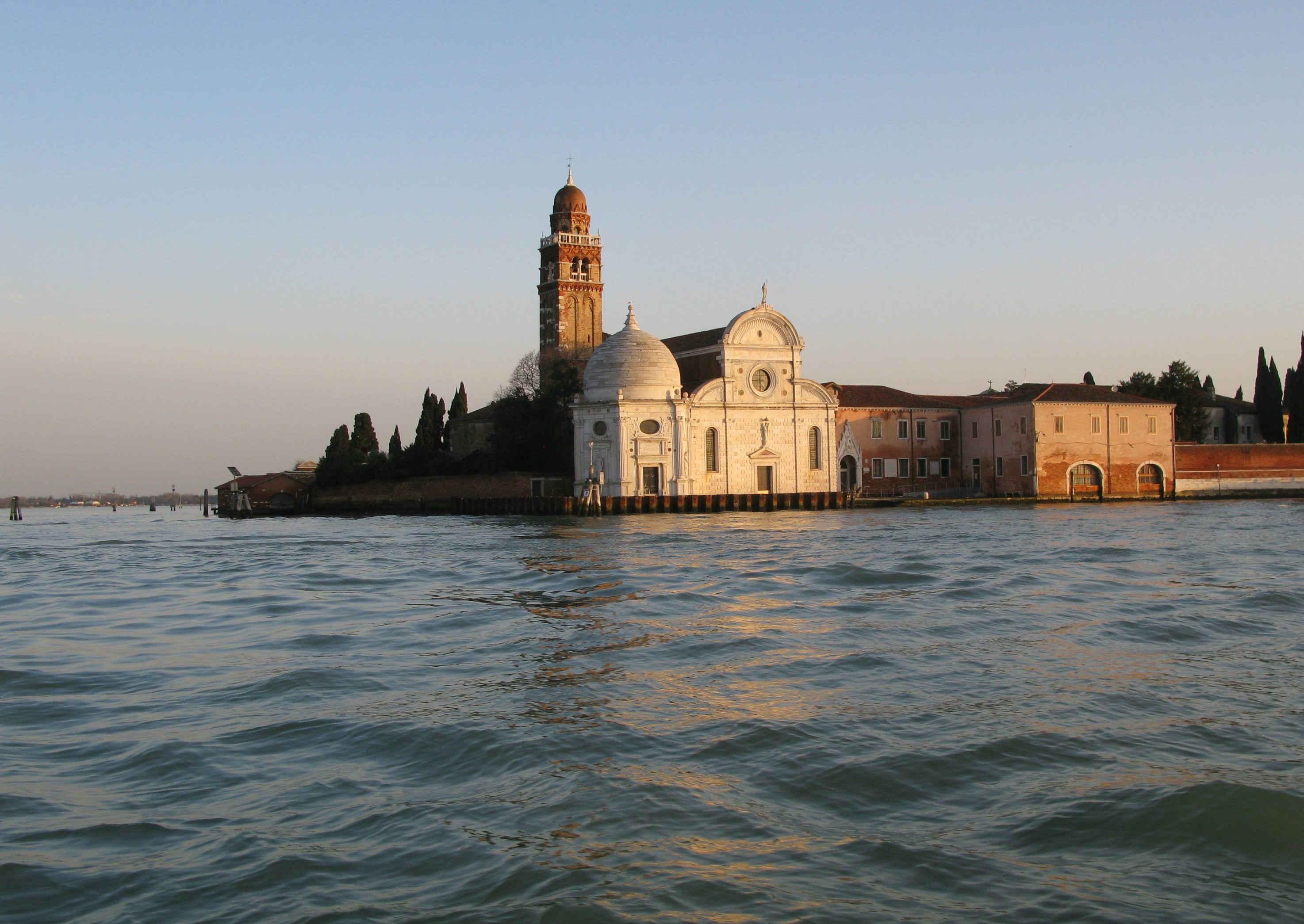 As we drew closer to the I Gesuita, the Jesuit church of Santa Maria Assunta, the great cross shaped brick building was just being tinted by the last colours of the day.

It sits at the end of the Grand Canal in the district that ahs the largest population in Venice. 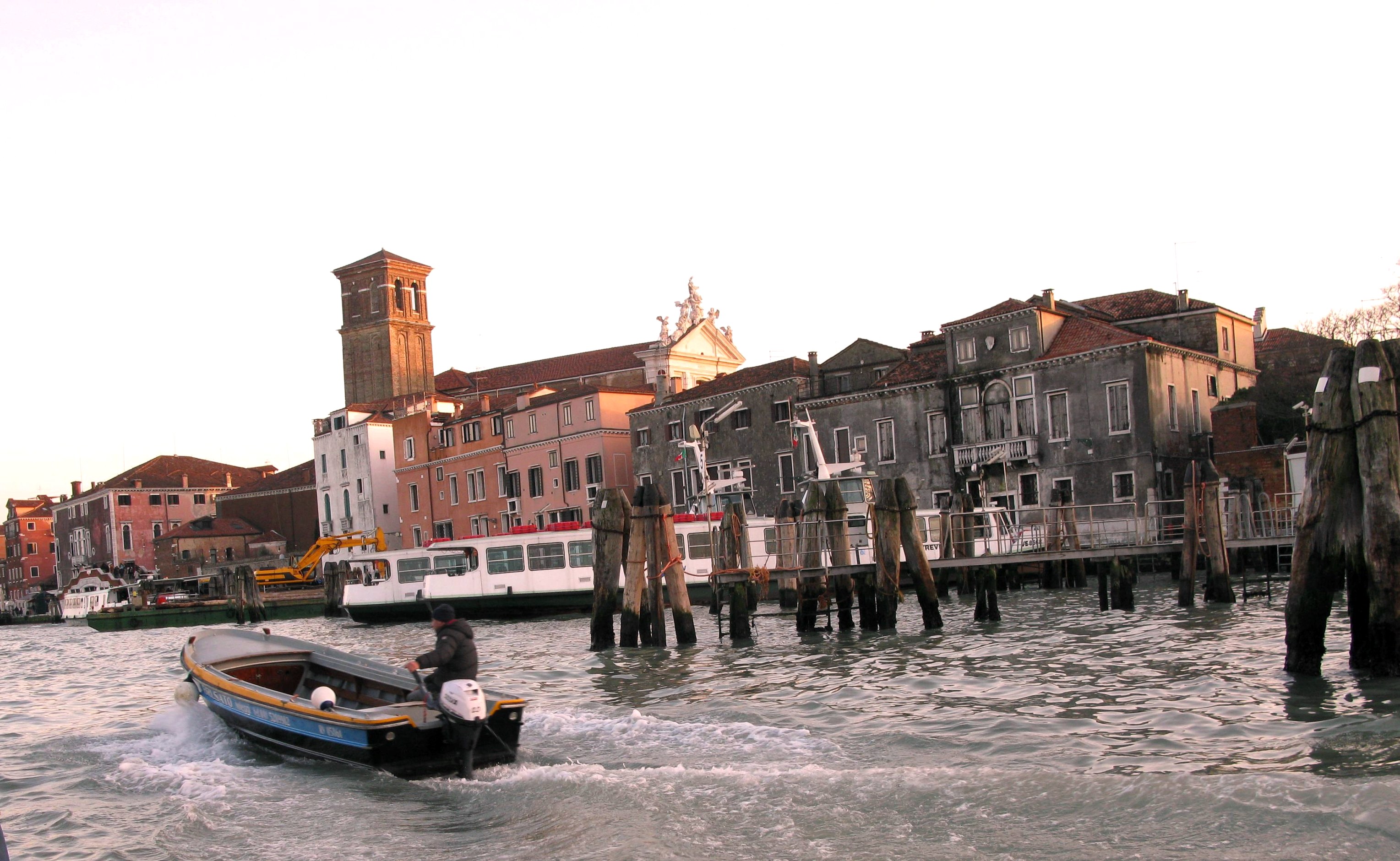 Saint Ignatius of Loyola first came to Venice en route in pilgrimage to Jerusalem in 1523. The following year he returned with some friends, who called themsleves the Society of Jesus - Jesuits. In only two years they had developed a large following and they left for Rome in 1537. This is not the original church, which was considered not big enough, and this new one was consecrated in 1728.

In the soft rose colours of twilight the Assumption of the Virgin Mary atop the facade etched the details of the angels with shadow. 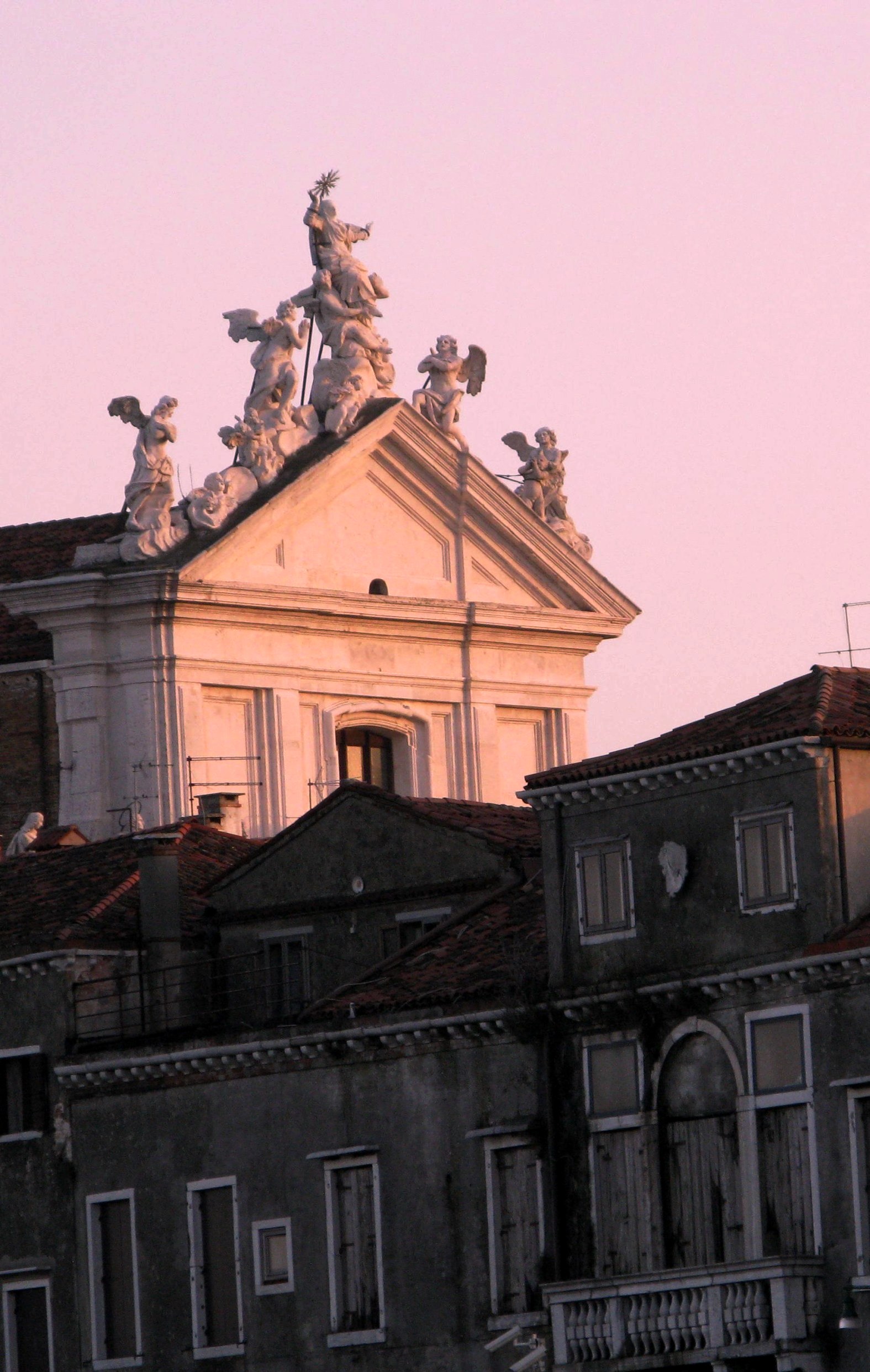 Venice is a remarkably dog-friendly place

One of the furry locals on the airport ferry boarded with the noncholance of a regular. 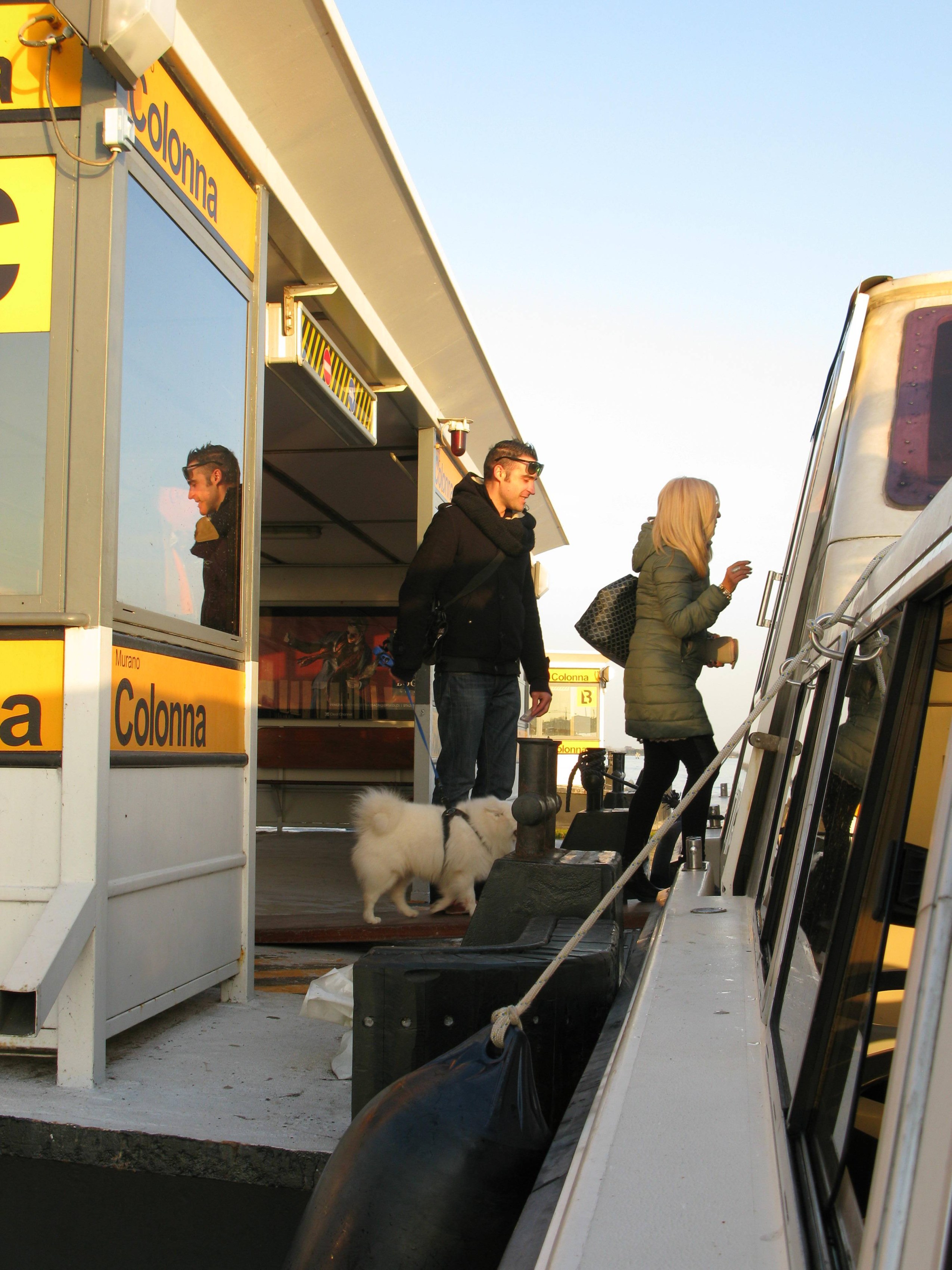 Another - a long-haired dachshund was in his in-flight carrier bag and only vaguely curious about his fellow passengers. 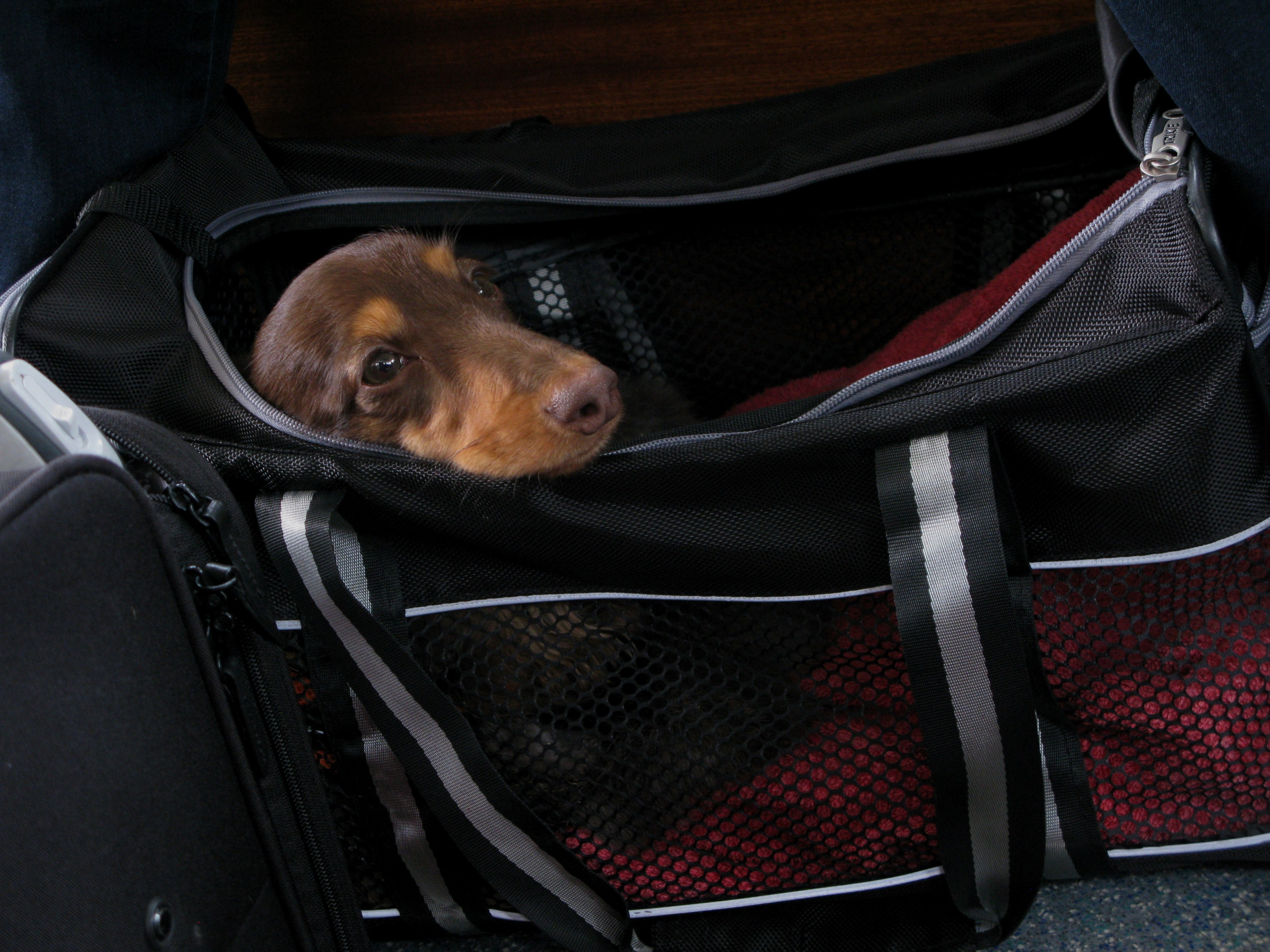 On the walkway Riva Degli Schiavoni, just two bridges east of San Marco Square and the Doge's Palace, Vittorio Emanuele II - the Father of Italy - who appears in so many Italian cities, raised his sword. 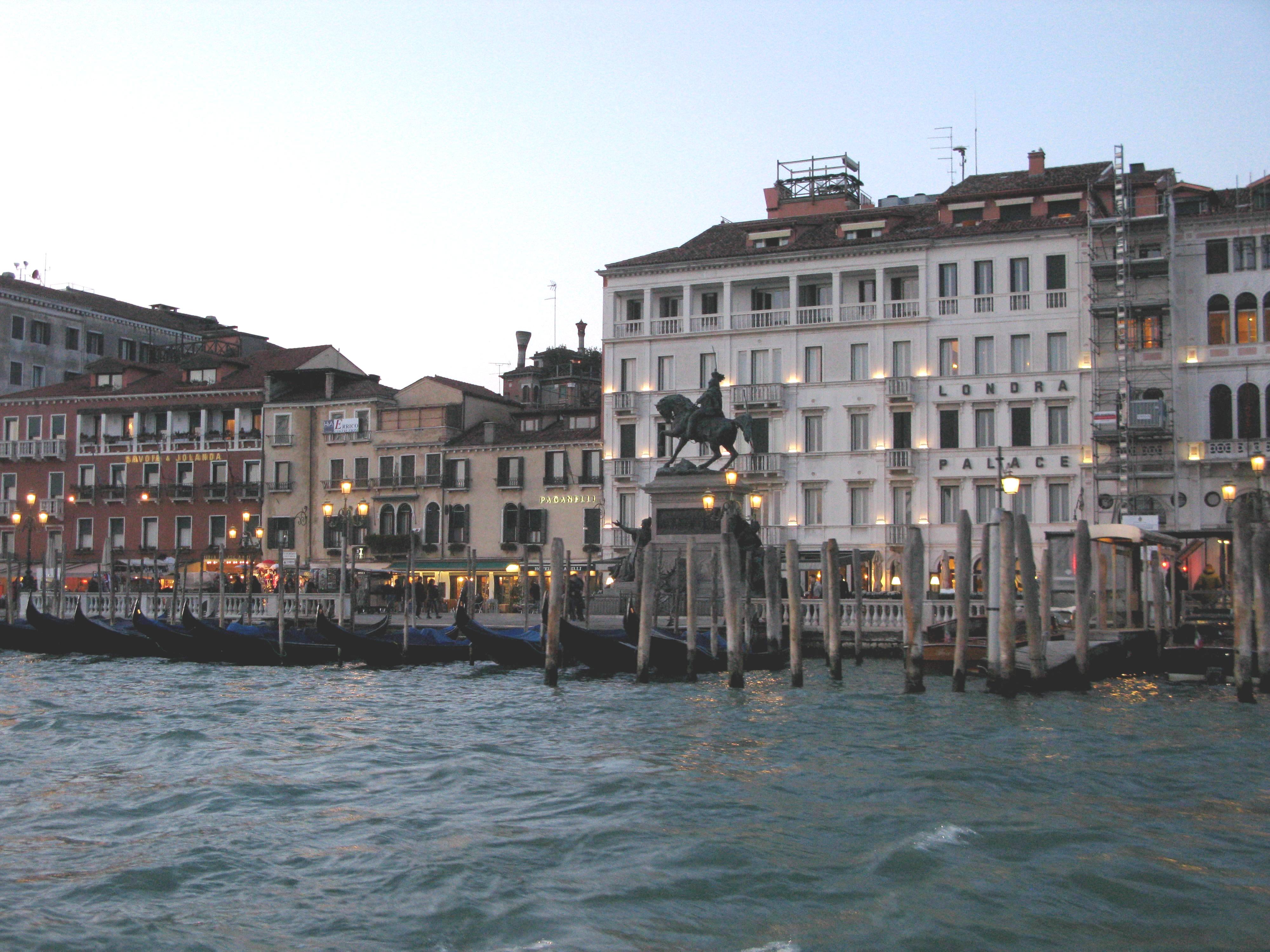 Later, I would find that the cluster of souvenir stands on the shore side of the statue meant that this was definitely the best view - here from the water and flanked by gondolas. 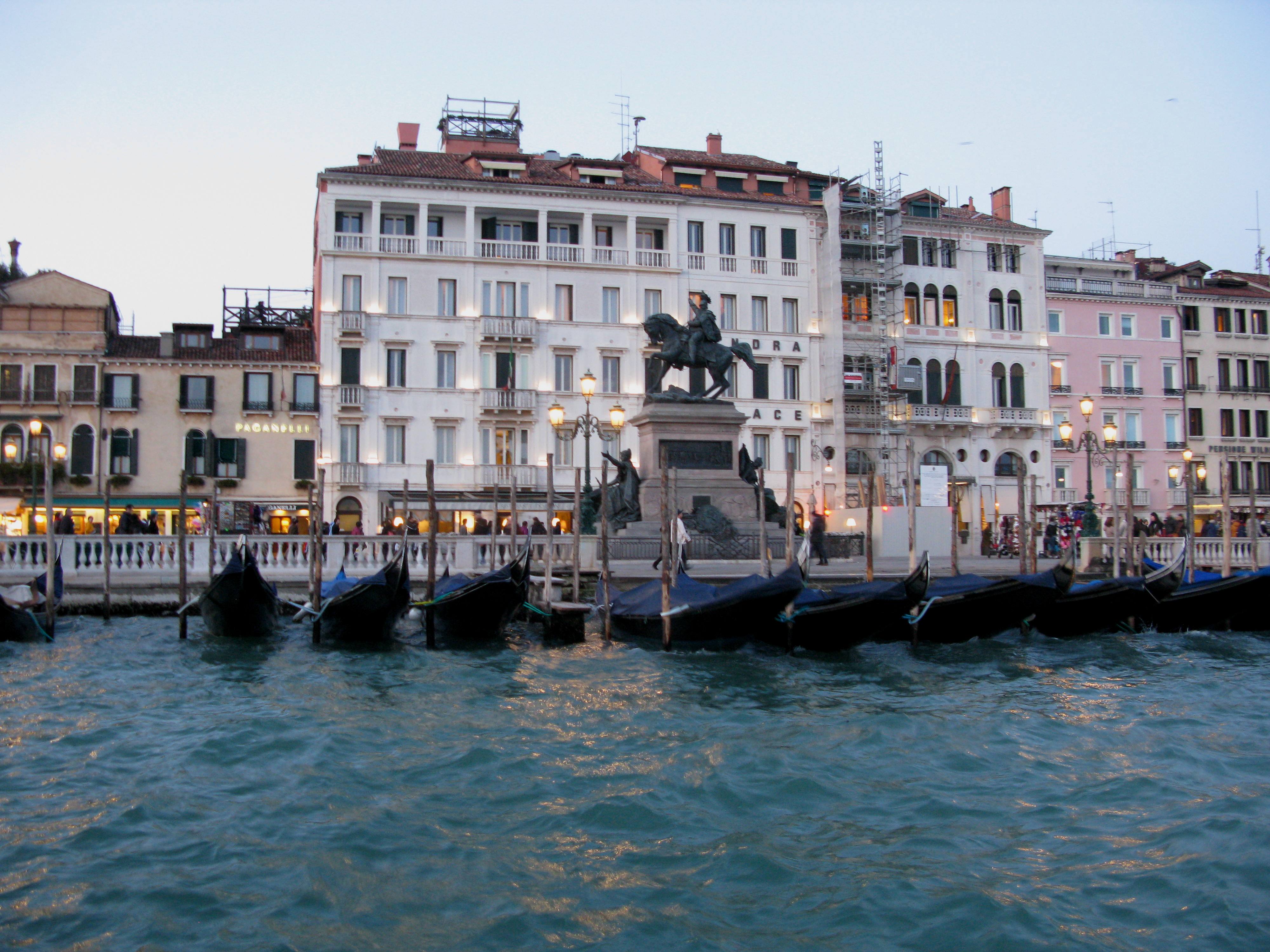 Until at last - San Marcos welcomed us. 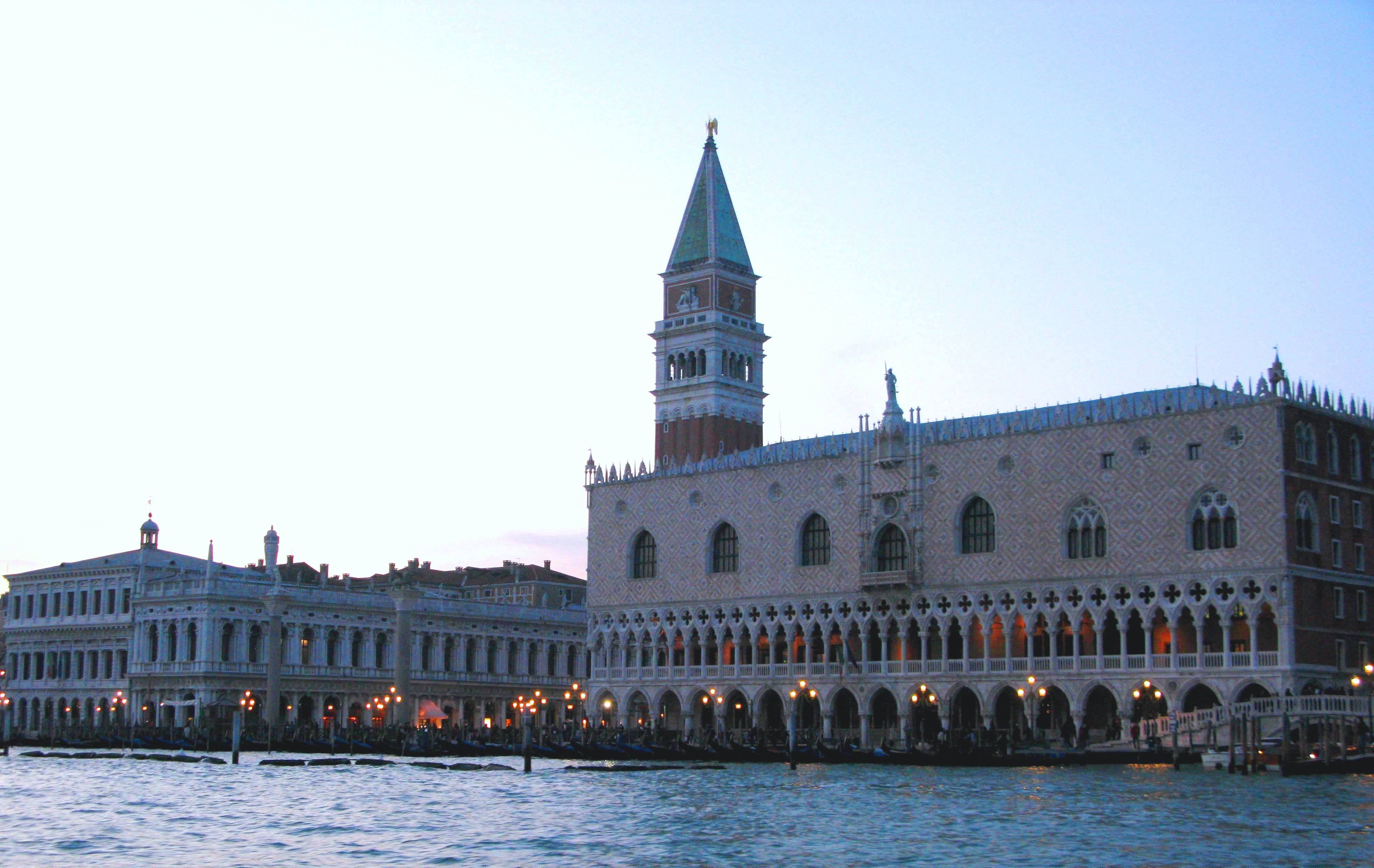 As we crept to the dockside, our waterside entry to Venice was marked by a wonderful first image of the whole famous square of San Marco. 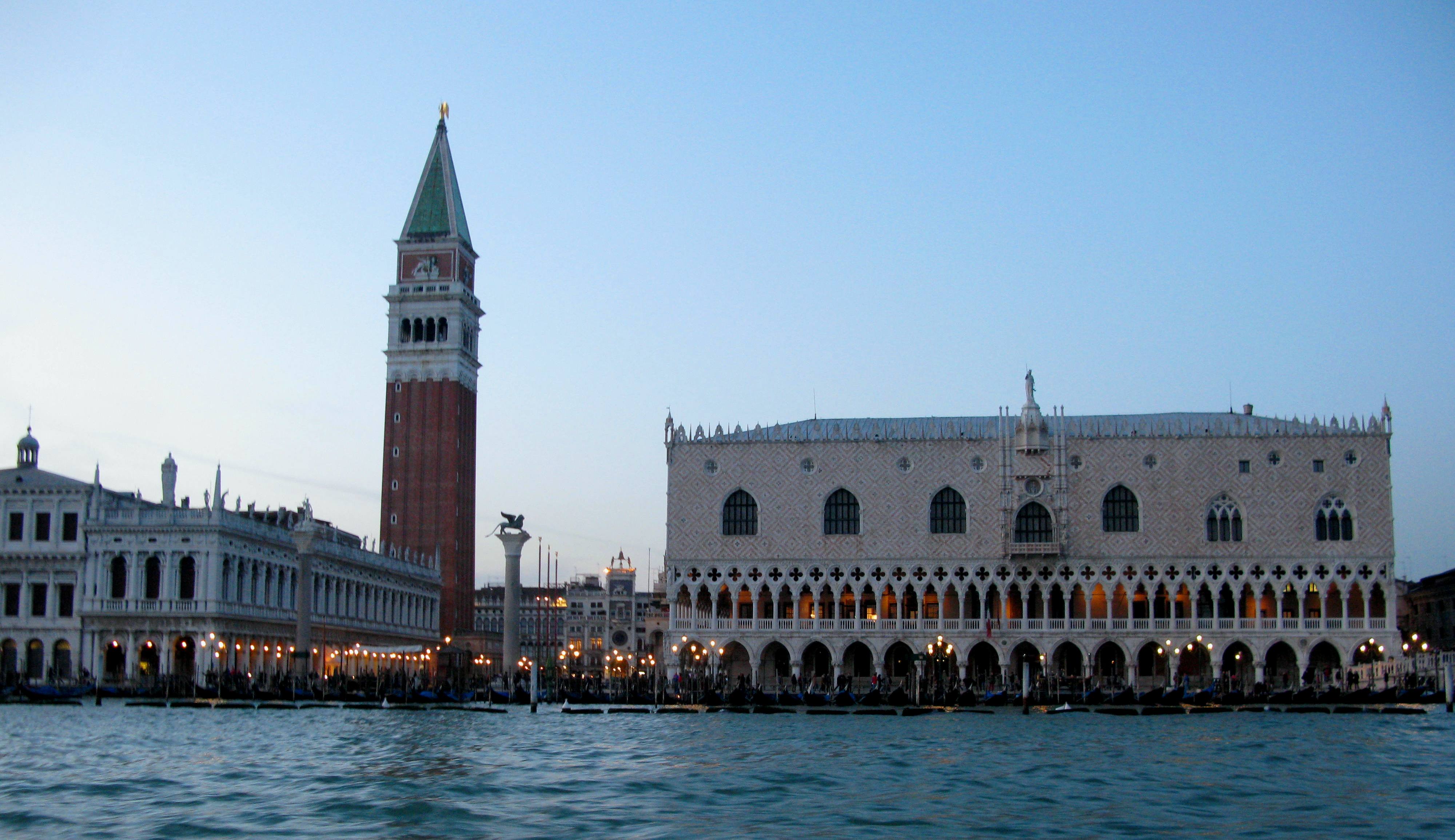 It was just as Shelley had written:

It’s temples and palaces did seem like fabrics of enchantment piled to heaven.