This Havana demonstration was one of the most interesting events I have ever seen.

The people were massed to march along the Malecón.

The preparation of a 'spontaneous' Havana street demonstration 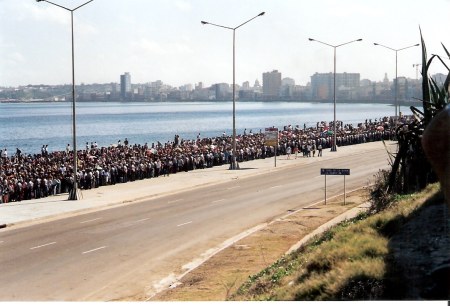 It was a spectacle worth seeing. The organisation was like a military manoeuvre – which is not surprising I guess.

I asked was this much effort given to hurricane preparation and was assured that it actually was.

Flanked by police, and following a phalanx of flag bearers, the crowd assembled. 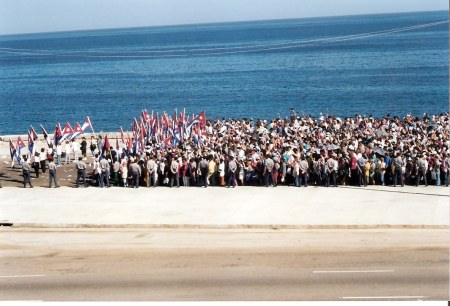 It wasn’t time to start the Havana demonstration yet, so people were busy getting in place. 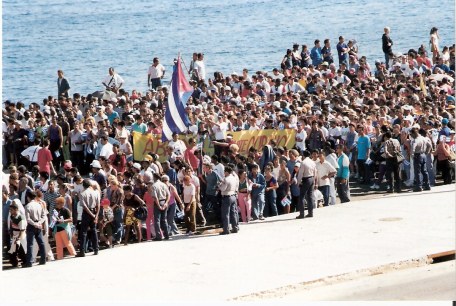 Then came the word to start.

The flag bearers of the Havana demonstration set off on cue 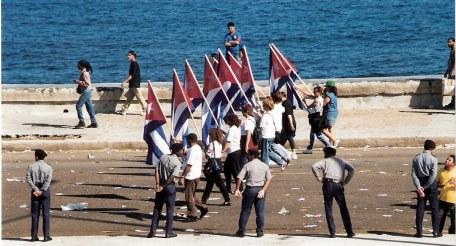 Following them were the massed flags behind which was a muti-ranked, long line of marchers. 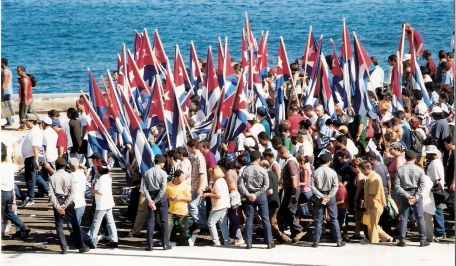 It was really much more a TV spectacular than a demonstration.

Stationary TV cameras were strung from a mobile crane. 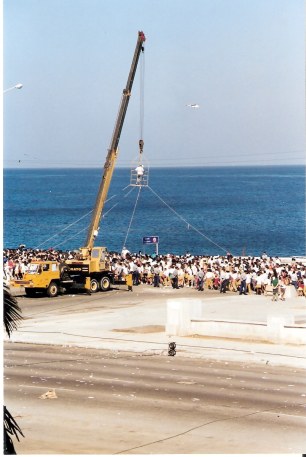 It wasn’t difficult to see the trigger for the Havana demonstration march to start. A TV-reporter-laden news helicopter appeared with a visible
camera hung below. 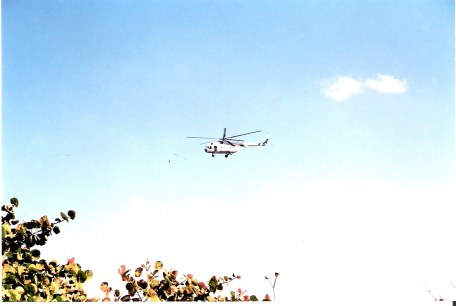 This is why the marchers were massed into a narrow band along the Malecón. The way this was filmed would give the impression of more density.

An uncontrolled demonstration would have filled the lanes now closed to traffic for the event.

The whole spectacle was overlooked by tourists from the lawns of the Hotel Nacional. 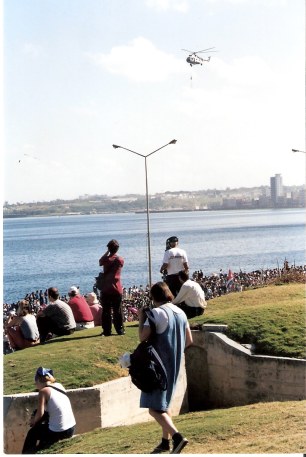 A little 'sound enhancement' for the Havana street demonstration

Walking along the other side of the Malecón from that of the massed demonstrators, I saw water trucks parked with mounted loudspeaker systems projecting sounds of enthusiastic crowds shouting slogans.

This is the sound system that formed the backdrop to the images later seen on TV news shows worldwide.

My friends told me that everyone was so tired of these Havana demonstrations that they walk and chat with their friends and only every now can they be enticed to utter an unenthusiastic cheer.

Capitalism flourishes at a street demonstration against capitalism

I found the whole atmosphere on the streets more like that of fiesta than a demo.

This was a Havana demonstration that was against capitalism, yet everywhere capitalism was flourishing. Street vendors sold craft, food, and drinks, but very little to do with the demonstration itself.

Participants generally saw it as just a day off on the Malecón.

As I pondered the differences between Capitalism and Socialism,I thought of the Polish saying:

but under Socialism, the reverse is true.