Viewed at its best from the Eiffel Tower, the 'new' Trocadéro draws you across the Seine 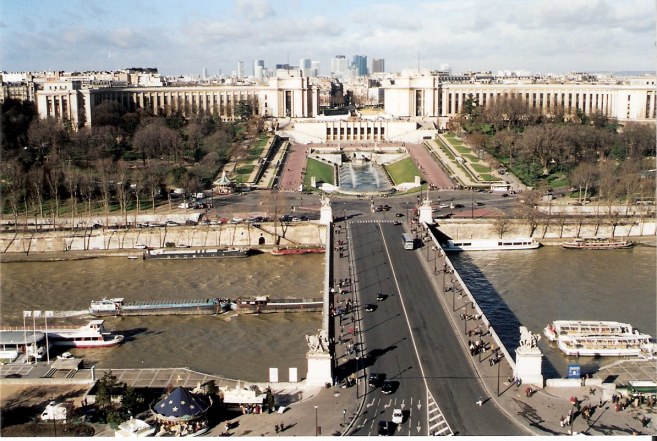 One of the best frames for viewing the Eiffel Tower is from a distance on the other side of the Seine at Trocadéro, beneath the golden limestone buildings of the Palais de Chaillot.

Louis XVIII had proposed that a villa be built on this hill in Chaillot, which was just a village at the time. The name Trocadéro was intended to commemorate the victory of the Duc d'Angoulême, son of the future king, in capturing the town of Trocadero, Spain, in 1823.

Although the villa was never built, the name has remained.

In turn, the Eiffel Tower from
Trocadéro lures you again across the Seine in the other direction

The view in the other direction - back at the Eiffel Tower from Trocadéro, is just as spectacular. 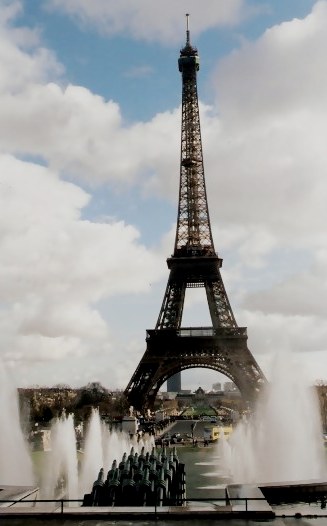 The legacy of a Great Exposition: Trocadéro gardens

The Great Expositions of the past have left us many gifts.

One such is the Jardin du Trocadéro, constructed by Jean Charles Alphand to accent the oriental Trocadéro Palace with its two 70 metre high minarets. It was designed by Gabriel Davioud for the Universal Exposition (World’s Fair) of 1878.

The garden remains, but the original palace was demolished. On the same site, the current building was erected for another Universal Exposition (World's Fair) in 1937.

At that time the gardens also got a facelift.

I giggled to myself and at the same time felt sorry for someone being called Peter the Fish (Pierre Poisson). I am sure that at least as a child his Joy of Life was dampened by having such a name. 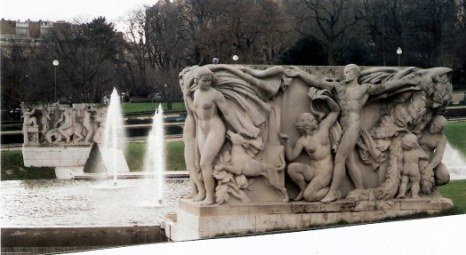 These grand spectacles were designed to impress the world when France was the second largest colonial empire in the world.

They continue to impress, as they complement each other on either side of the Seine.

The view looking towards the Eiffel Tower from Trocadéro Gardens has been carefully framed.

It was from here, when Adolf Hitler was in Paris on his whirlwind tour of the newly conquered city in 1940, that he viewed the Eiffel Tower.

A Paris skateboard paradise at Trocadéro

Today, not everyone who visits comes for the view – for it is a popular Paris skateboard venue.

A battery of water jets

Further down the slope, an energetic Trocadéro fountain pumps jets of water at 5,700 litres (about 1,254 gallons) per second. 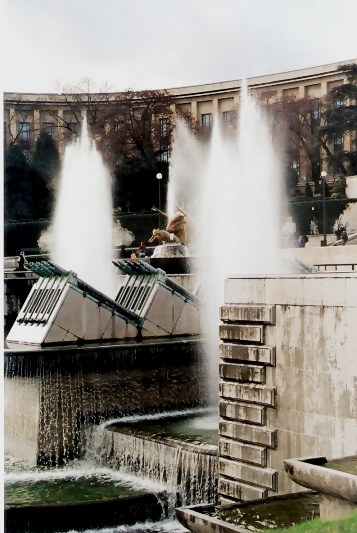 Against all this activity this lady has a more serene location.

She stares eternally at the tower, even when people are writing names on her derrière. 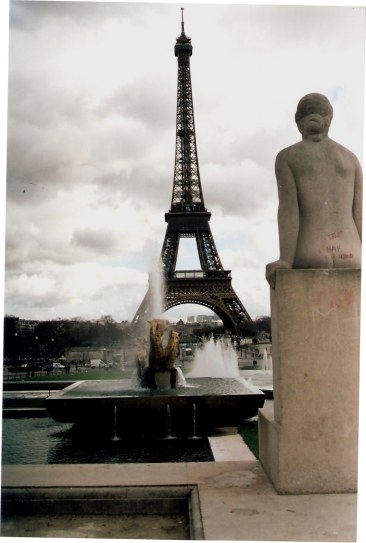 Perhaps she is also taking in the antics of the horse heads below her, as they seem to frolic above what could be a leaking drinking trough. 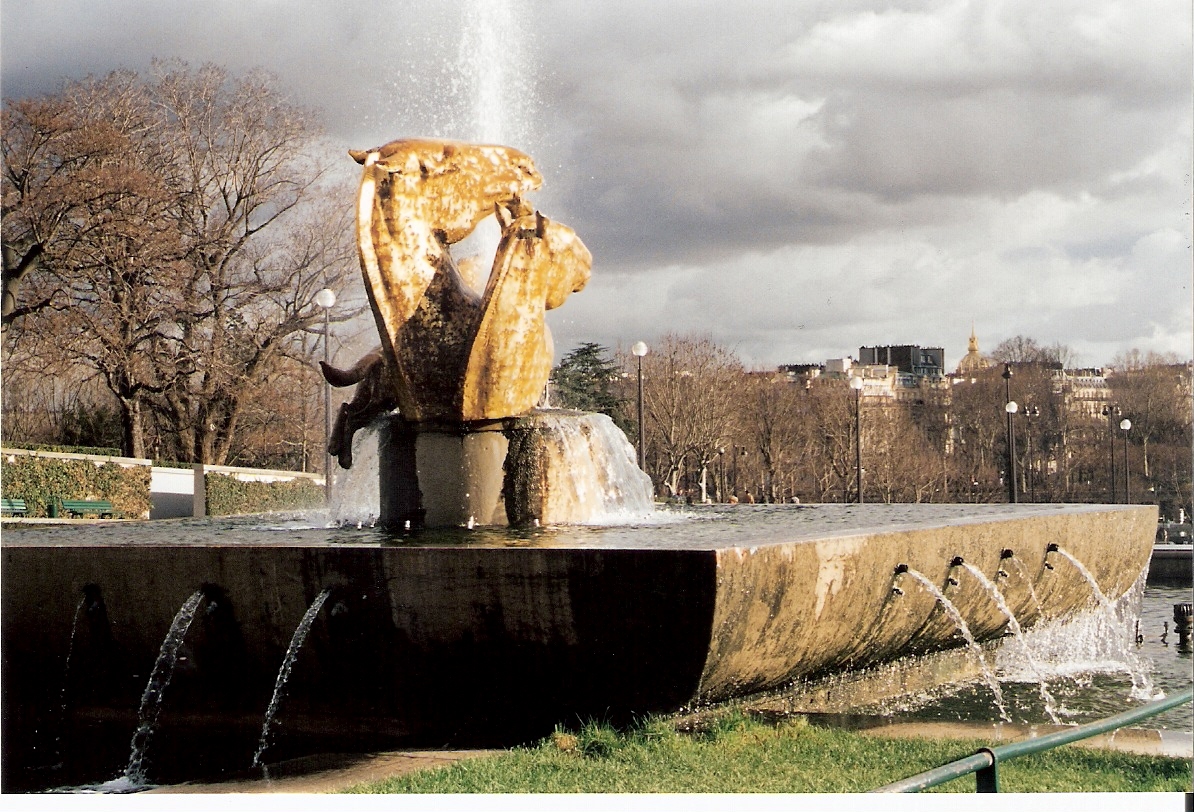 A Trocadéro tribute to the horse, as well as to the rider

A horse can conquer the heart – even in sculpture.

Perhaps it is because they remind us of famous relationships between a person and his or her mount - or even of our own. Or perhaps it is respect for their intelligence.

The police know that a horse has more sense than to act upon a stupid or dangerous command - whether by an alcoholically enhanced person or not.

So take note! If you have been drinking, ride a horse home instead of driving anything with wheels.

I was to discover that the German law follows the same pattern. In fact there, you can lose your drivers licence for being drunk in charge of a bicycle.

At any rate, I always spend a short while in the Jardins de Trocadéro wherethis great animal looks down at me as he stands with his rider against the Paris sky.

Wisely, this man is holding back his horse lest he, too lose his head! 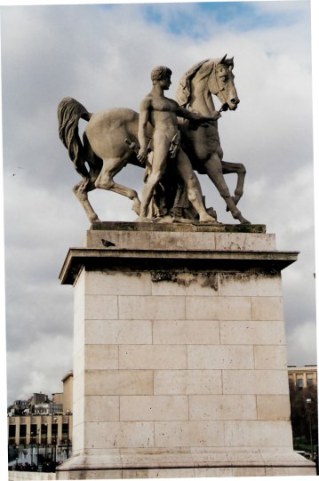 Some unattributed person once made the wise observation that a dog may be man's best friend, but the horse wrote history.

It is fitting that here there is not only a statue to the Roman Soldier, but also of his mount.

In Roman times, Paris was home of the wealthy Parisii - a Celtic tribe who, when breaking their former allegiance to Caesar by supporting another Roman General, caused the overthrow of their settlement and the formation of the Roman city of Lutetia.

This became a crossroad of the Roman Empire: the north-south road (now rue St. Jacques) from Spain and Orléans (Cenabum) crossing the Seine and onwards to the north, and the east-west road from Italy and Lyon through Paris (now rue Galande) and on to Normandy.

I sat and admired this 1853 statue of 'Un Guerrier Romain' - 'A Roman Soldier' - by Louis Daumas, and remembered the Bedouin legend of the beginning of the horse:

…and Allah took a handful of southerly wind,

blew His breath over it,

and created the horse....


Thou shall fly without wings,

and conquer without any sword, oh horse.