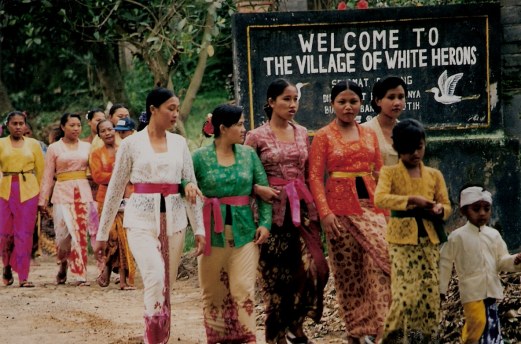 The Village of White Herons in Bali has a strange and compelling story to explain the sudden arrival of the birds following their village cleansing ceremony held some weeks before the birds came.

The ceremony had been to rid the bad forces left from a tragic massacre on the edge of the village.

In 1965, a failed coup in Indonesia was attributed to communist conspirators.

A period of mass murder of known or suspected PKI (The Indonesian Communist Party) followers ensued, including a massacre of over 5% of the population of Bali.

According to reports, many, as those in the little village of artisans called Petulu, not far from Ubud, were apparently made to sit on the edge of the mass graves prepared by force by their fellow villagers.

They were then shot - one by one - in the back of the head.

There are reports that elsewhere many Balinese 'suspects' were simply hacked to death with machetes and tossed into the sea.

As with all such tragedies, 'suspects' were sometimes those in a land dispute or whose land rites were to be removed in favour of those undertaking the killings.

This violence preceded the downfall of President Sukarno and the sweeping to power of Major General Suharto – with an ensuing thirty years during which many experienced imprisonment without trial.

There has been a careful writing of Indonesian history. This means that many young Indonesians are now ignorant of this dark period in the nation's past.

According to Subversion as Foreign Policy: The Secret Eisenhower and Dulles Debacle in Indonesia a CIA report states:

the anti-PKI massacres in Indonesia

rank as one of the worst mass murders of the 20th century".

In later years, the evidence against the coup being instigated by the PKI has proven to be doubtful.

The survivors in Petulu took action to rid the village of this dreadful negative energy by holding a ceremonial cleansing ceremony in the last week of October 1965.

On the 7th November the same year, the herons Kokokan arrived for the first time in recorded history. 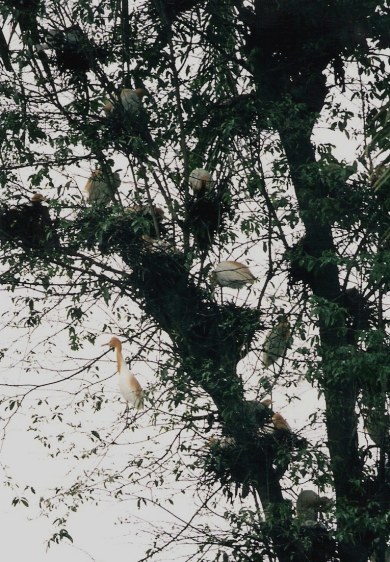 At first, people captured some of the herons for food and as breeding stock – but over 50 people who did so were visited by scary spirits, and quickly released them.

The village then held a ceremony of welcome for the birds, who have ever since continued to return from their foraging all over the island to perch here at night, en masse. 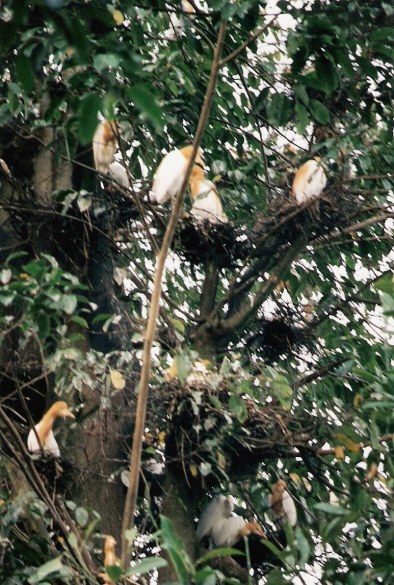 Are the herons the souls of the massacred villagers of Petula?

During the ceremonial procession for the Welcome Ceremony, the priest fell into a trance.

From this, he learned that the herons were there to guard the village from pests and from future negative events.

The villages believe the white herons to be the lost souls of those massacred and buried without due rites - and therefore bound to wander the land forever.

There are three types of herons who suddenly decided to make Petulu their home:

Their numbers have been estimated to total up to 20,000. 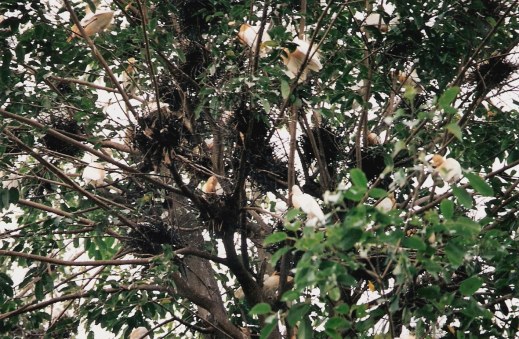 It is strange that they have only ever occupied a stretch of road that is on the route to the temple – and they appear only in front of the houses.

They never go behind the houses, an area which in Hindu tradition is reserved for things unclean, such as toilets.

It is interesting to see the herons strolling the streets side-by-side with the villagers - who still pay homage to the birds as these holy representatives.

Those who live in the Village of White Herons are quick to point out that since their arrival the village has had uninterrupted prosperity.

There is a 'Donations Box' on the outskirts of the village.

I was fortunate to be passing the Village of White Herons when it appeared to be celebrating the ritual of Bhuta Yajna - or of cleansing Evil Spirits. 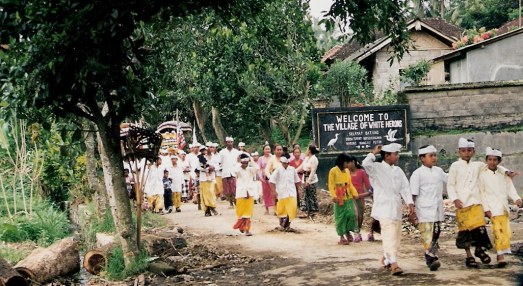 This ritual traditionally removes any negative elements and puts the village back into the correct balance between God, humans and the environment.

The men lead the procession. 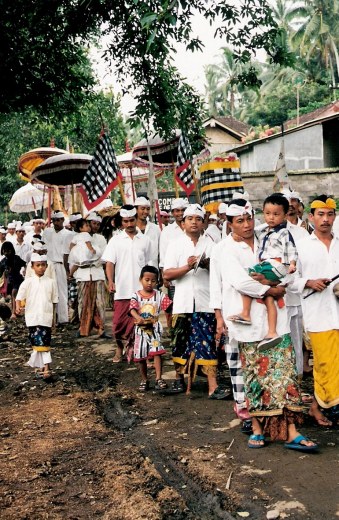 The event also makes offerings to Batara Kala, the god of the underworld.

Along with his goddess Setesuyara, Batara Kala lives in a cave from where he rules over his creations of light and of the earth. 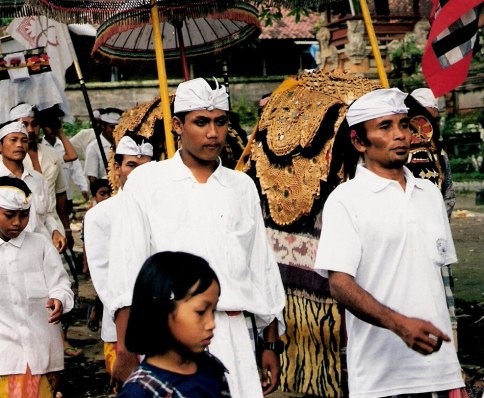 The villagers were parading an elaborate effigy through the village to remove bad spirits and all the negative undercurrents of the village. Perhaps it was one of the important gods from their temple.

Given the Indonesian massacres of recent history, and of people never mentioning - but knowing - whose family was implicated in the killings of the past, there must be some negatives always unstated but ever present.

These must be seeking a way to be laid to rest and such a ceremony may help to do so. 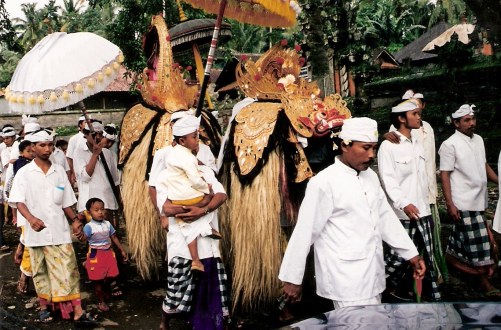 Negative spirits are further scared away by the cymbals. 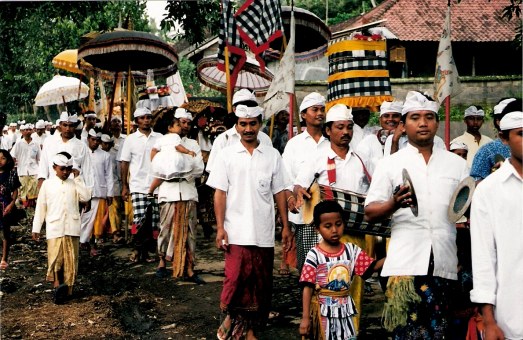 The villagers had serious work to do to cleanse their village – as reflected in their faces as they set off.

In 2004, almost forty years after the killings and after the removal of President Suhato, a 'Truth and Reconciliation Commission' was set up in Indonesia to investigate the massacres and to compensate the families of victims.

In 2006 this was overturned as unconstitutional.

Even had it remained, its job would have been complicated by the fact that, unlike in other lands, there are no records of what took place.

There is just the spoken history of eye-witnesses, many of whom are now dying.

So the methods used by other countries (such as official acknowledgement of such a tragedy and efforts to start the healing process by some form of reparation) not being in place in Indonesia, such a healing village ceremony as I saw that day in the Village of White Herons takes on a new and important meaning. 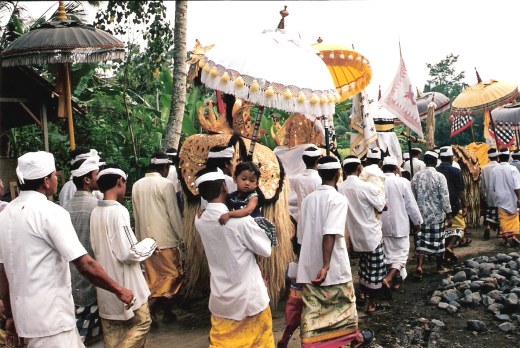 However, any festival has its lighter side, and it was still a day of gathering of friends.

The women followed their men, colourful in their best ceremonial dress. 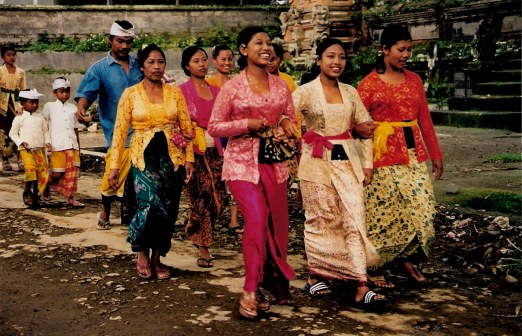 The whole village was elaborately decorated. 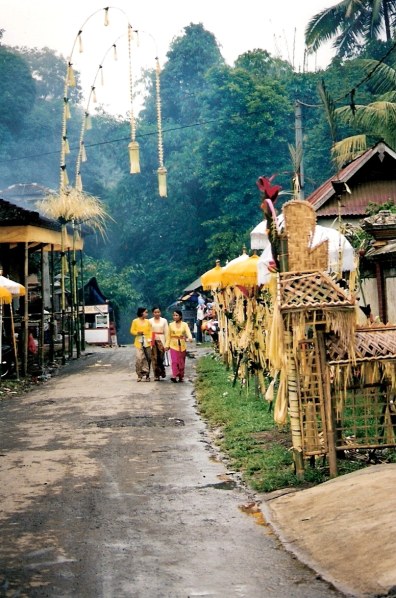 It seemed that, no matter in which direction one walked, there were Balinese umbrellas lining the route. 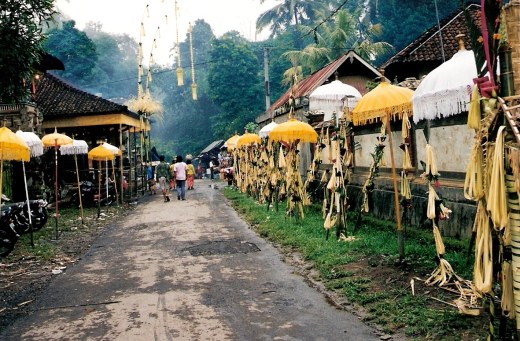 Each decoration represented an offering in itself.

It was an accident of fate that I was at the Village of White Herons that day, but it left a deep impression on me.

The most straight forward way to get to Petulu is to go east on 'Jalan Raya Ubud' ,the main road, and turn left after 2km (1¼ miles)– it is well sign-posted.

Alternatively, this route offers you a stop in the artisan village of Junjungan with its carved Garudas:

Go north out of Ubud on Jalan Suweta towards Junjungan and the turn off to Petulu is on the other side of the village on the right.

The birds arrive home around 5pm. 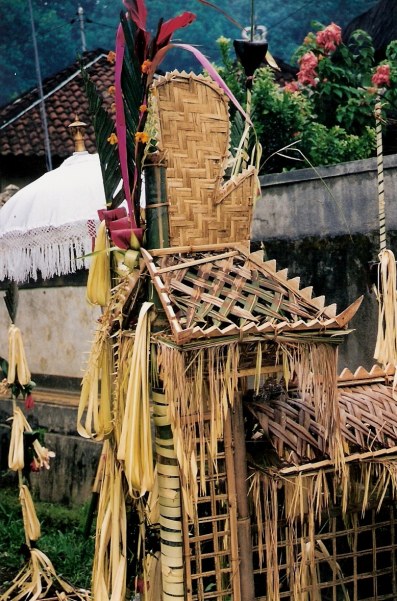 In Hinduism, the Lord Krishan said:

You grieve for those beyond grief,

and you speak works of insight;

but learned men do not grieve for the dead or the living.

Just as the embodied self enters childhood, youth, and old age,

so does it enter another body;

this does not confound a steadfast man.

Our bodies are known to end,

but the embodied self

is enduring, indestructible, and immeasurable.

Death is certain for anyone born,

and birth is certain for the dead;

Since the cycle is inevitable,

you have no cause to grieve. 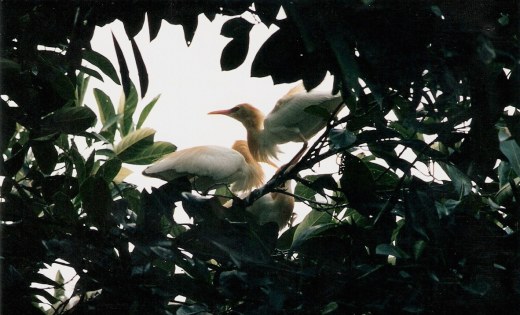 Who can say that the white herons of Petulu are not the reincarnated souls of the blameless dead?