Sometimes in your travels, you come upon a place that is surprisingly lovely – and wonder why you are surprised.

For many people, the beautiful Istrian coast, which the Romans called terra magica, is just such a place - and for me, Rovinj was my gateway.

Rovinj is one of Europe’s hidden treasures: a jewel of a place basking on the Adriatic Sea, with a Mediterranean-type climate and friendly residents.

It is common for locals to speak native Croatian as well as both German and Italian – with many also speaking English and some French.

Legend says that the Rovinj ("Rovigno" in Italian) of today was caused by a massive undersea earthquake in September in the year 304 that divided the land into islands.

Whether so or not, in the 1700s the channel between the mainland and Rovinj was filled in by the Romans, but the city retains an island feel. 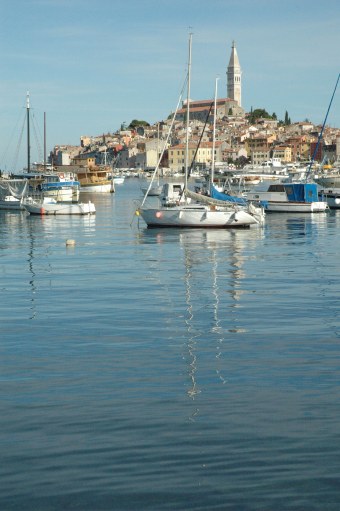 Surprise can come from two quarters: being unaware of the nature of something and discovering it to have an unanticipated definitive character of its own – or from previously held perceptions that are altered upon investigation of the actual thing.

My response to Rovinj was a mix of both, for I had long heard about the Austrian navy – and growing up in Australia in the 20th century, the concept of the land-locked Austrian nation of today having a navy intrigued me – until I studied history and learned of the former extent and greatness of the Austrian empire, which then included the Istrian coast.

Our mother’s great-uncle was Robert Whitehead, who advanced the rudimentary designs for a land-launched torpedo of Giovanni Luppis to develop ship-launched torpedoes with self-regulating fixed depth controls and the ability to maintain direction through gyroscopic controls.

Robert Whitehead worked at the shipyards in Rijeka, or in Italian 'Fiume', the largest port and the third largest Croatian city.

Following a successful presentation to the Austrian government, the torpedo was tested extensively with the aid of the Austrian frigate Gemse, whose commander, Count George Hoyos, subsequently married Robert Whitehead’s daughter, Alice. ( In 1892, their daughter, Marguerite, married the son of the German Chancellor, Herbert Von Bismark.)

Robert Whitehead’s grand-daughter Agathe inherited his fortune and in 1910, in recognition of her grand-father’s role in developing the torpedo which made the subsequent development of submarines a practical reality, Agathe was invited to launch one of the new German U Boats in the early days of the German U-boot-Waffe.

The boat in question was christened U-6 and was to be commanded by Georg Ludwig von Trapp, who had just become an officer after his decorated service during the Boxer Rebellion.

The two subsequently married and had seven children, but in 1922 Agathe died from Scarlet Fever contracted from her daughter of the same name.

As the young Agathe was too ill to attend school a governess was recruited from the local convent. This was Maria, who later married von Trapp and produced four more children. It was she who was the driving force to use the family’s previous hobby of singing (at a level good enough to achieve high recognition at the Salzburg Music Festival of 1930) to bring in much needed funds to support the family after the inherited Whitehead fortune was wiped out.

The money had been moved from an English bank in a show of loyalty and support of an Austrian banking friend during the Austrian banking crisis – but the bank subsequently closed with loss of all funds.

After an illustrious career with the navy at the end of WWI, the Austro-Hungarian empire lost all coastal territories, and therefore its navy, leaving Georg Ludwig von Trapp unemployed.

He was offered a highly paid commission in the German navy but was philosophically anti-Nazi. Unlike in the film version, he was not compelled to take the commission, as Austria was not then under German control.

Having reputedly seen Hitler and some colleagues behaving in what he saw as an uncouth fashion in a Munich restaurant, von Trapp declined the offer and, fearing Nazi domination of the country, the family left Austria.

This departure was not in the romantic 'Hills are Alive with the Sound of Music' fashion – but as a choice in anticipation of the political events which subsequently took place.

Aside from this point, the story that unfolds on the film version of the lives of the von Trapp Family Singers, led by the Maria, is from thereon fairly accurate, apart from the fact that their playful and loving father was the antithesis of the stern disciplinarian father portrayed in the film.

Despite all the layers of family history that linked me by this fragile thread to the Istrian coast – I was unprepared for its incredible beauty. 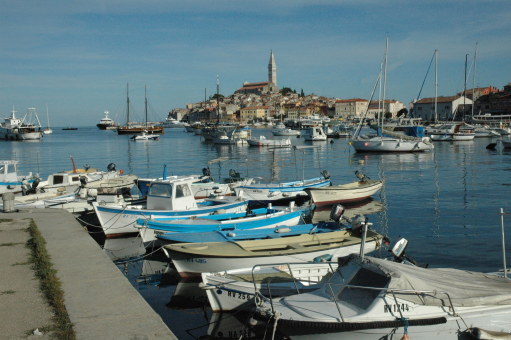 Croatia is now such a peaceful place, but it has not always been so – even in our lifetimes.

As Robert Brault has said:

if everything had happened in chronological order.

- and trying to make a clear timeline for the history of this area echoes this view.

The history of modern Croatia is perplexing to those not of the region for it’s hard to keep track of the allegiances and transfers - including belonging to the Byzantine empire, then Ravenna in Italy, then the Franks (who later evolved into France and the Holy Roman Empire).

Now, some Italian heritage remains from the past, although, despite the census of 1911 listing 97% of the population as Italian-speaking, after WWII (along with thousands of anti-communist Croats and Slovenians) an estimated 350,000 Italians left the region.

In the 1990s the tragic struggles during the demise of Yugoslavia saw the eventual creation of the Croatia of today, which joined the EU in 2013.

For today’s holiday-makers there seems no trace of this struggle for identity.

The Istrian Coast is renowned as a place of charm and relaxation – and Rovinj is often cited as one of the loveliest harbour cities.

From the heart of the city of Rovinj, you can climb down onto the rocks to sunbathe or swim in the turquoise Adriatic sea which is clear, deep and safe.

From the rocks there is a section marked off with a buoyed line that keeps sea-going vessels away from the swimmers. 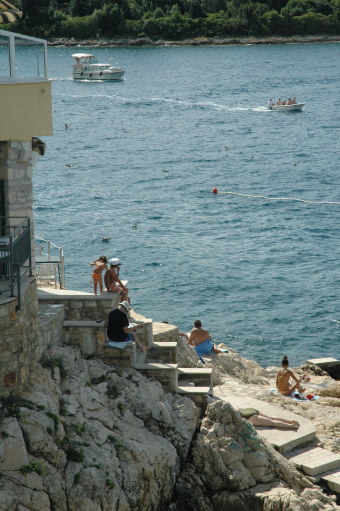 This spot was overlooked from the city wall and was just below one of the central cobbled streets. 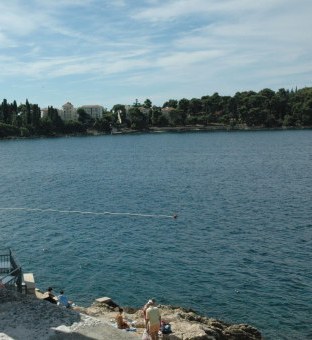 I found this video on Rovinj on the web – it is a true reflection of the charm of what the film calls 'The pearl of the Adriatic':

The city retains its ancient architectural charm, with narrow streets winding around the hilltop, filled with small shops, cafes, bars, galleries and restaurants.

I was always amused that when a car came down the narrow streets, all those seated at the café tables closest to the centre picked up their seats and stood to one side until the car had crept past.

They then resumed their previous seating. The whole convivial atmosphere was only so interrupted a handful of times during a long evening meal.

One morning I watched as this beautiful 'super yacht' briefly docked, loaded stores and departed – all within an hour. 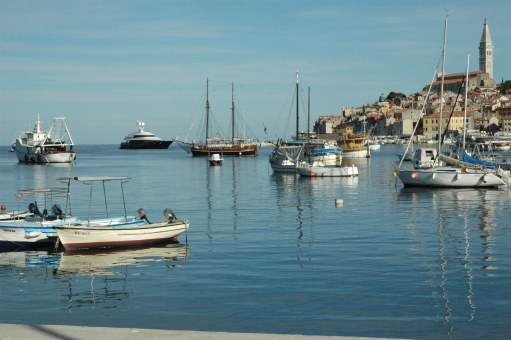 Certainly this is an area where the chance to view it from the water is too good to miss, so we took a boat trip down the lovely Lim Fjord to the 'Pirate Cave'.

Strictly speaking this is not a fjord at all but a 'Ria' – which is what is commonly known as a 'drowned river valley' – or a river valley that was inundated with sea-water due to a rise of the ocean level at the estuary or river mouth.

The pirate who reputedly used the cave was Sir Henry Morgan – Captain Morgan (yes – he of the rum!).

This seems extremely unlikely given the exploits of Captain Morgan in the Caribbean, but it is a beautiful spot.

According to history, the cave was briefly the home of the Saint Romauld who, born a nobleman of Ravenna, had removed himself to become a monk.

Romauld briefly led an order of monks who lived by the rule of St Benedict – that of a communal monastic life led by a spiritual 'father'. This order later became institutionalised as the Benedictine order of monks and nuns.

The Cistercians who left us a legacy of so many great cathedral communities and smaller remote chapels of the United Kingdom (many still in ruins after the dissolution of the Monasteries in the early 16th century) also lived by the rule of St. Benedict - with its three precepts of hospitality, learning and prayer.

Romauld chose the way of life of a hermit in order to attain the stillness from which he sought true enlightenment, but the cave was too accessible so he moved to a larger one some distance away.

This was larger and had been previously uninhabited as it was thought to house evil spirits.

Romauld would probably be insulted by the association, but his principles for new monks at his monastery. reminded me greatly of those in the delightful movie  Eat, Pray, Love [DVD] [2011] (the German version is called “Männer al dente”) – with Julia Roberts and James Franco.

Good rules for a good life: the Benedictine version

There were five principles Romauld gave to new initiates– of which these are but three:

If you have just come to the monastery, and in spite of your good will you cannot accomplish what you want, take every opportunity you can to sing the Psalms in your heart and to understand them with your mind.

And if your mind wanders as you read, do not give up; hurry back and apply your mind to the words once more.

Empty yourself completely and sit waiting, content with the grace of God, like the chick who tastes nothing and eats nothing but what his mother brings him.

Food on the go in Rovinj, Croatia

At any rate, we discovered that the tiny Lim Channel is lovely whether approached by car or by water as is done in this video:

The video is not for those wanting a quick overview – but then the boat trip itself is leisurely.

There was time enough to do some 'Seagull Whispering'… 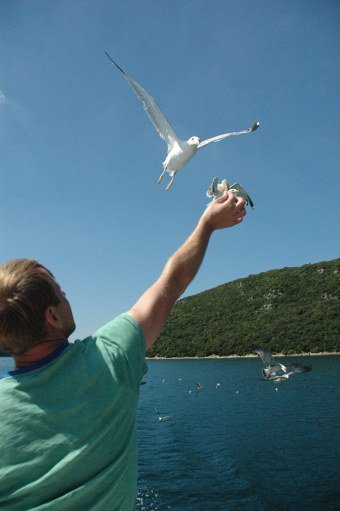 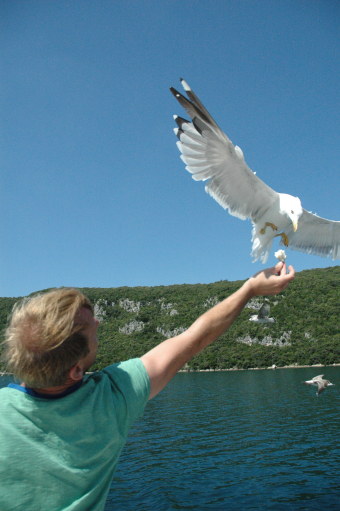 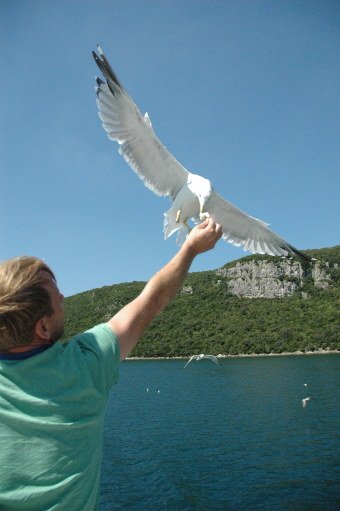 The flock followed the boat in hope of a left-over fish from the grill on the stern, where our lunch was cooking. 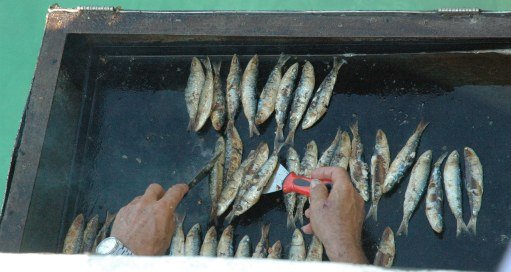 We passed other leisurely water craft – this one with a creative solution to at the same time harness the wind, and protect oneself from the sun. 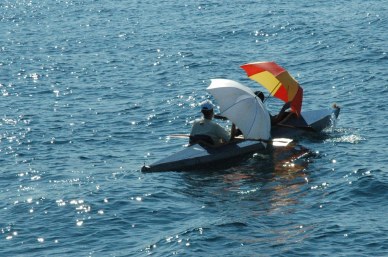 The certain way to be wrong

is to think you control it.

We arrived in Rovinj as just four people with no plan but to get there - and it is a good way to allow the city to work upon your day-weary soul.

The experience of this beautiful area unfolded day by day and ended happily singing and chatting and watching the world pass by in one of the many restaurants and bars on the harbour.

Rovinj is a place where one should (as we did) take literally the words of Samuel Johnson:

Whoever thinks of going to bed 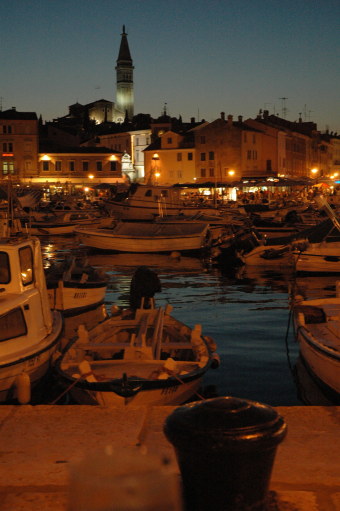 If you need a place for your soul to be renewed – go to Rovinj in Croatia – and relax.