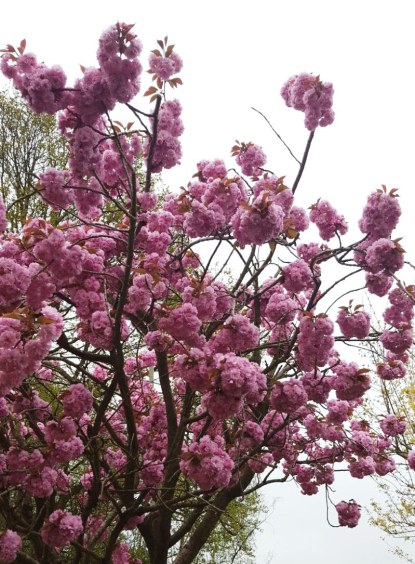 What a strange thing!
to be alive
beneath cherry blossoms

Kobayashi Issa writes in Haiku. This is a poetic order that expresses thoughts around a pivital contrast in three phrases.

For me, the three phrases for experiencing Tokyo are:

In Tokyo I enjoyed them all - and yes - cherry blossom as well. 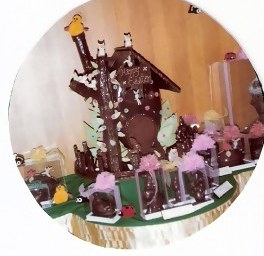 Easter at the Tokyo Hilton

It is a Christian religious event – and to many the holiest of all.

However, Easter eggs and chocolate rabbits are with us world-wide – more a celebration of Spring (in the Northern Hemisphere) than reflecting the holy Christian story.

When we returned each day to the Tokyo Hilton, the whole foyer smelled like a chocolate shop. This fantastic aroma eminated from a  marvellous Easter Egg House - about as high as my waist - and tempting me to make my waist expand.

Carefully moulded chocolate rabbits surrounded it, and I used to stand close and just inhale and despatch others to get my key.

You never know what you're gonna get.

This is sort of like choosing from a Japanese menu.

My friend whom I met in Tokyo had spent the previous two years learning Japanese. She had immersed herself in the culture and experiences of living in this fascination city, exploring its interesting places and learning by trial and error. I ate with her in tiny restaurants where the food was excellent and asked her how she knew what to order.

She replied that at first, she had just pointed to something on the menu as she figured everything would be good. In this way - through trial and error, she gradually came to know what she liked best.

This is truly the attitude to take - but some of the menu items had been translated and these few were a bit daunting:

Not being tempted by the translated items, in keeping with her example, I duly pointed at something not translated.

Whatever it was - it was delicious.

Outside, I lingered on the footpath, hoping the large dog handing out balloons would recognise the child within me – but to no avail. 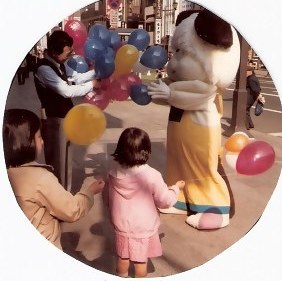 Deciding where to dine in Tokyo is like selecting just one tiny saucer full of food from a gourmet smorgasbord.

My everyday favourites were the Yaki-tori (roughly translated as ‘burnt bird’) houses, where the barbeque style chicken was mouth wateringly delicious.

But one evening I was lucky enough to be taken out by the company and we ate at a 10 seat restaurant serving real Kobe Beef – or to purists 'Tajima Beef'.

To be truly Kobe Beef, this most expensive beef in the world must qualify with the same sort of strictness of rules that define labelling of wine – like anything labelled 'Champagne' coming only from the Champagne region.

For Kobe Beef, this means coming from Tajima bullocks or castrated bulls that have been born, raised and slaughtered (in specific slaughterhouses) in Hyôgo Prefecture, and have a specified fat marbling level and meat quality score.

The lucky animals who live on one of the 262 small Tajima Beef farms have a pampered lifestyle - including daily massages (oh how we wish).

However, all good things must come to an end, but before it does, the final stages of their controlled diet to fatten them well offers them the addition of a mixture of sake and beer mixed into their grain.

The phrase A short life, but a merry one comes to mind.

This is meat best eaten on a company expense account, for in Japan business entertainment is tax deductable.

My Tokyo host merely passed his business card to the restaurateur.

The art of the kimona in Tokyo

Returning to the hotel, a colleague hurried across the foyer to draw me towards the rear staircase.

“Come quickly. You have to see this. There’s a parachutist convention downstairs.”

Puzzled, I followed - and paused at the top of the stair.

Below us, about 80 girls were clattering about on their wooden geta shoes - all in traditional kimonos – with the knot of the Obi, or sash, clearly resembling a packed parachute on their back. 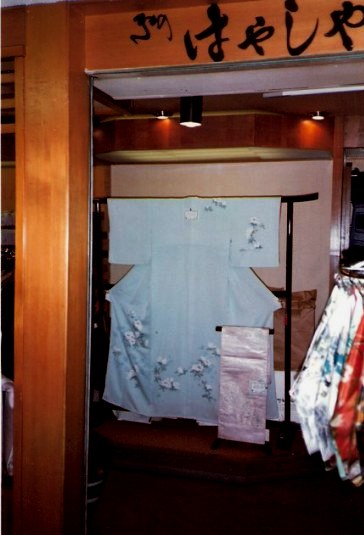 I laughed, but was really glad to have seen so many gorgeous kimonos.

There are about 15 different ways to tie a woman's obi - depending upon the occasion.

You can see why the the parachute analogy from this diagram of the common drum bow style of obi. 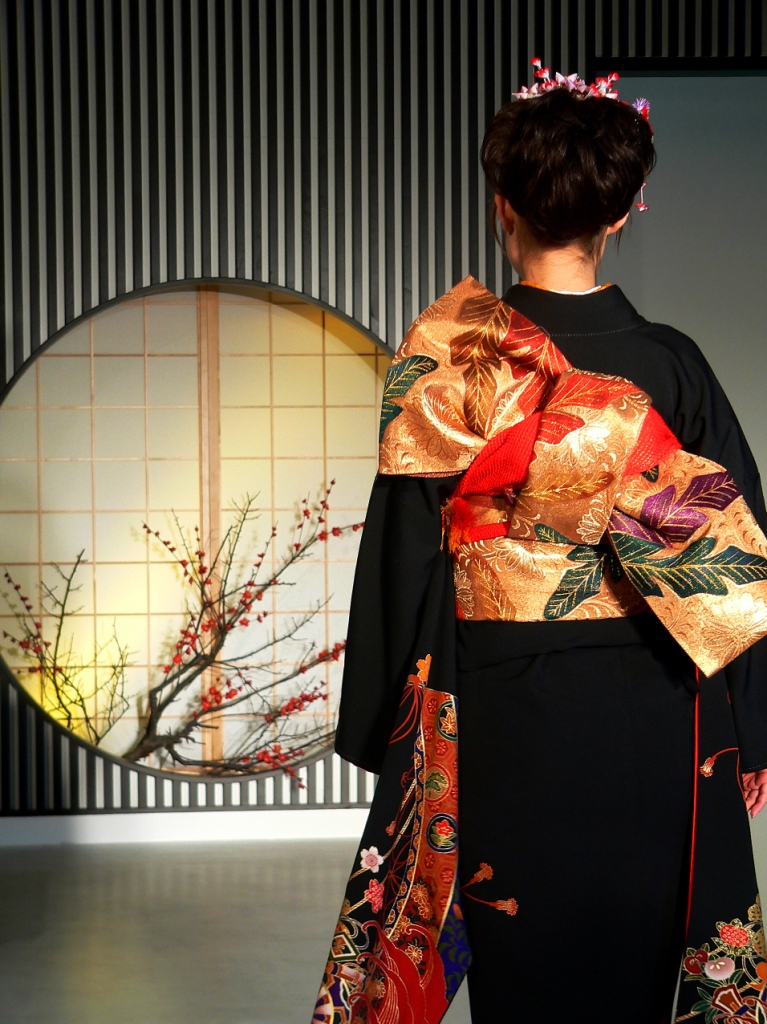 When you consider that a lady’s kimono can be expected to cost more than €7,000 (about $10,000 US Dollars), and altogether, with accessories and wooden shoes (geta)and socks (tabi) the costs for the whole outfit can be more than double that figure, it sets the perspective of what 'gorgeous' means!

In a Tokyo shop window later on, I was able to study the beauty of a kimono design.

As is usually the case, the Obi is displayed beside it. The obi alone will usually cost about equivalent of USD$2,000 to USD$3,000 by itself .

The Obi is more elaborate. Each one is carefully crafted to be a stunning complement to the gown.

It is an interesting aside to learn (especially for me, who has not earned the title 'The Charity Shop Queen' for nothing) that second-hand kimonos can be actually quite inexpensive – although the Obi holds close to its original price. So, if you are on the hunt for a genuine kimono and not prepared to pay the equivalent of a down payment on a car – seek out a local and ask about second-hand options.

Since the kimono is today worn more for special occasions than for everyday, and since it consists of about 12 separate pieces that need to be worn in a traditionally ordained manner, getting dressed is no ordinary matter.

Tokyo Kabuki is not a short affair: pack a meal

Speaking of kimonos, leads us to the fact that this is the costume of Kabuki Theatre -and for a uniquely Japanese experience I suggest attending a Kabuki performance.

This ancient form of theatre began in 1603, and as I was to see, in Tokyo it is a draw card for people of all ages.

People arrive with their picnic bags and lunch boxes - for the performance is no quick affair. 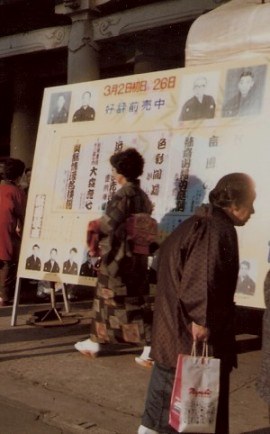 The highly stylised costumes and make-up of Kabuki have long been celebrated in Japanese Woodblock prints, and it is from these that I made its first acquaintance.

The name ‘Kabuki’ is a combination of (from left to right):

In the Edo Period, the content of Kabuki plays was quite crude – with street humour ranging over topics not usually spoken of in ‘polite company’.

At that time, both male and female parts were played by women, and Kabuki became briefly known by words that roughly translated mean 'singing and dancing prostitute' - performers being available for that purpose after the performance. Not now though. 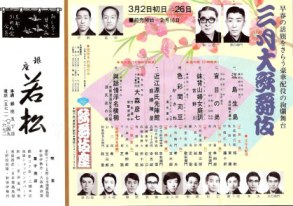 The play itself is a sort of equivalent to a modern day soap opera, but in Kabuki the costumes and makeup accentuate features of the characters and actors often interact directly with the audience.

It’s a noisy affair, with wooden clappers announcing the beginning and end. In between, accompaniment comes from chants, drums, flutes and shamisen (literally translated as 3 flavoured strings).

The history of Kabuki in Japan is fascinating to read.

Like all good soaps, the demarcation between real life and the plays that caricature real life, is variable - and thin at best.

During the post World War II Occupation of Japan by the Americans, Faubion Bowers, a linguist and aide to General MacArthur (and probably the first to step foot on Japanese soil after the surrender) was instrumental in removing the censorship that the Allies first placed on Kabuki.

However, after the Second World War, all 'past' thinking was rejected and Kabuki represented the past. Interest waned.

The Man Who Saved Kabuki: Faubion Bowers and Theatre Censorship in Occupied Japan

For insight into how the arts in Japan meld with attitudes, ancient and modern, try Alex Kerr’s book titled 'Lost Japan'. 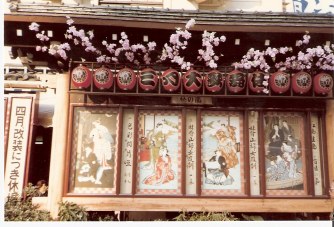 Now revived, Kabuki is the most popular traditional Japanese drama, with actors often also appearing in TV plays or in movies. 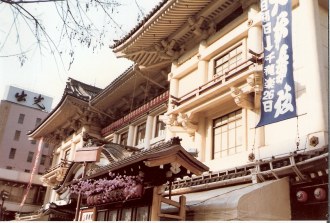 When I was in Tokyo it was early spring time and the cherry blossoms were merely in bud, but here outside the Kabuki theatre, artificial cherry blossom waved over red paper lanterns, below which hung posters advertising the plays.

The outside grandeur was worthy of the performances within.

I was not disappointed by the play, but didn’t last the whole performance.

If you have to be in a soap opera

try not to get the worst part

In Kabuki there are no bad parts.