It could be said that the whole of central Trinidad is a museum, but Palacio Cantero sets the tone

Often said to be a living museum itself, Trinidad has several museums to explore.

One well worth the visit is the former home of the colourful figure - Justo Germán Cantero.

It is now known as the Palacio Cantero and is the Trinidad General Municipal Museum. 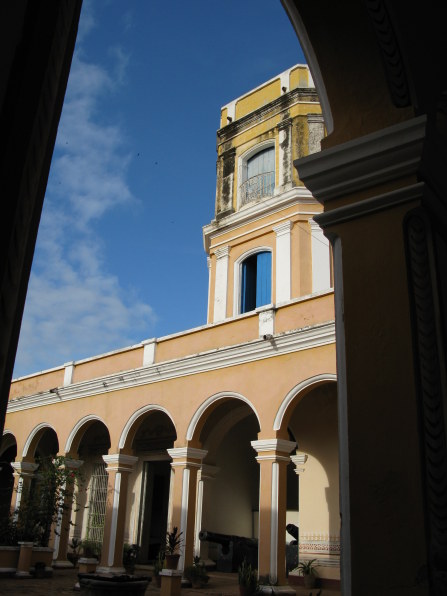 Justo Germán Cantero: The new arrival and his new friends

A doctor, Justo Germán Cantero arrived in Trinidad under a cloud of local speculation about the exact nature of his past– commonly thought to hold something of spice and intrigue.

However, Cantero had a winning personality and was soon in the powerful inner circle of the three most wealthy and influential sugar mill owners of the famous and productive engine of commerce, the Valley of the Sugar Mills.

These three were – Don Pedro Iznaga, Don Jose Mariano Borrell - count of Guáimaro, and Jean Guillaume Bequer – a Philadelphia native who changed his name from John William Baker when he took Spanish citizenship 1819 – a profitable move given the opportunities of the slave trade for Spanish citizens at the time.

Of the three, Bequer appears to have contributed most to the civic organisation and infrastructure of Trinidad.

Amongst his other recorded support, Bequer is said to be the person behind contruction of the long-lasting cobbled streets of Trinidad, his peers having rather more interest in themselves and their family legacy. 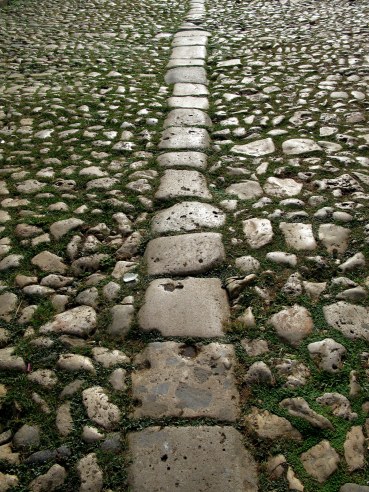 Tall tales and true of Cantero's friends.
Iznaga and Borrell - A rich history

Borrell is said to have left over a million pesos in his will and according to its terms, over 600 boxes of sugar were sent to Spain along with a purchase order for the 'adornment' of his two duaghters with jewels and other lavish items.

Don Pedro Iznaga was what might be described as an eccentric. He is said to have a penchant for dining nude on the rooftop patio to the dancing and singing of slaves. It appears that he was rather grossly over-weight – and of a variable disposition – and his wife, younger than he, subsequently fell in love with Cantero.

Local stories of the time suggested that the two poisoned Don Pedro so they could be together after his death, Cantero thereby inheriting one of the great fortunes of the time. It makes a fine legend.

However, by way of balance, according to one of his many illustrious guests, the Spanish Galician Ramón de la Sagra who was then a Professor of History, Cantero "was one of those kindly, enlightened and educated men who deserve to be rich because of the use they can make of wealth".

Ramón de la Sagra himself fell into that same category. He travelled extensively throughout the Americas and eventually settled in Paris. Here he wrote and published copiously-about:

He started the first ever recorded newspaper of its type, the Anarchist Journal in 1845 (quickly shut down by the Duke of Galicia).

In Paris, he worked as the Consul General for Uruguay and at that time met Karl Marx and Friedrich Engels.

It is unclear whose thinking influenced whose – but one could assume it was a lively intellectual swap meet.

Ramón de la Sagra returned again to Cuba only briefly and then returned to Switzerland where he died aged 73. It had been a rich and influential life.

The more I read about the guests who frequented Palacio Cantero I can’t help but wish that I could have been present amongst such amazing thinkers and creative people as those who attended the grand and lavish dinners and festivities hosted there.Even those of distasteful attitudes - in the era it would not have been a boring dinner.

When the rumours surfaced about his supposed role in the demise of Borrell, by then the engaging personality of Cantero had seen him appointed to the royal bedchamber of Spain.

On the way he had acquired many grand titles and honours, some framed here for posterity. 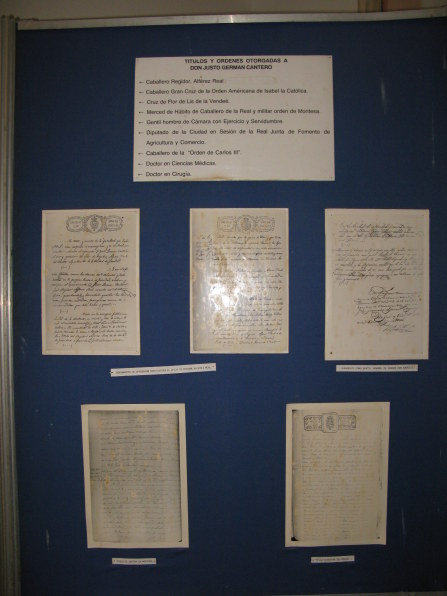 Cantero: benefactor to the arts and author.

Understandably, no one was prepared to make such accusations publicly - and the two enjoyed the fortune together.

Cantero was a great protector of the arts – being himself a pianist, composer, poet and author of the books 'The Sugar Mills of Cuba' and 'The Book of Inventions'.

When you enter, you pass a carriage, resting under the arches …… 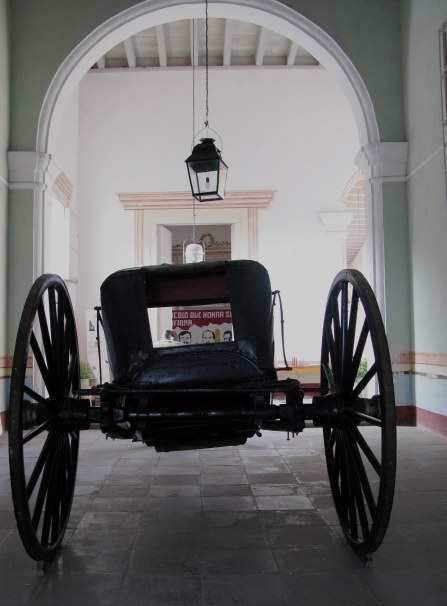 …en route to the inner courtyard where the piano rests. 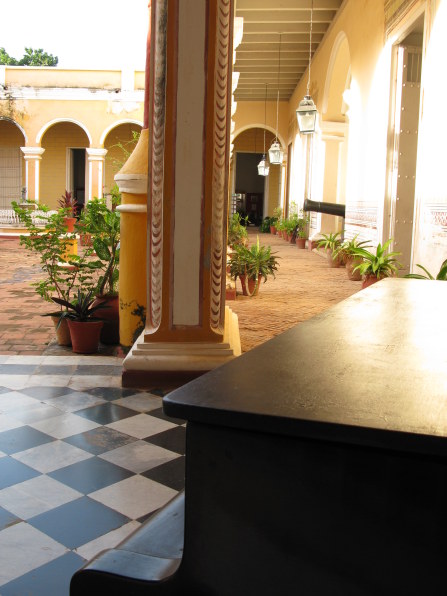 It is not difficult to imagine this as a working household with colourful flowers in the pots in the courtyard... 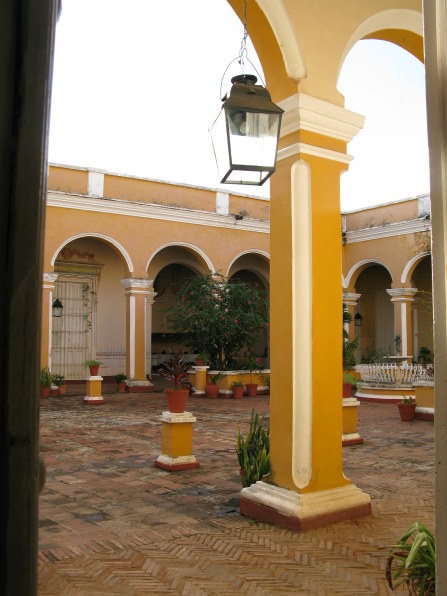 … water playing in this whimsical fountain… 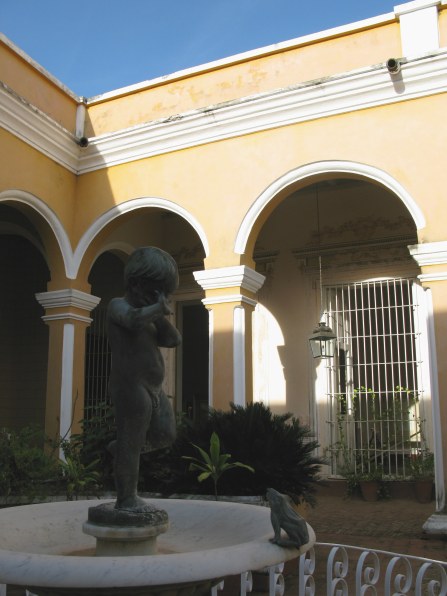 …and it all being viewed from the cool of the adjacent rooms with their massive windows. 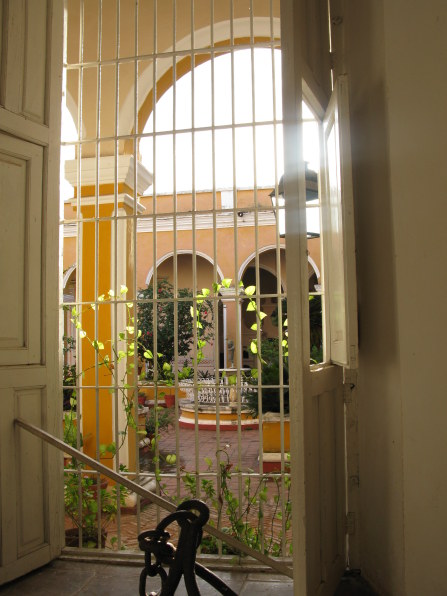 The airy living room opens directly onto the central courtyard… 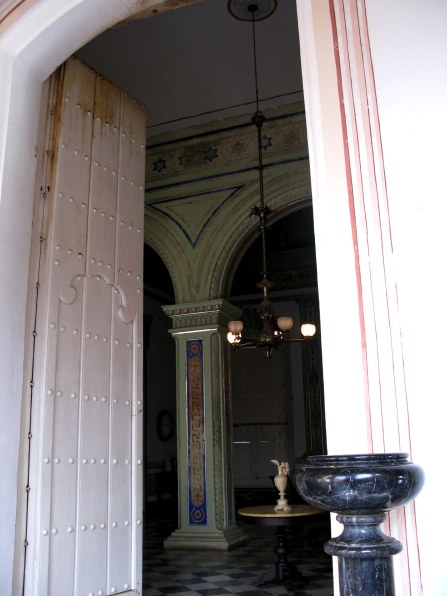 As you step inside the effect is breath-taking. 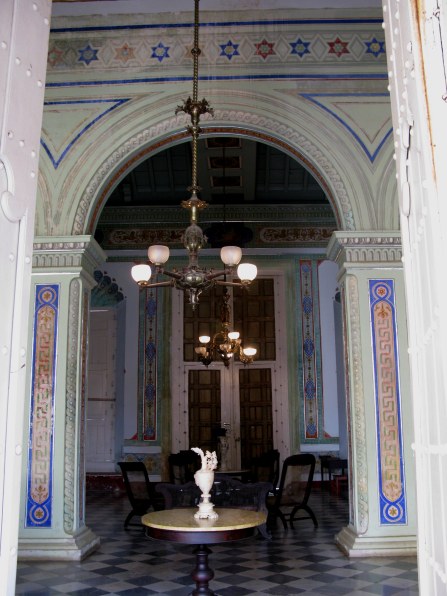 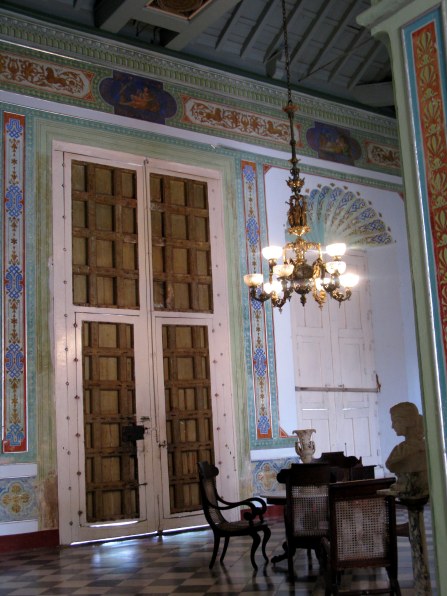 … is perfectly retained in its original grandeur. 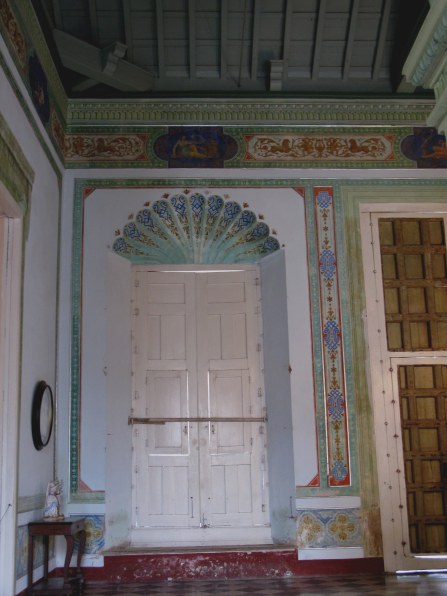 As you roam the spacious rooms… 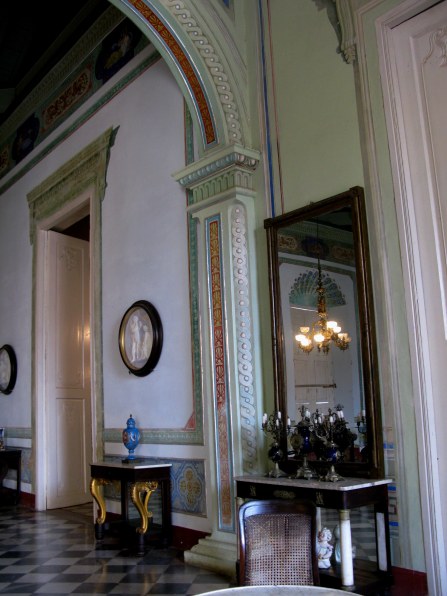 …there are beautiful artworks - some of which were antiques even when the house was inhabited. 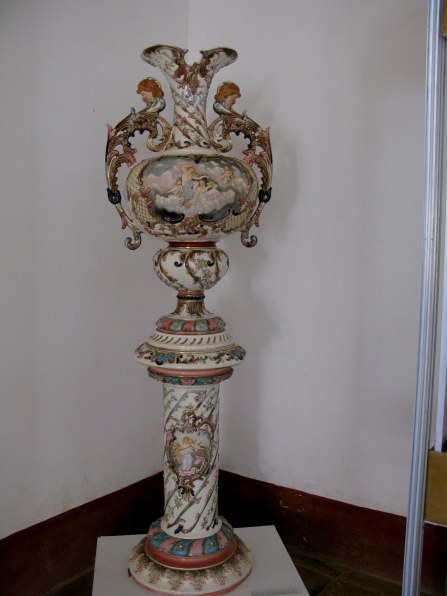 There are lovely old clocks and candelabra… 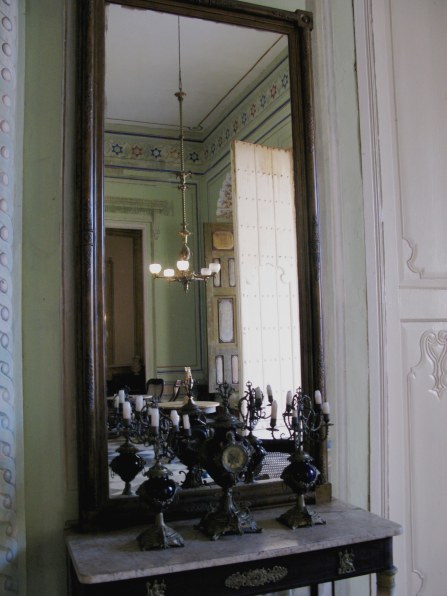 ...on a marble-topped side-table beside beautifully decorated arches… 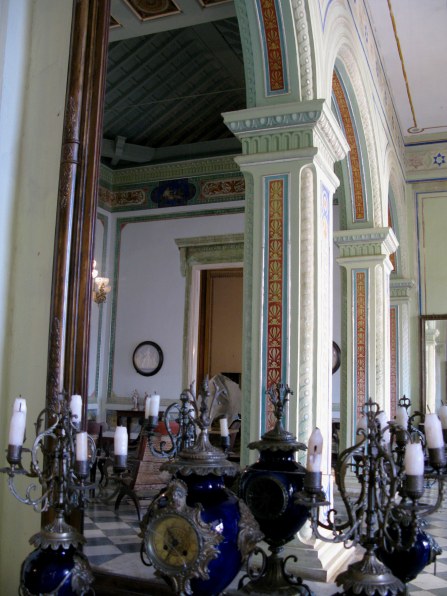 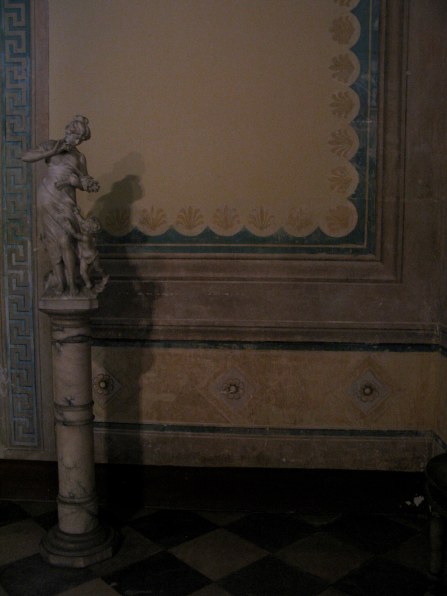 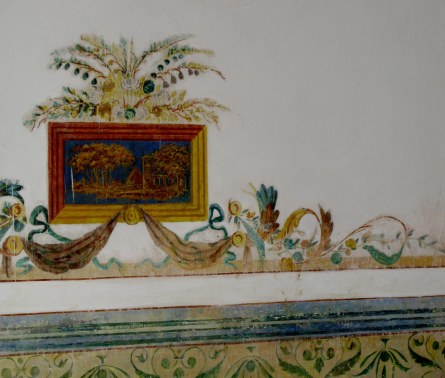 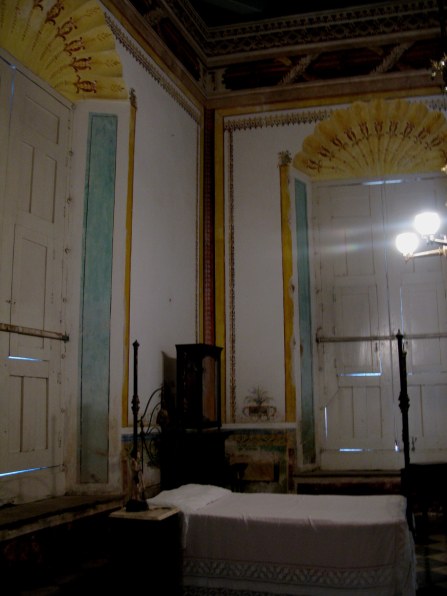 …opens onto the central living room … 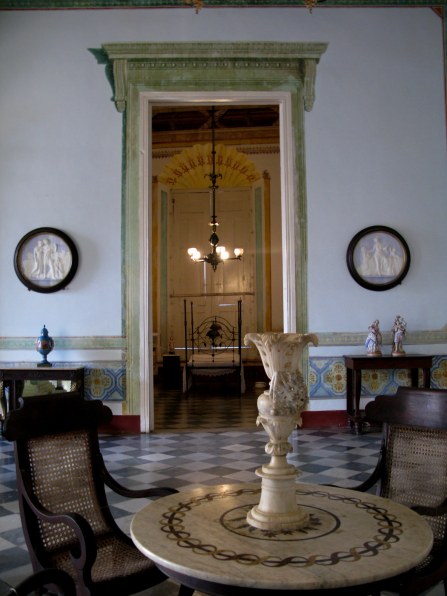 …with its reception rooms.. 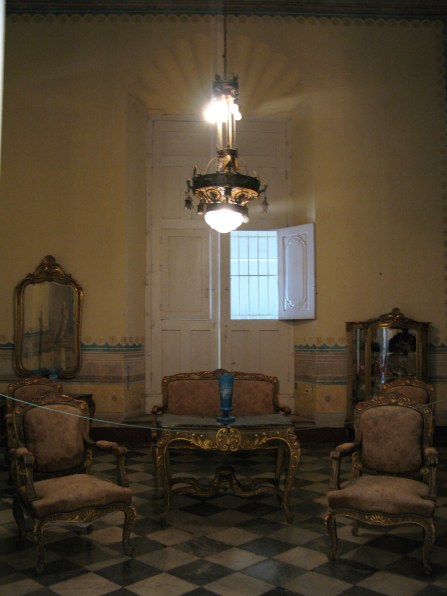 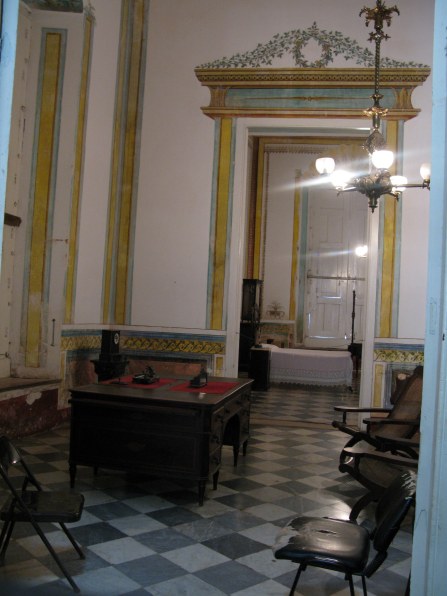 From the study there is a huge doorway leading onto the central courtyard. 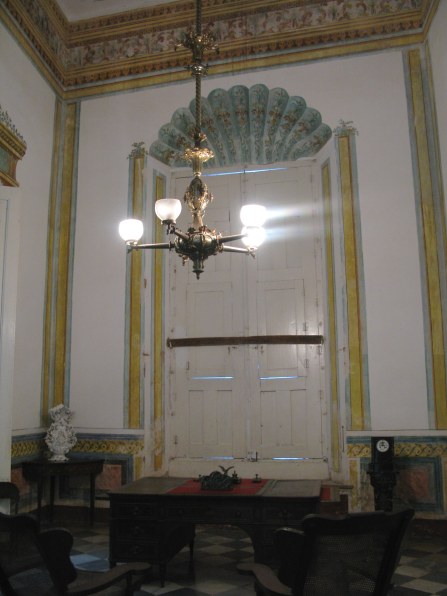 Beautiful details delight and coolness enfolds you at Palacio Cantero

Poetry is just the evidence of life.

If your life is burning well,

poetry is just the ash.

As I stood looking at the beauty in which Justo Germán Cantero had lived and worked, I felt that his fire had been well stoked by his environment.

Everywhere there was loveliness: at the wash stand… 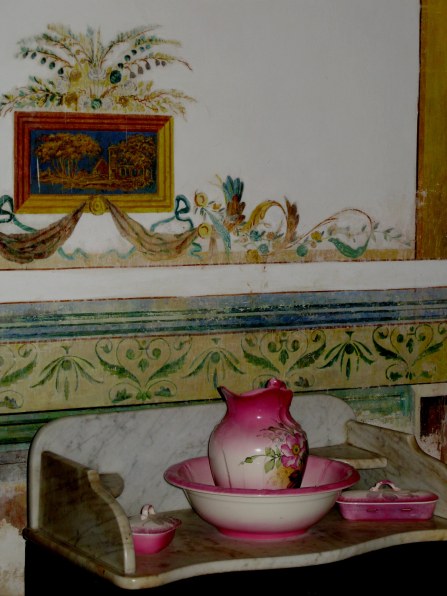 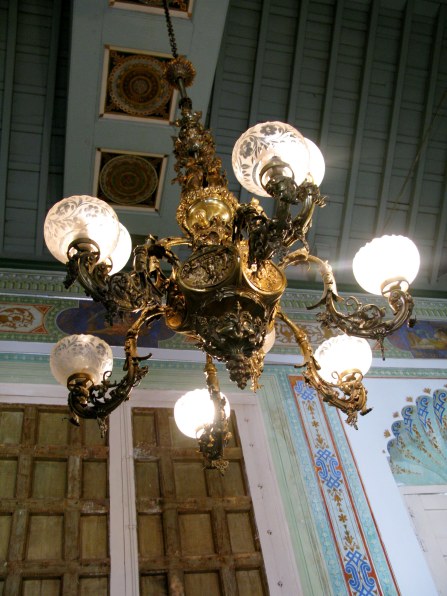 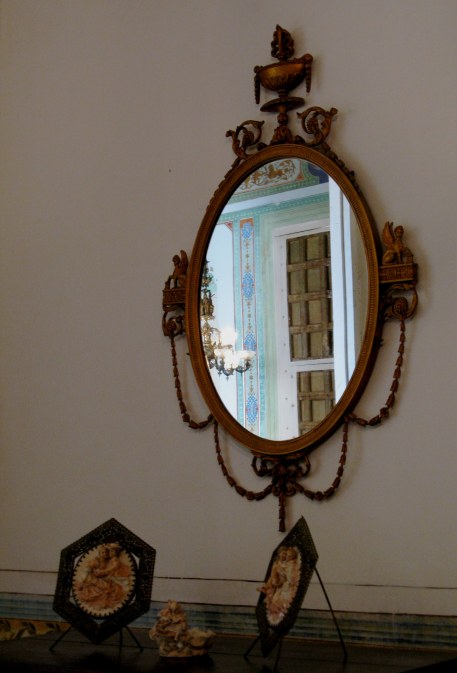 ..and large, all reflecting the surrounding grandeur. 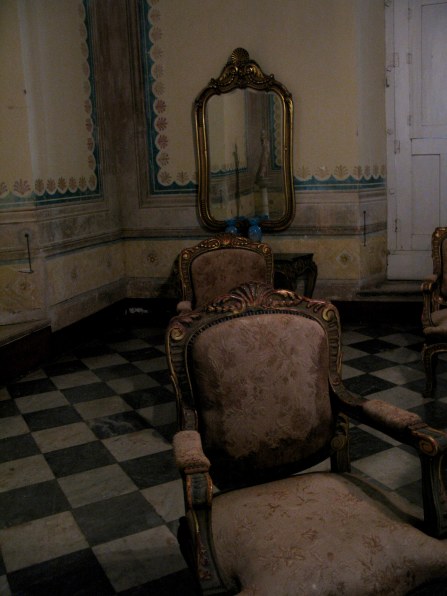 Interior doorways are massive, giving a welcome airiness to the whole house. 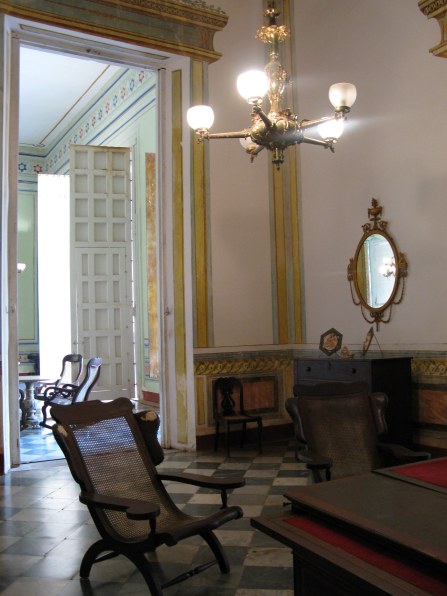 The kitchens are on a grand scale to accommodate the lavish fiestas that took place here. 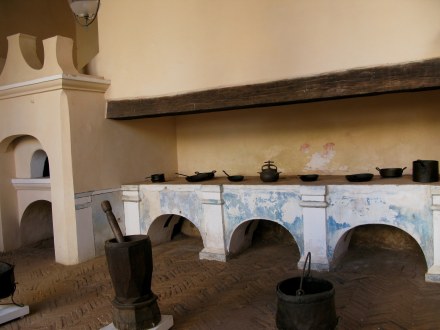 Even the sewing machine is a thing of beauty. 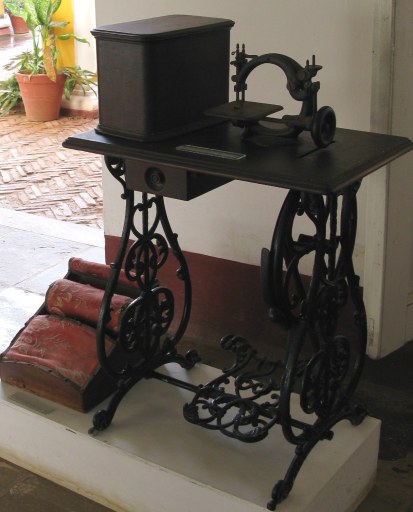 Tales of excess leading to loss, but with a stylish exit

Apart from the beauty we now see, Cantero reputedly installed a marble bathtub with cherubs from whose mouths came gin for the men and cologne for the women (in other words both for the benefit of the men!).

But Justo Germán Cantero lost it all.

It really did turn to ash.

It was with the fortune of Don Pedro Iznaga that Cantero renovated the house now known as Palacio Cantero, originally the home of Maria Fernandez de Lara Monserrate and Borrell .

Given to the level of Cantero’s extravagances – even the fortune he inherited and managed could not last. But as a final shrug against his impending penury (about which I cannot find a record), he threw one last magnificent feast with dancing and extravagant food.

Apart from the legacy of the architectural magnificence that sugar enabled Justo Germán Cantero to bestow on Trinidad, he left a rich and enduring literary heritage.

His books 'The Book of the Sugar Mills' and 'The Book of Inventions' are treasures now kept in vaults for the lucky researchers who can appreciate them - and the lithographic plates of the books written by Cantero and illustrated by the talented Laplante number but a handful - and are worth a fortune.

In the words of Jennie Churchill:

We owe something to extravagance,

for thrift and adventure