It is the preview of life's coming attractions.

How anyone could have imagined Madinat Jumeirah when they were faced at the outset with just barren desert is hard to comprehend.

It is one of the few artificially created experiences that works. 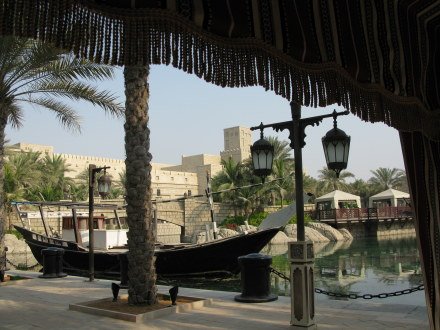 Arriving at Madinat Jumeirah you are greeted by a colourful camel announcing the international position of the emirate of Dubai in the world. 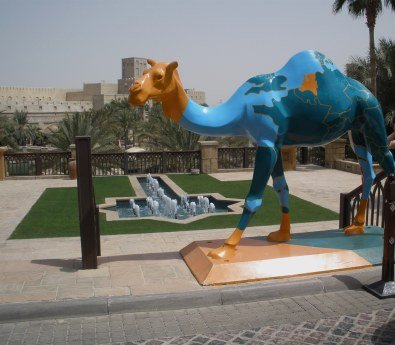 More than a shopping experience in the reconstructed old souk, an opportunity to stay in luxury, or dine or meet friends in exotic bars, Madinat Jumeirah is a clever construction of what old Dubai could be – had it not been something quite different.

Madinet Jumeirah even has its own turtle sanctuary – and a visit here is like entering into a magic land of idealized Arabian delights.

Madinet Jumeirah: A small paradise of waterways in Dubai

The resort has been designed to take advantage of its waterside location. 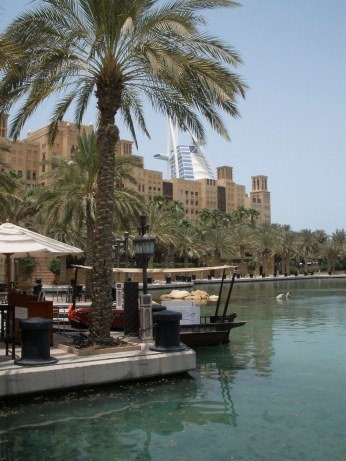 There are more than 5km (2.3miles) of artificially created waterways where traditional Emirati wooden ships are moored. 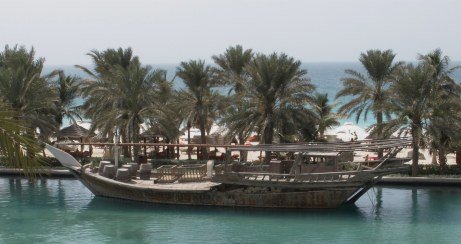 The Madinat Jumeirah wooden ships are more decorative than functional, unlike those of nearby Dubai Creek, which range from small Abras or water taxis, to sturdy sea-going freighters. 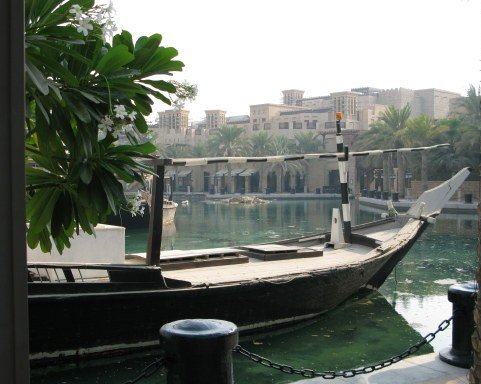 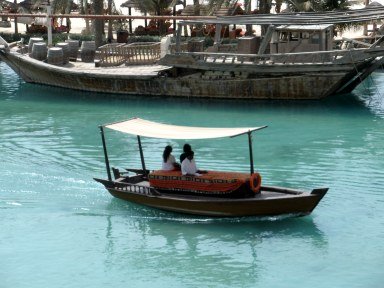 There are luxurious hotels with marble floors gleaming coolly, while outside the temperatures sizzle. 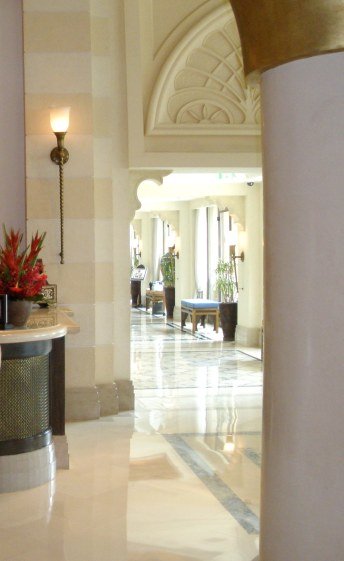 There are stunning views towards Burj Al Arab.

The contrast of the reproduction of traditional architecture of Madinat Jumeirah and the landmark Burj Al Arab shape that is based upon a wind-filled dhow sail seems to accentuate the apparent simplicity of each. 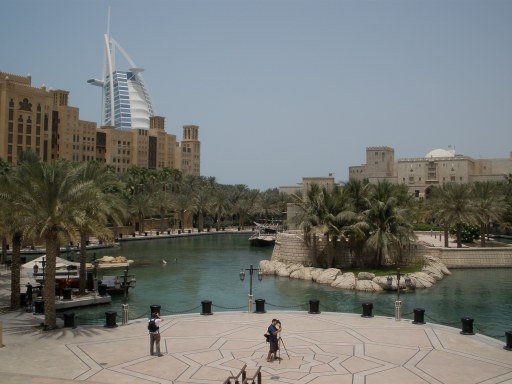 Where Madinat Jumeirah is a reproduction of traditional architecture... 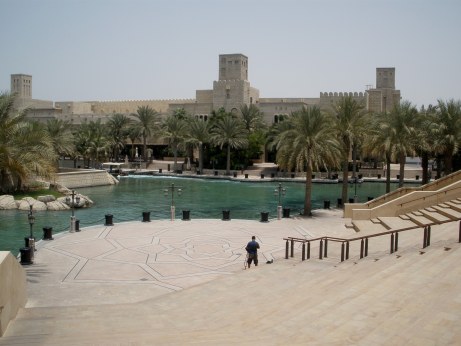 Burj Al Arab is ultra modern - a symbol of Dubai to the world. 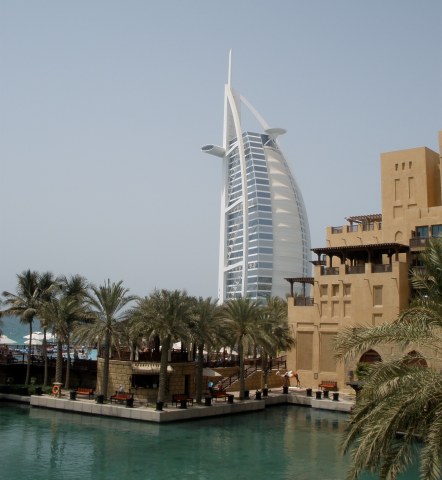 Recreated traditional wind towers jut high above Madinat Jumeirah, with the Burj Al Arab seeming almost to hover behind them. 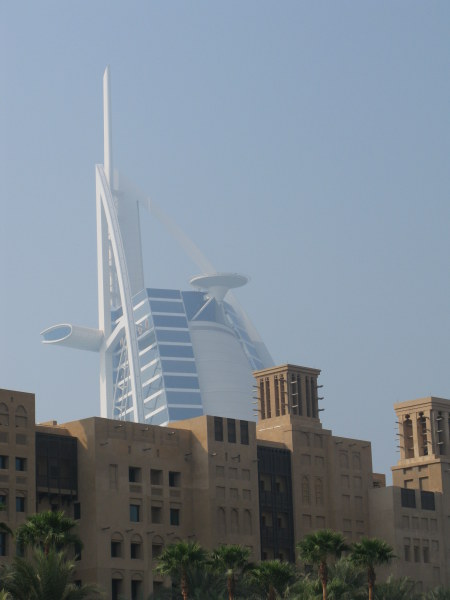 The art of arches
in Madinet Jumeirah

There is traditionally designed fretwork over windows in Madinet Jumeirah, making shades to protect against the extreme heat and glare. 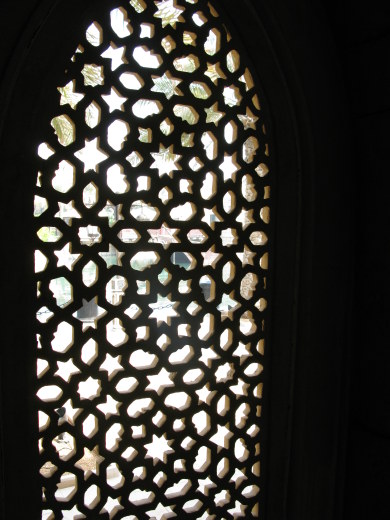 Wooden pergola verandahs give a colonnade effect that draws you into welcome shade from the heat.

The arched lofty pathways of the Souk entice you in.

When I was there it was Ramadan and a Friday during prayer time. With Friday being the Holy Day – equivalent to a Christian Sunday – this meant double quietness. 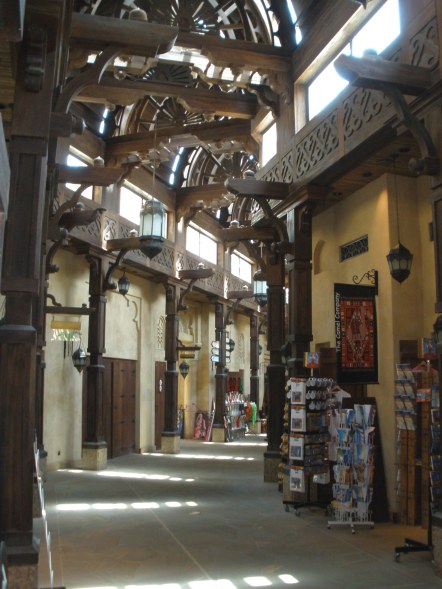 Madinat Jumeirah is exotic at every turn, from its lofty glass domes… 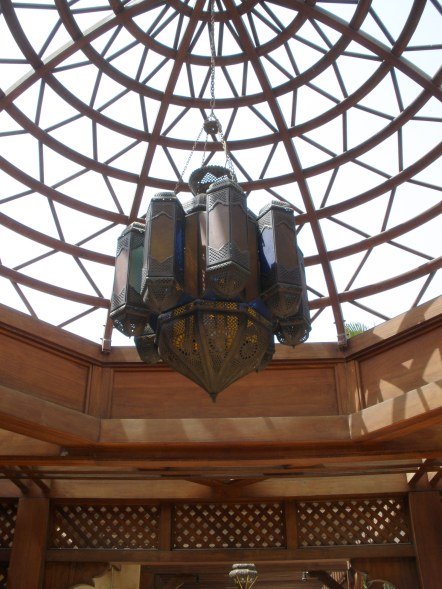 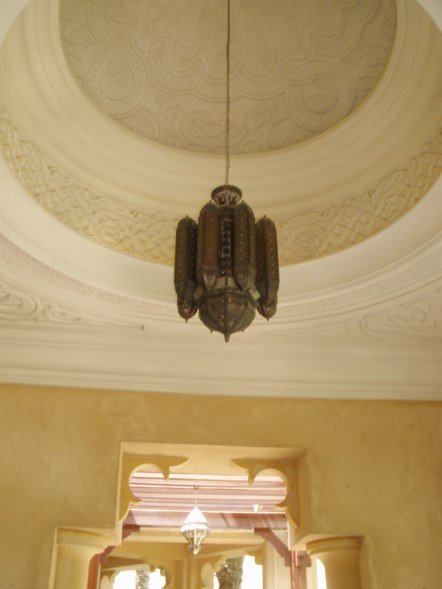 …to the beautiful chandeliers. 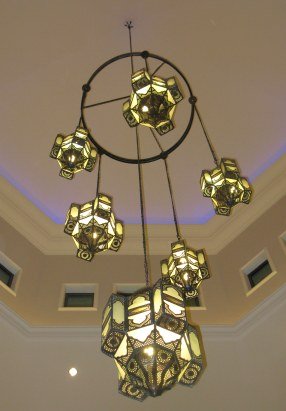 The light in the Souk filters down in coolness. 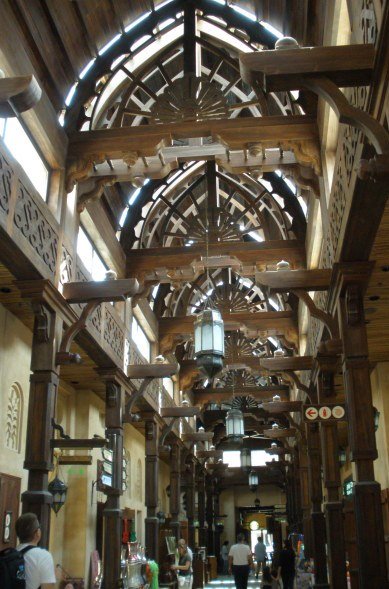 Although it seems quiet in Madinet Jumeirah –  you might still have to watch out for camels. 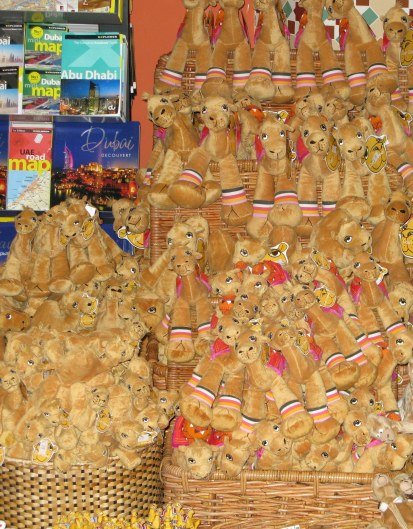 The Egyptians have a proverb that:

When a slave mounts a camel

he wants to ride on both humps at once

I hadn’t previously coveted a camel, but found these soft toy versions appealing enough to invite one home.

He resides with me still: doesn't eat much and smiles continually.

My little camel is known to keep company with a small and beguiling bunny who hopped into my backpack handbag with just whiskers and ears peeping out, en route home from a project in Helsinki.

If you get lost in Madinat Jumeirah, don’t try using this reproduction of an ancient map in the ceiling to help you, for it maps an earlier Dubai Creek than that which we now enjoy. 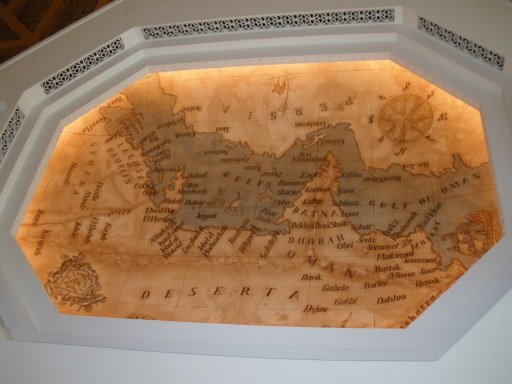 In Madinat Jumeirah there seem to be lots of entrances… 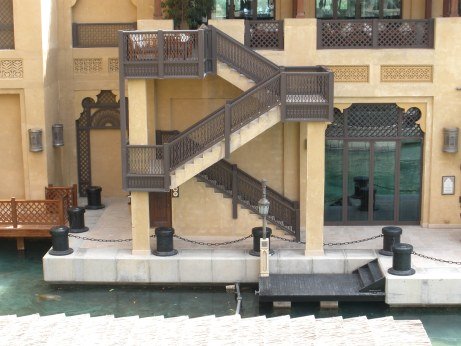 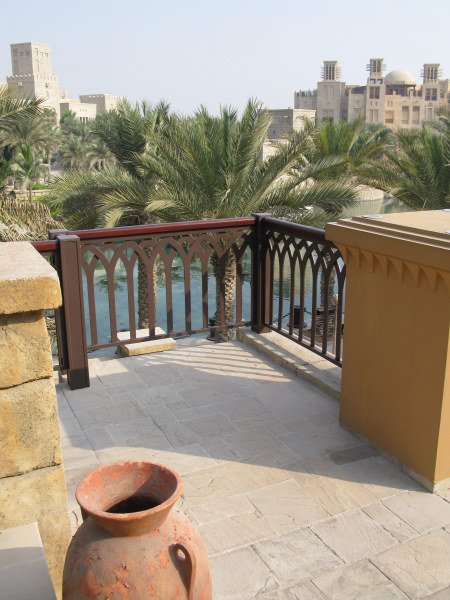 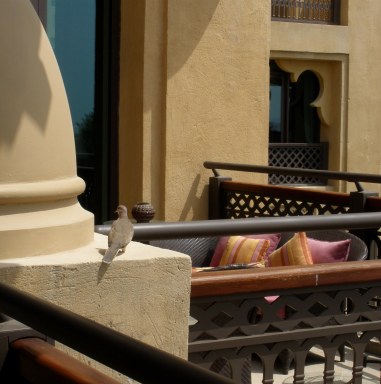 …where, like the birds resting on their migratory flyway which passes over the Emirates… 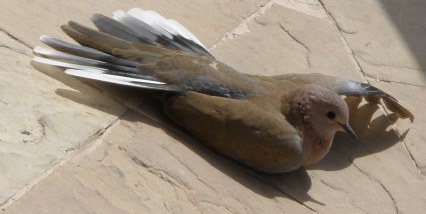 …you can bask in the sunshine - or better, take refreshments in the shade of one of the beautiful bars of Al Qasr.

Madinet Jumeirah coolness
in the heat of Dubai 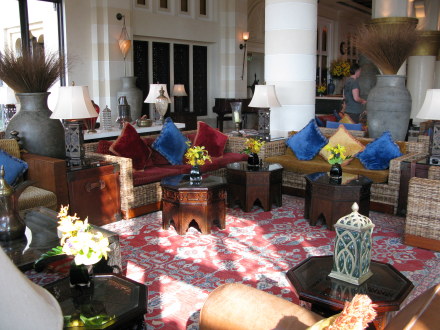 Madinat Jumeirah is a photographers delight – with patterns everywhere – even those of the palm frond shadows. 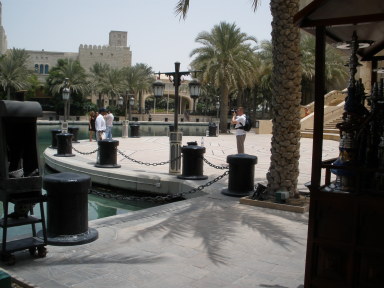 Whether you stay in the luxurious hotels of the complex, or just stop by for a shorter visit, Madinat Jumeirah will leave you with some wonderful imagery of an idealised Old Dubai. 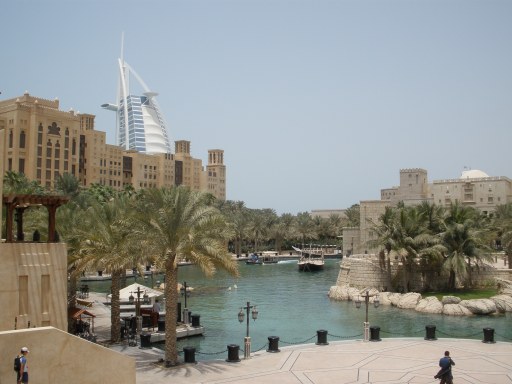 As the writer Terry Brooks said of his own writing:

Fantasy is the only canvas large enough

for me to paint on.

I guess if you are a land which is suddenly transformed by incredible wealth, when before the desert and its lore were all, you seek a big canvas on which to paint the fantasy of a life that may have existed only in dreams.