Beside the Gran Teatro in the centre of Havana's old town is the landmark Havana Capitol Building – el Capitolio. 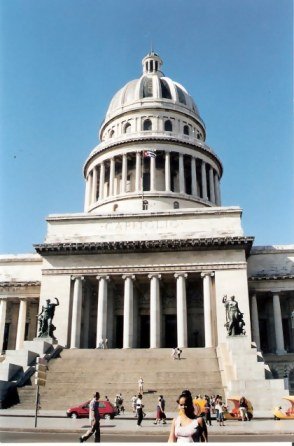 Built in a neo-classical style, el Capitolio is reminiscent of the American White House but in fact had its parentage in the design on the Parthenon. Its design is uniquely Cuban. 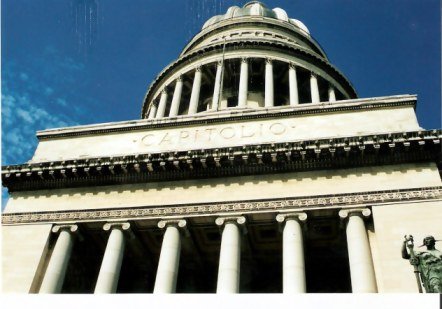 Until the 1959 Cuban revolution, the House of Representatives and Senate operated from here.

Then it housed the Ministry of Science, Technology and the Environment and after its elaborate restoration and re-opening in 2019 now houses  National Assembly of People’s Power, the legislative parliament of the Republic of Cuba.

When I was there one could just wander in after buying a ticket at the door but apparently now you need to buy your ticket from the tourist booth on the right of the door and jpin a tour. 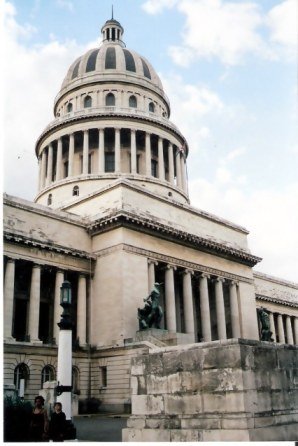 The internet at the capitol

On my first six visits to Cuba, a tired annex at the rounded end of the Capitol Building was where I went for my internet connection.

There are now many more options for a connection but none of them offer connection speeds that are approaching fast.

In the early 2000s you could stare out at this park while the slow connections toiled away and your Cuban friends, not permitted officially to have an account, eagerly watched over your shoulder.

Now that Cubans can have an internet account from which they can send or receive email (at a not low cost) the queues outside the connection points are long - as is the waiting time.

So, if your Cuban friends don't seem to be very responsive to your emails - recognise that they may not have enough money to connect, and may not have had enough time before the connection time timed out (which, given the slowness of the connections happened to me on the internet more than once just as I was able to see I had email - poof - time had expired), or they have just got to the queue too late. 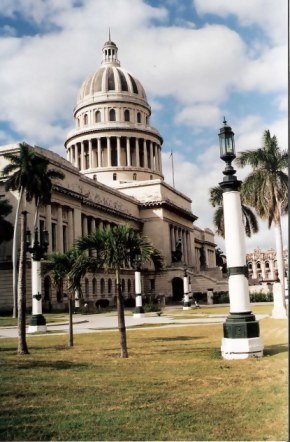 Terrace Bar at the Capitol Building

But in contrast to the worn out Internet section of the Capitol Building, on the other side is a lovely terrace bar - a cool place to relax in the afternoons. 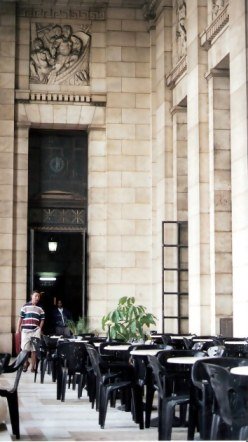 A Parthenon-like dome on the Havana Capitol Building

The Capitol is worth visiting as there is so much to discover within. It is something of a grand allegory of the hopes of a free nation - and the architecture and art reflect these aspirations.

In 2011 it was closed for renovations and I did not see any sign of when it would re-open. Finally, in March 2018 it was again open to visit - just in time for the selection of the next president to follow Raul Castro. The full restoration was completed by November 2019.

el Capitolio really is magnificent. Put it on your list of things to see in Havana.

The dome was inspired by that in the Pantheon in Paris. 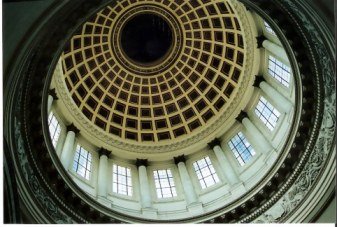 The Statue of the Republic
in the Havana Capitol Building

Beneath the dome stands the massive Statue of the Republic (La Estatua de la República) by the sculptor Zanelli, cast in 1929.

Once totally covered in 3 sheets of 22 Carat (92%) gold leaf, now mostly worn off, she stands ready to fight alongside her countrymen  with her spear, her shield, and wearing her Phrygian cap. This is a type of cap that, in the days of the Roman Empire, signified 'Freedom' and 'Liberty'.

Lily Valtry is generally attributed as being the model, but in fact while hers is the body - the face was modelled on Elena de Cardenas, one of the most beautiful women in Havana at the time.

The statue was moulded in three parts in Rome. It then travelled via Naples, to be reassembled in the Capitol building just a few steps from the inset diamond that once sat here to mark the zero point from which all distances in Cuba are measured (even today – but without the diamond, which famously disappeared in the 1940s, reappearing mysteriously in a desk drawer of the then President Grau). Reputedly the diamond is now stored in a safe place, a replica replacing it.

I don’t know about you but a 'safe place' in our household was always a code phrase for 'lost until found again by accident'…or 'Never to be found again'. 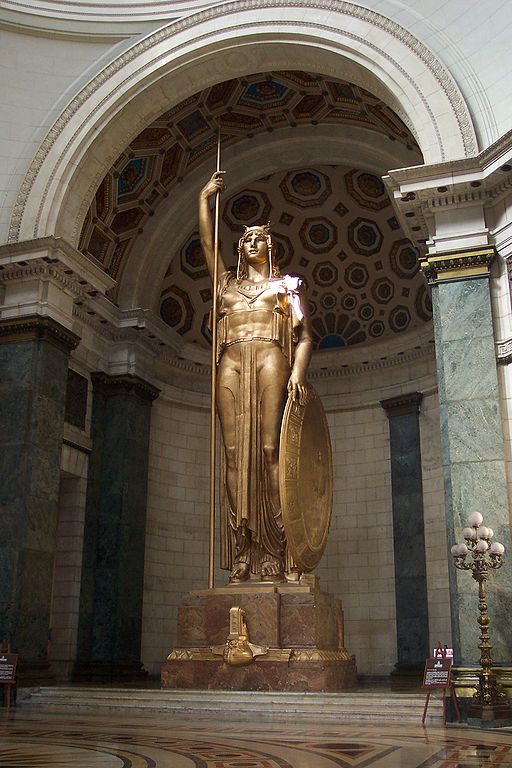 Once, it was the tallest internal sculpture in the world, but this was finally bested by that of Abraham Lincoln in the Lincoln Memorial.

The Havana Capitol Building:
Not a Trojan Horse -
but with a statue hiding a tunnel

There are springs inside to help support it and – a real secret Havana destination – has a tunnel into it from a room nearby. 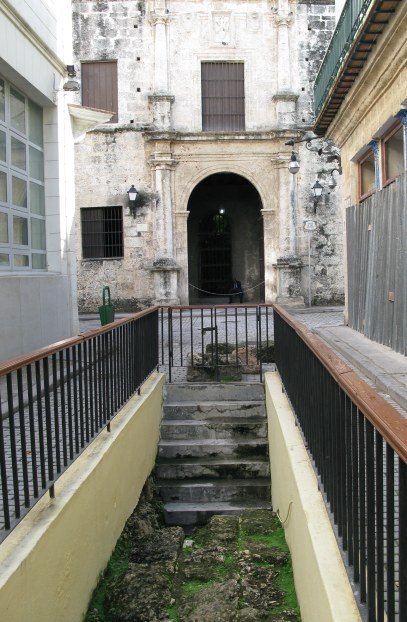 Like most secret tunnels, time has a way of unveiling the secret through other, less secretive works.

It is in this way that often local word-of-mouth stories are verified - and so it was here. In doing civic works the tunnel was revealed. 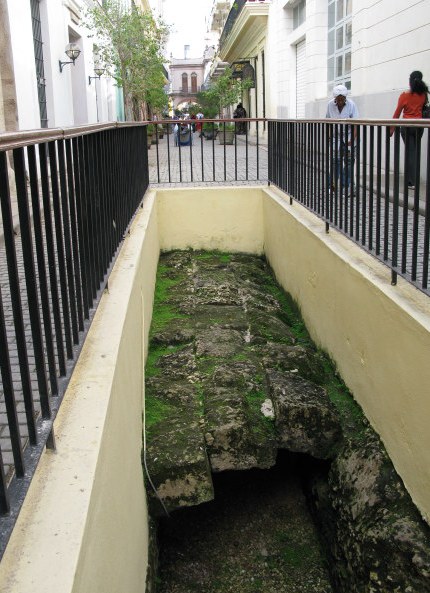 Hall of Lost Steps
in the Havana Capitol Building

Leading away from the statue, the Salón de los Pasos Perdidos or Hall of Lost Steps is magnificent – and true to its name, muffles the noise of footsteps. 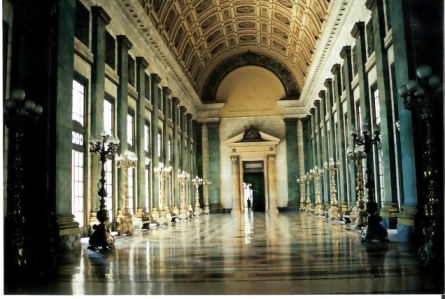 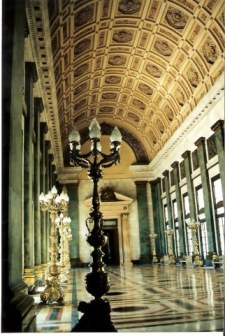 Equally grand are the meeting rooms above. 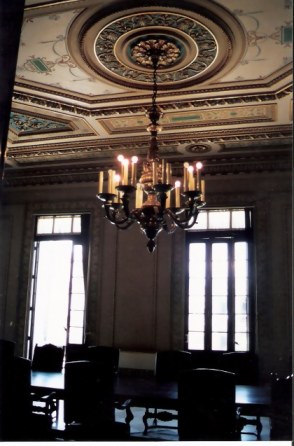 These have more fantastic brass candelabra and chandeliers – all with energy saving light bulbs! 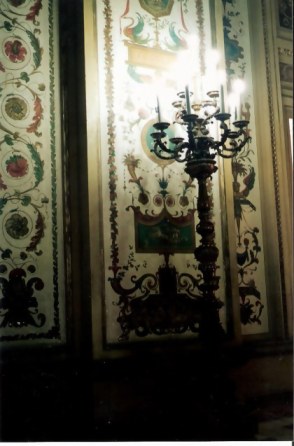 The Havana Capitol Building is a place full of pattern: on friezes, cornices, columns, and doors. 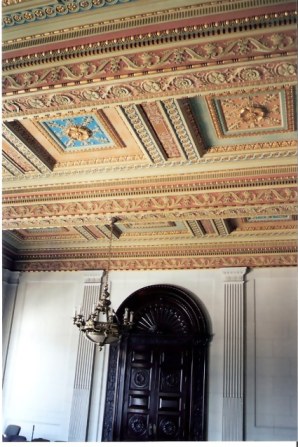 There are even patterns in the brass railings and grills. 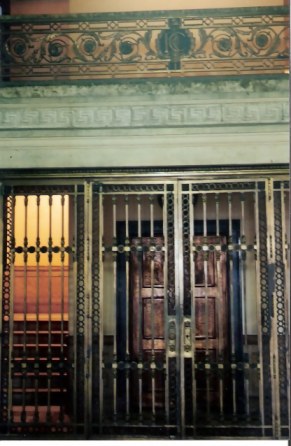 Each ceiling of the Capitol Building is a work of art in itself. 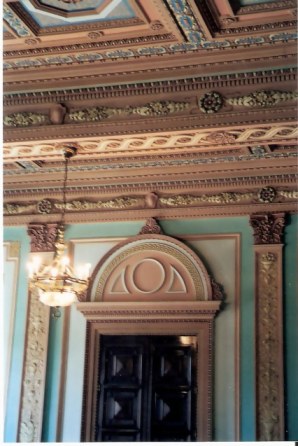 The Capitol Building of Havana:
a symbol of aspiration

Expectancy is the atmosphere for miracles .

When you visit El Capitolio, the Capitol Building of the Republic of Cuba that is once again  the seat of parliament, you will find it to be a place where art saturates the senses.

Here, it seems possible that Cuba is waiting to burst forward into a miracle of possibilities.