Both a canvas of colour and worthy of translating to canvas: Saint Denis on the island of Oléron reminds you to relax and absorb the moment

The east coast of the beautiful island just south of La Rochelle is sheltered and picturesque and here you find a small jewel: St.Denis d’Oléron. 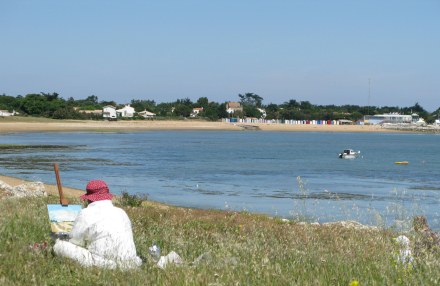 If I hadn’t stood behind this artist for a while absorbing the beauty of the scene he painted, I wouldn’t have known to search out the colourful beach of St. Denis.

There was plenty of parking available as it was pre-season and I wandered towards the sea, not being sure of my bearings having driven rather than walking or cycling the coastal path.

The colourful shed seemed a good indicator and it proved so to be. 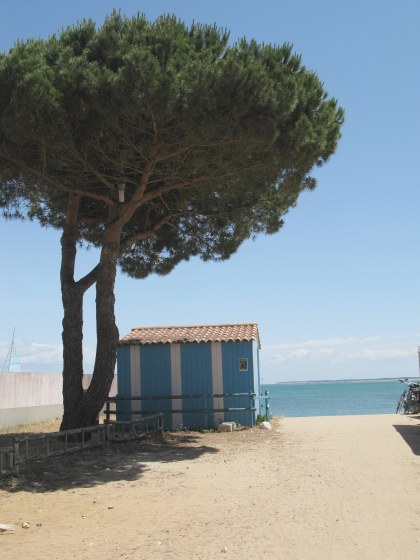 Within a few steps there just below the line of seagrass was the neat row of colourful beach changing boxes.

The colourful bathing boxes are a hallmark of Saint Denis d’Oléron. 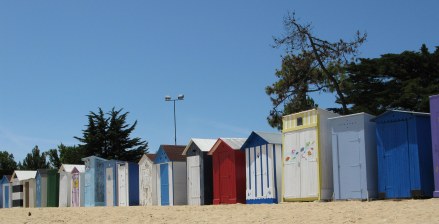 They are painted in unique styles and designs. 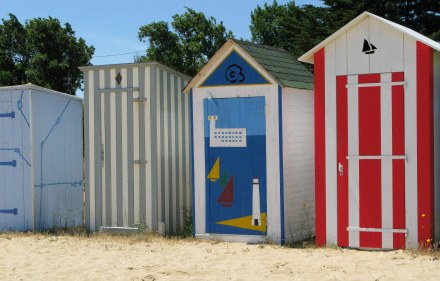 This makes a walk along the sand in front of them something of a lengthy affair, for you want to stop and admire each, even if just for the creative cutouts that 'air' them when not in use. 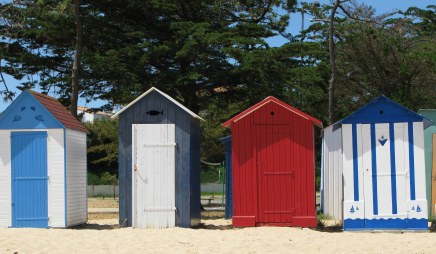 The actual beach doesn’t become that appealing until further along. 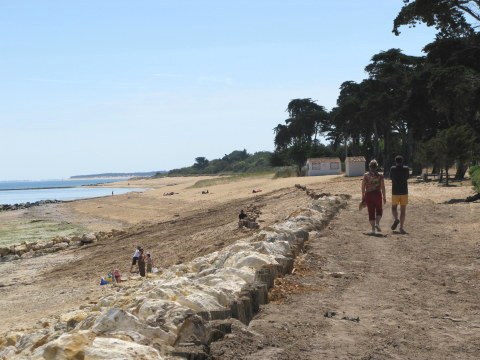 Beach walking dog owners provided with the necessary bags - so no excuses on the beaches and walks of St. Denis

Nevertheless the dogs don't mind: it is a much favoured dog walking spot.

There are signs with admonitions to 'do the right thing' and a supply of bags, so there is no excuse NOT to clean up after your pooch. 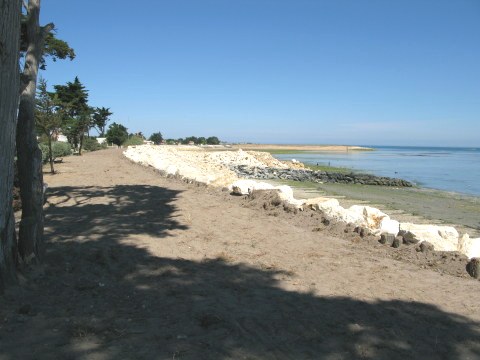 It puts a new meaning on the term 'doggie bag'. 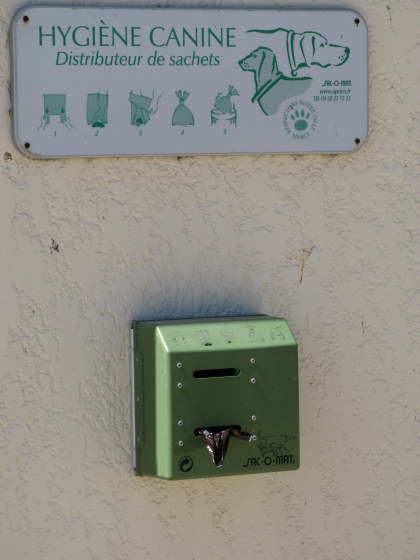 The tidal clock by which the island of
Oléron lives: tides and ancient stone fish traps

Before I came upon the artist I had stopped on the arching bay to look at the écluse, a clever fish trap that harnesses the tides and forms a secondary – and as has proved important – role in also protecting the island coast from erosion. 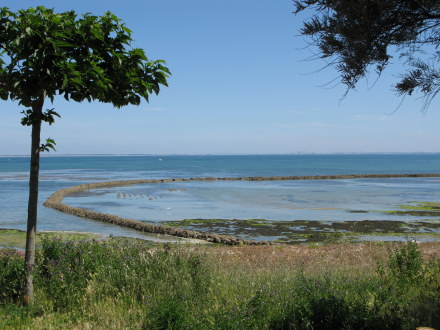 With the demise of the maritime importance of Oléron, by the beginning of the 20th century only 140 of these fish traps remained on the Isle of Ré and 180 on Oléron. The coast has suffered extensive erosion accordingly – increasing proportionate to loss of fish traps. On the Isle of Ré the number sank to 12 – and 14 on Oléron.

The fish traps are ingenious in their simplicity. The high tide fills the arched dry stone walls that hug the coastline. Fish are lured to the bottom by algae placed under stones by local fishermen, and the receding tide then drains the water, leaving fish captive within the walls.

By lantern light at night the licensed fishermen of the fish trap, the écluseur, wade in to corner the fish in their trilla or net and then, having used their espiot or hooked knife to kill them, they load them into wicker baskets carried on their back – rather like those of grape pickers, but with a narrower mouth.

Suctioned onto the walls are the shellfish that also enjoy their daily bath and form a sort of mortar for the dry stone walls of the écluse.

Along the coastal path by the écluse are interpretive signs. 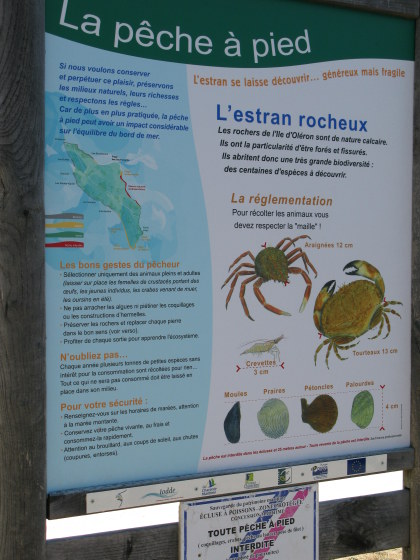 The smaller one at the bottom explains what may and may NOT be collected from the area in and around the fish trap – and by whom. 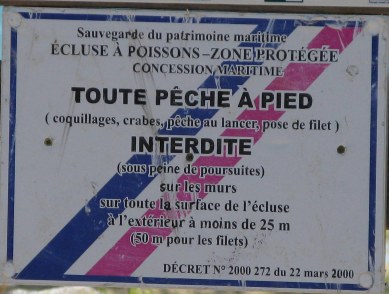 There are some delightful small former fishermen’s cottages above the bay. 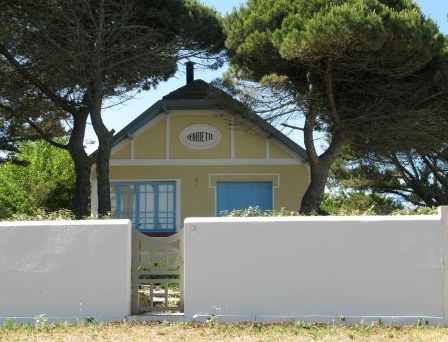 I imagined what a great life it would be to walk across the road in Saint Denis d’Oléron and down to the écluse, return with your catch, open a bottle of fine local wine and enjoy cooking the fish over pine needles to add to the flavour. 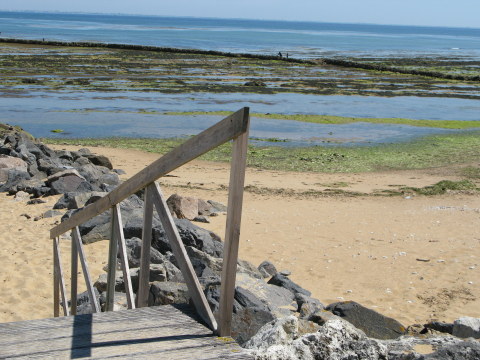 Then you could stroll back along the track and rest on one of the seats in the sun. 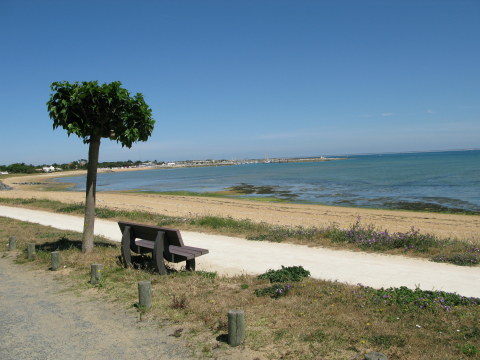 …or shade – and watch the sea in its timeless movements. 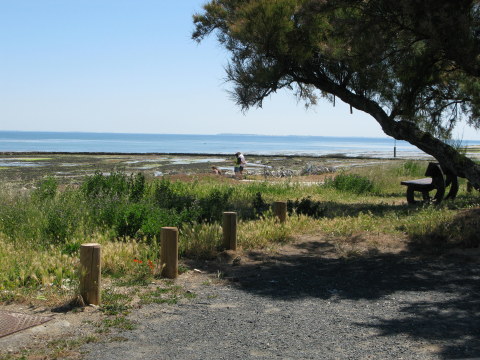 One of the more fortunate residents was able to build this multi-storied house on an island whose planning restrictions have for some long time banned anything but bungalow level building.

(I thought this a good thing - to protect the character of the island). 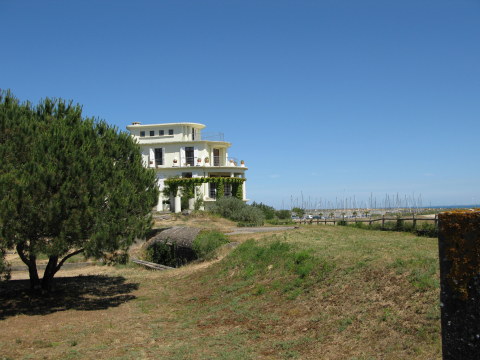 As I stood watching the fishermen exploring the treasures the tide had brought I remembered a quotation I like a lot and often use in reference to my ever-forward thinking mindset. 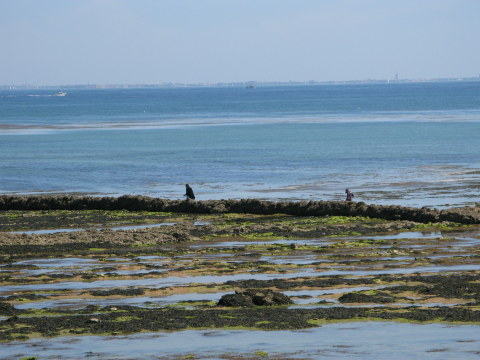 This is possibly the last line of the film 'Castaway', when Tom Hanks says:

If you are planning a visit to the lovely Île d’Oléron here is a tip.

You may live in anticipation of what the next tide may bring - in real life or metaphorically but - you can be sure that here:

will stay with you some time after you leave this delightful lesser-known French tourism destination.

Saint Denis d’Oléron should be on your map.