The island of Oléron is known to produce arguably the best oysters in France – and that is some claim!

Just beyond Boyardville on the eastern tip of the island signs indicate the ‘Route des huîtres’, the oyster route.

The road leads you to a picturesque area of reclaimed salt marsh where colourful shacks of the oyster farmers punctuate the landscape. 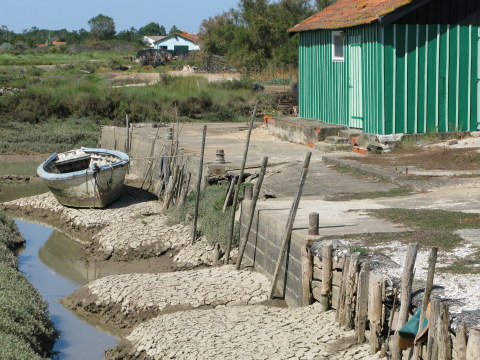 The hand-dug oyster channels vary in width. They are tidally washed – for it is here that the sea meets the fresh water created by the network of channels.

The work of keeping the channels operating is an art in itself and takes a great deal of manual labour.

Here the banks are braced with locally cut wooden stays. 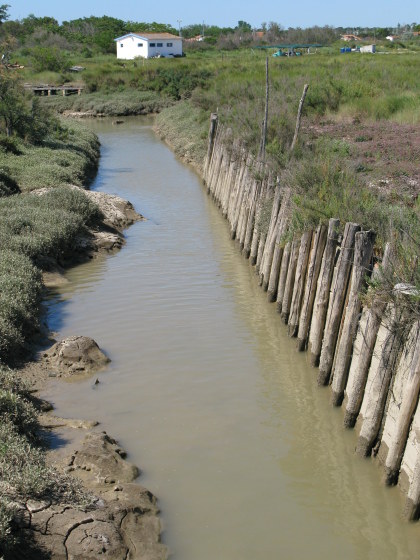 The Oléron oyster shacks were suffering the same fate as much rural infrastructure because young people are choosing other work directions than the hard manual labour of their fathers.

The shacks beside unworked channels were starting to fall into disrepair, so island government created an artists project to rehabilitate them – turning some into artists studios. 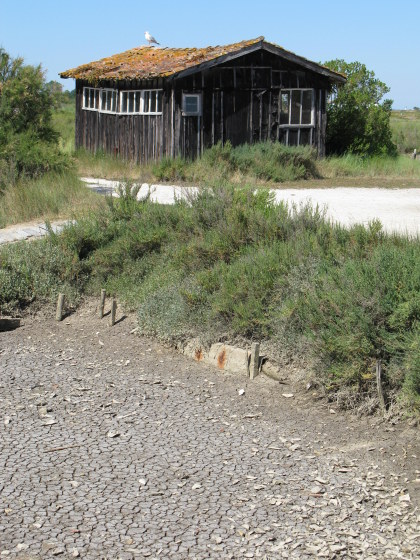 Having peeped into the windows of one… 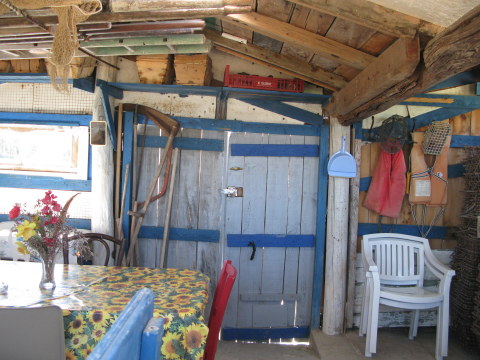 …it certainly was one artistic oyster farming family that decorated it! 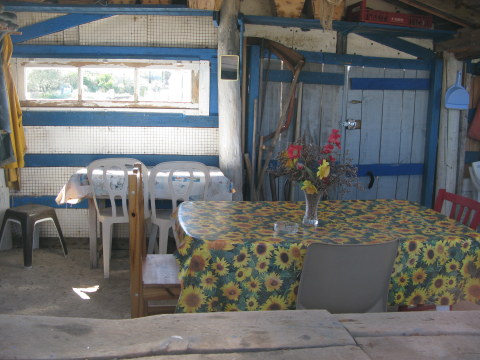 Art and the oyster route of Oléron

Those painting the shacks, or even painting within the shacks, were not the only artists in the area, for I passed this bit of artistic humour on a pathway between the channels.

Someone had carved a face into the tree stump, where it squinted towards the land like a seaman peering through the fog. 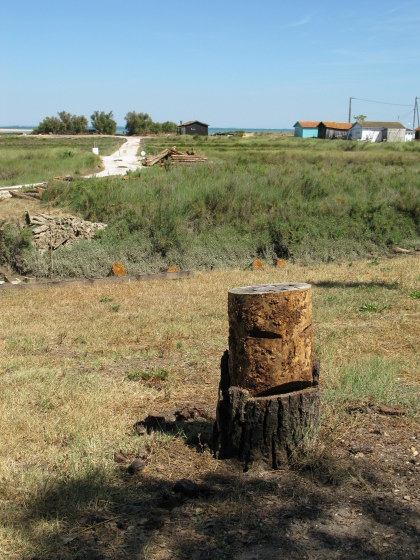 The newly roofed shacks are colourful. 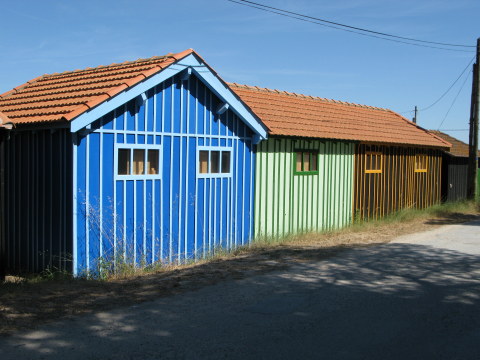 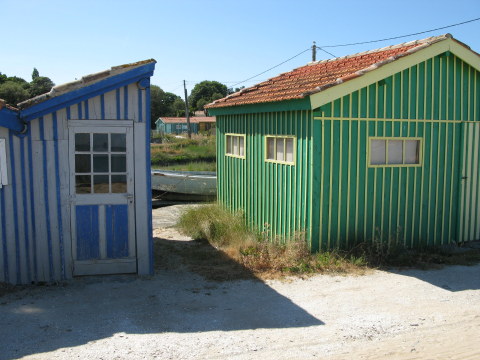 None were occupied when I was there - unless you count external residents - these snails forming curly embellishments to the coloured lines. 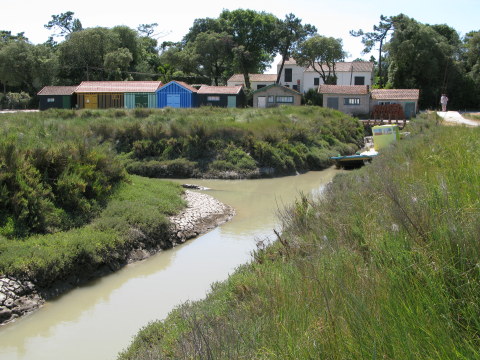 …where the flat bottomed boats rest between the tides. 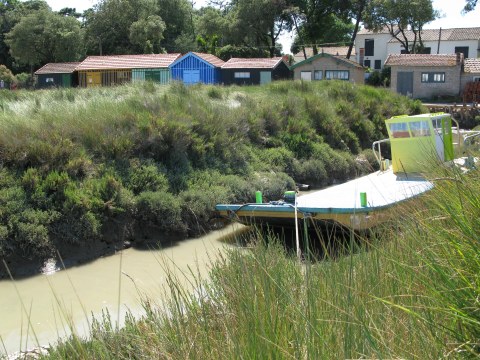 The working channels of Oléron reveal lifetimes driven by the tides.

Traditional fishing boats travel on the higher tide, and the flat bottomed boats take advantage of the low tide – possibly to collect the smaller shellfish, cockles, and the like. 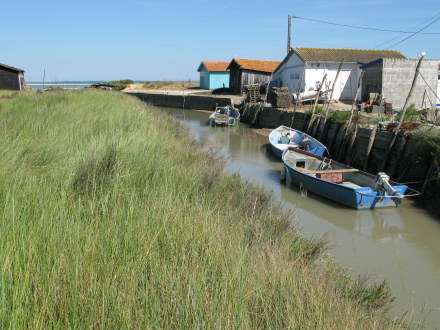 I headed out along a clay track and then on the rickety boardwalks beside the channels, and then both disappeared before I reached my destination. 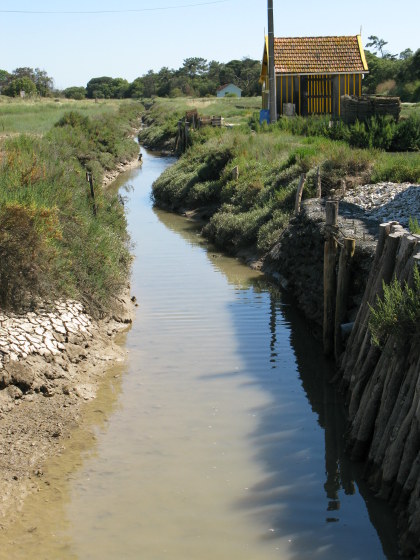 Dropping to the clay bank just above the waterline meant picking my way carefully, and peering into the mud, I saw that I had company.

A well camouflaged mud crab scuttled away, probably thankful that I was a hunter of pictures and not of seafood. 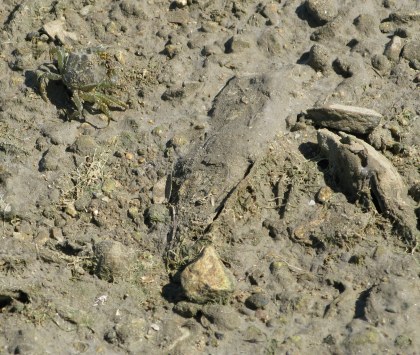 Further along the oyster trail, I came upon the stored working apparatus of the channels.

Here were banks of neatly stacked metal stakes for the beds, and further along, layers of the wire mesh sacks in which the shells would be stored. 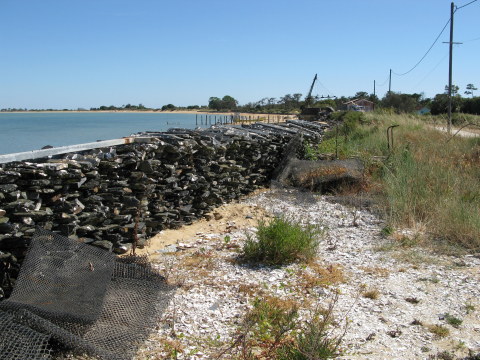 It is not only oysters that are gathered from the ocean bed to be seasoned by being washed in the nutrient-rich brine of the channels, or water pens.

Cockles, clams and oysters are also stored in the wire sacks and all are turned regularly during the seasoning process.

Each portion of land has a slightly different quality. The variations are created by varying depth, the nature of the currents, and the temperature of the water. This affects flavour and is what those with cultivated palates can discern in the oyster markets of Oléron. 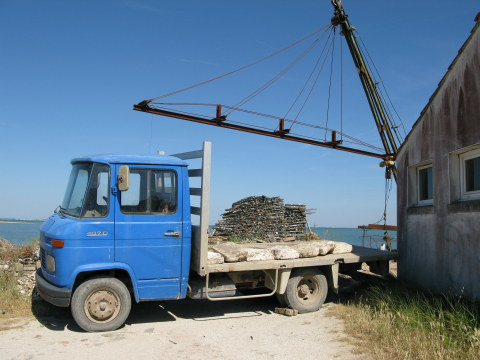 When filled, these mesh sacks must take some turning. 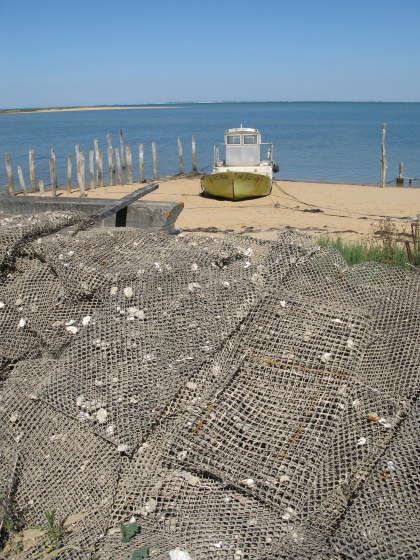 The process starts in the parcels of marine rights on which the oyster beds sit in the shallows of the sea around the coast of Oléron.

When the contents are considered to be at a stage of being 'fines', they are lean and salty.

At this stage they are brought to the salt marshes to be fattened on a nutrient rich mix of channel water in the water pens or claires. 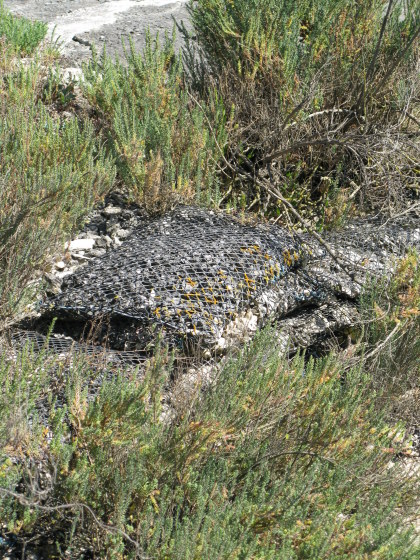 A resting place to grow fat and yummy: the claires of the oyster route

Not all claires are at this end of the island. Some are in other salt marshes dotted along on the winding road that runs down the centre Oléron.

There are many bridges that make great viewing platforms. 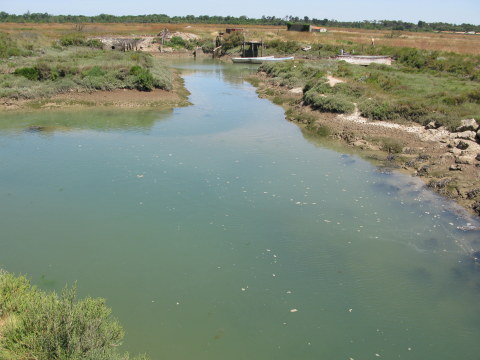 I stopped at one to have a look and spent a while watching a fish of some considerable size swooping into the shallows – apparently to devour unsuspecting prey for he was drawn back and back to the same spot and finally left with a decided flick of his tail.

You can see him at the bottom left of the photo. 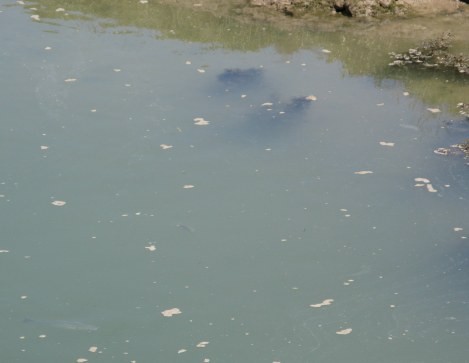 The claires have been dug by the various fishermen and beside many are small farm-door-shops selling the products to take away, or to savour on the spot.

Further up the island, the channels are quite wide in places, and although here the water looks quite blue, the seaweed Haslea Ostrearia in the water turns both water and oysters to green. 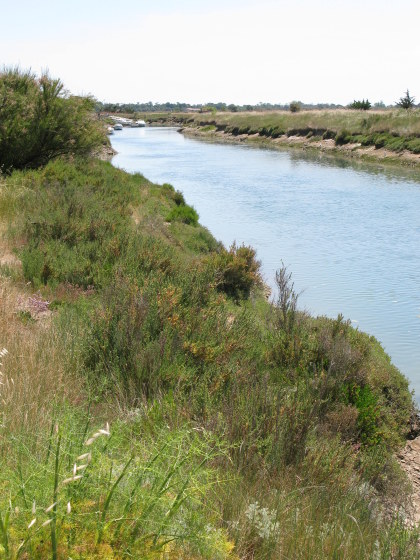 Where the oyster farmers call home: Ors on the oyster route of Oléron 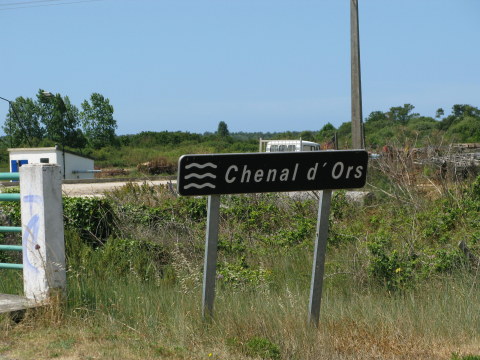 Here the Oléron oyster farmers live in a dense channel-side community close to the tip of the island. 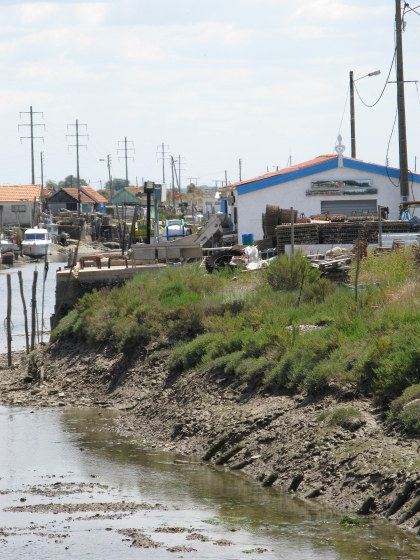 I spent some enjoyable and relaxed time wandering the salt marsh water pens of Oléron and looking at the simple fishing shacks.

During the whole time on this lovely island I kept thinking of the saying of Confucius:

but we insist on making it complicated.