Remedios Cuba
and its two churches

Due to the influence of one of the roaming Cuban Holy Mothers, Remedios has two churches at its centre

Remedios is the only town in Cuba to have two churches at its heart and the reason it does comes down to yet another of the famous Virgin Mary statues of Cuba.

The Iglesia Buen Viaje was built specifically because of the apparent preference for the location of the Virgin of Good Voyages, the statue of the Holy Mother that was found by fishermen. It was therefore named after her. 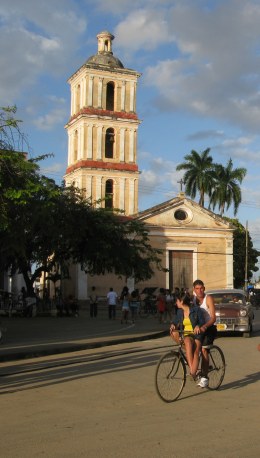 The arrival of the Virgin of Good Voyages in Remedios

This is the way the story goes:

While at sea, two fishermen saw a floating box that was almost a metre long (3 feet).

Rescuing it, they opened the lid to find a beautiful statue of the Virgin Mary with the baby Jesus in her arms.

They decided to reflect their good fortune on this voyage in discovering such a relic, and hers in coming safely back to port, by calling her the Virgen del Buenviaje (Good Travel).

The fishermen packed the statue on a mule to bring her safely to the priest.

However,  for reasons variously attributed to the mule being too tired to carry on, or just that the load shifted, while en route to the priest, the statue fell to the ground close to a hermitage where a paralyzed former slave lived.

The statue was left in his care and he was supposed to tell the parish priest the next day.

Apparently, although the hermit didn't advise the priest of her arrival, local people discovered her and made the Virgin a makeshift altar. Here, they placed flowers and candles as they prayed to her.

The returning fishermen discovered that their Virgin had not been registered with the parish priest and came to fetch here, returning her in a parade to the parish church of St John the Baptist where she was blessed and placed on the altar. The church was duly locked.

The next morning the Virgin had departed the church and was back with the hermit.

She was returned to the church, but once more she apparently preferred to spend the night at the Hermitage, despite being locked in the church before the priest departed.

Perhaps she appreciated the simple homage given her by the townsfolk, for this seemingly miraculous transit from the church to the Hermitage was repeated several times.

After satisfying themselves there was no skullduggery in the events, the townspeople decided they should accede to the wishes of their Virgin Mary and make a proper church at her preferred location, so she could reside there with appropriate reverence.

However, on Good Friday in 1862, a fire that started at the altar of Iglesia Buen Viaje rapidly spread to completely destroy the church and with it, the Virgin statue inside.

Fortunately, it had previously been established that the original statue was carved in Barcelona, so a replica was duly commissioned.

This new statue of Our Lady didn’t have the same attachment to the old location. Once duly installed in the more beautiful baroque church of St John the Baptist, she has been happy to stay there ever since. 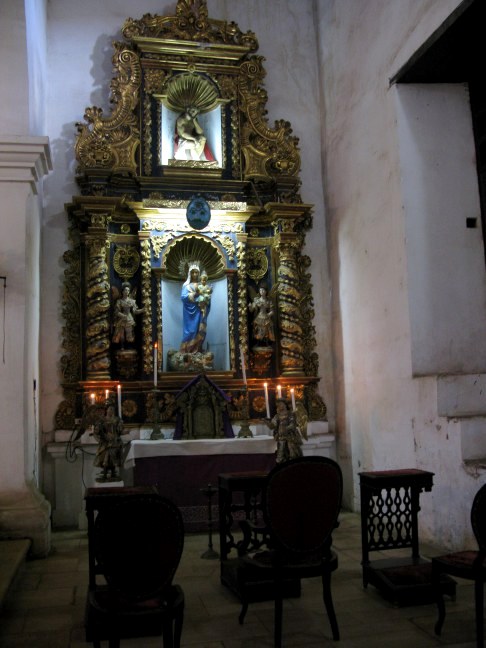 The Iglesia Major of San Juan Bautista with its neo-classical exterior and baroque interior style was built in 1692. An earlier stone church on the same site is recorded by Bishp Juan del Castillo in 1570.

In the 18th century, during architectural restoration, religious services were temporarily transferred to the Iglesia Buenviaje across the square.

During this work, the sacristry and side chapels of Loyola and Rosary were added, and the main body of the church enlarged. A tower was also added, but it collapsed in 1793. 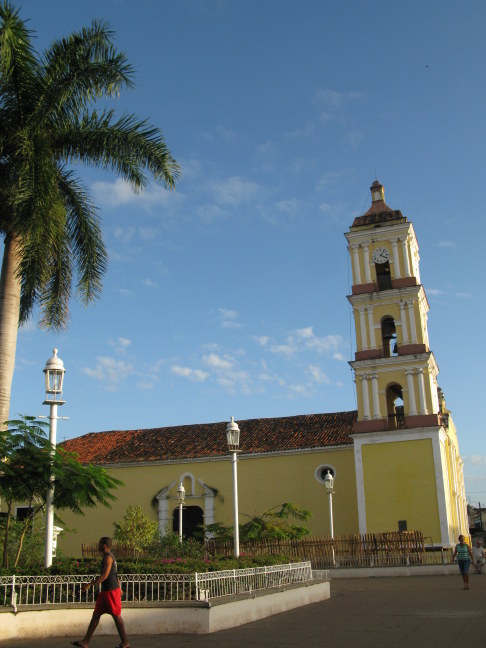 The thirteen golden altars of The Iglesia Major of San Juan Bautista were what an insurance company would call an 'Attractive Nuisance'.

They were so laden with gold that they constantly attracted buccaneers and pirates. 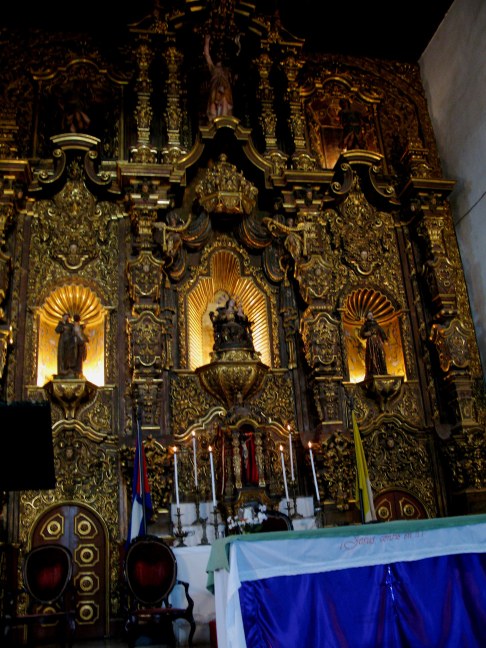 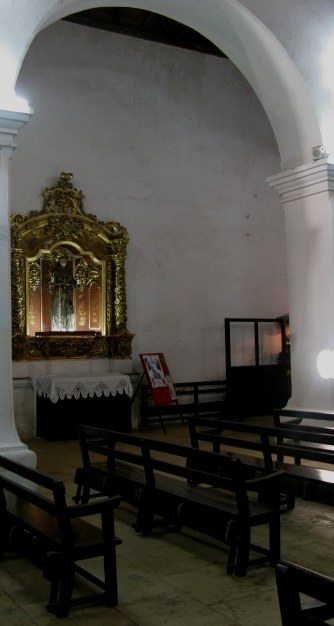 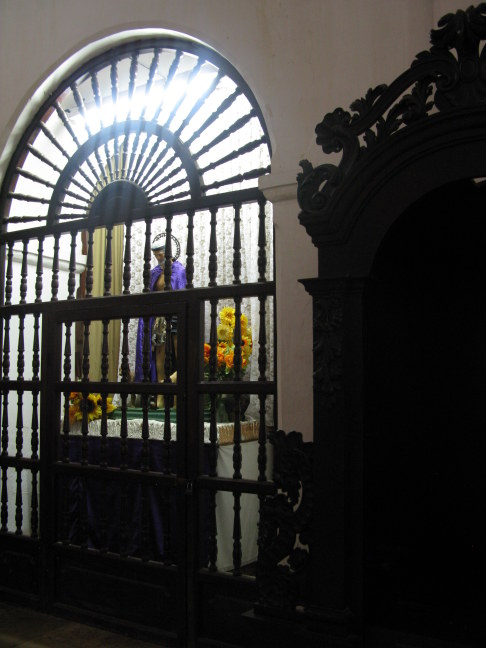 When I visited the Iglesia Major of San Juan Bautista it was close to Christmas and the church was festooned with enamelled chains of poinsettias. 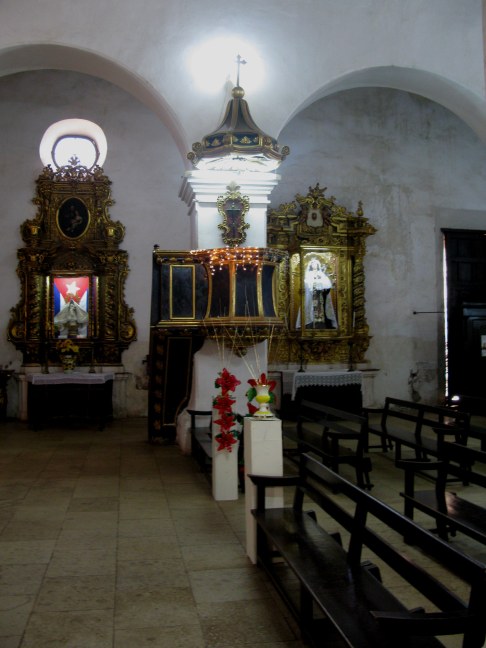 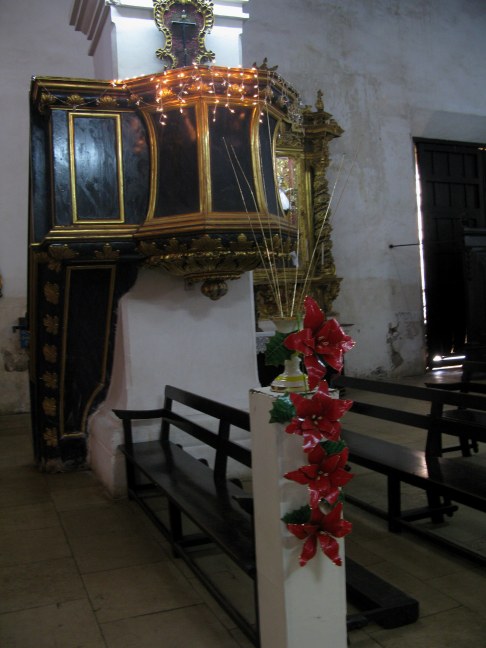 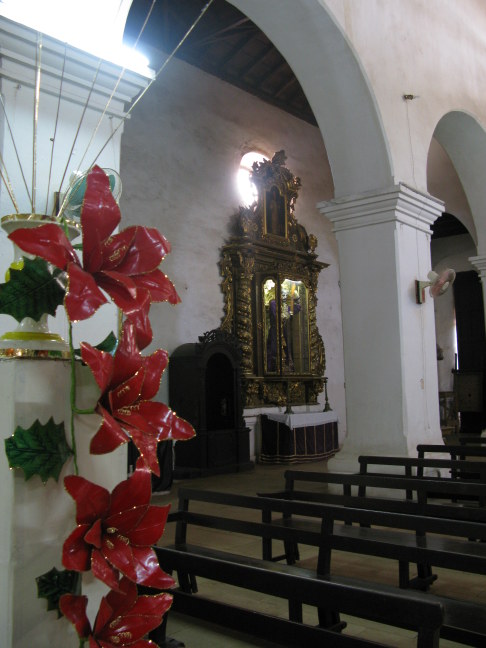 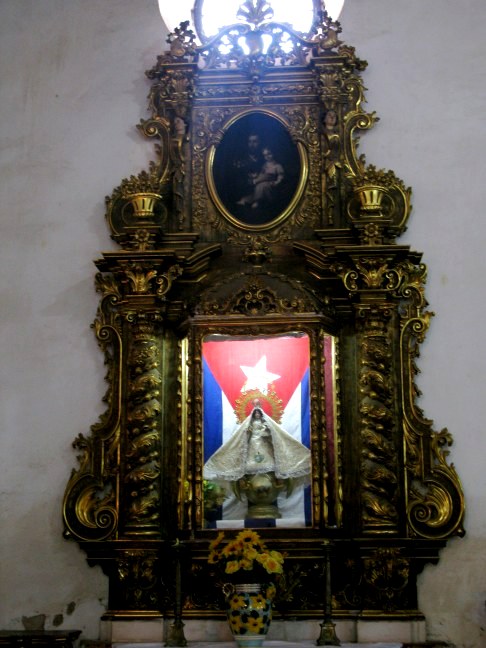 These altars attracted many marauders, but the most infamous of the marauding buccaneers was born in Les Sables-d'Olonne in the Vendée region of south west France.

A period of bloody “indentured service”- not much different from slavery – led this much feared marauder to his buccaneer life.

Born Jean-David Nau, he later became better known as the buccaneer François l'Olonnais who earned the bitter reputation of being the bloodiest of all sea-faring raiders.

A buccaneer was not a pirate. He was in the service of a government, and so it was with François l'Olonnais who was given a ship by the French to attack the Spaniards.

In the early years following Remedios being granted its charter as a town in 1550, it was known by a sequence of names:

It is known that in 1658 François l'Olonnais attacked a town called 'de los Cayos' in Cuba and this was probably the early Remedios.

François l'Olonnais and Remedios - a bloody attack and later, some sort of justice - equally cruel

Records variously attribute the following incident as being either in Remedios or on the Island of Tortuga:

Terrified by the arrival of François l'Olonnais, locals sent for help from the Governor in Havana. François l'Olonnais lay in wait for the ship sent by the Spanish to deal with the invaders – even carrying their own hangman on board to deal out summary justice.

After a vicious battle on the ship’s arrival, François l'Olonnais decapitated the entire crew but one.

This survivor bore a message the governor of Havana to say that François l'Olonnais would never give quarter to any Spaniard and that he had “...retaliated the kindness you designed me and my companions”.

François l'Olonnais was particularly vicious. Rape and torture of particularly extreme sorts were rampant throughout his exploits.

Maracaibo in Venezuela was described as hell on earth under his dominance. His favourite torture was to tie ropes around a person’s head until their eyes were forced out. He is also widely recorded to have sliced out hearts from living people and gnawed on them.

Eventually, after wreaking havoc on many cities including Gibraltar, he was barricaded by sea by the Spanish. He then headed up the coast on a raft.

Ironically, the end of François l'Olonnais was in the style of the torture he dealt out throughout his life.

While on foot trying to escape the Spanish he was foraging for food with his crew, when captured by a Kuna (or Guna) tribe who sliced him slowly into small pieces. 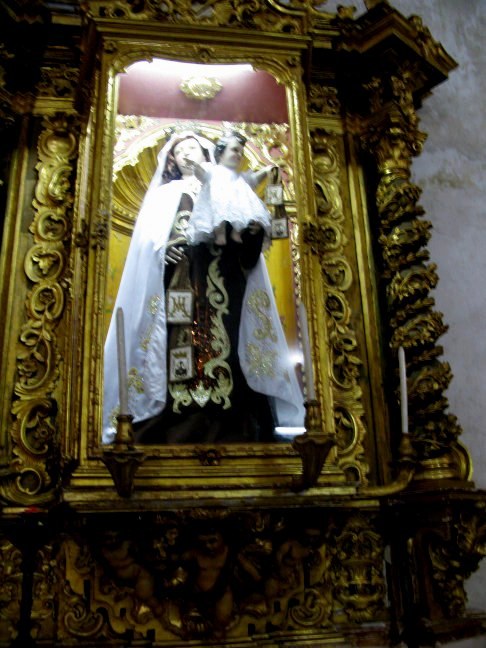 Perhaps his impending arrival was the cause of them being painted over with the white paint under which they languished unobtrusively from the 1600s to around 1944 so they could no longer tempt fortune hunters.

The disguise was effective, as was the false ceiling hiding the magnificent Mudéjar style roof.

The Mudéjar style was a remnant in Spain from Moorish rule and its patterns and styles became incorporated into local buildings especially in Aragon and Castile.

The golden altars and Mudéjar style roof were only revealed during the surveying undertaken by Cuban millionaire Eutimio Falla Bonet when he committed to restore the baptismal church of his ancestors. 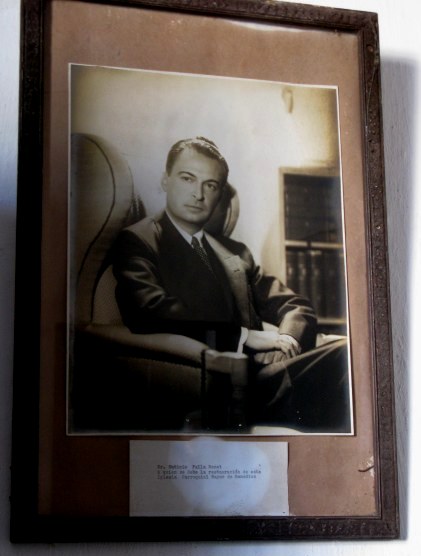 Eutimio Falla Bonet was born in 1905 to a well-respected family in Cienfuegos.

The family moved to Havana to facilitate the better education of their children and to have them move in the higher society of the capitol.

Although from a pure Spanish heritage, Falla Bonet was fascinated with the history of the Cuban people and made well-documented studies of genealogical heritage of the island.

For reasons not documented he declined the title of Marquis offered him by the King of Spain for his work.

A philanthropist and lover of architectural heritage, Falla Bonet had come to Remedios from Santa Clara.

There, he had discovered that his ancestors were the early founding fathers of the town after moving from Remedios, probably following the events of 1682. This was when land-owning farmer and priest, one Father Gonzalez de la Cruz whose profits were sinking due to regular pillaging, declared that satanic forces had taken hold of the town.

The good afther insisted that people should leave the town.

Not all residents agreed, even when the priest was able to obtain a Royal Decree transferring the settlement to a new location.

Only 37 Remedios families left but it was they who formed the new settlement of Santa Clara.

The restoration of the Church of St. John the Baptist undertaken by Eutimio Falla Bonet is said to have cost $1million for there was much to do.

The Medvedev–Sponheuer–Karnik Scale is, for obvious reasons, universally known by its acronym MSK.

This is the scale that evaluates macroseismic intensity of the severity of shaking of the ground during earthquakes. The scale only goes up to XII (12), so the earthquake must have caused considerable structural damage.

The archives Falla Bonet may have consulted are today stored in the beautifully tiled area as you enter the church. 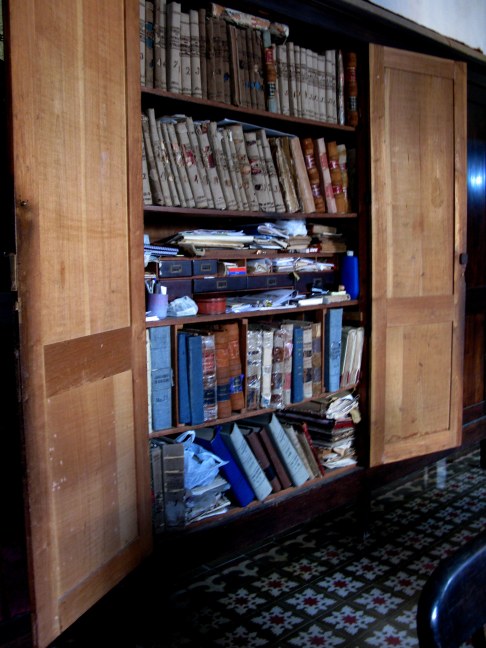 The Franciscan church of Iglesia Major of San Juan Bautista

You come here from a more humble entrance with its resident Franciscan monk, for St. John the Baptist has been a Franciscan church for centuries. 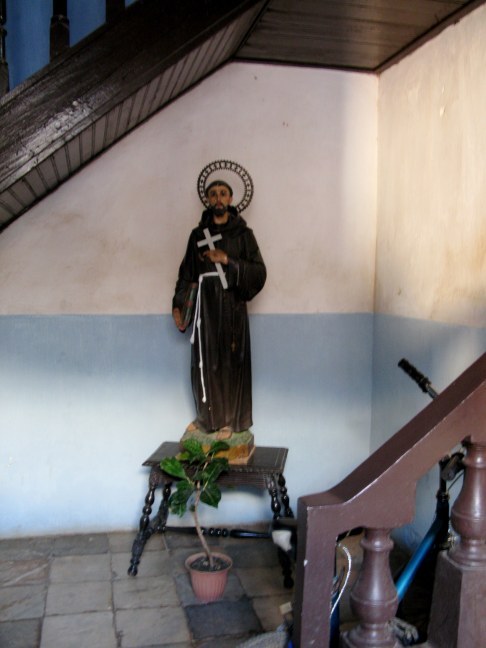 In restoring the church to its former glory Falla Bonet is reputed to have despatched the architect Aquiles Masa to Mexico and Peru to make copies of famous altar pieces.

The majestic altar we see today was carved from designs inspired by these gerat altarpieces over a period of two years. The artist was a highly regarded restorer called Rogelio Ata. Once carved, the whole altar was covered with 22 carat gold leaf.

At any rate it is now spectacular. 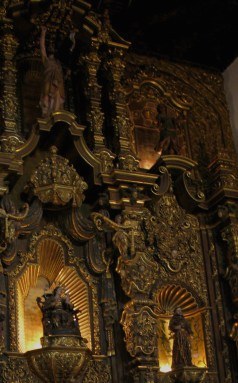 During the restoration the ceiling and decor were restored, as was the font.

Iron supports were replaced with turned wood and the original style of column restored. 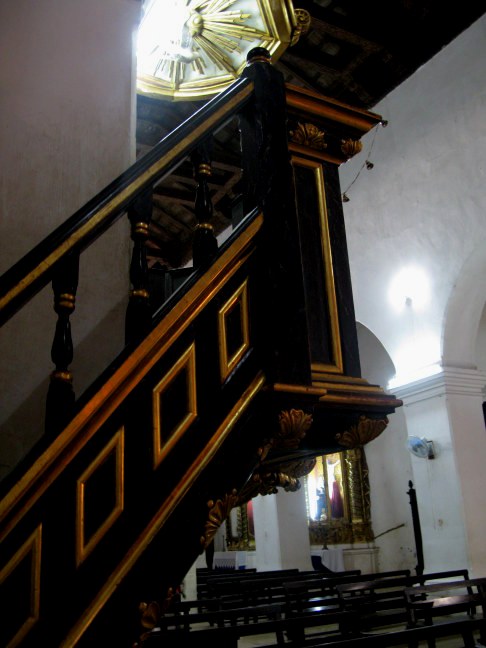 The rectory was rebuilt with a curved façade in the style of the rest of the town, with high windows and balconies.

The 30 metre high tower (100’), was decorated in different classical styles on each of its three levels: Doric, Ionic, and Corinthian. 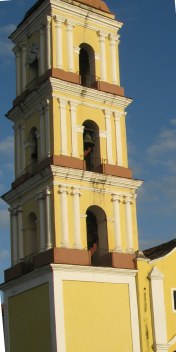 The Polish-American architect Daniel Liebeskind who has extended historical buildings as well as creating some to  house historical collections, memorably said:

is not to parody history,

but to articulate it.

Eutimio Falla Bonet seems to have subscribed to this philosophy – and perhaps also to that of Canadian communications designer David Craib, who said:

It should always say,

Perhaps it was in that vein that Falla Bonet brought a Castillian statue of a pregnant Virgin Mary in flamenco dance posture to reside in Remedios within the Iglesia Major of San Juan Bautista. 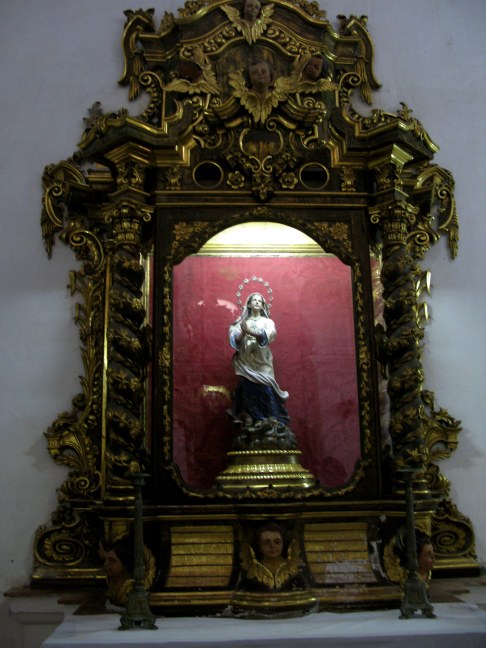 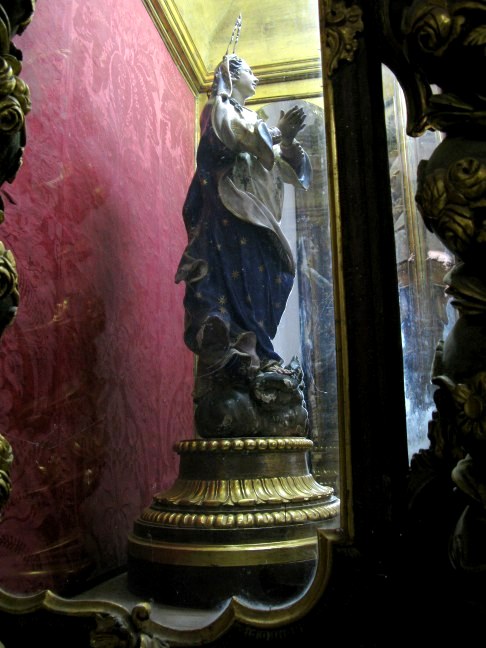 In a world of stilted impressions of an idealised Virgin Mary, to me it is refreshing to see that Falla Bonet wanted us to see a young woman of passion who shared a passion for life and danced with delight, just as do the people of Cuba.

I would believe only in a God who knows how to dance.