I used to belong to a professional association within Europe that had the art of choosing carefully for our meetings.

It was in this way that we had the good fortune of being located in the Blu Meeting Room of Castello di Clanezzo, about 10 km (just over 6 miles) from Bergamo and 50km (about 31 miles) from Milan.

The villa sits in the Ubione mountains above the confluence of the Imagna and Brembo rivers. 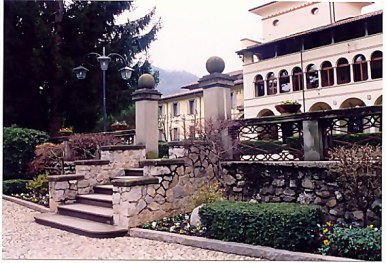 Castello di Clanezzo was built in the 11th century, but in fighting during the 1400s the fortress was seriously damaged, not being rebuilt until many years later.

The rebuilding was done by various families in succession, but it was not until 1989 that it was completely renovated.

Sadly, the couple who had most recently re-energized this lovely place died in the Linate plane crash in 2001, along with their youngest son.

Castello di Clanezzo is now run by the three brothers. 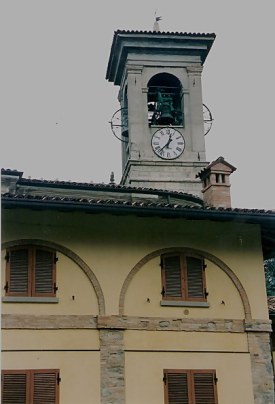 Castello di Clanezzo is serenity itself, where time is marked out in hours by the bells of the tower.

It is a place where everything has character – even the chimneypots! 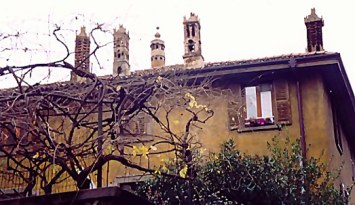 As we drove higher up the mountain range, I wondered about the history of these buildings over the many years of their existence. 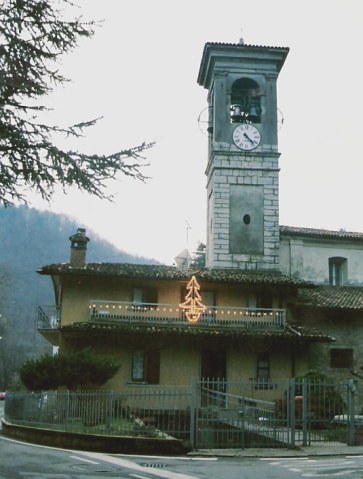 Castello di Clanezzo - caught in the war between Guelphi (church) and Ghibellini (state).

This strife being not enough - the Guelfi or Guelph were again divided into two factions: the Blacks and the Whites.

Their struggles appear in Dante’s Divine Comedy, with the character Mosca dei Lamberti suffering in hell for the rift he has created.

Wikimedia at one time displayed this image of the Guelphi and Ghibellini in full battle array. I would attribute further but cannot again find its reference. 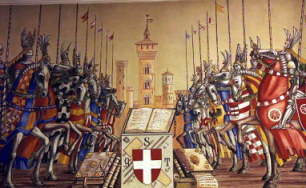 We all know of at least one Ghibellini

This was a time when Italian super companies had far reaching influence – acting more or less like merchant bankers with a commodities market - and Italian noble families were well known throughout Europe for their canny investments and influence.

Just as does the story of Romeo and Juliet, the history of the Principality of Monaco stems from these conflicts. The now reigning family of Grimaldi being Guelphs, driven out of Genoa by the victorious Ghibellini.

Borders of the 12th and 13th century were different than now, and though this is an Italian tale - it is influenced at origin from rivalry between the House of Welf (Guelph) in Bavaria and the Imperial House of Hohenstaufen.

The Guelph heritage has included many German and British monarchs, including Germany’s three Henrys – the Black, the Proud, and the Lion, the latter marrying the daughter of another Henry – Henry II and his French wife, Eleanor of Aquitaine.

The Welf dynasty continues today – its head, Ernst August, being the husband of Princess Caroline of Monaco.

Equally proud is the legacy of the Ghibellini – their ancestral seat being in Waiblingen (Ghibelline) near Stuttgart, in what was then known as Franconia.

The Ghibellini were originally Dukes of Swabia. Their Duke Otto, born in 0098, was also a Marquis of Verona. Three of their kings were crowned by the Holy Roman Emperor and in 1194 they became Kings of Sicily.

Frederick II, who inherited the crown as an infant, returned as an adult to take up the Swabian (German) monarchy. However, having grown up in Italy, he spent most of his time there, where his business interests lay.

Being effectively without a monarch, the German nobility continued to carve up the land between them, leaving schisms that last between regions to this day.

However, the Ghibelline most of us know best we met through a Christmas song:

Although the struggle between church and state that began in 1075 officially ended with the Concordat of Worms in 1122, the Guelfi and Ghibellini continued their strife until well into the 15th Century.

The history of their battle for prominence has left marks in the cities of their dominance. These retain even now the symbolic insignia of these factions and their connection with them.

Nearby Bergamo was variously representative of both sides during its history – but was predominantly Ghibelline.

In the 14th and 15th centuries Castello di Clanezzo was a strategic location because both factions struggled to control the Brembilla Valley and as a result it was left in ruins after the fighting, only being restored many years later.

The chapel and mausoleum must have seen much grief – but perhaps also much joy, as it is now a popular place for weddings and christenings. 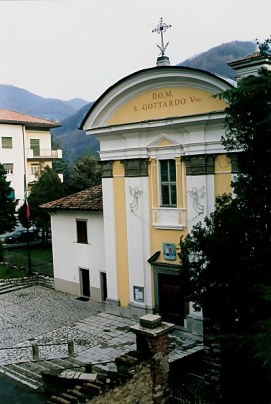 The pathway to the river from Castello del Clanezzo

From Castello di Clanezzo there is a path of carefully laid water-smoothed rocks leading towards the river below. 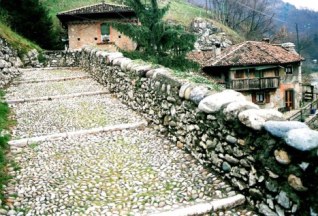 This led us past a small shrine on a zig-zag route down a steep hillside. 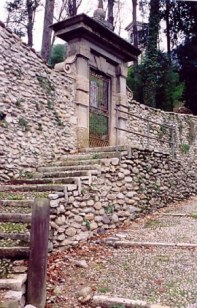 It is one of those walks which makes you have no wish to hurry.

Small flowers were starting to bloom in the winter thaw. 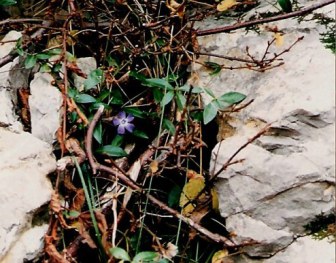 Eventually, the path led down on one side directly to the river Brembo. 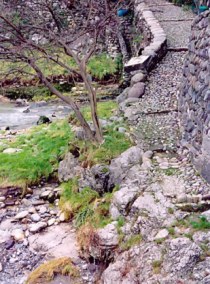 On another, the pathway led us on downwards to the Ponte che Balla – a suspension bridge. 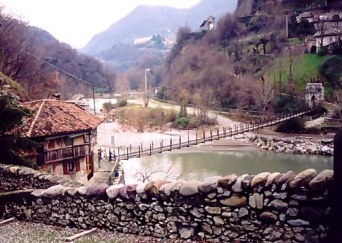 There is always a sense of childlike awe and discovery that pulls you towards a suspension bridge!

I remember my brother and I taking a short-cut to school over one that was officially closed due it missing several slats on its surface.

We climbed over the fence. He climbed first and I then handed our two school cases over the top and once on the other side, case in hand, we blithely walked across over a deep canyon.

Someone must have heard about it – or perhaps my big brother realised mid-bridge that this was not such a good idea.

Whether by parental admonition or dawning realisation of the danger by my brother, we never did it again. 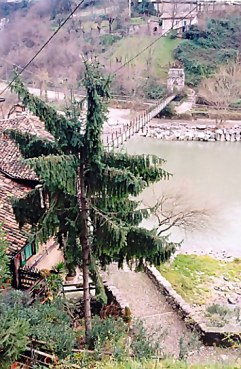 The suspension bridge here is hardly on the gigantic scale of the Ponte Messina, the controversial world’s longest suspension span (3,300 metres or 2.05 miles – about 3 times the span of the Golden Gate Bridge) that is proposed to link Calabria and Sicily over the Straits of Messina.

That bridge project was closed in 2006 under Prime Minister Prodi, restarted in 2009 under Berlusconi, and cancelled again under Monti.

Joining these two shores is not a new idea.

The Romans wanted to do so using barges and barrels.

Charlemagne wanted to use a series of bridges.

Others investigated tunnels and suspension bridges, but there remains today no bridge to Messina.

The attraction of a suspension bridge

A suspension bridge is not just a join between two geographic points  – but also that between the child and the adult within us.

The last section of the walk was steep but the ochre Bridge House beckoned us towards it.

I was interested that in a group comprised of German, Italian and English men and one Italian and one Australian woman - each found the enchantment of the suspension bridge an instant attraction. 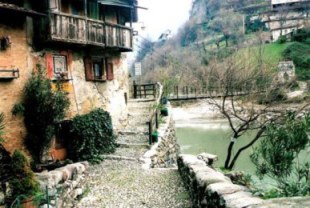 The side wall has enough places from which guns could protrude during the bloody history of the valley. 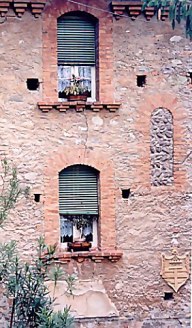 The peeling facia reflected a sense of confusion over the house number.

Was it actually Number 2 or Number 3?

No doubt the locals knew.

Whichever number it was – I wondered what the street was. 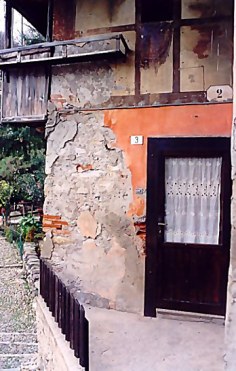 From the bridge I looked back up at the zig zag path down which we had come.

The observer, when he seems to himself to be observing a stone,

is really, if physics is to be believed,

observing the effects of the stone upon himself. 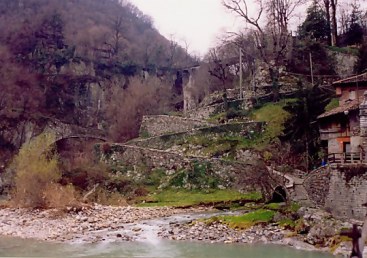 Here, in Lombardy I had plenty of stones to ponder – or plenty of inner effects to review - as from the distance, Bergamo, with a light mantle of fog around its hilltops, beckoned me forth. 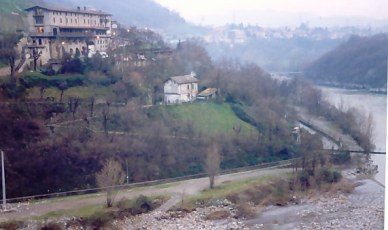 Clanezzo and the boats of our future

Looking along the winding river and pondering the bloody past of so many battles to which this crossing had been witness I remembered what Ann Sexton, the Pulitzer Prize winning poet, wrote about fog:

The future is a fog that is still hanging out over the sea,

a boat that floats home

We returned up the path to our meeting, the boats of our futures giving no indication of what direction they would take.

For me, they would not float 'home' in any traditional sense, for, like a tortoise, metaphorically speaking, I have carried my home on my back.

'Home' is where I am currently resident, and so I make the absolute best of all each location has to offer and just enjoy where the future takes me.