The charm of Paris 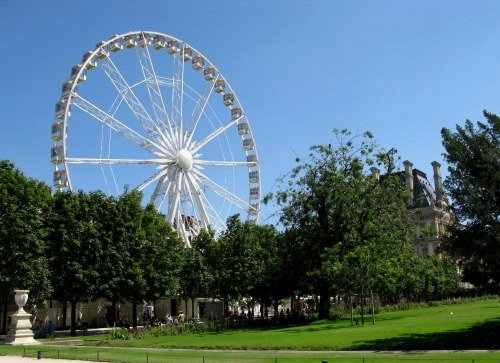 People asked me why I was going in winter.  I replied that it was still Paris – winter or not: just Paris without so many tourists - a perfect travel getaway.

My short break in Paris used to an annual OECD Conference – always in January. Since I was there for busines, I thought I would make the most of it.

Where most people are attracted to the January sales, my interest was different.

I wanted to dance in every tango bar in Paris - for this is the city where the dance was reborn in the 1920’s and rose to the world’s view.

Paris - where theatre is everywhere and that is its charm 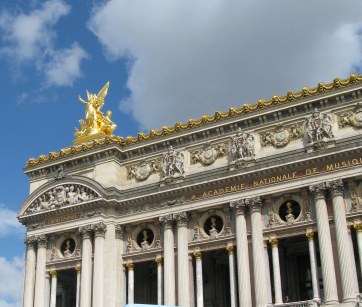 It was a worthy goal and though I think we missed a few - ah, how we danced: Argentinean tango and real Cuban salsa.

Most memorably, with a captivating student I met in a tango bar on Saturday night, who made me promise to come to a big salsa event on the following Tuesday. When he saw me there, he brought me to the dance floor and we danced as if connected, though we had only met once before.

So it can be with a Latin dance.

I shall never forget the meringue, a saucy Latin dance where one can play ‘cat and mouse’.

A man was eating dinner as he watched us on the dance floor– and paused for fully five minutes with his food-laden fork half way to his mouth. It was theatre at its best.

Sadly I had to fly out the following morning so my passion was restricted to the dance floor – but I have a burning memory of a wonderful, exhilarating night of dance.

One should build as many memories like this as one can in a lifetime – and despite losing contact details, who knows when paths might cross again – or where?

The true traveller is he who goes on foot,

and even then, he sits down a lot of the time 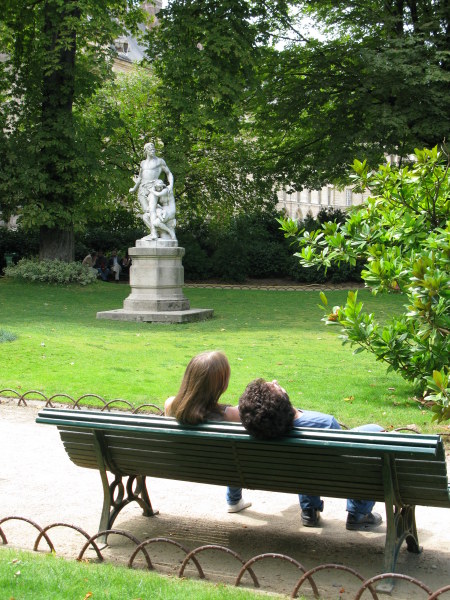 In Paris there are lots of places to pause, to watch the passing parade, or just to absorb the reality that you are here, in Paris - the stuff of romance. 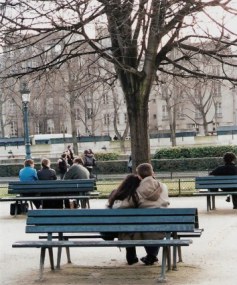 When we arrived on the Roissy Bus from Charles de Gaulle Airport, we stopped at a traffic light and from our high coach window saw a romantic scene that spoke of the city’s reputation.

A man knelt before his love alongside a flower kiosk adjoining a Tabac - and presented her with an engagement ring - right there beside our bus, on the street corner.

It was as if we had stolen onto a movie set where the best of our expectations would be satisfied.

So much of the charm of Paris comes from its style of design - whether quirky or stately. 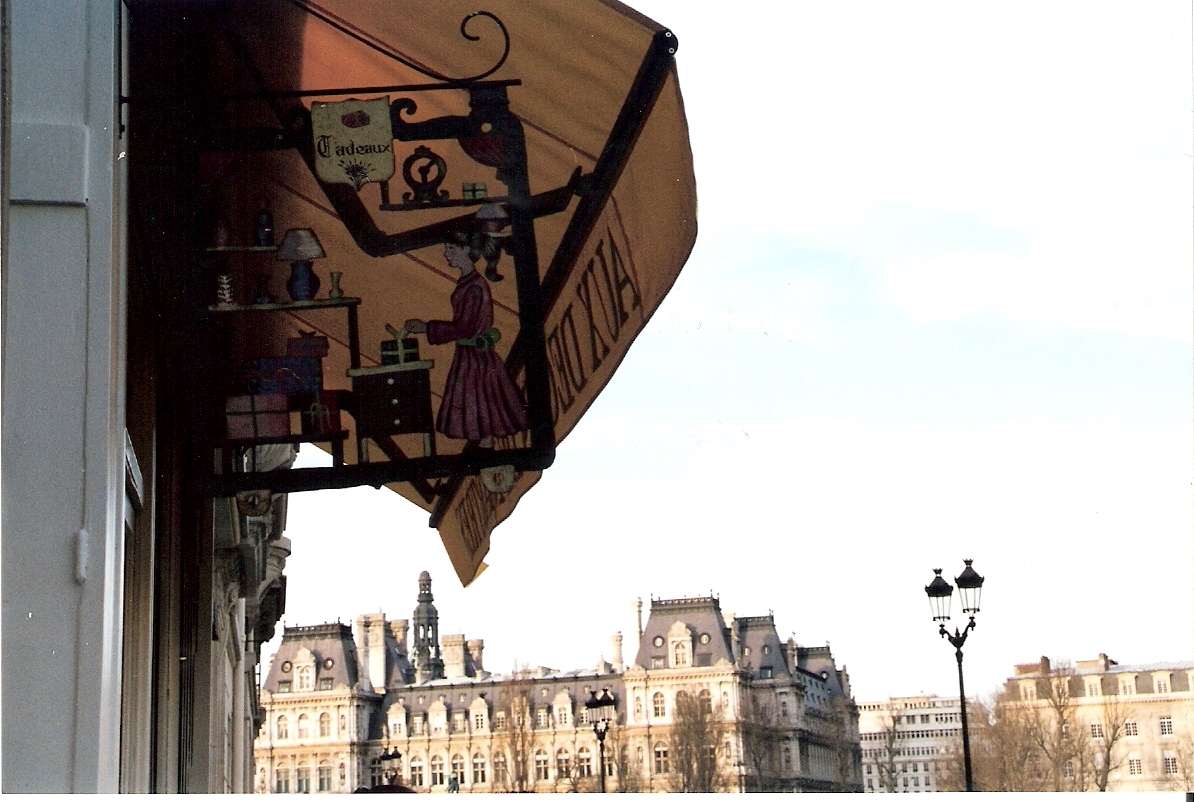 I have a great liking of beautiful entrances and doors and have quite a repertoire of photos of them in many cities...and those in Paris never ceasue to charm. 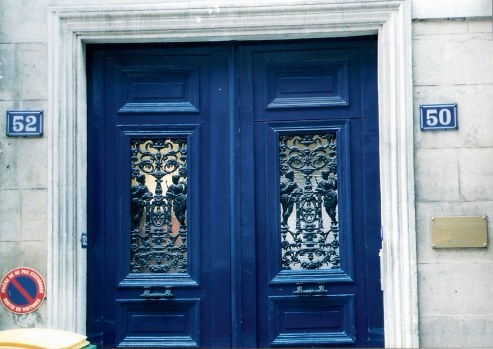 Wthere it is the juxtaposition of colour and design or as in the case to the entrance to Number 20: elelgance of door and scupltured entrance, together. 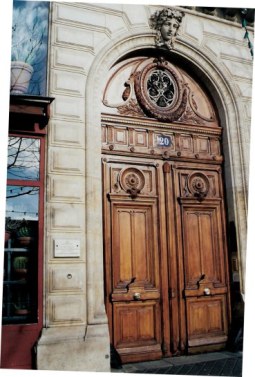 Some entrances that seem to ask no further embellishment, nonetheless receive it from obliging neighbours with their own displays adding still more uniquely Paris detail. 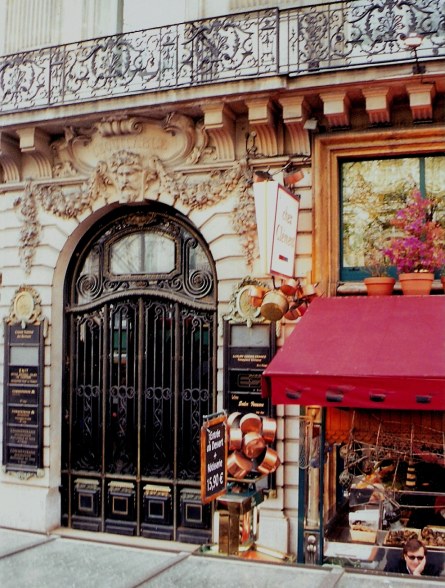 Paris - a city of dance

Paris is a city of dance…as posters seemed to reflect. 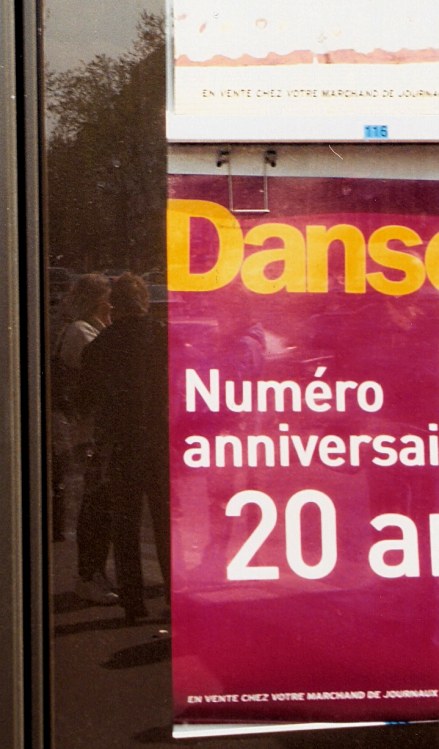 Usually I am a single traveller, but this time I came with one of my first two teachers of Agentine Tango. They inspired me with the passion of this wonderful dance. I hoped to find some of that passion of their Tango Bar in Australia, here in Paris on this trip. 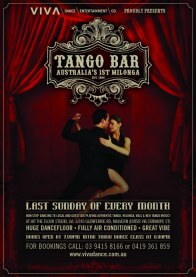 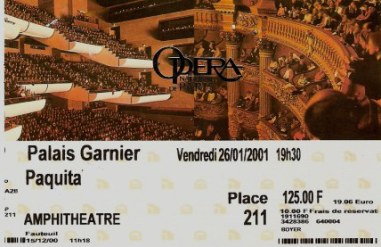 Though a dancer, Kristina had never been to the ballet, so, in planning the trip to Paris, I checked the Opera Garnier programme.

Fate would have it that the perfect ballet was being performed when we would be there:

We had to go, for it is not often one attends a Ballet with the same name as yours.

It seemed a good omen – and I believe in omens!

I was not disappointed. It was ballet at perfection, costumes worthy of any of the best Parisian design, and an atmosphere to match the gilded beauty of the building itself – even if the only seats that were left were ‘In the Gods’ (in the very last row at the top of the theatre).

All the old icons greet like old friends, for even if you have never been to Paris before, something like the Arc de Triomphe is so familiar that you are sure you have seen it in real life before. 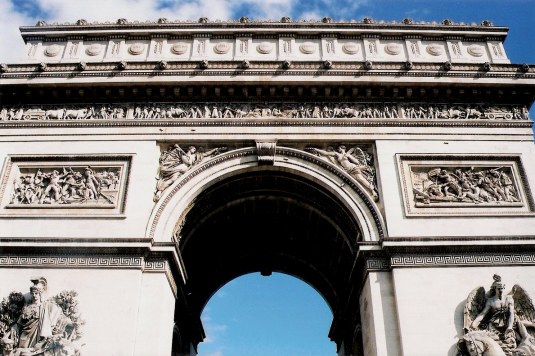 It looms above what used to be officially named Place de l'Étoile- or  of the Star - named for the star-like convergence of roads at this point.

It has now been renamed Place Charles de Gaulle – though still referred to by locals as 'The Star'.

years later, when working in Paris I found negotiating The Star as a driver quite daunting - but then remembrered to drive like a Parisien with eyes focused upon your goal and never waivering to proceed.

There is a lot of patriotic bas relief on the Arc de Triomphe but I wonder what other nation would show their proud youth nude as they go to battle against forces fully clad in battle attire of chainmail?

It is not to study these marvelous nude figures that people come here in their millions, but it is a bonus.

The tomb of the Unknown Warrior lies beneath the arch and even Hitler followed the respect shown by all parades on the route on which the Arc de Triomphe stands by having troops march around and not through the arch itself.

I always think the visitors on the top look as if they are part of the bas relief. 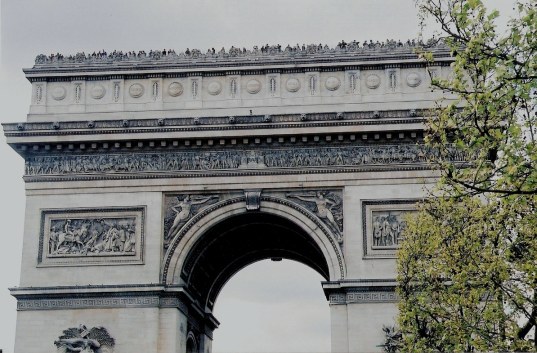 Hopefully none of them will break off – as reputedly did the sword in the hand of the figure of Republic - at the start of the Battle of Verdun in the second World War.

Fearing that this could be interpreted as an omen against the success of the battle, the damage was quickly covered with canvas.

I can’t resist a hot chestnut on a cold day...and I think it is part of the charm of Paris that there are so many chestnut vendors to warm you and to and munch as you wander.

It is always somehow something particular to Paris to buy a small cone full of hot chestnut, waiting patiently behind others with the same idea. 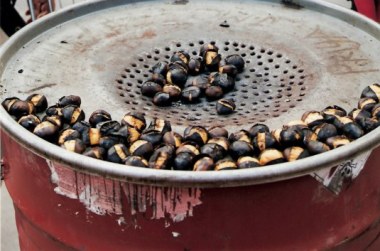 Beside the elegance and opulance of Galeries Lafayette, here was a vivid contrast in style: a dog and cat snuggled up in miniature bed were successfully charming money from the pockets of those passing by. 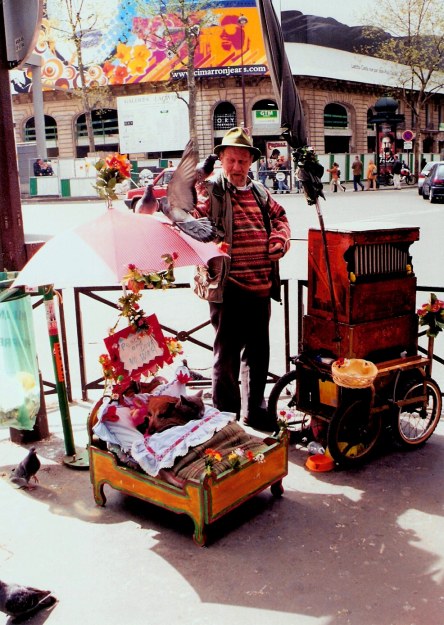 I find so many fascinating things to see, but had I been the driver of this illegally parked car, perhaps some of the charm may have fast worn off. 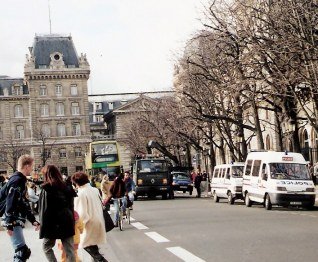 No messing about here.

The truck comes and just picks up your car and carries it away.

This was all accomplished with incredible speed and in five minutes the offending vehicle had been uplifted, secured and disappeared to be impounded.

There are so many stories unfolding as you wander – and one never has to walk far to find something unexpected, like a Japanese garden in the centre of Paris. 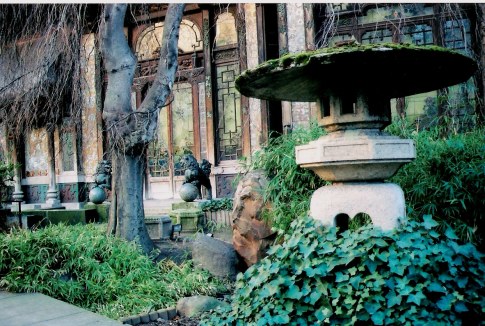 It was not open at the time which was a pity.

UNESCO donated the garden and I was would have liked to see the rocks that had been specially selected by an artist, Noguchi, in what is reputedly a garden metaphor representing the world.

I pondered what was so relevant about rocks, and then recalled something that astronaut Neil Armstrong once said:

Geologists have a saying:

So perhaps their careful selection had more meaning than their artistic shape.

I shall have to explore the theory further when I can explore the Japanese Garden on another visit.

Everything needs finance - and the way that this has been handled in Paris is with its usual style at the Palais Brongniart, or Palais de la Bourse

In strolling along with my chestnuts, I saw something that reminded me that Paris has always been a city of innovative finance.

The Bourse - the Paris Stock Exchange - was the second in existence in the world after that of Amsterdam (although early records of what effectively operated in the same fashion as a Stock Exchange took place in Jonathon’s Coffee House in London in the mid 1600s). 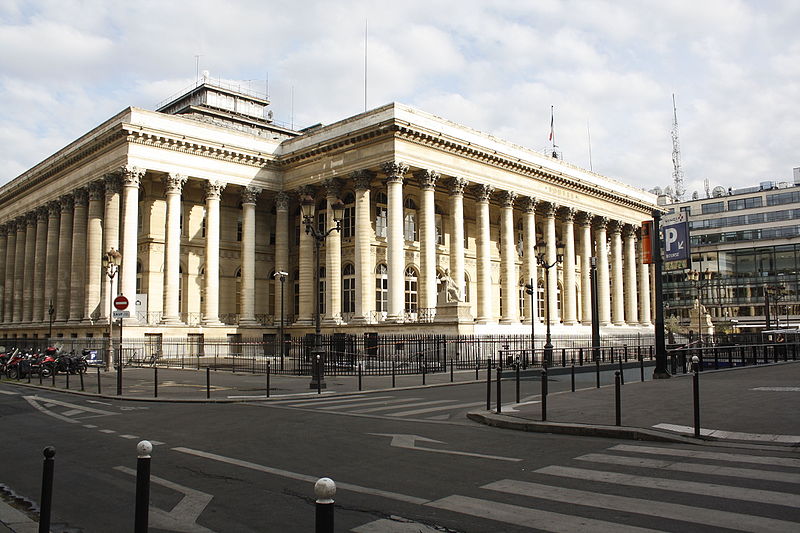 Ah! The volatility of the markets and how fortunes have been made and lost.

As I crunched on my chestnuts I chuckled to myself at the old adage on the subject:

longer than you can remain solvent.

The charm of the art of wandering in Paris

Besides the delight of  people-watching, or just admiring the elaborate facades of the buildings... 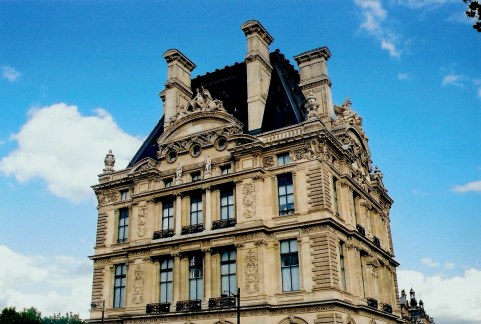 ...the charm of wandering the streets of Paris brings you to sights such as another familiar landmark: The July Column in Bastille Square.

…or the golden statues of the Pont Alexander III - the four ‘Fames’ – those of Science, Industry, Commerce and the Arts.

One of the Fames is restraining the winged horse Pegasus - who himself was a god of fame and wisdom –  and of inspiration - for in myth, wherever the hooves of Pegasus struck earth, an inspiring spring was said to develop.

With Pegasus kept here in restraint, but in glory, it could be said that he is helping us to drink in the inspiration of Paris – an inspiration that continues to draw creative talent from around the world. 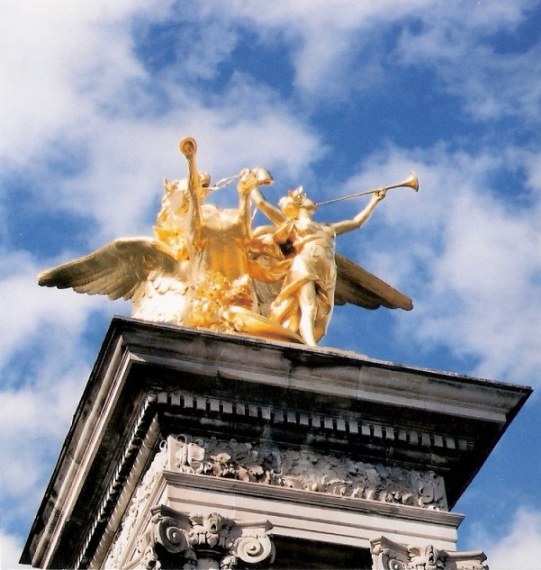 Fame is having a busy time holding the earth-bound creature, but I am always glad she manages to keep him here on the bridge over the Seine.

The name 'Pegasus' always makes me smile, because when my big brother was small, for some reason he thought stepladders were called 'Pegasus' – and it led to considerable consternation until the mismatch in terminology was discovered.

No-one ever did discover how such a confusion of what to an adult are unrelated objects could seem closely alighned in the mind of a six-year old child. 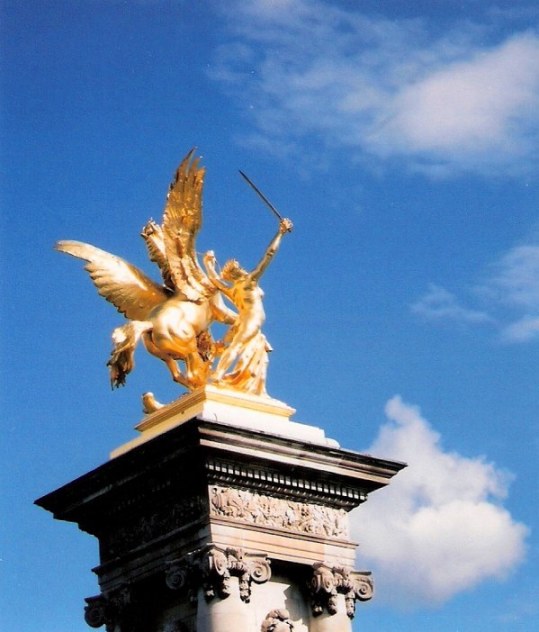 When Paris sheds her daytime colours and wraps herself for the night, she imprints sights that stay in your memory to delight forever

Part of the charm of wandering in Paris is that the city presents you with layers of iconic images. 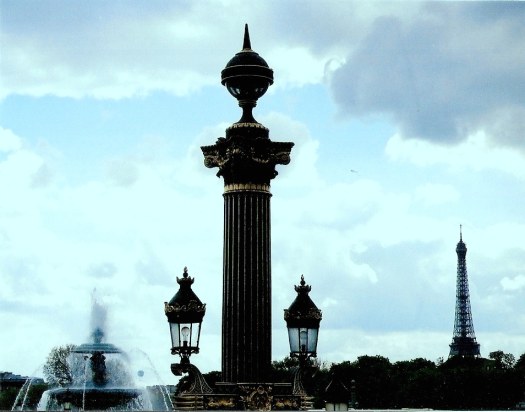 On the Seine, it was getting to be time for the booksellers to pack up. 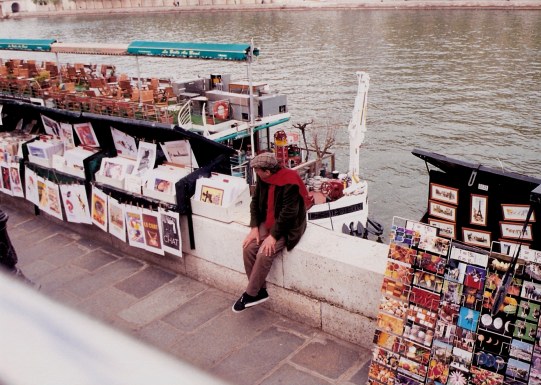 In the transition from day to night, in Paris it was like a gracious stage exit. The great city as protagonist for daytime theatre swept away with a delicate stole of crimson and gold around her shoulders. In concert,  Paris landmarks imprinted their silhouettes against the fading colours of day. 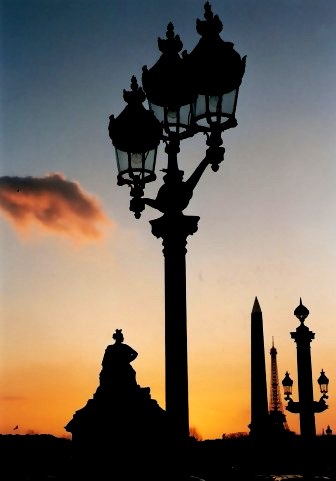 At dusk, the icons of Paris line up for you as dark silhouettes on the banks of the Seine by the Pont Alexander III.

Here, I love the fact the lion seems to be roaring a puff of steam into the cold night air as the one lonely cloud of the pastel blue twilight drifted into position behind him.

At this hour - or in fact at any hour - this is always one of the interesting places of Paris - for here you can capture images of  le Grand Roue (the Big Wheel), the bridge lion above a golden METRO sign, l'Obélisque and Eiffel Tower.

As the Pont Alexander III 18th century lights are lit: you can have these Paris icons all in a row, and beautifully framed.

This is my secret place to align blurred outlines of the monuments of Paris as they stand out against the sunset. 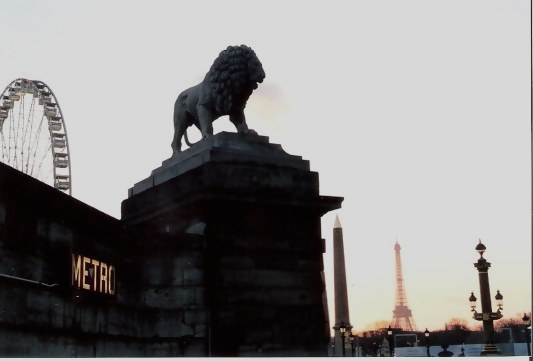 Paris is not a city.

It is an experience, an affair, a lifting of the spirits as you share her secrets and build your memories.

Audrey Hepburn was also captivated by the charm of Paris - and as she said:

Paris is always a good idea