Blessed are the curious for they shall have adventures

Not all adventures are of the block buster type. Some are adventures in small things: in seeing how people live their lives in places quite different from where you usually live yours.

So it is when you visit Sancti Spíritus. It is not a big tourist destination – or even a small one for that matter. But it is a good place for those who seek the adventure in small things and savour the delights offered to the flâneur, as the French call those of us who like to just stroll about with no particular intention but to wander and to observe.

The pedestrian center of Sancti Spíritus encourages this. 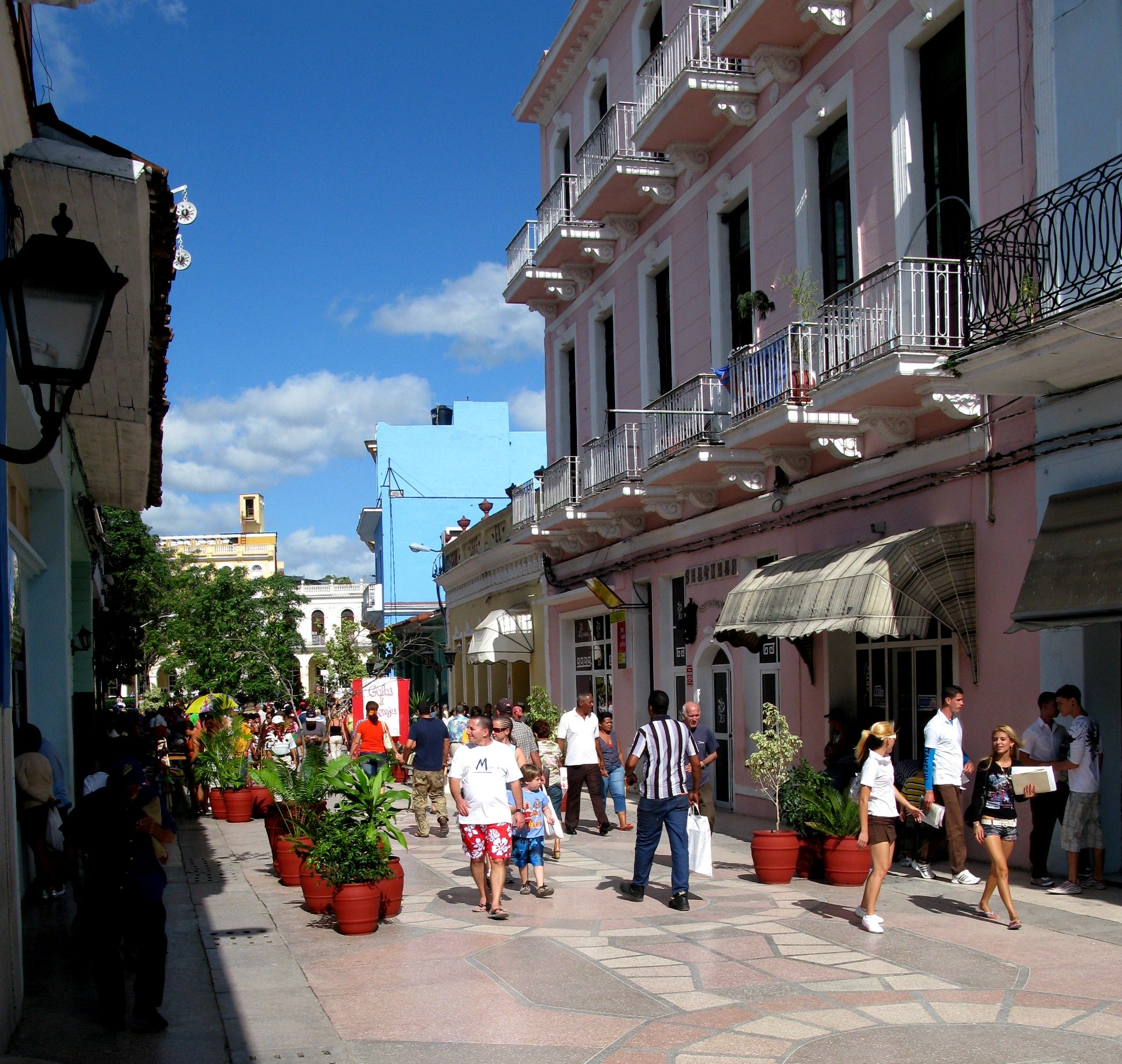 So does the relaxed seating of Honoratio Park in the centre of the city. 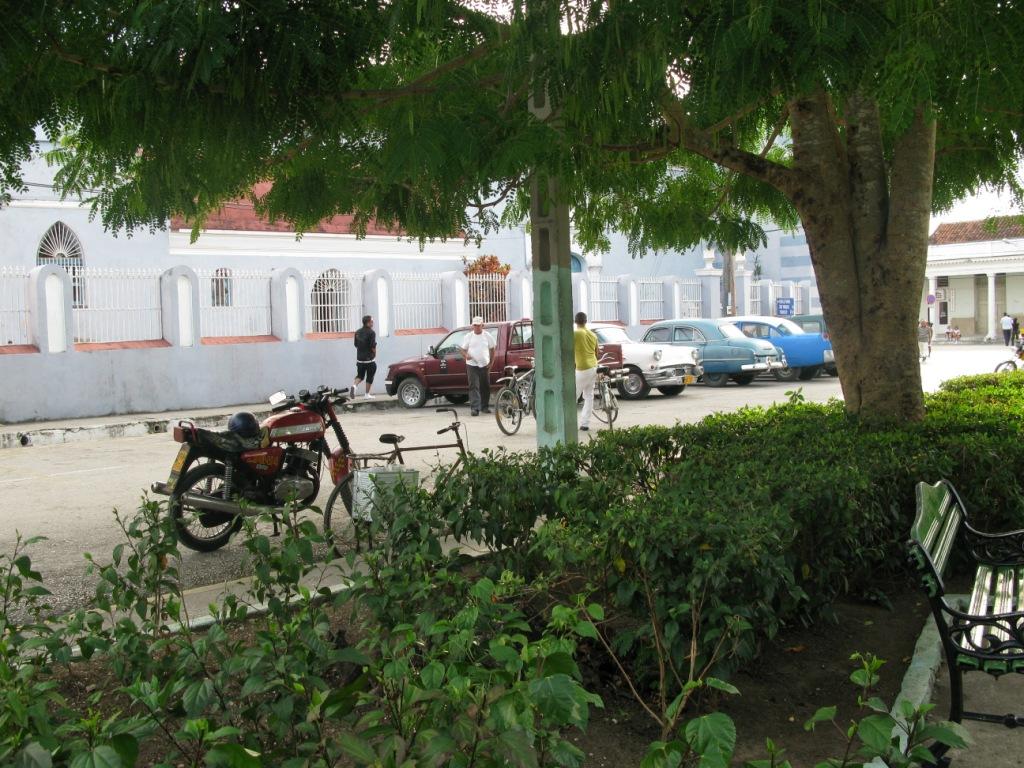 I have read that people who grew up in Sancti Spíritus and moved later to Havana, cannot help but compare the lifestyles:

This relaxed way of life may have fewer opportunities than those offered by a robust tourism city, but people here are friendly and reportedly more relaxed.

Certainly, many of its sons returned to Sancti Spíritus to give long service to its people.

One of these was Dr. Rudesindo García Rijo, who had first graduated in medicine in Paris later studied in Madrid before returning to his home town.

Dr.García Rijo's father was also a doctor of some standing and following Rudesindo's graduation, he returned to Cuba to set up advanced facilities reputed to be better than those of colleagues in Havana. He wrote many research papers on thyroid conditions and was a forefront researcher in endocrinology. Dr.García Rijo wrote some of the first research papers on the island on the cause and treatment of diabetes . His published papers brought him great respect, not just in Cuba, but throughout Europe and North America as well.

Although having a  wealthy clientiele, Dr.García Rijo was philanthropic in a practical way, reserving one day a week to treat those too poor to pay, often also providing them with free medication. He also considered himself not too important to make house calls for his patients, even those quite distant.

Sadly, in 1912 Dr. Rijo was shot to death on his farm, apparently by marauding bandits.  It seems however, that he is destined to a long relationship with the city of his birth: he remains in statue form here in the centre of the city to which he dedicated his life. His grand home is now a gracious hotel.

In this photograph you can see Dr. García Rijo here, in Honorato Park in the city centre, standing behind this el classico taxi. 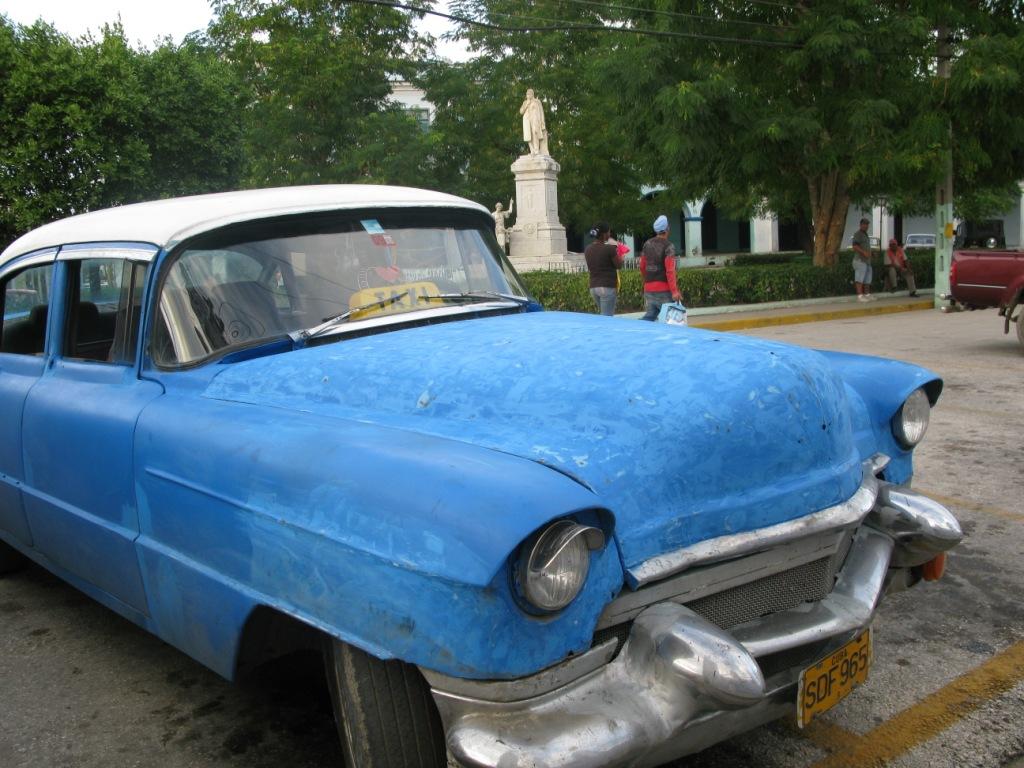 I was interested that it was not just non-Cuban visitors to the city who were drawn to Dr.García Rijo's statue. 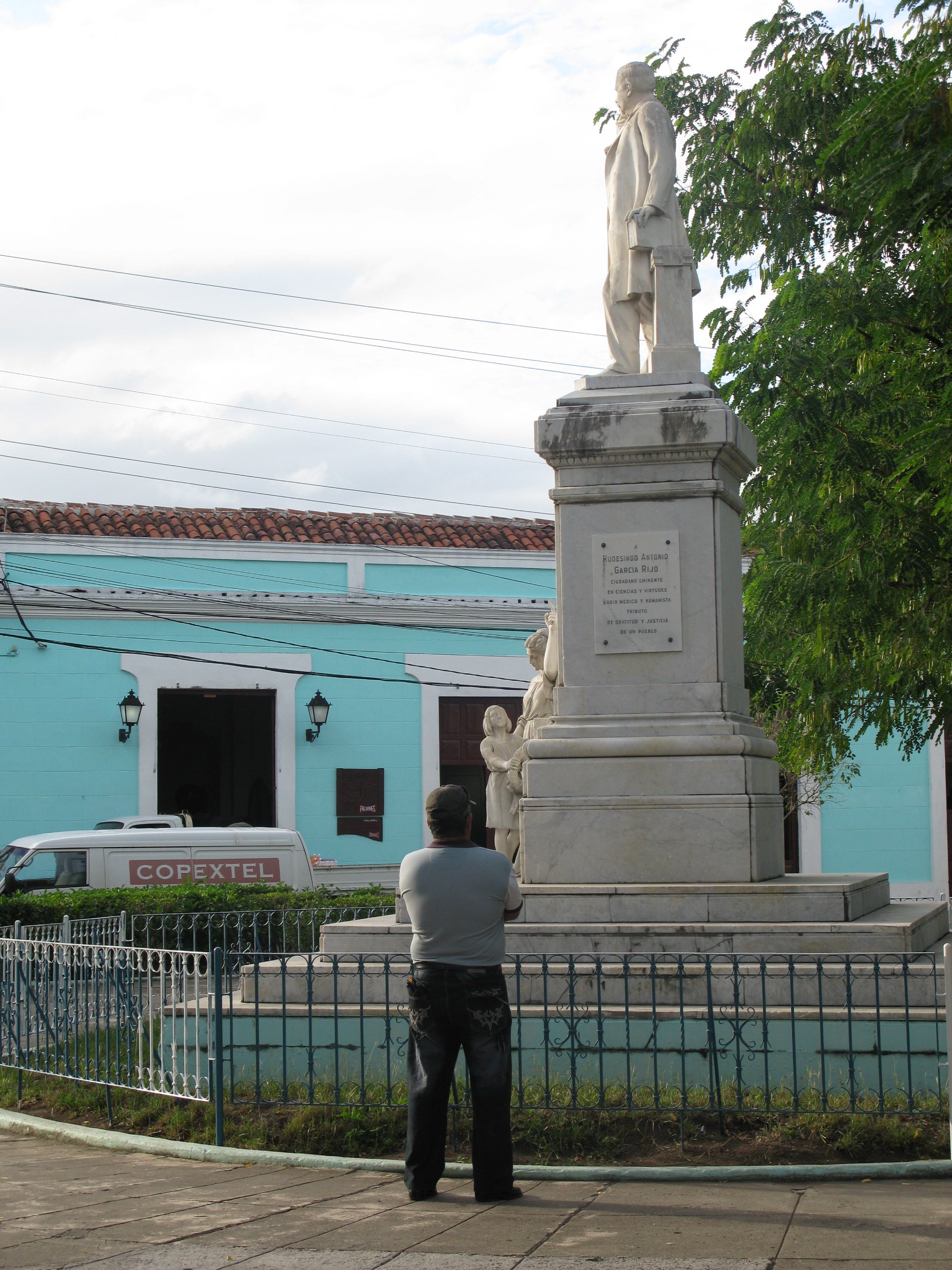 Another of the sons of Sancti Spíritus, was the priest Monseñor Pablo T Noya Minguez.

Coming from a family wealthy enough to have donated the bell for the Parrochial Mayor, the Monseñor was a supporter of the revolutionary cause. He and fellow priests used to gather to play dominoes with the locals and in this way they gleaned a great deal of helpful information, later passed on to the revolutionaries.

Despite being offered a luctraive and influential position in the church in Havana, Monseñor Minguez preferred to remain and administer to his Sancti Spíritus flock - or perhaps he was in too vital a position as link for revolutionary information.

Whatever the cause, he seems destined not to depart Sancti Spíritus: his bust stands yet by the church from where he served for over 60 years. 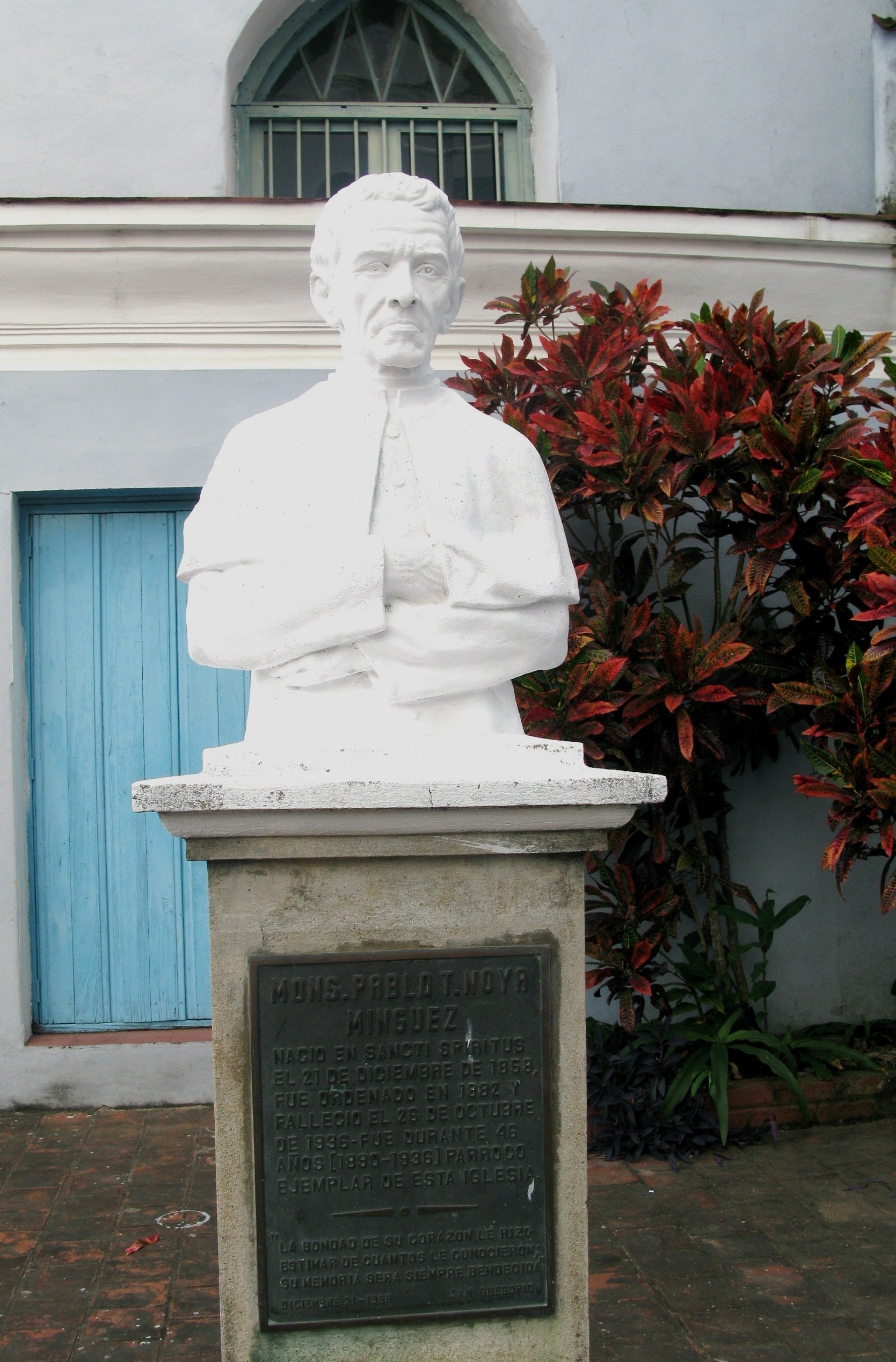 Alongside the Parrochial Mayor church there stands a statue of another Sancti Spíritus priest who is with a child - and both he and the child seem to be a magnet to the children of today. 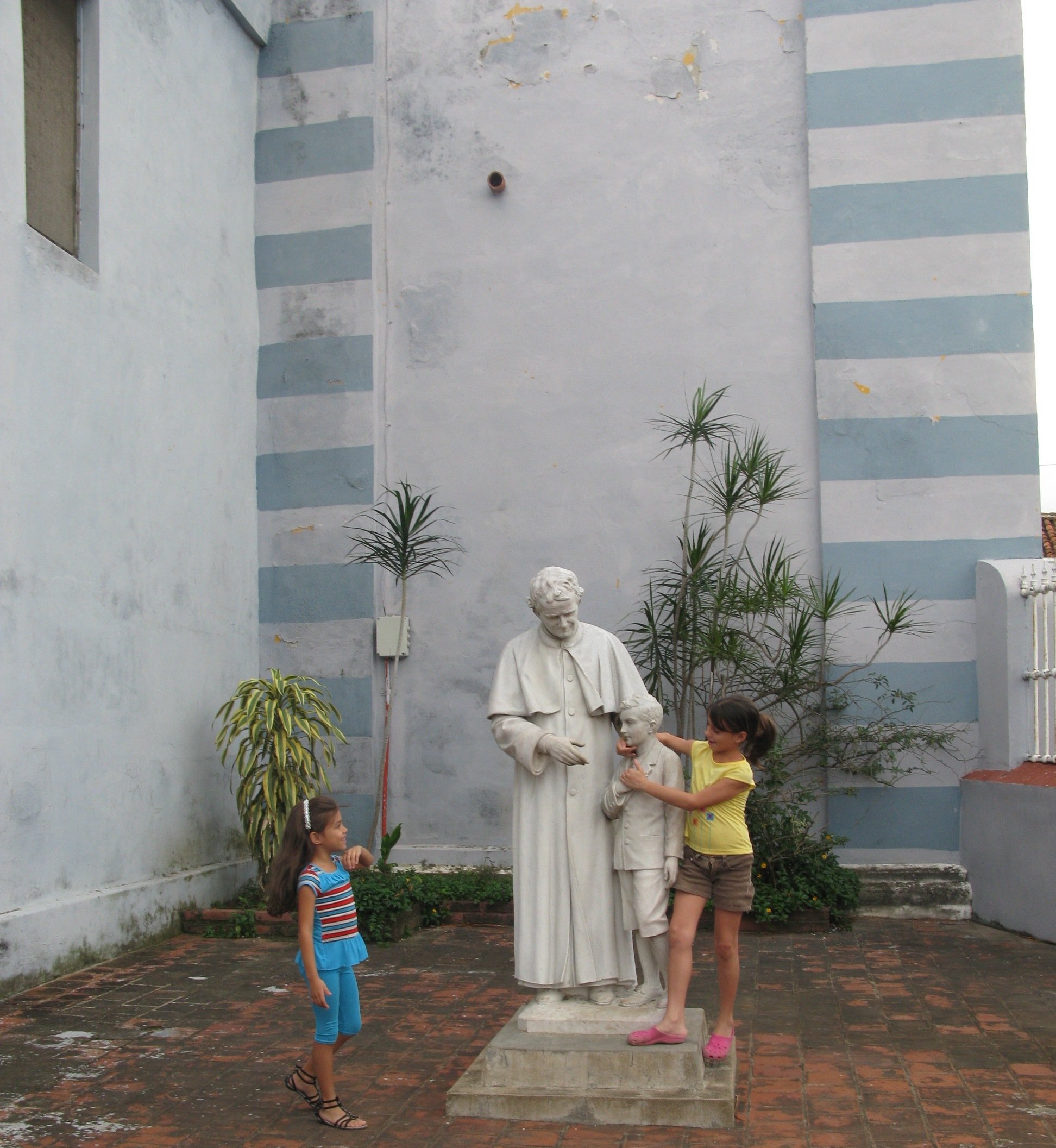 We arrived in Sancti Spíritus just before a celebration of revolution, and a giant Cuban flag was being attached to a building.

When we first arrived the street looked like this. 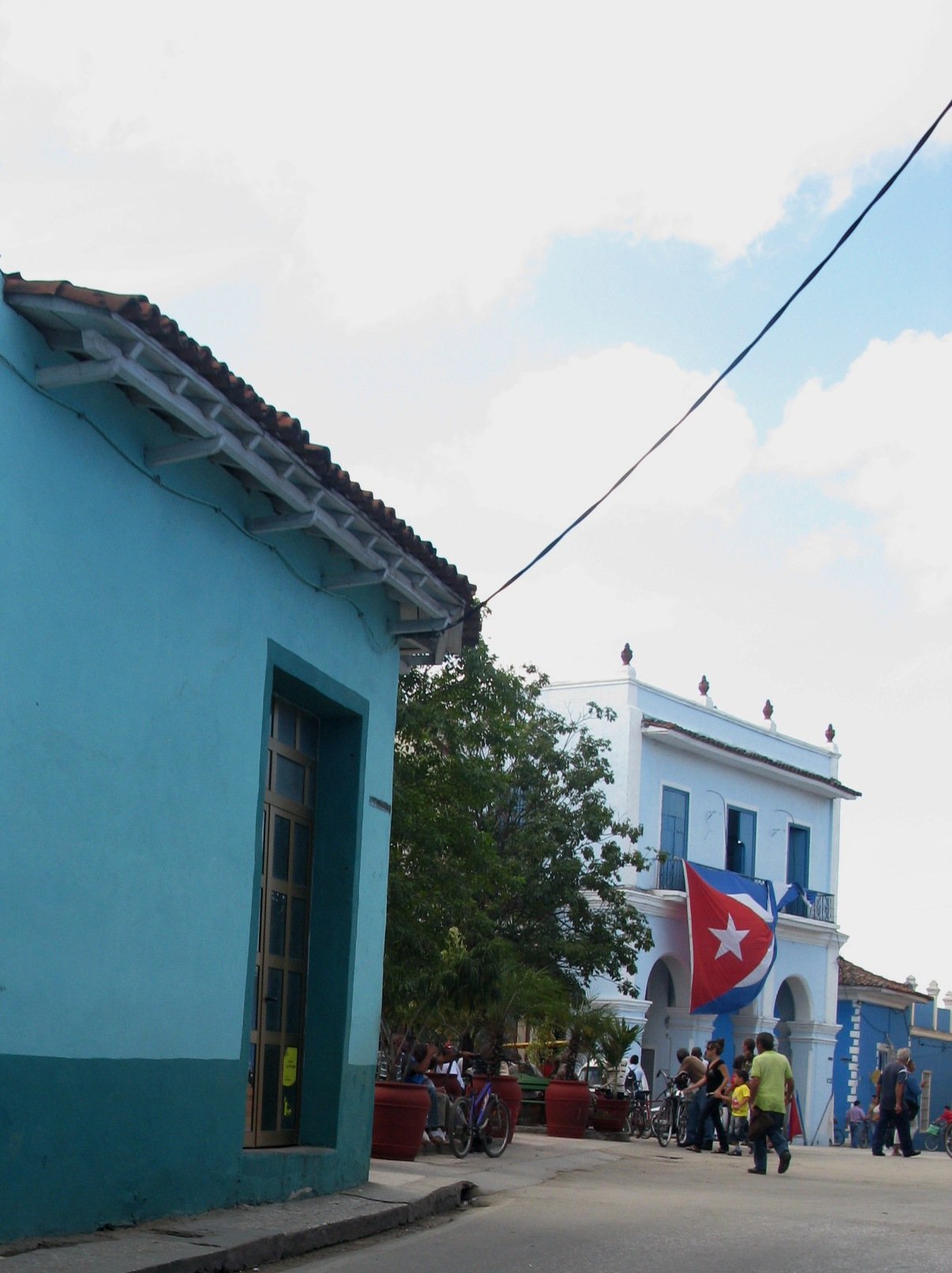 By the time we had returned from travel to the Islands of the Queen,  the coral reefs off the coast, it instead looked like this. 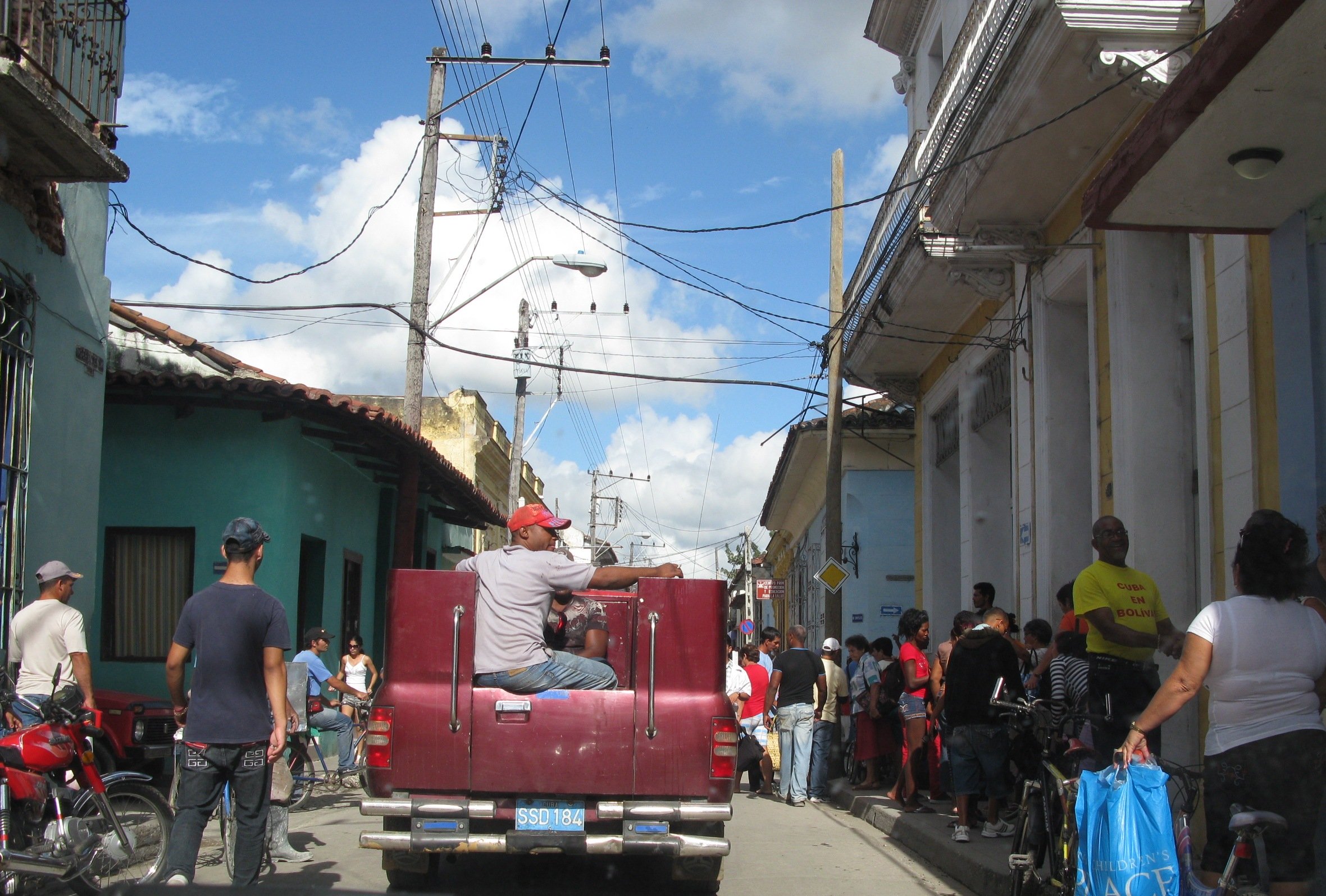 Crowds were arriving for the huge, politically inspired music performance that night.

Watching the setup, I thought that the amplifiers alone would have done a pop concert in London's Wembly Stadium proud.

When night fell, I actually found it rather a daunting event. Too much revolutionary promotional videos as background with graphic images of dying people in battle and strident speeches in between what was, to me, average playing by the official musicians.

Music from the heart and soul in Sancti Spíritus

By contrast, I had during the day experienced real magic in a musical rehearsal in the Parrochial Mayor church, just off the pedestrian street Indepencia. 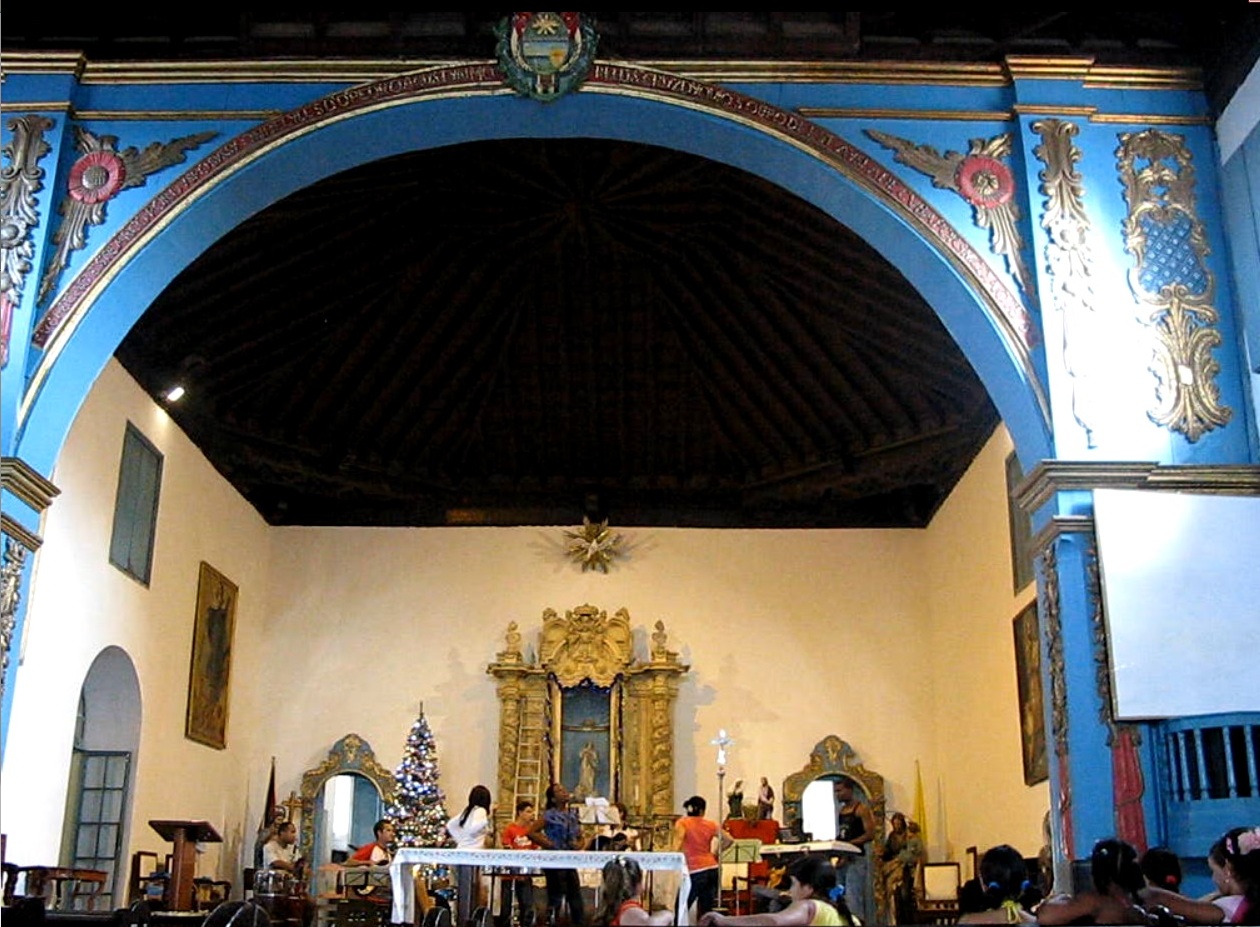 To me, there was no comparison. I guess it was because joy and enthusiasm cannot be engineered.

I thought of Bruce Springsteen saying:

A good song takes on more meaning as the years pass on.

Why? Because there is an element of passion within it that ignites differently in each of us as we listen.

A politically engineered song has lost its soul.

Turning away from the official band on the night of the political performance, I was suddenly greeted by the lead guitarist of the church rehearsal that afternoon. He had seen me taking photos in the church and came to chat with me and tell me about his musical group and his hopes for the future. Sadly, they didn’t include Cuba, where he felt he had no opportunity.

I have since heard from him and he is well on his way to realising those dreams. 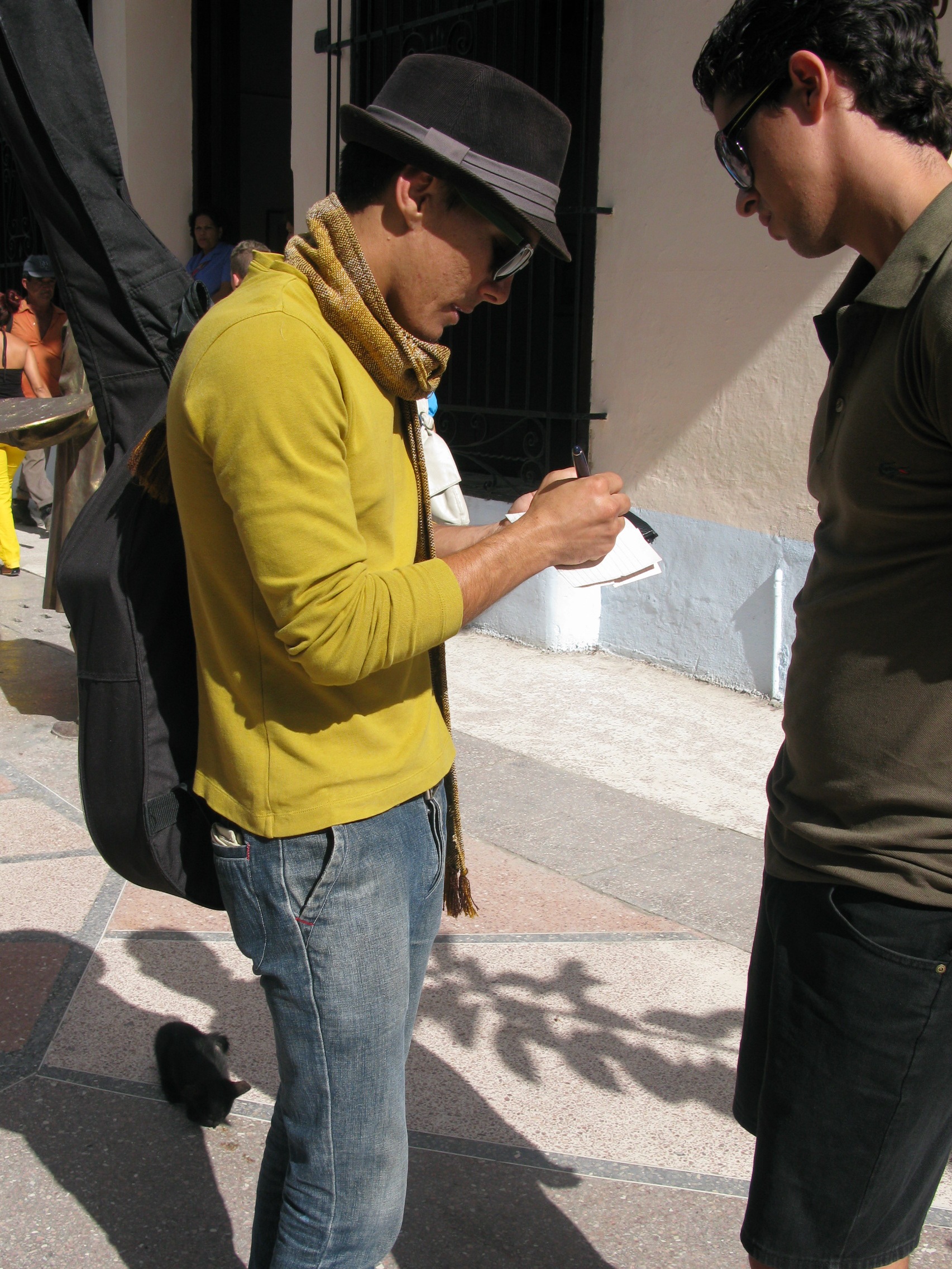 As I strolled through the streets, I noted another musician being booked for a gig as he strolled along the boulevard with his guitar over shoulder.

I felt confident that the performance would have more soul than that which was so carefully orchestrated to promote a state approved message.

When grandeur falls to disrepair

We were in Sancti Spíritus to visit the city that was the home of a cousin of my tour director on my one month with no plan trip to Cuba. I write about it in my book about the trip The Cuban Approach.

The cousin's home was right on the main square and was once very grand. Sadly, it now revealed the effects of changed times.

The family themselves couldn't have been more welcoming.

As we entered, the exquisite rose marble floors spoke of better times. 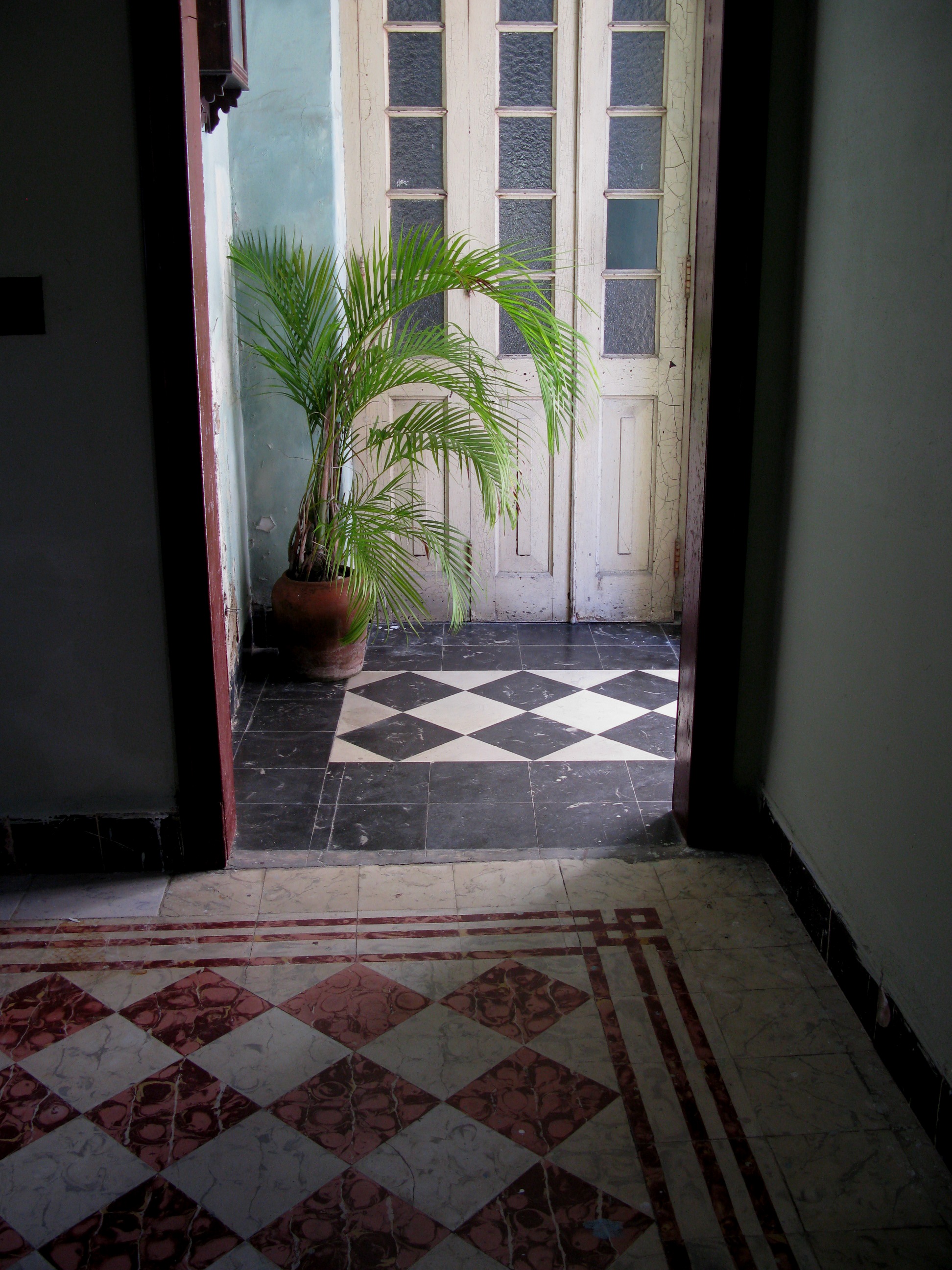 Within, there are Limoges statues and elaborate light fixtures. 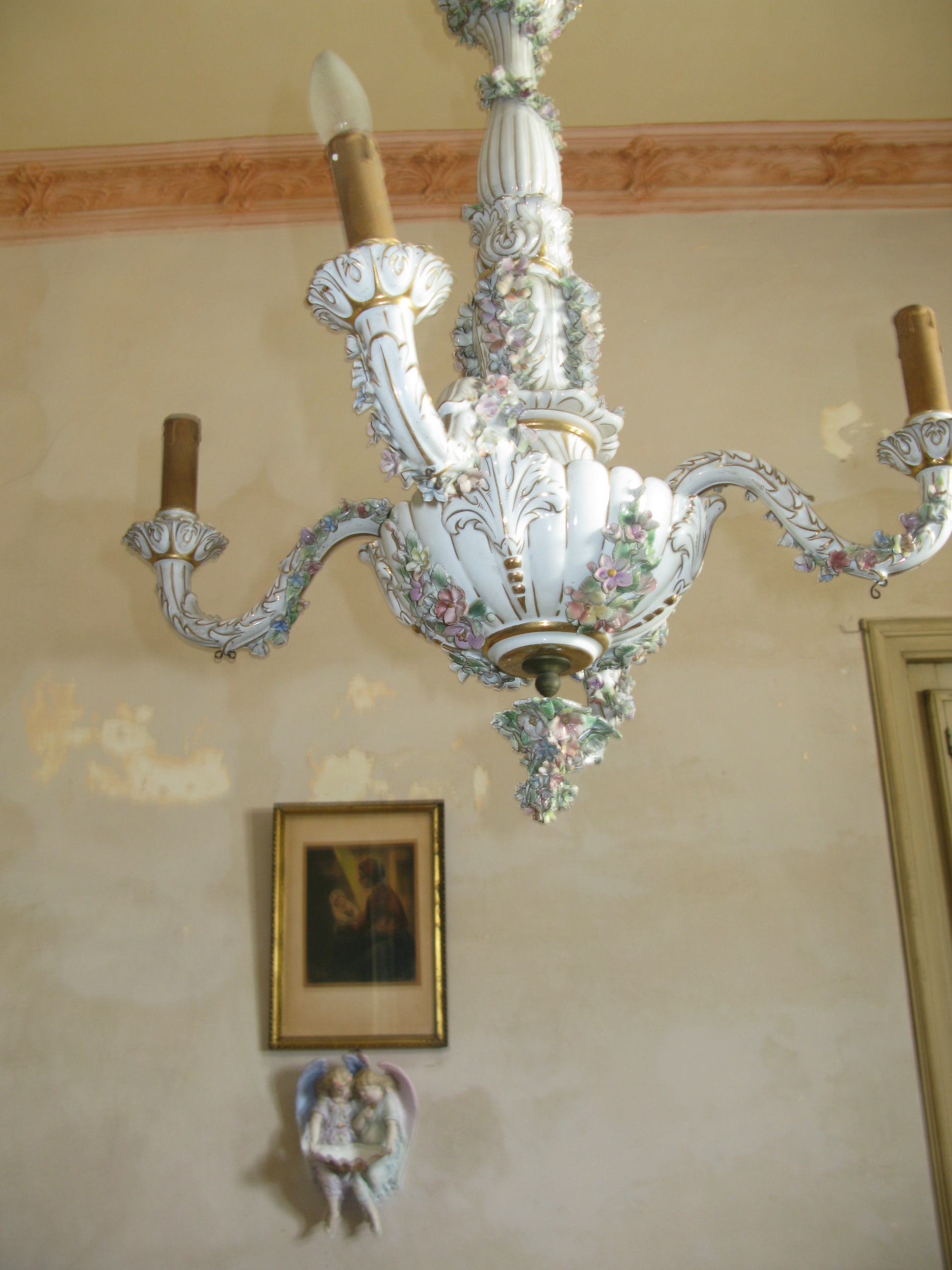 There were beautiful chandeliers that looked to be Lalique... 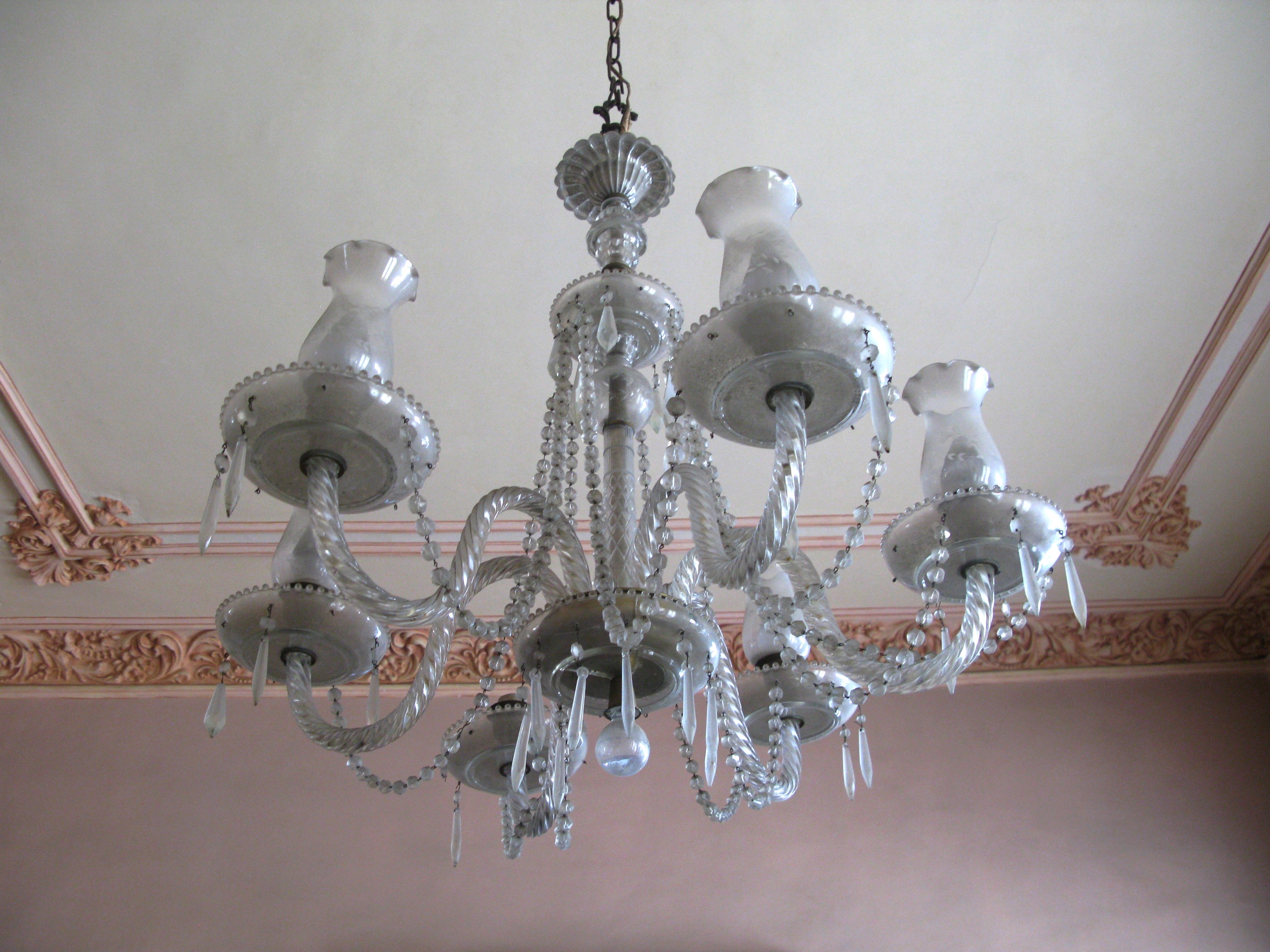 ... and a pair of Limoges table lamps echoing a much grander period of dress and manners.

The family art collection includes Cuban art, and obviously they had an eye for the up and coming artists.

This wonderful ceramic tile work of Maximilion Gonzalez de Olazabal was obviously purchased before the financial demise brought about by revolution. 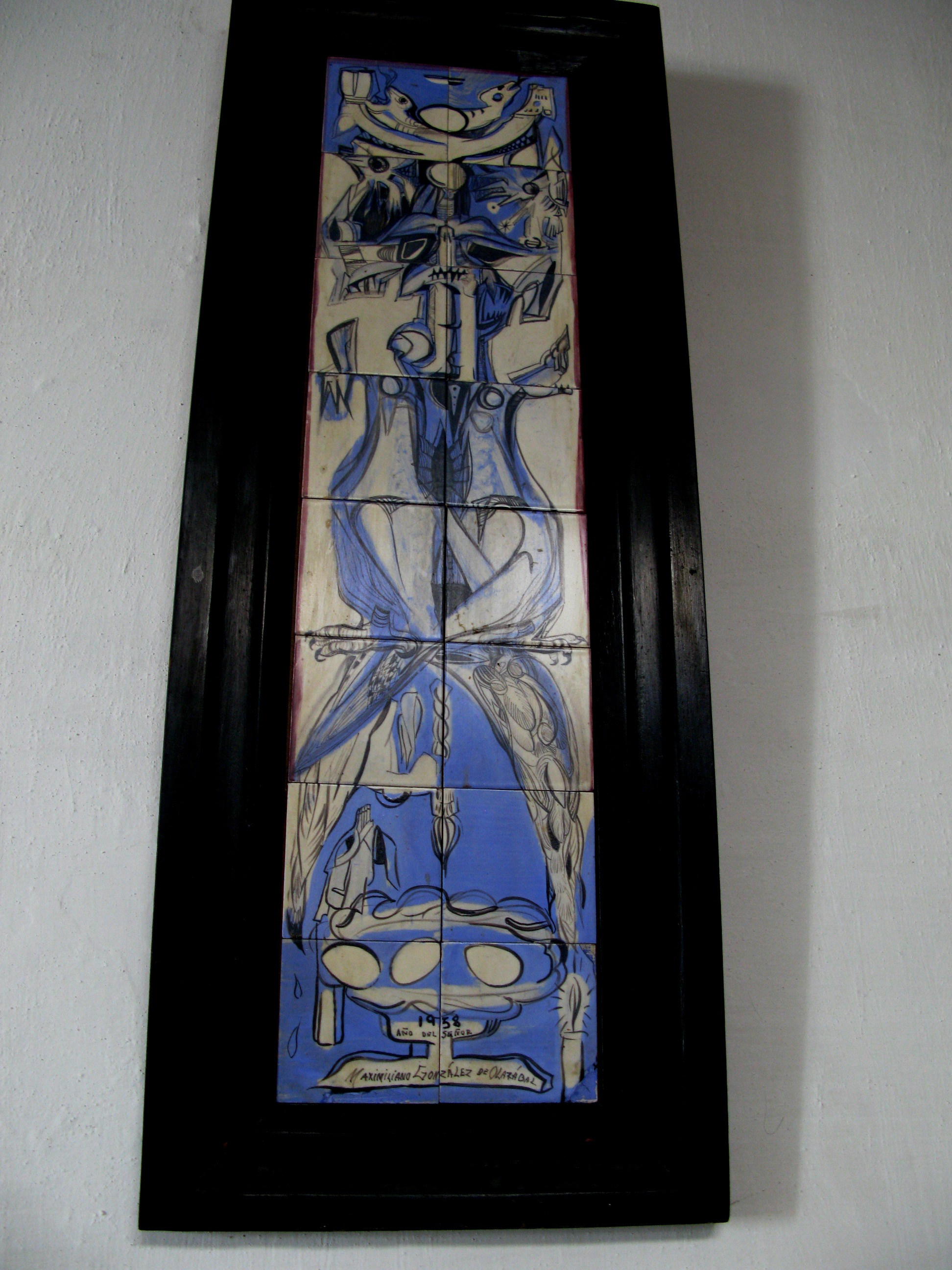 The rooftop terrace must have been a very grand place in its day.

Here, there must have been a step down at one time. 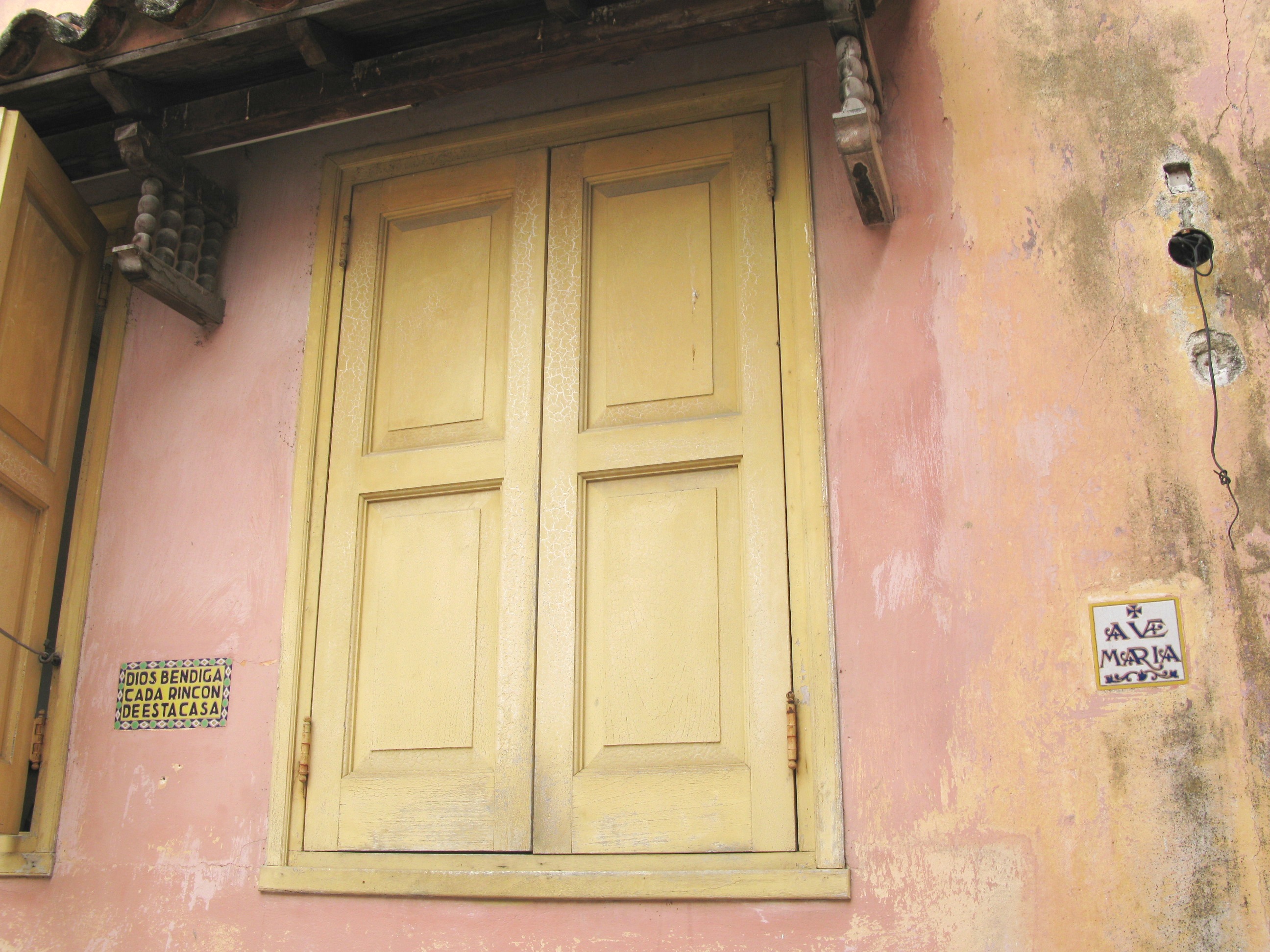 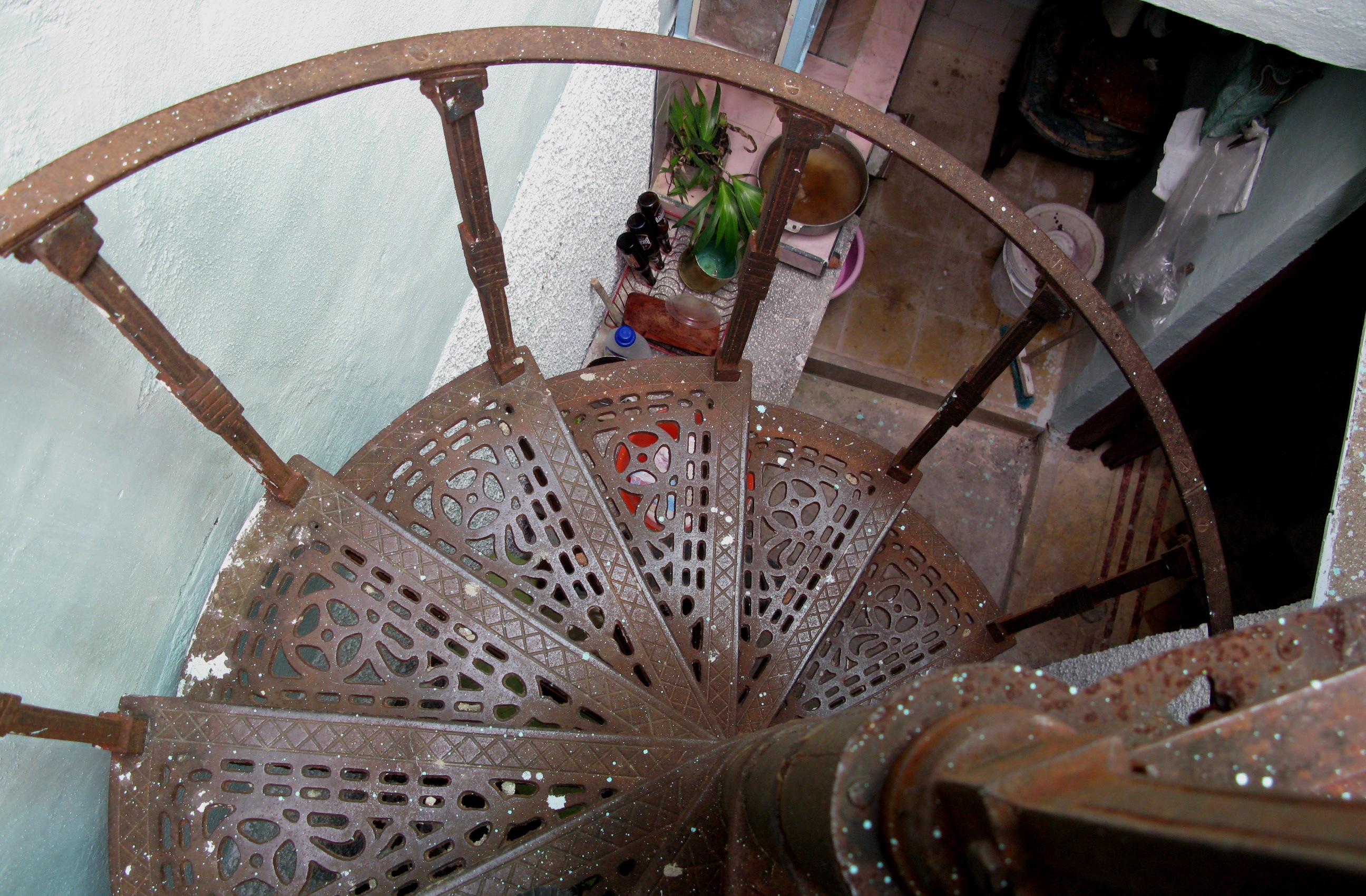 We approached by the 'tradesemen's entrance' on these lovely metal circular stairs.

This rooftop terrace must still be a wonderful place to sit on a hot summer's evening, looking over the beautiful architecture of Sancti Spíritus. 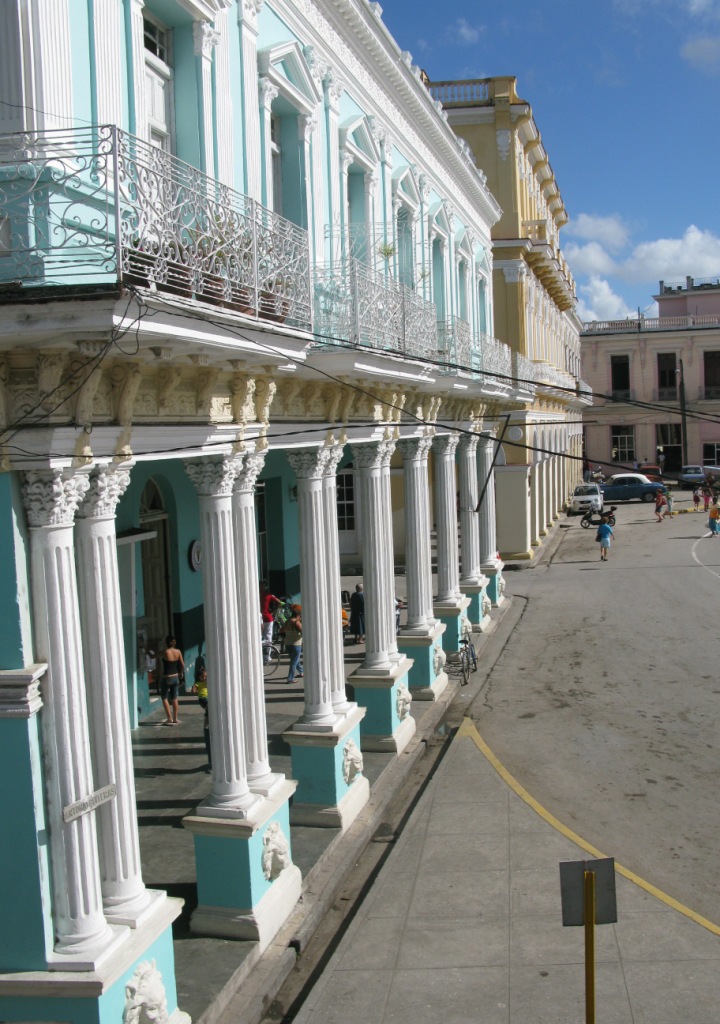 From here you could gaze in the other direction out over the rooftops of Sancti Spíritus, to the mountain range beyond. 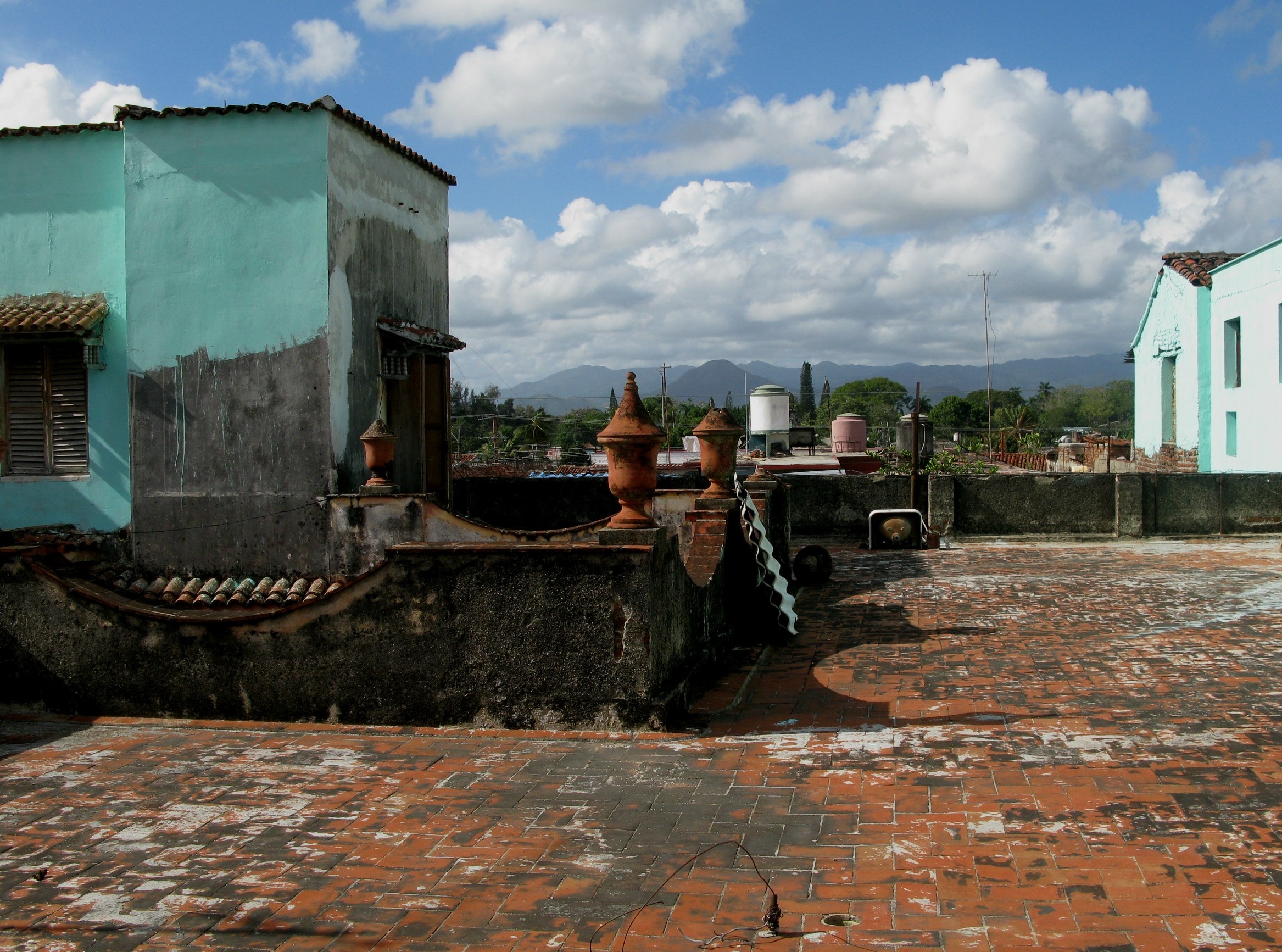 The risk of electrocution to me seemed ever imminent in Cuba, and certainly this thought resurfaced here on the terrace.

It seemed fateful to have instructions right beside the electrical cords to remind householders of this house that it is most ungrateful of them to partake of the mass without the correct response to the Ave Maria as being "She without sin". 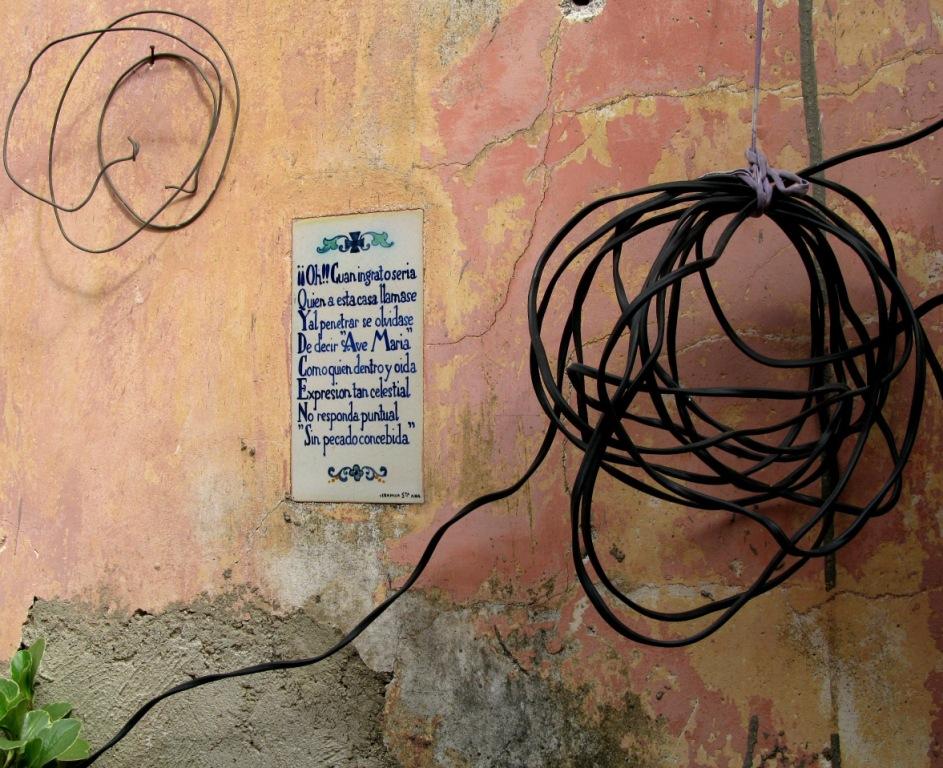 Inside was a bookcase, or two, of  beautiful leather bound books. 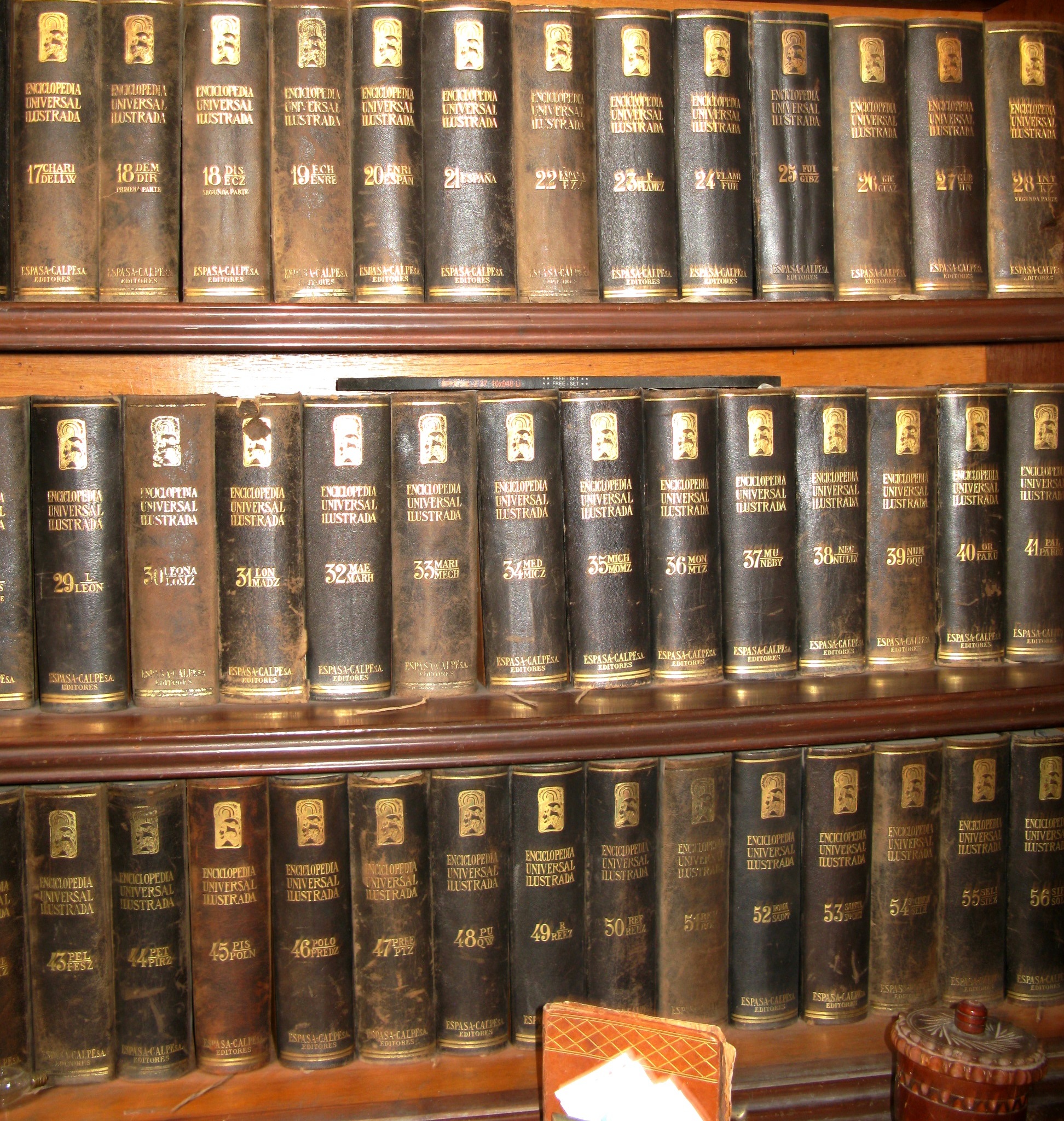 The 'book hound' in me drew me to them. The range or topics was wide. It naturally included medical books, for the ancestor was a well-reputed doctor teaching at the local University Medical School, but there were also books on animal husbandry and some classics.

I worried about their health in casual storage and wondered why they hadn’t been donated to the rather spectacular local Ruben Martinez Villena Provincial Library that, with its architectural embellishments, sat grandly in the city centre. 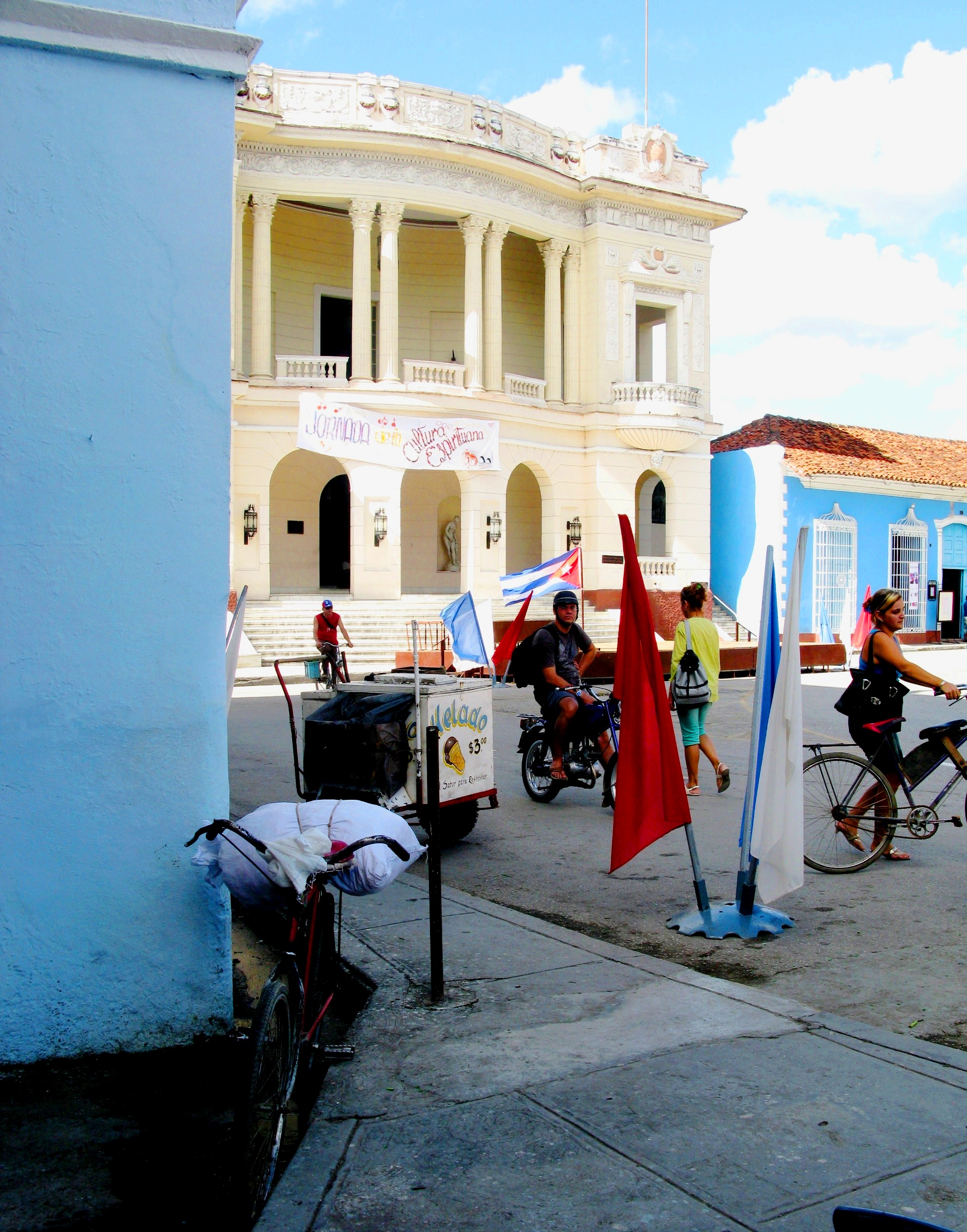 The library was founded shortly after the Revolution when one of Fidel Castro’s early proclamations was:

We do not tell our people to believe, we tell them to read.

It is named for lawyer and earlier revolutionary, Rubén Martínez Villena. In 1999 his image graced a Cuban stamp. 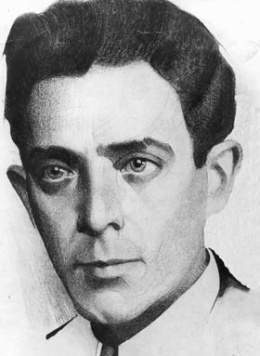 A successful lawyer from a wealthy sugar plantation family, Villena denounced the government of President Zayas and was a founding member of a group of artists and intellectuals called Grupo Minorista that became influential in Cuban society and politics.

Ironically, although consistently accused of corruption, President Zayos’s administration was less corrupt that either his predecessor or his successor.

Image courtesy of Wikimedia Commons and ÑuÑuXb. This file is licensed under the Creative Commons Attribution-Share Alike 4.0 International license.

Zayos came to power in a country totally bankrupt, with debts of more than $40 million and the main export commodity of sugar plummeting in price from .22 cents to .03 cents per pound.

Nevertheless, in his electoral year of 1921, Zayos started the process to give women the right to vote.

In his term he instituted many educational reforms, negotiated the return to Cuba of the Isla de la Juventud whose almost 111 square miles had been occupied by the United States, negotiated a $50 million loan from J.P.Morgan, and was the first Cuban leader to allow free speech and freedom of the press. Unlike his predecessors or successors, he did not imprison his critics.

President Zayos served only one term. He was succeeded by General Machado.

Machado had been elected with popular support, but with increasing power and not honouring his promise to serve just one term, he suppressed free speech and used strong arm police tactics against those who objected – later in history being considered a dictator.

Despite by then suffering from the tuberculosis that would be his demise, Villena organised the general strike that ended Gerado Machado’s government.

I find it ironic that the library in Sancti Spíritus is named for a man who opposed another man (Zayos), both of whom valued learning, and in giving wider opportunity for people to learn.