The beautiful Marienplatz in Munich has been much photographed, and I arrived as the Munich Christmas Market was setting up to open the following evening. 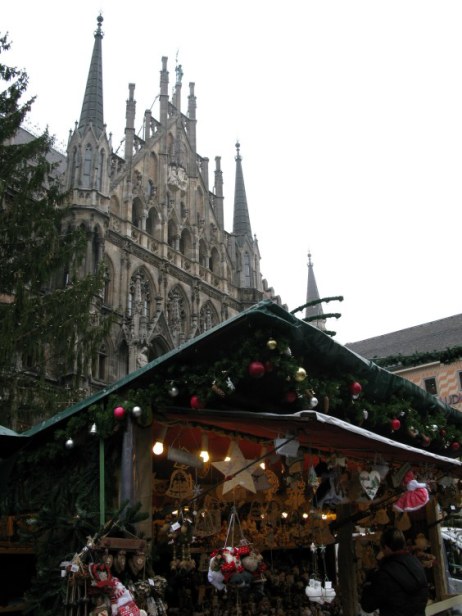 The Munich Christmas Market is an attraction for visitors from around the globe. It cannot be any wonder for it is a spectacular setting – and before I could alight from my taxi the driver had to manoeuvre the taxi very skilfully to avoid Japanese tourists posing before a colourful stall but standing in the middle of the street to do so.

Surrounding the Marienplaz in Munich are truly beautiful buildings, including with the Flemish Gothic styling of the 'New Town Hall' (started in 1867 and completed in 1909) and its famous 'Glockenspeil' in the clocktower. 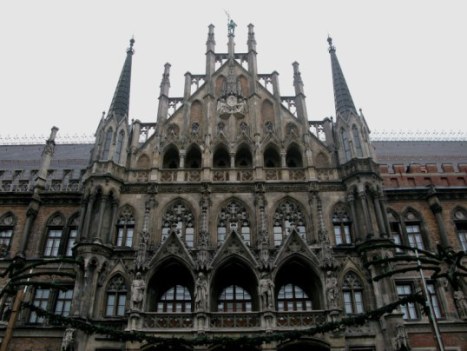 The Glockenspiel itself is well worth waiting for: it is a 15 minute spectacle consisting of 43 bells and 32 life-sized figures cccculminating in an ending  announced by the singing of a golden bird from atop.

Unfortunately, as I was there to do business, I missed the performance, but here it has been captured on video.

In winter the Marienplatz Glockenspiel plays at 11a.m. - and in summer both on the hour at 5p.m. and midnight.

Below it, the doors to the New Town Hall indicate that that once closed they will brook no forced entrance. 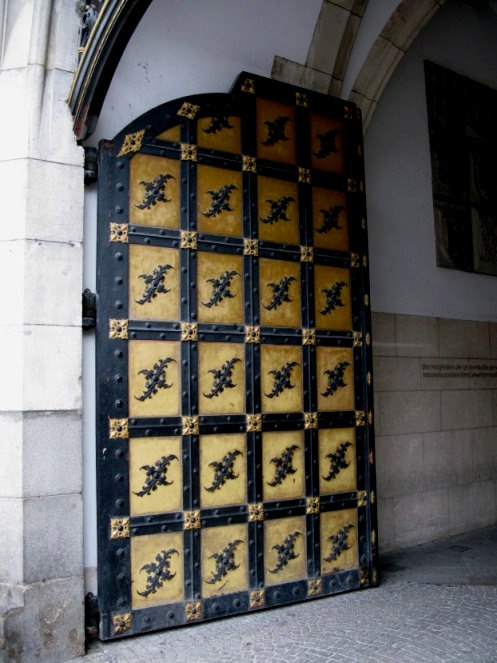 Though there is a peep hole to see who is there ...and at Christmas time the signs beside the door point festively to events of a festive nature. 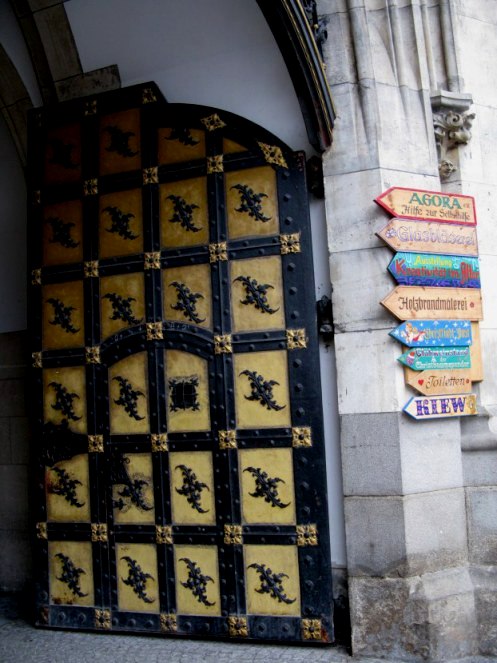 The Old Town Hall stands on the other side of the Marienplatz flanking the Munich Christmas Market. It dates from the 14th century. 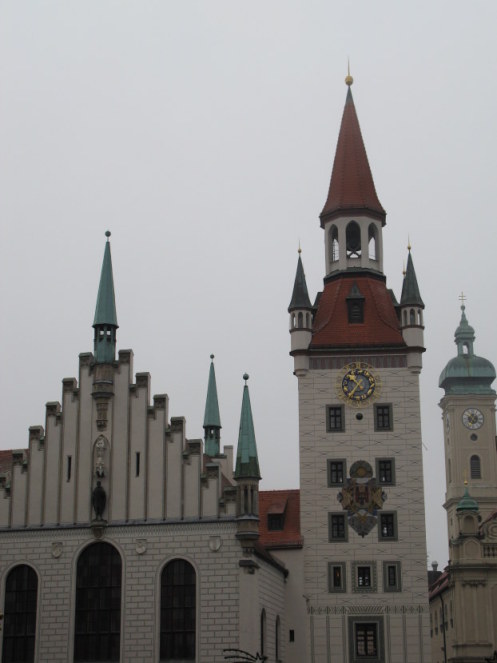 In the Mareinplatz itselfthe golden statue of Saint Mary stands atop the 'Mariensäule', the Column of St Mary.

The Mariensäule was built to mark the end of the Thirty Years War and Swedish occupation, and when I returned in the evening several days later, it was as if Saint Mary was eager to join in the festivities as the crowds massed around it. 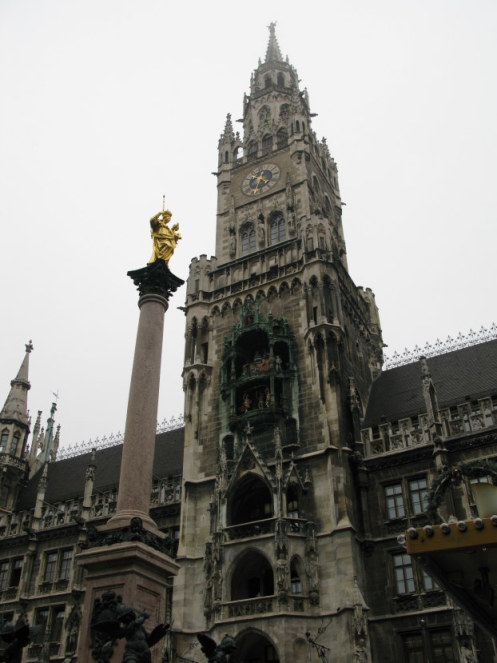 On the day of my frist visit to the Munich Christmas Market I had arranged to meet international colleagues at the Ratskeller. This meeting place is something of a Munich tradition. 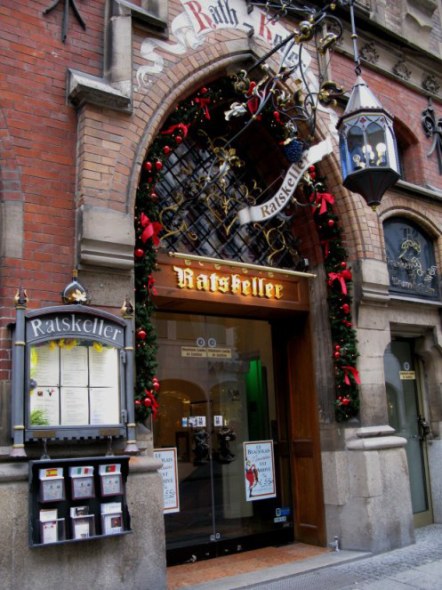 However, I still had some time to spare and went for a quick wander around the setting up of stalls.

It is a big job to get all the booths and attractions ready and safe for the thousands of visitors who will arrive over the next three weeks.

Here Santa’s sleigh had no snow in the driest November since Germany has been keeping records, and sat instead amongst the autumn leaves, looking rather forlorn, only to be quite transformed by the magic of the evening – as you will see on the “Munich Christmas at Night” page. 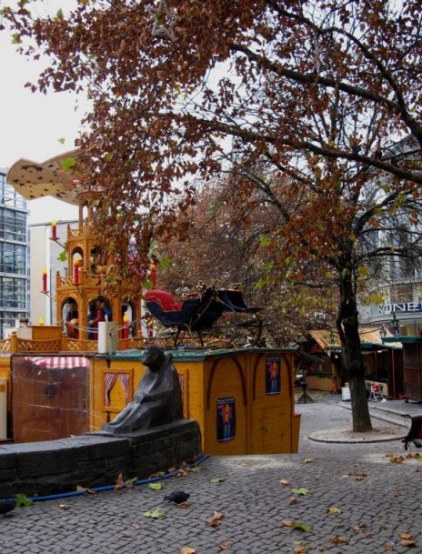 Further along, the Christmas tree in the shop window made an interesting juxtaposition against the autumn colours outside.

Under the arch leading into the Marienplatz where the Munich Christmas Market is spread out I stood briefly to try to work out what the zzzzzzzzzzzzt, followed by a sort of clicking sound was all about.

When I looked up, I saw this wonderful 'whatnot' – a curious invention of wheels, gears and sound effects that announces the Toy Museum. 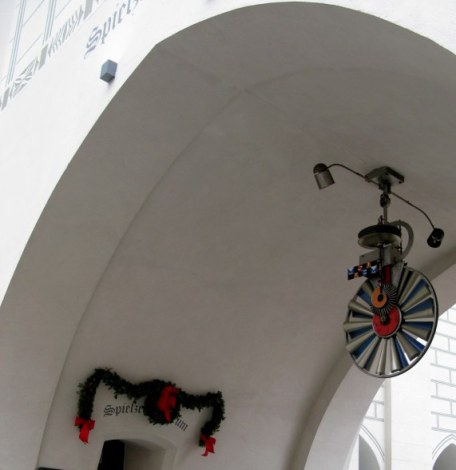 Passing the wonderfully named 'Deeply Felt' I had to pause.

For me Christmas is all about colour – and here there was no shortage of it. 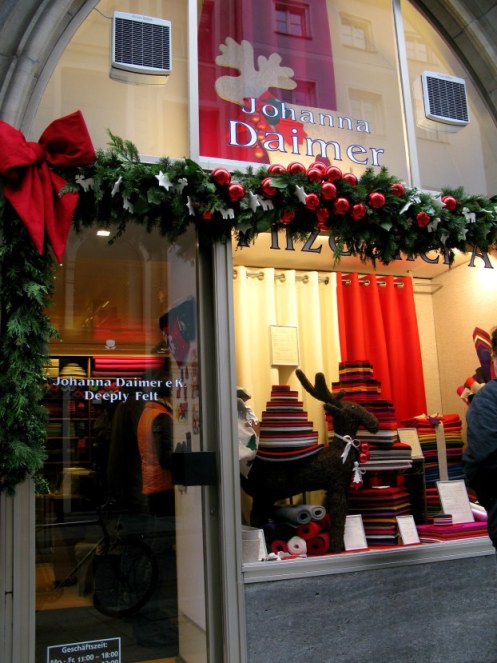 Looking at the character of the window reindeer (made of felt of course), I wondered who uses felt besides those of us who craft things, and the Bavarians who use it to good effect in traditional attire…and hunted down the website to see: and WHAT a funky site it is...

Across the road I was drawn to another Munich Christmas Market in the fantastic Dallmayr store. 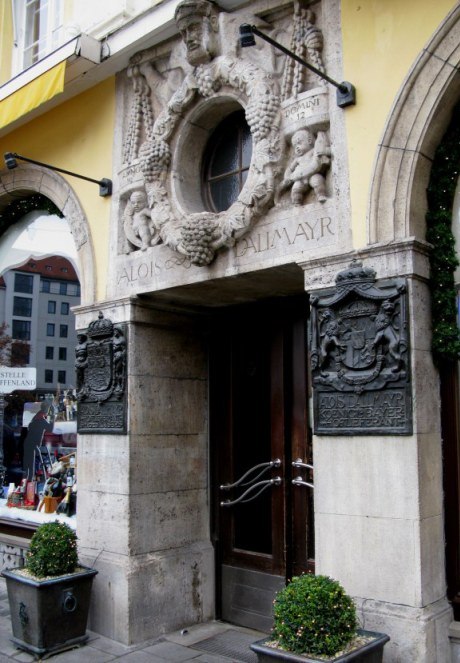 Here was a Munich Christmas market that was warmer than the market in the Marienplatz, but no less festive. 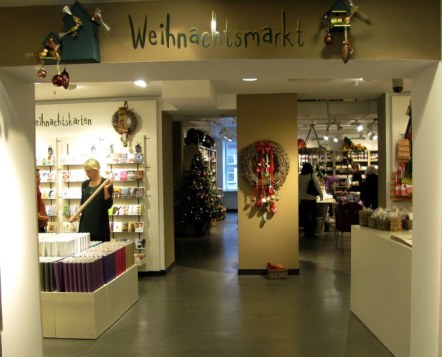 Everything was beautifully laid out to tempt the money from your wallet. 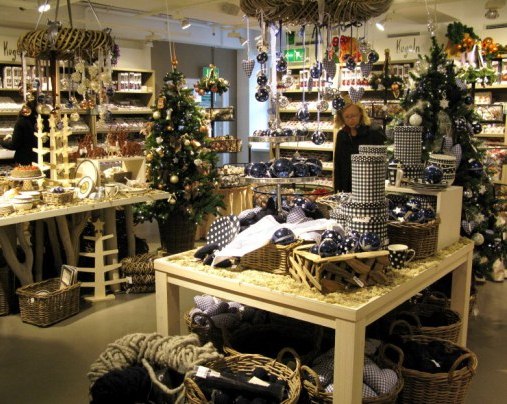 The store has existed since 1870 when Alois Dallamyr, orginally from Wolnzach in der Hallertau, started his company.

Dallmayr was later to sell his store to Anton Randlkofer – who later married Dallmayr's widow, Therese, before dying himself, two years later.

Therese was a clever marketer and by the early 1900's the company was awared the equivalent of an English 'Royal Warrant' as suppliers to the royal court of Bavaria.

The Dallmayr store is a wonderland for the senses, a sort of Harrod's Food Hall with European flair. 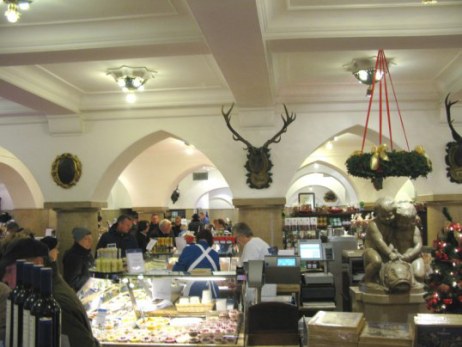 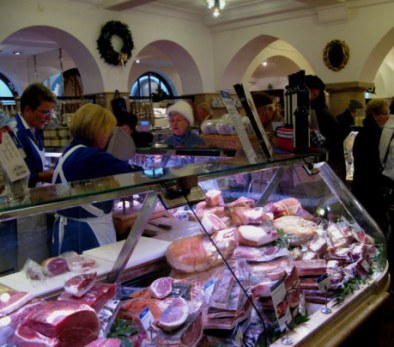 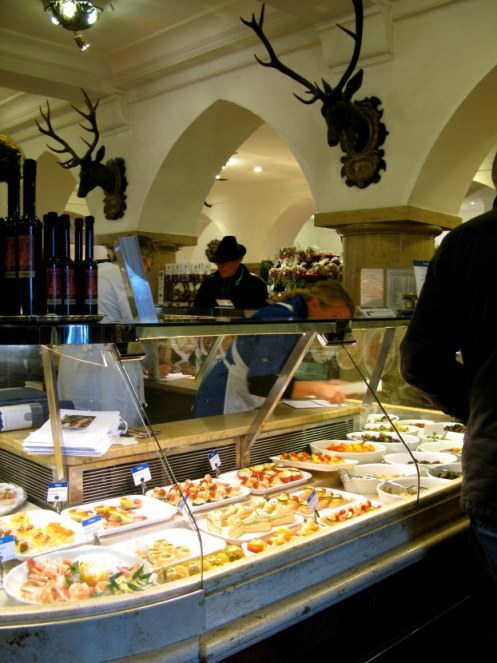 ...all in the most elegant surroundings. 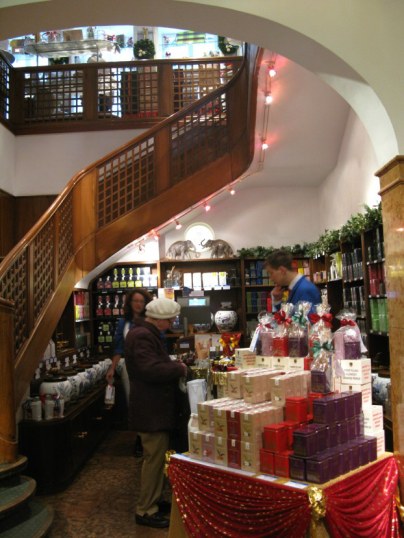 The Great Depression urged a need for new markets for the Dallmayr store and that is when the now famous Dallmayr coffee business was born, driven by a 19 year old coffee specialist from Bremen, Konrad Wille.

It is still available from the source, here at the Dallmayr store in Munich. 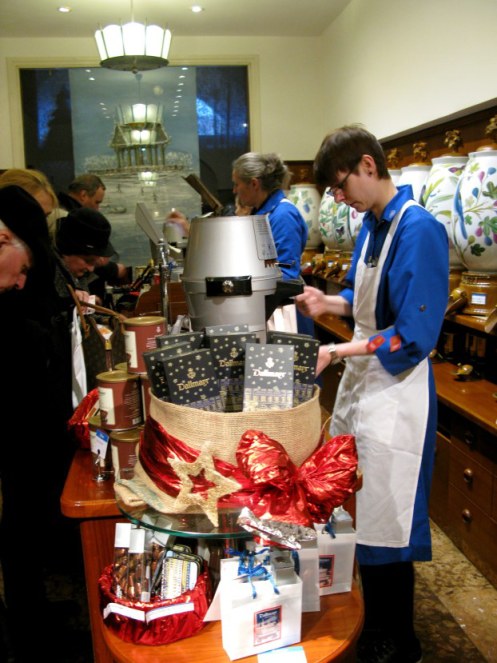 It is a good place to pause for a coffee and take a rest in the midst of Christmas shopping. 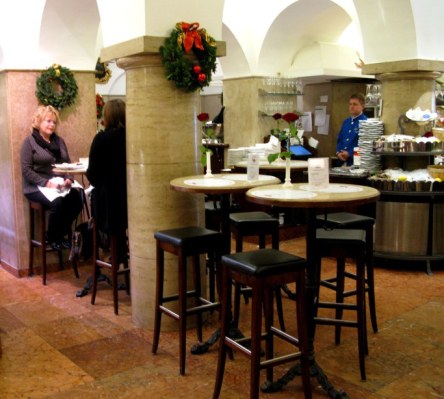 ...or perhaps for something of a more celebratory nature, such as a glass or more of champagne. 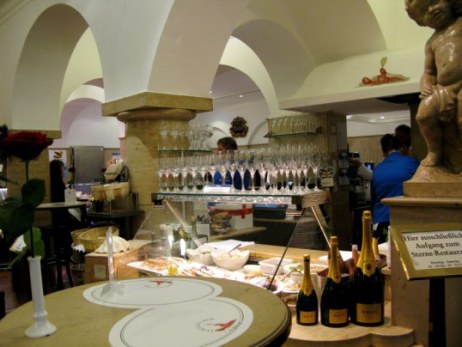 The streets around the Munich CHristmas Market are full of small vignettes to charm you as you stroll around – like this beautifully crafted canopy over a shop front door.

Returning to the Marienplatz, the fog seamed to add to the character of the Christmas market. 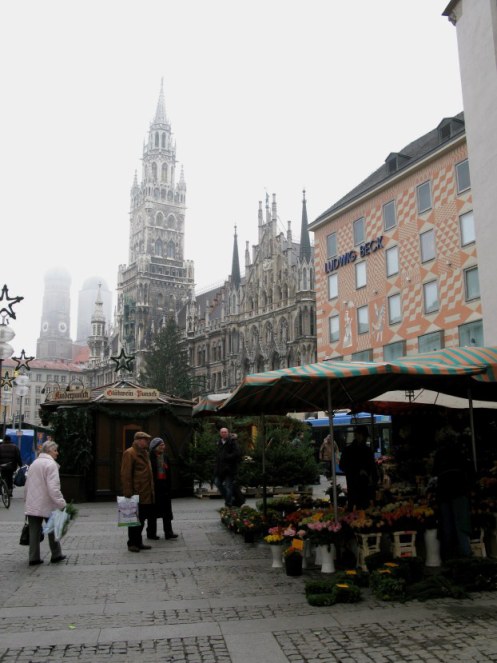 While I waited for my colleagues and planned to return to a fully operational Munich Christmas Market, I saw this funkily dressed young woman by the Fish Fountain.

I was reminded of something a friend used to say to me when I wore my crimson business suit:

She's here to be looked over 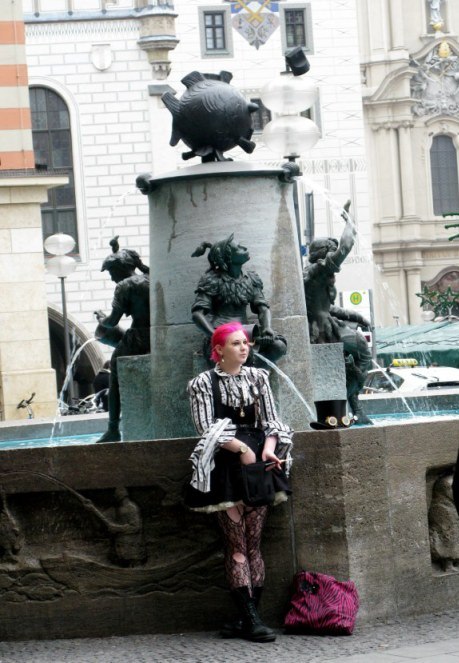 Munich is full of style and at the Munich Christmas Market it is everywhere!