The Almendares River winds its way down from the heights of Bejucal, 47 km ( 29 miles) away, eventually flowing between the Havana suburbs of Miramar and Vedado to the Straits of Florida. 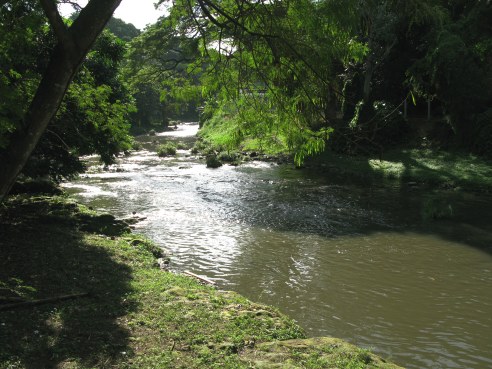 A few miles upstream is the Almendares Park. You first meet the river from a bridge just beyond some houses and a baseball field… and it seems to play its magic on you right from its first introduction. 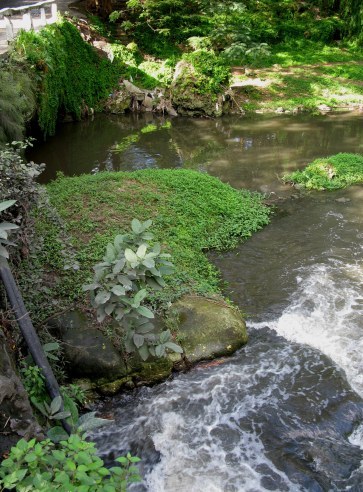 The pathways track through the dense greenery and given the age of these old steps, it has obviously been a source of attraction for considerable time. 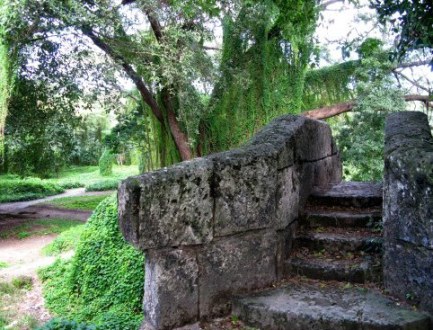 The rampages of the plant Kuzu

The banks of the Almendares River make for a mystical place indeed, with its curtains of vine draping over the ancient trees.

It wasn’t until recently that I have discovered that the culprit of this stage drape is a plant mistakenly called Kudzu when translated incorrectly for the Japanese, from where it originates and where it is known as Kuzu.

The way that this Galloping Gertie has overtaken the landscape of many southern states of the USA is a classic example of an introduced species run riot.

Now covering some 1011 square kilometers, (a quarter of a million acres) of Alabama and 28,327 sq km (7 million acres) across the whole southern states, this was a plant widely promoted to save the drought-parched earth during the Great Depression.

Over 85 million seedlings were distributed to landowners for fixing the soil.

It travels some 10 to 30 metres in one growing season, blocking out the native growth with its dense foliage.

One single root crown can produce 30 vines and in America is widely known as ‘The Vine that ate the South.’ There, it is now officially a noxious weed.

The spread of Kudzu reminds me how foolish we are to intervene with ‘better fixes’ than nature provides. 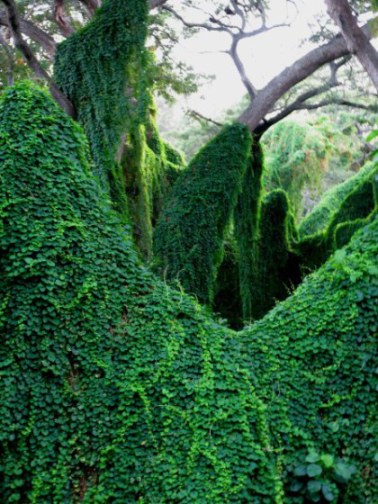 Almandares Park is a quiet place where your thoughts drift through the warm air and it seems safe to speak your dreams aloud under the hush of the wavering vines above.

You get the feeling that these cloaks of green will hold the dreams you offer until the universe moulds them into a future reality.

I thought of Rabindrath Tagore’s philosophy that:

Trees are the earth's endless effort

to speak to the listening heaven 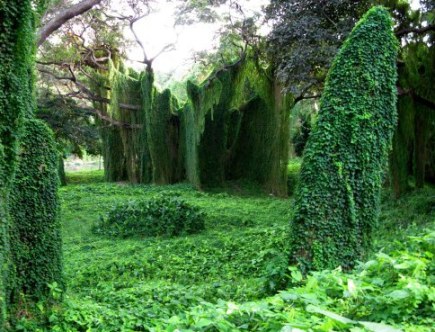 It seemed not unusual to me then, when my Cuban friend explained the importance of this area to those who believe in Santería, for it is generally accepted that the Almendares River is a good place to come to make your sacrifices to the Santeria spirits and set your world to rights.

We came across a small group doing just that, having just slaughtered their chickens and continuing the rituals for the spirits they sought to contact. These sacrifices they employ in the pursuit of their wishes, by appeasing the spirits with their gifts.

Voodoo is an everyday blend into Cuban life – but not the voodoo of the black arts – instead, a special voodoo of benevolence and of direction.

Many of my Cuban friends would unfold a worn out piece of paper from their wallet, with hand-written instructions about special offerings that need to be done to accomplish certain dreams.

Santería can be translated as 'rule of the saints'. It’s a good translation, for Santería is a belief system that combines the African understanding of the interconnectedness of the universe – and Catholic belief in the power of saints. 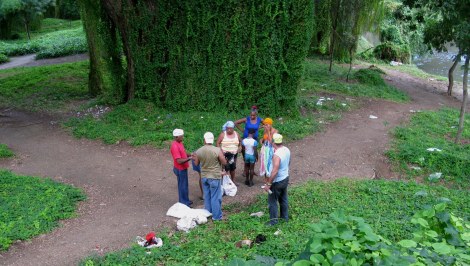 The colours in the skirt of the girl on the right reflect those of the saints with whom she is associated.

The ceremony was being led by the 'godfather' of the group. 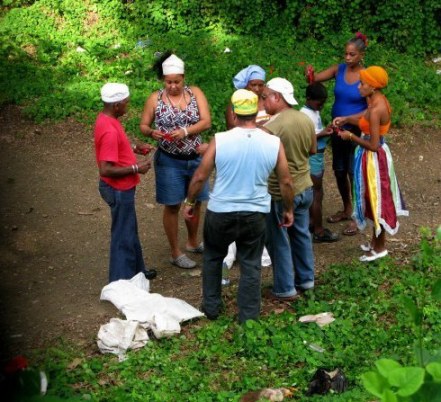 We walked a considerable distance, talking about life, about dreams and about possibilities.

A man stopped his car briefly and threw a plastic bag into the vines before hurrying back to his car and driving away.

I would have interpreted this as throwing rubbish into the park but almost as quickly as the thought formed, it was corrected.

“You see! That man has brought his sacrifice to the Almendares River. He will have prepared it correctly and brought it quickly, fresh to the spirits.”

The buzzards circling overhead seemed keen to assist the spirits to enjoy the offerings. 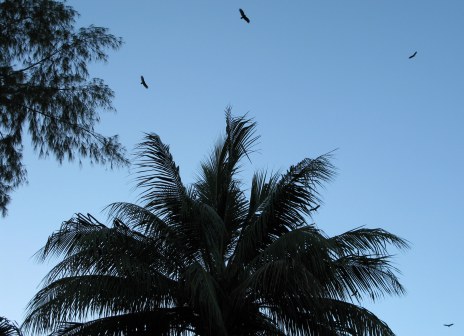 Further along there was a tree filled with these birds – feathered 'sanitary engineers' cleansing the park in harmony with man and the spiritual. 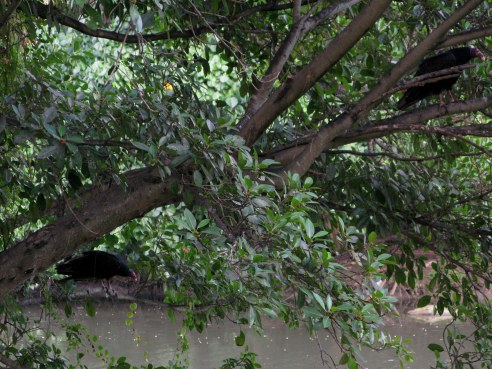 Pollution of the Almandares River and Park

Given the popularity of the Almendares River for such offerings – and the fact that the river is a primary source of fresh water for Havana, I was pleased to see them diligent in their duties, for there was definitely work to do.  The remains of offerings were to be seen all along our route. 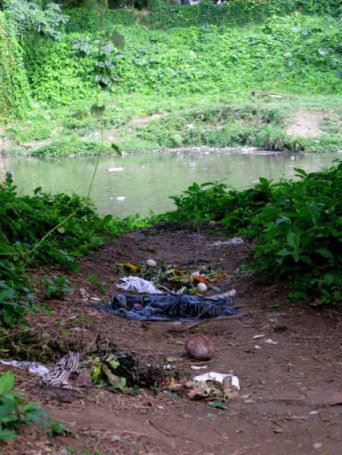 The waters of the Almendares River are already suffering from ailments of their own.

Cuba has industrial pollution – although there have been recent cleanups of the Almendares River basin – but uses few antibiotics in agriculture or medicine – yet still has notable unexplained increases in antibiotic-resistant infections.

This provoked a recent study done in partnership between the School of Civil Engineering and Geoscience of Newcastle upon Tyne, in the U.K. and the Instituto Superior de Tecnologías y Ciencias Aplicadas (Superior Institute of Applied Science and Technology of Cuba). However, this failed to find the source of extra high-levels of antibiotic resistant gene levels in the water.

It didn’t seem that the river needed the left-overs from the spiritual beliefs of the people who love it - and love it they do.

The Almandares River has inspired many, including the Cuban poet Dulce María Loynáz. In a poem she calls the Almendares River the 'river with a musical name'.

You can hear the relationship of river and person in her poem about it:

I will not say

what hand tears it away from me,

Nor inside of what stone of my breast

does it find its source:

I will not say it is the most beautiful

But it is my river, my country, my blood! 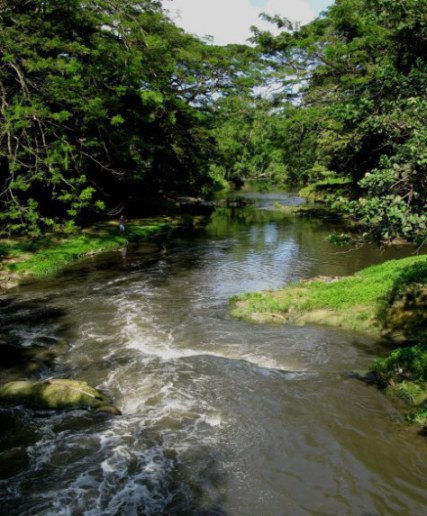 Reading this, I wanted to read more of her poetry and came across this, translated by Ilan Stavans:

love is to turn oneself

for the tiredness of every day;

to put the living sun

in the anxious, blind seed

that lost its path searching for light,

imprisoned in its soil,

defeated by its own soil.

Love is to untangle

spider-webs of roads in darkness:

Love is to be a road

Love is this loving of what pains us,

what makes us bleed inside…

No wonder that eventually, at the end of her life, and like her musical counterparts in the Buena Vista Social Club, the work of Dulce María Loynáz was finally recognised – in her case with the Cervantes Award for literature. 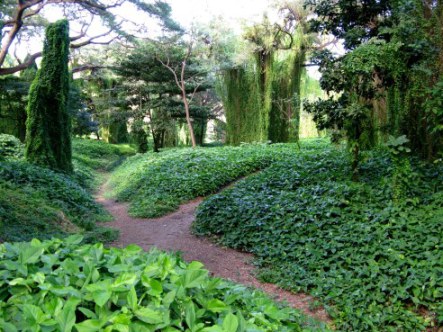 As we wandered along through the pathways beside the Almendares River we came across this old classic 1953 Ford Prefect, dressed in its umpteenth layer of paint, this one blue, whose driver had been down on the river bank making his sacrifices. 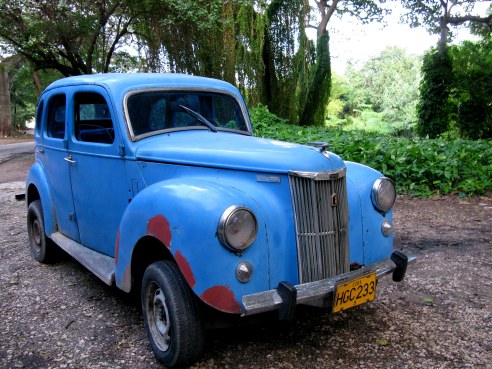 In the course of thinking aloud together and discussing the possibilities of the spirits inhabiting trees and rivers, the distance we had travelled suddenly translated itself into a desire for refreshment.

Happily, this had been anticipated and I was steered here to a little bar – a haven in the forest.

It was the perfect place to rest, drink a Buccanero and a Cristal beer respectively, and just sit quietly as feet and body regrouped for the return trek. 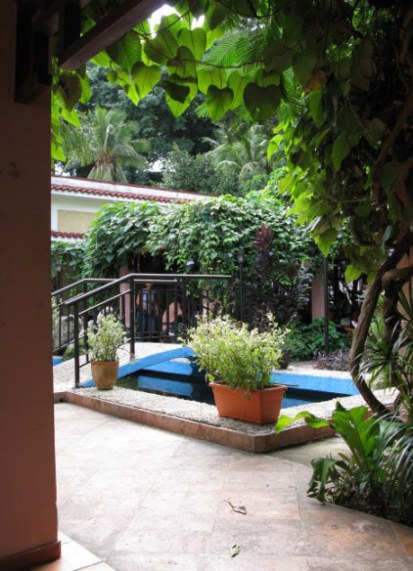 The afternoon was fast becoming evening by the time we returned along the pathways beside the Almendares River, and past the Ceiba trees to the bridge where we had started. 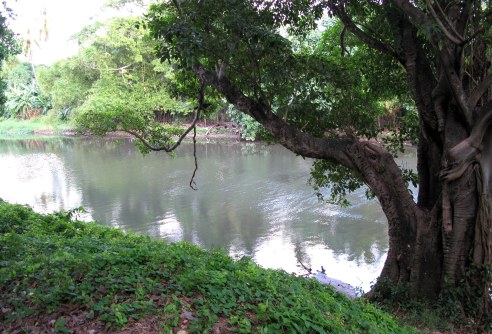 The little group of Santeria followers we had seen at first had just completed what must have been a very lengthy ceremony.

Only now after all this time, were they headed back through the vines. 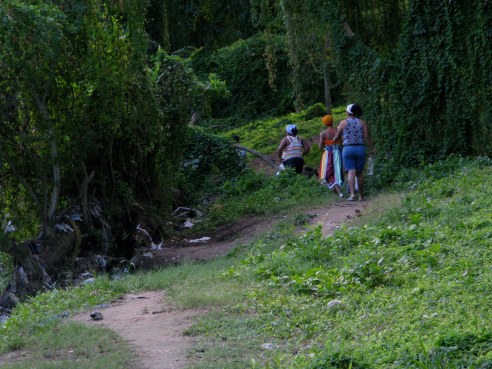 Above their clearing, and a little way off at the head of the old stone stairway the group’s taxi driver patiently waited, standing beside his large Desoto station wagon. 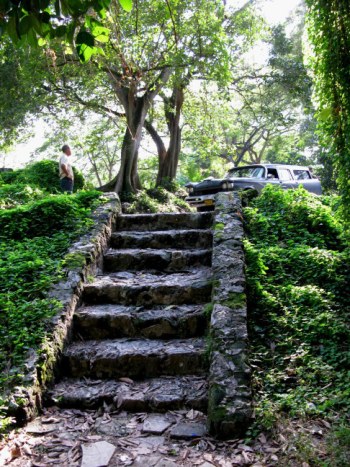 Apparently, it is not uncommon for a Havana taxi to be hired to come here as emissary to the gods bringing the small groups and their various sacrificial livestock and waiting for as long as is required before returning the people to the city.

As we wandered along through the pathways beside the Almendares River, I stood for a moment and took a deep breath, looking up through the forest canopy.

I had arrived in Cuba with no plan but had reserved a parking place of four days in a hotel so my 'No Plan' plan could evolve.

It was day three.

I still had no plan – but having let go of the need to make one was unraveling all the tensions of a life full of plans and their timetables.

This day had not been planned. It just happened.

In the course of it, so did an intermingling of spirits, of dreams, of ideas and of stories – all wound together under the protection of this magical place. 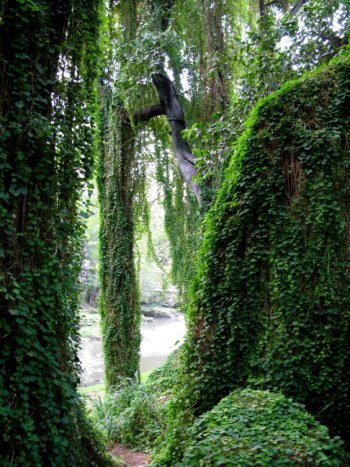 At the bridge I looked back at new groups of people sending their hopes and dreams to the spirits for guidance, for recovery from illness, for safe passage through life’s dangerous and sometimes heart-breaking passages. 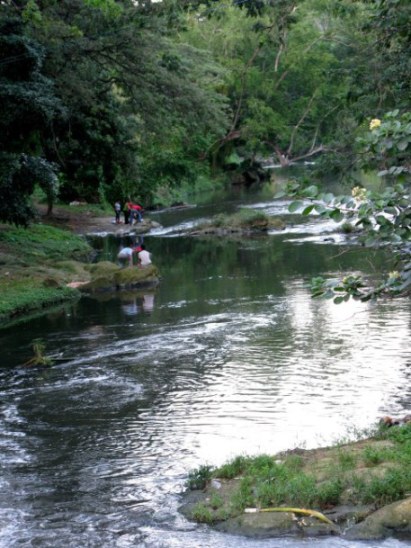 Who can say whether the spirits hear them?

But certainly it seems likely that in such a place as the Almendares River they may – and may be moved to act on them.

I thought of the Apache proverb

In the course of that day, I left some dreams there for the spirits.

So far, the voodoo is working.