It really is a must to visit Notre Dame Cathedral. Read these pages that were written before the fire of April 2019, but still go there and pay your respects to a grand lady much loved in the world.

To donate to her restoration here is the link to the Dartagnans fund.
Dartagnans have long been great preservers of partimonie with their Crowd Funding efforts.

Is it worth the climb of the Notre Dame Tower in Paris? 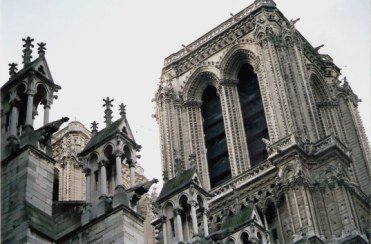 The Notre Dame Cathedral Tower: Is it worth the climb?

YES. It WAS worth it, even though it meant climbing 387 steps.

Climbing these steps, one tends to be asking the Good Lord to help you get to the top without expiring.

At about step 236, a wry quote came to mind that has been attributed to someone whose last name has particular appeal to me, Sam Redwine, Jr.:

Software and cathedrals are much the same -

first we build them, then we pray.

This quotation has particular relevance to me, having worked in leading global IT transformations where on occasions, this may well have been the mantra.

How to book tickets for the Notre Dame Tower in Paris

Since 2017 you have to book ahead to do so. This can only be done on the day of your visit, but it is only possible to do so from 7:30 in the morning of that day on the app 'Jefile' available from the Google Play Store. If you try to open the app to book earlier than that day it won't respond.

Book from a hotel computer, your own laptop or other device, including mobile phone - or from the machine next to the tower entrance at the cathedral.

You may choose your time slot for any time after 10am (available in 10 minute slots).

Numbers per slot are limited to seven people, so if you have more than that in your group, make appropriate allowances to book multiple slots.

Before the current system was in place, there was a human intervention in assigning the number of people allowed to climb the cathedral tower, and it was just as closely monitored.

Once on the tower ramparts, I would have liked to have had time to really focus on the timbered house behind this square, or the more simple church in the park beside, but there we had no time to linger.

Another group was upon fast on our heels and we were shepherded onwards. 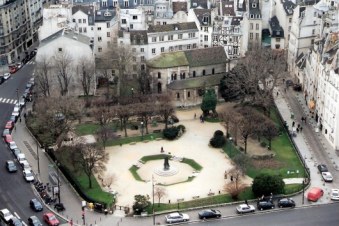 Far in the distance there was the Sacré Coeur, and in the foreground, orderly rows of buildings. 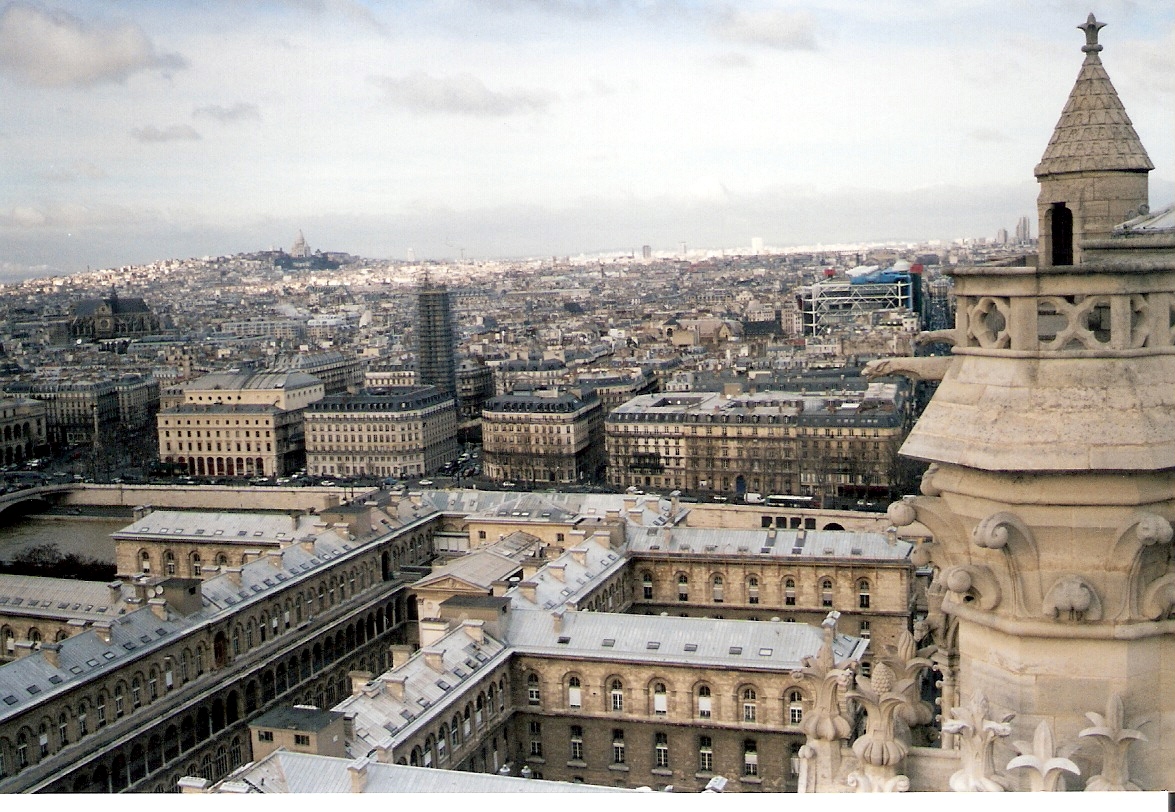 But a better view was from another section, with the stunning whiteness of the domes of Notre Dame calling me back to their hilltop. 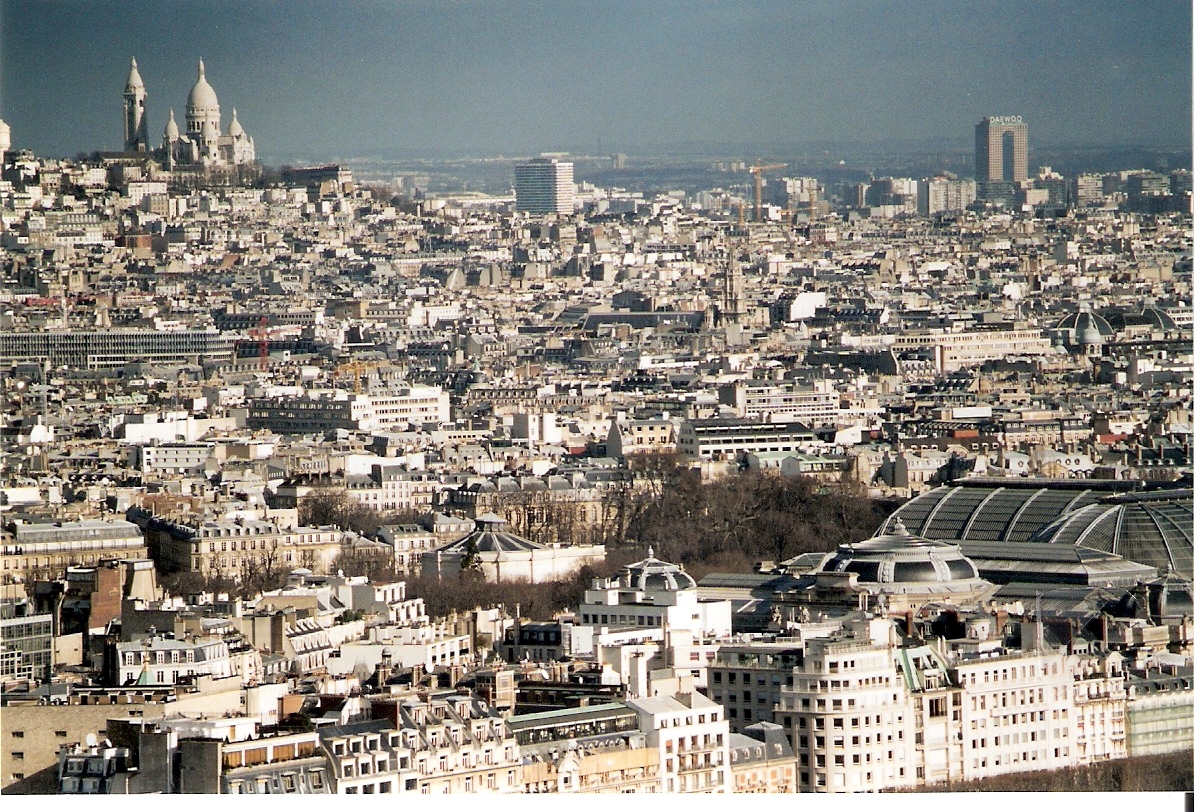 In the other direction there is the Eiffel Tower and when I was there, the January Seine muddiness that  flows past 10 of the 20 'arrondisements,' or districts, of the city.

The Seine is a busy commercial waterway and brings with it the mud of flooding upstream. It is not a good thing to think about when half of the water used in Paris comes from the river - cleaned first of course! 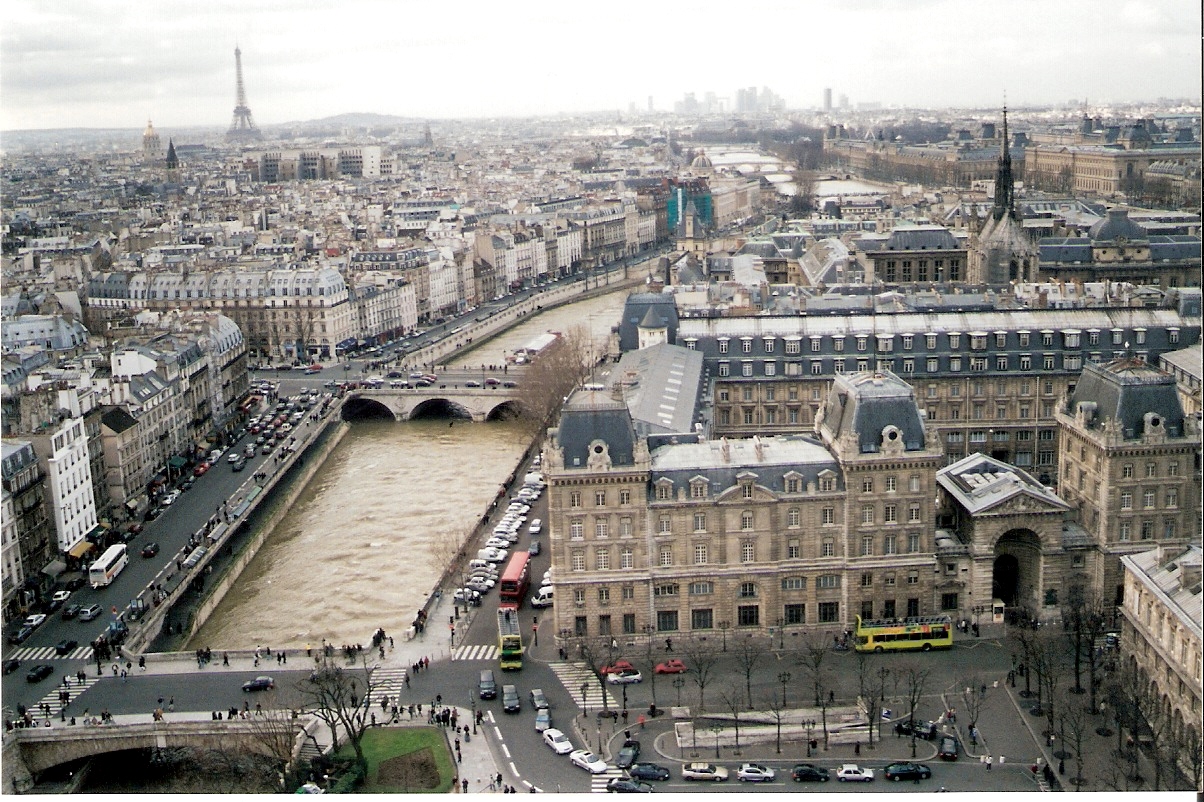 From every direction from the top of the tower there is a visual feast reflecting Haussmann’s layout of the city.

Georges-Eugène, 1st Baron Haussmann was actually educated as a lawyer, but being a good musician, he concurrently studied music at the Paris Conservatorium of Music. These studies seem a strange background for his future role in civic planning when he became Prefect of the Seine Département.

In this capacity, he was undaunted in securing the funding for his massive rebuilding of the boulevards, the twelve grand avenues radiating from the Arc de Triomphe, La Défense, and the Grande Arche, and the street facades of Paris (plus the sewers beneath): all started under the reign of  Napoleon III.

Haussmann eventually ran foul of the government for the vast cost of his massive renovations and his place in history varies according to one’s perspective. Some see him as the person who destroyed medieval Paris, and some see him as the architect of the new, and much treasured city we now enjoy. 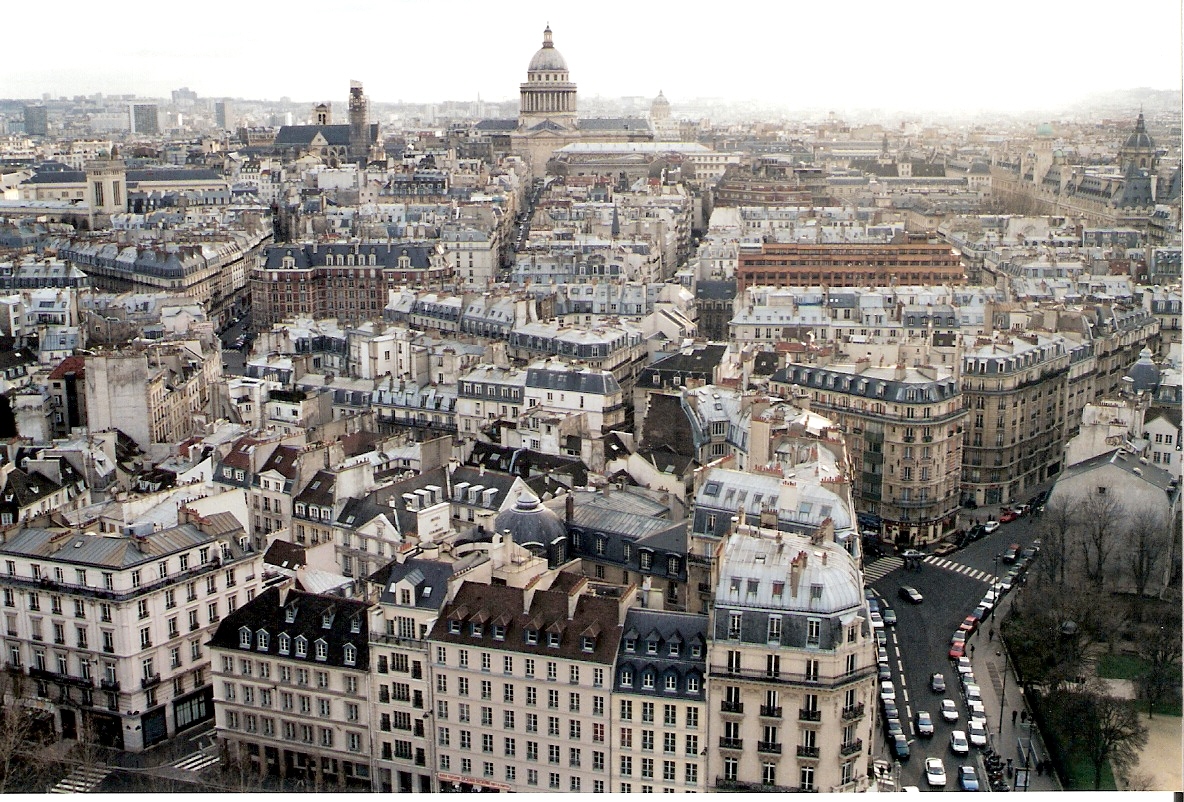 As you move around the parapets, the vastness of the Paris landscape is laid out for you to find all your favourite landmarks, but some of the most famous of all reside right there.

The gargoyles and other guardians of Notre Dame in Paris

As if you needed another incentive, many think the best reason for climbing all those steps is the chance to be ‘up close and personal’ with the gargoyles and other tower guardians. 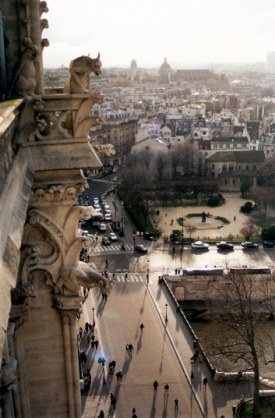 The term 'Gargoyle' comes from the Latin word 'gurgulio' – having the double meaning both of 'throat' and the gurgling noise made by water running through a drain pipe. This seems appropriate for the fact that the purpose of a true gargoyle is to project rain water far from the building through his open mouth. Gothic cathedrals usually required an army of gargoyles to handle the rainwater.

The fantastic and often weird creatures that often accompany gargoyles on their lofty perch, but don't usually serveirrigation purposes, are appropriately called 'grotesques'.

Popular history suggests that they were often malicious caricatures of people with whom either the person commissioning the work, or the artist, had a difference of opinion. 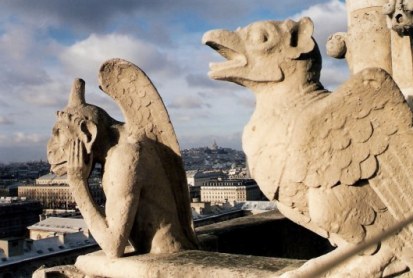 Not knowing the personalities on which they were modelled one can still recognise that their faces were designed to parody. All that we recognise now, is what a marvellous foil they make for the city of Paris over which they stare. 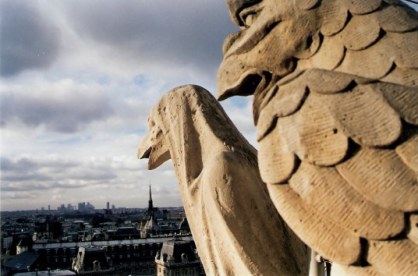 I am pleased to have made a passing acquaintance with them – grotesque and gargoyle alike.

They were on my list of 'Things to Do in Paris' and I found it somehow comforting later, to know that they watched over me as I explored the city, its monuments, and hidden places. 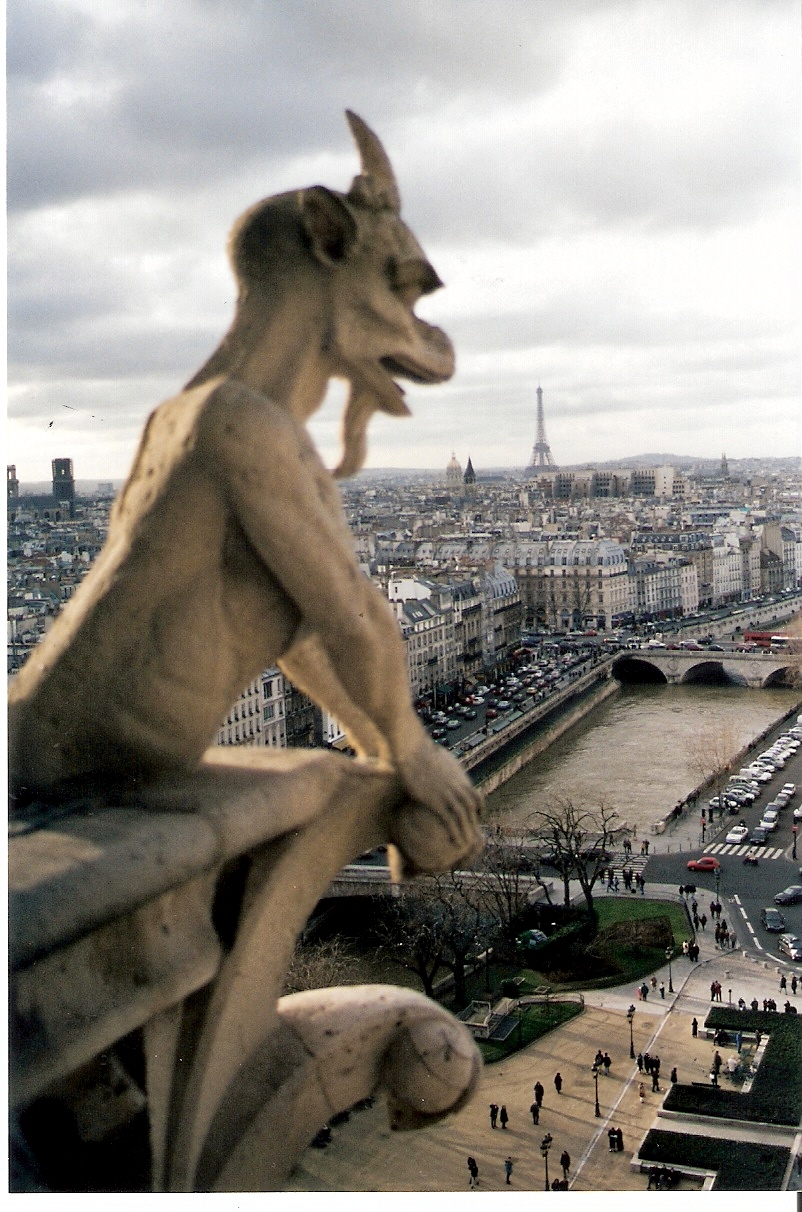 As Oliver Herford said in this ditty:

The Gargoyle often makes his perch
On a cathedral or a church,
Where, mid ecclesiastic style,
He smiles an early-Gothic smile

The Bells of Notre Dame Cathedral in Paris recreated and returned

To mark the 850th anniversary of this grand old lady of Paris, a new a set of bells for its bell tower has been created. These have been carefully cast to faithfully reproduce the sound of beautifully tuned bells that once rang out from Notre Dame to mark the quarter hours of Paris. The originals were melted down to make cannon balls during the French Revolution.

These replacements were cast at the Cornille-Havard Foundry in the small town of Villedieu-les-Poeles, Normandy in the north of France. The process followed medieval techniques: a mixture of 78% copper and 22% tin being melted in a furnace of wood and coal, and then poured into traditional moulds made of clay, horse droppings, and goat hair.

Those fortunate enough to be in Paris at the time they arrived to be blessed, could join residentes to meet the bells before they were hung - a rare, and historic privilege. 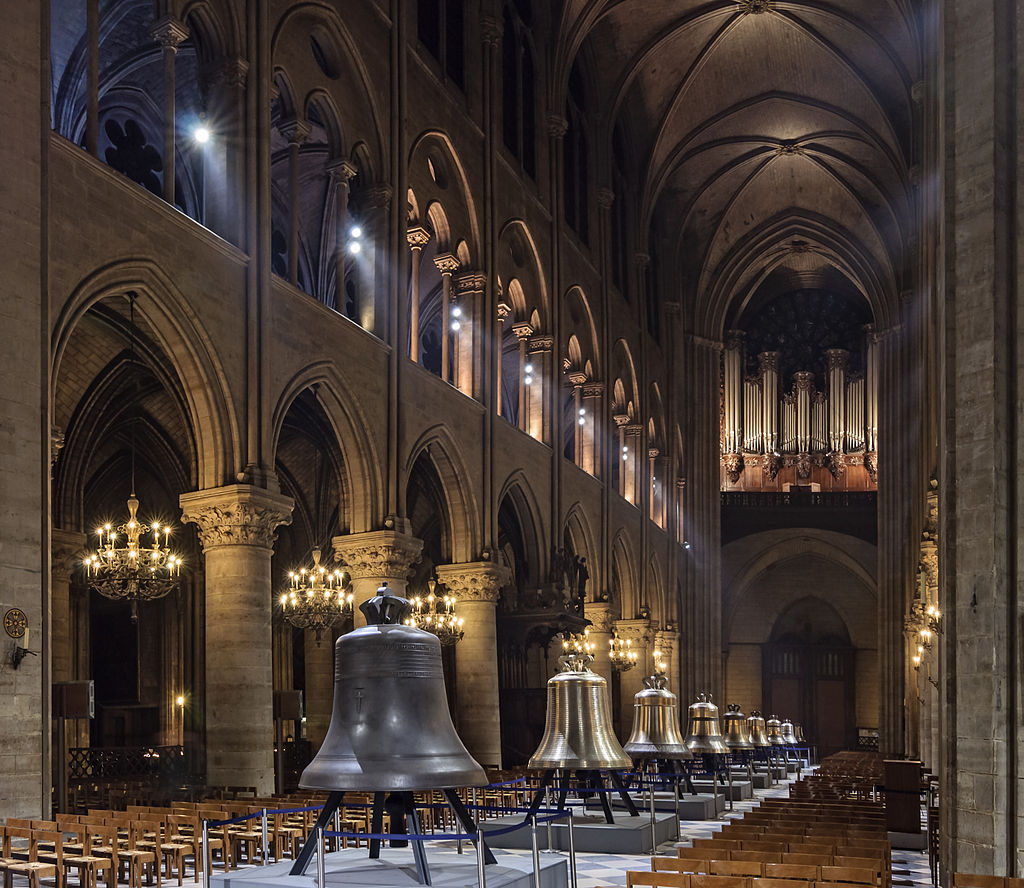 Thanks for the wonderful photo from: Myrabella/Wikimedia Commons/CC BY-SA 3.0
This file is licensed under the Creative Commons Attribution-Share Alike 3.0 Unported license.

The survivor: Emmanuel the great bell of Notre Dame 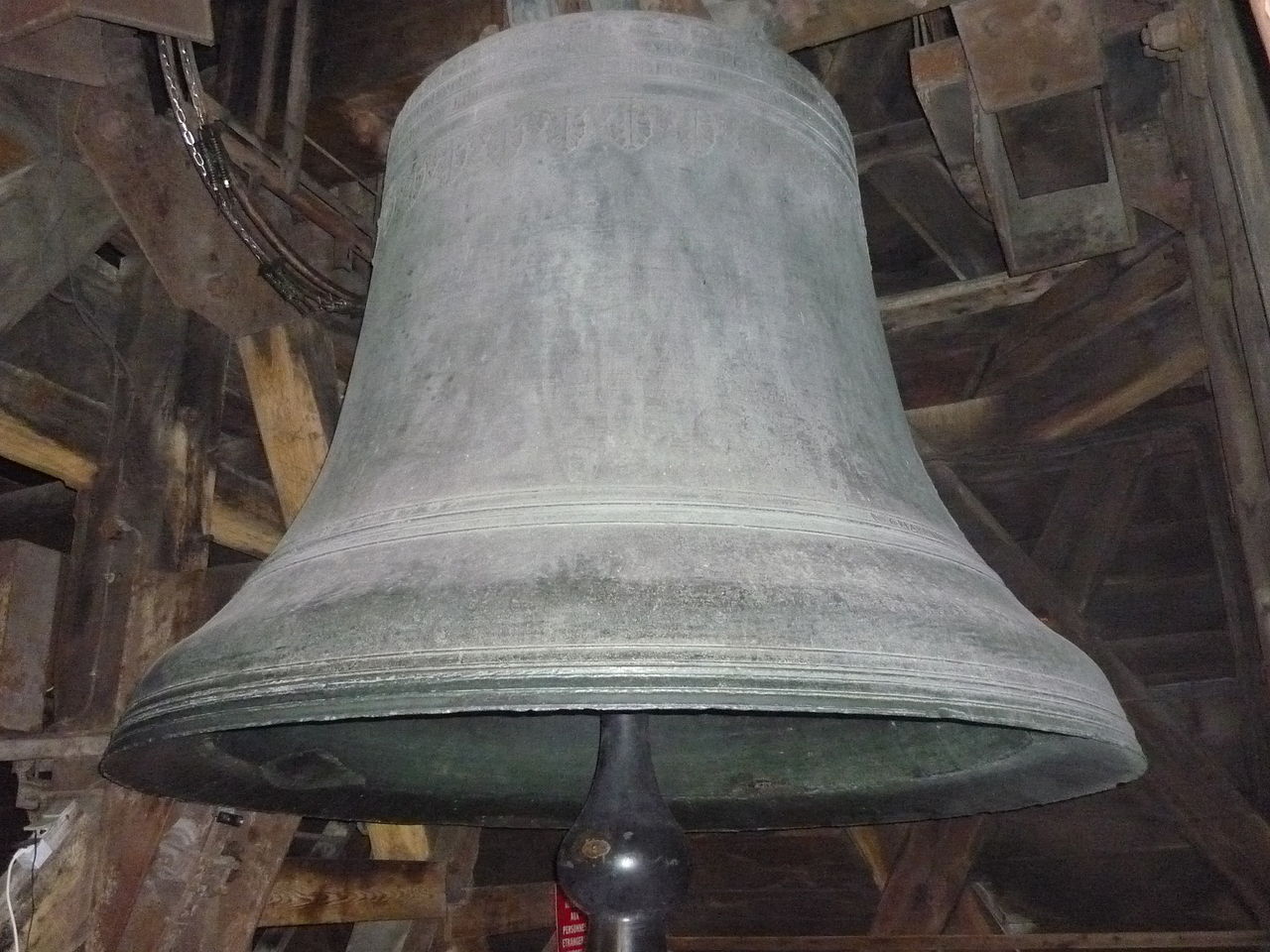 The new set joins the only surviver of the destruction during the Revolution: the 'bourdon' or great bell called Emmanuel.

Emmanuel once had a partner called Marie, and her replacement, also called Marie, was cast in the Netherlands before being sent to Normandy to be tuned with her colleagues.

Emmanuel was rehung by Napoleon and has been the stalwart through ensuing centuries.

As we welcome the return of harmony from the bell tower of Notre Dame, we should still treasure the service of all the old friends - those bells that shouldered the burden of ringing out - even discordantly, for so many centuries.

Angélique-Françoise, Antoinette-Charlotte, Hyacinthe-Jeanne, and Denise-David were the bells so much derided for their poor quality, and who have met their fate in being melted down for scrap. Named for saints, these old friends nonetheless did the job in the absence of others. We should also celebrate them.Their new, more sonorous replacements are companions to Emmanuel to share the responsibilities of ringing out above Paris.

The job that our retiring friends have done alone is now supplemented to make up the original number of ten bells in the Notre Dame Bell Tower: so now we have Gabriel, Anne Genevieve, Denis, Marcel, Étienne, Benoit-Joseph, Maurice and Jean-Marie (also, all named for saints).

The old bells may not have made great music. Their sound may have inspired Victor Hugo's Quasimodo, but those departing bells did the job for centuries, and, for centuries their peel was good enough to mark the quarter hours and ceremonial occasions with a sort of discordant character that had its own peculiar personality.

Over all those years the words of Leonard Cohen could have been the mantra of the bells of Notre Dame :

Ring the bells that still can ring

There is a crack in everything.

That’s how the light gets in.

To donate to the restoration of Notre Dame Cathedral,  here is the link to the Dartagnans fund.