A cruise in celebration of a great mariner,
Zheng He

The Singapore Cheng Ho Cruise was one of the 'things to do' on the main island of Singapore and it was  guaranteed to reward investment. The ship is named after the remarkable voyages of the famous fleet commander Admiral Cheng Ho, otherwise known as Zheng He. He is celebrated by this beautifully crafted vessel bearing his name and providing cruises around Keppel Harbour.

I went on the Singapore  evening cruise that according to rates seen for 2018 cost around 57 Singapore dollars.  The morning and afternoon cruises offer a 20 minute visit to Kusu Island.

Even with a horizon dulled by a misty rain so that the mountains and tops of the skyscrapers were soon totally obscured, it was a fascinating trip and with a partner, probably a very romantic one. 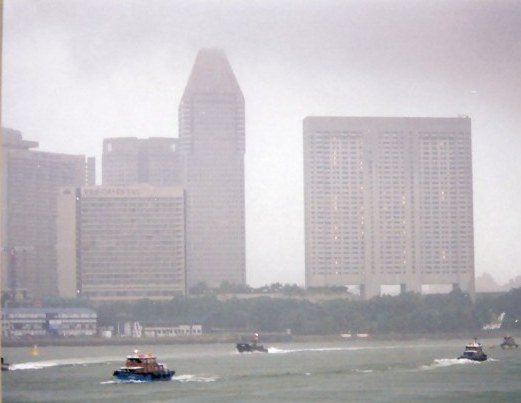 Book your hotel in Singapore

I had been unsure what to expect, but when the Cheng Ho loomed in its gigantic majesty through the foggy mist, I was entranced.

The ship is said to be a replica of a famous treasure ship of the Yongle dynasty, the Da Fung. 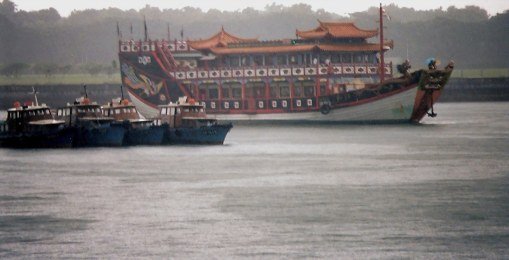 The Singapore Cheng Ho with its brilliant primary colours, golden dragons and Chinese lanterns was like a fairy tale pagoda emerging from the mist.

It seemed strange then to see the ship hands in yellow rain slicks. Somehow, I expected their attire to be as exotic as the ship they served. 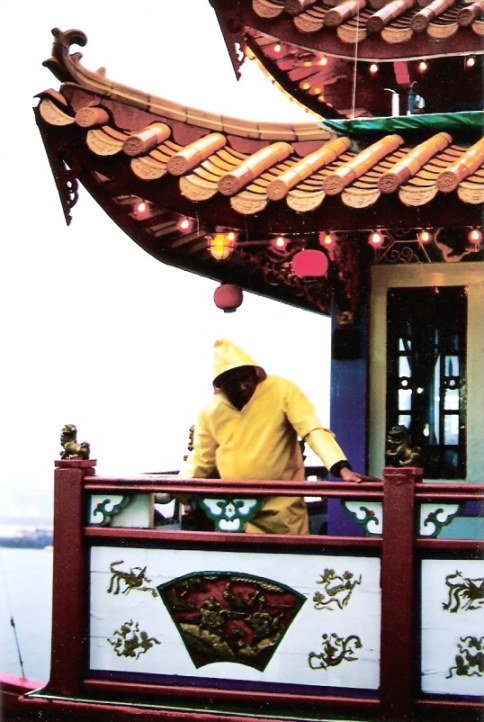 Zheng He’s accomplishments still reign supreme in navigational history and his massive fleets were recorded by both the Portugese Marco Polo and the great Berber traveller Ibn Battuta.

Ibn Battute was possibly the greatest traveller of all time. In his adventures in the 1300s he is reputed to have travelled more than 121,000 km (75,000 miles) - and given that this was over 450 years before the advent of steam travel, this was no small accomplishment.

Zheng Hewas born into an elite Islamic Chinese family but captured as a young boy of between 10 and 13 years old, castrated and brought to serve the court. Here, he soon became a formidable figure. He was physically tall, solidly built and had the intelligence and wit to soon gain elevated positions of trust with the son of the then emperor.

Having assisted in the overthrow of a pretender to the throne, when his master was crowned Yongle Emperor in 1403, Zheng He was appointed as Eunuch Grand Director.

Having taken the throne, the new Emperor wanted to send envoys far and wide to proclaim his benevolence and display the magnificence and wealth of his empire, so he commissioned a fleet of ships to travel throughout south-east Asia and the Gulf Sates of Africa.This mission was entrusted to Zheng He.

The fleets were huge. They travelled to India, Malacca, Indonesia, Malaysia, Thailand and Vietnam, east Africa, Brunei, the Persian Gulf, Egypt, and Ceylon (now known as Sri Lanka), and some say even around Cape Horn.

Apparently, there has been some research into his voyages to investigate whether he may have far pre-dated Columbus’s 'discovery' of America but to date there is no evidence to substantiate this.

Junk - a noun, describing
the most sea-worthy wooden ship
- not an adjective describing things unwanted

The Chinese junk is one of the most sea-worthy of all wooden ship designs and the design has perpetuated throughout history.

It is the sheer size of the vessels of the famous Admiral that are hard to believe. No wonder they are celebrated by the Singapore Cheng Ho pagoda ship. 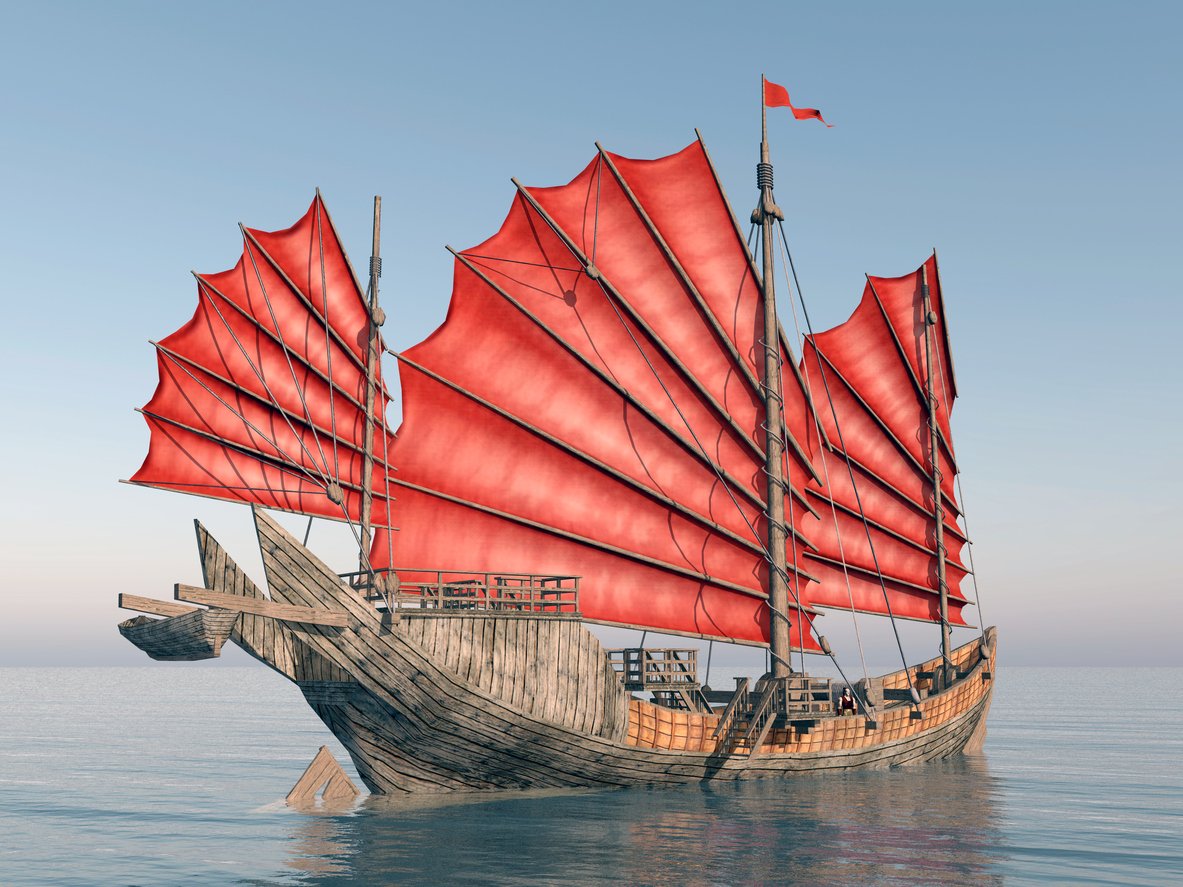 Prizes from the orient from Zheng He

Navigating with the 24 point Chinese compass Zheng He explored and recorded many lands.

On his return he brought diplomats from the countries he visited and many exotic items including animals: lions, oryx, zebra and ostriches. 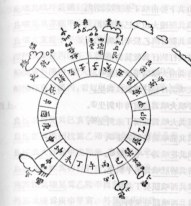 Apparently the most wondrous of all of these was the giraffe sent by a Bengali ruler as a gift to the Emperor in 1414. 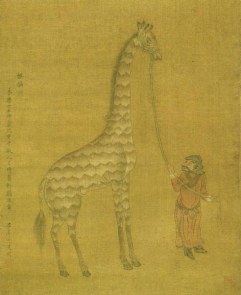 According to Wiki – and widely disputed due to the Treasure Ship with its nine masts being reputedly only stable enough to be used as a review barge in a calm river basin - here is a description of ships of Zheng He's fleet:

The 1405 expedition consisted of 27,800 men and a fleet of 62 treasure ships supported by approximately 190 smaller ships.

Six more expeditions took place, from 1407 to 1433, with fleets of comparable size.

Does size matter
in reporting on Zheng He's fleet?

The historian and author Shirley Fish reported in her book "The Manila - Acapilco Galleons" that when workers were:

"digging a trench along the Yangtze River to Nanjing ...they uncovered a wooden steering post which measured 36 feet long (10.9 metres)...it was calculated that it belonged to a vessel measuring...452 feet (137.7 metres)."

Shirley doesn't attribute her source but the reports of this finding appear on many pages on the internet word for word from someone's original summary of the above, which was the only record of source I could uncover.

When I was visiting around 2009, in a Dubai Mall there was a model comparing the ships of Columbus and Zheng He. Dubai Mall ship models

What it does seem safe to agree upon is that the great Admiral did command vast fleets with ships larger than Columbus’s Santa Maria, La Niña and Pinta, and that he travelled to all the countries to which his voyages have been attributed. Each of Columbus's ships would have fitted three times when laid end to end onto the deck of Zheng He's Treasure ship.

The elaborately decorated Singapore Cheng Ho cruise vessel that offered cruises on Singapore Harbour is a fitting tribute to the great mariner.

The incongruity of seeing what appeared to be a Chinese temple floating on the modern harbour gave some idea of the wonder with which the massive fleet must have been met in the course of the voyages of the Admiral himself. 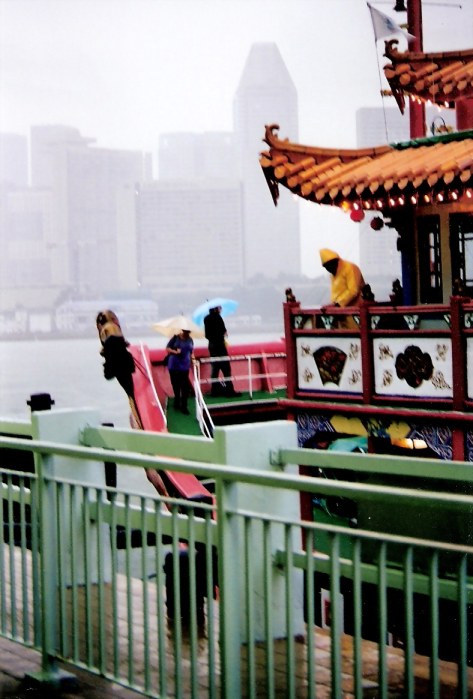 The harbour of Singapore

The Cheng Ho Cruise in Singapore harbour travelled through flotillas of junks lashed one to another in anticipation of the soon to arrive typhoon.

As we drew near to the mouth of Keppel Harbour there was a massive fleet at anchor, waiting to enter the second busiest port in the world and the only non-Chinese port in the top five busiest. 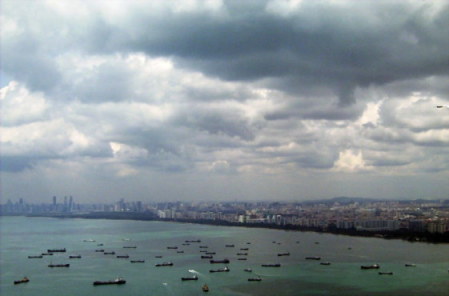 Strategically situated on the Straits of Malacca, Singapore has been a trans-shipping centre since the 13th century.

Now, the massive container port brings freight from 123 countries and from over 600 other ports.

Singapore's Keppel Harbour has three container ports and at night the rows of light-festooned cranes look like a mechanical chorus line of giant preying mantis.

The dimensions of the port cannot be grasped from the sea, but only suggested. Even so, looking from the land to the straits you realise that the port and its outward connections are actually the focus of Singapore.

For centuries the port has benefitted from the sea voyages of all nations: both in wealth from handling their cargos and from securing the natural resources not locally available but essential for the 5.7 million inhabitants of the 63 islands that make up the nation of Singapore.

The harbour hosts two international cruise terminals and from one you can take the cable car to Sentosa Island and it's giant aquarium of 45 million litres of water housing more than 100,000 sea creatures, including over 800 different species . You can be mesmerised by them when viewed through  the world's largest viewing panel of  36metres (118feet)  wide and 8.3metres (27.2feet)  high. 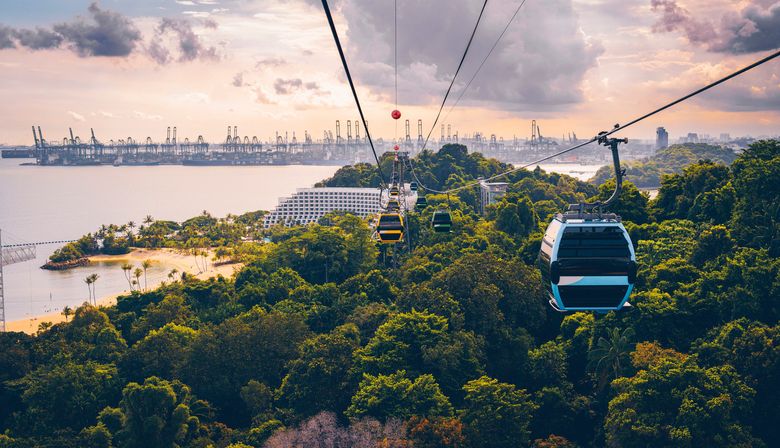 You can see the contrast from the rainforest to idyllic beach and industrial port.

Fellow travellers were in couples or groups, but even alone and in the grey winds of an approaching typhoon it was a memorable experience that caused me to discover a piece of Chinese marine history I had not previously known.

The food was passable but the evening was spectacular. 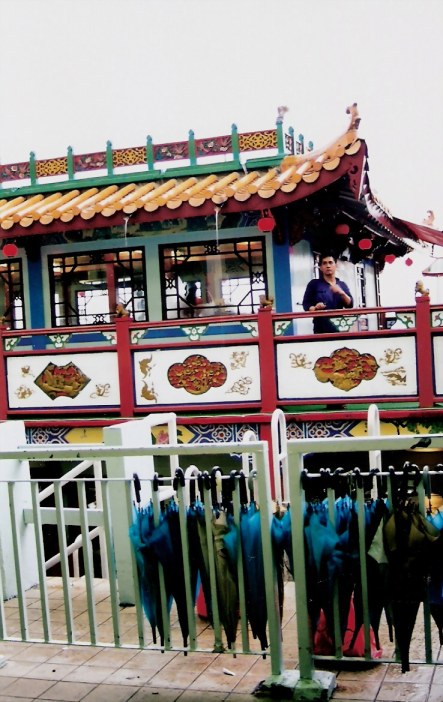 If you are visiting Singapore, check to see if this wonderful experience has been reconstituted after its closure. If so, a Cheng Ho Cruise is a trip well worth taking – and reputedly the day trips – taking a different route – are equally rewarding. 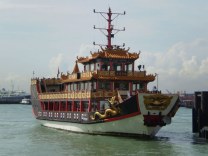 In the words of another great sea-goer, Jaques Cousteau:

to lead an extra-ordinary life ,

he has no right

to keep it to himself

For whatever reason, with the change of Emperor and the death at sea of the great mariner on his last voyage, the remarkable achievements of Admiral Zheng He were not captured in official records.

However, his exploits were so captivating that he lived on in fiction, before being researched in later ages by scholars the world over. Now, the dimensions of his exploits are finally being recognised and celebrated. The Singapore Cheng Ho Cruise is just one of those ways.

According to the Zheng He Society:

Zheng He was a Muslim and he distinguished himself by not imposing his own religious persuasion on people of other faiths.

He built many temples especially to Mazu (Goddess of the Sea), and made generous donations to many temples in China and in Sri Lanka. He also inscribed texts of Buddhist scriptures and donated them to Buddhist temples.

Perhaps his greatest achievement, and one that marks him out in history, is that he gave assistance to people in other regions irrespective of whether they were Muslim, Buddhist, Taoist or Hindu.

The Cheng Ho Cruise seemed  a fitting way to embed some understanding of the talented mariner and leader Zheng He in the memories of Singapore I brought  home .

If the cruise has been reintroduced when you visit, it may do the same for you.