Book your hotel in France

Boyardville is a working fishing port with a large marina on the east coast of Oléron – a place to wander, to sit and devour inexpensive excellent seafood and good local wines - and a place to rest before exploring the nearby oyster route.

Boyardville was the working port for the artisans who built the famous Fort Boyard, once one of the marine fortresses guarding the French coastline in the era of Eleanor of Aquitaine.

Fort Boyard has become famous from the board game and subsequent TV series set within it.

The port itself is a restful stopping-off point when touring Oléron. 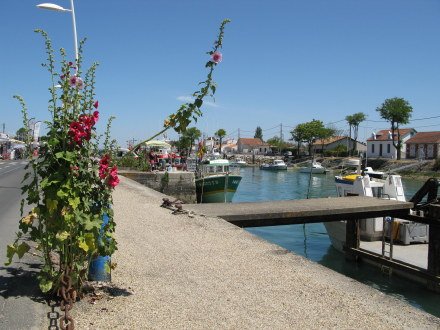 The fishing boats of Boyardville are as colourful as those at La Cotinière. 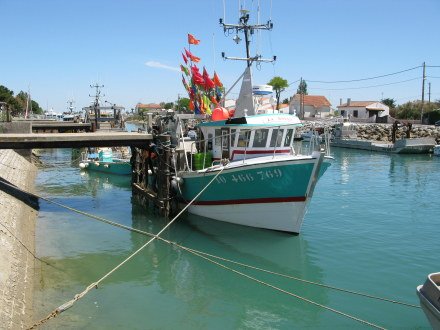 ,Here there appear to be more of the flat bottomed smaller boats that scuttle around the oyster beds at low tide.

As the tide recedes, these can be seen dotted across the shallows like little sand crabs under the massive 2,862 metre (9,390 ft) span of the bridge that has, since 1991, offered toll-free vehicular access to the island. 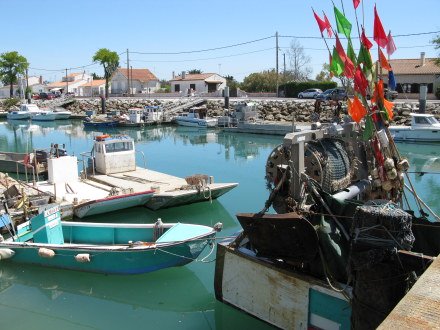 On the dock stood the now empty large plastic boxes in which the catch comes to shore.

Some boats had their flagged buoy markers bundled and lain on the deck. 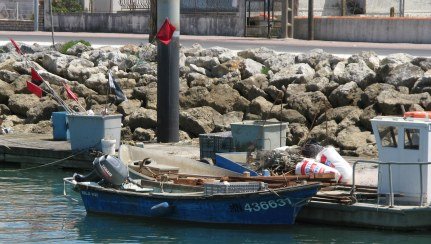 The colourful flag buoy markers of the larger sea-going fishing boats were standing upright in a flutter of colour on the foredecks. 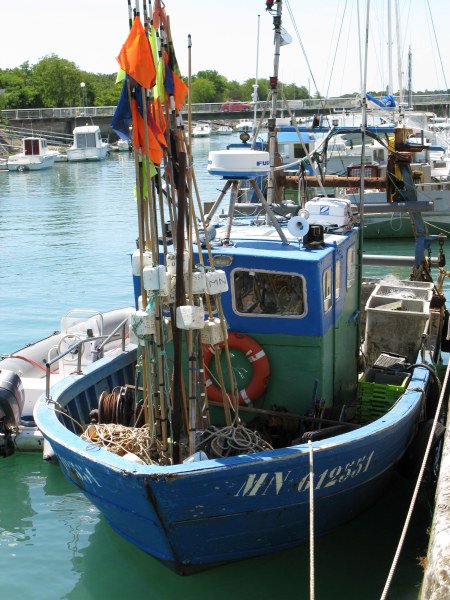 You can sit at one of the many waterside restaurants of Boyardville and watch both the movement of the fisher-folk and of others enjoying the ever-changing water scenery.

These young cyclists still wearing their cycling helmets were excited to show Papa what they had spied. 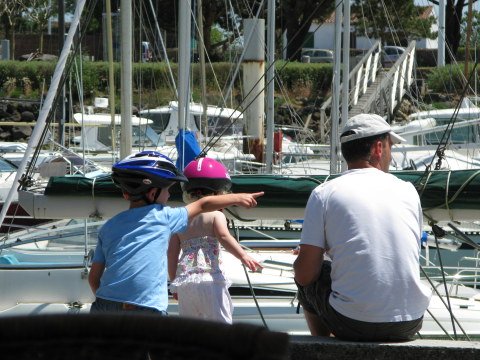 Meanwhile, I selected what proved to be the best little waterside restaurant (in my opinion, having tried a few over my stay). The 'Moules frites' at La Grange were best, and the staff friendly.

As you can see the fare was delicious. I had already devoured a platter of fresh local oysters and had washed it all down with good local Oléron dry white wine before the Moules Frites arrived. 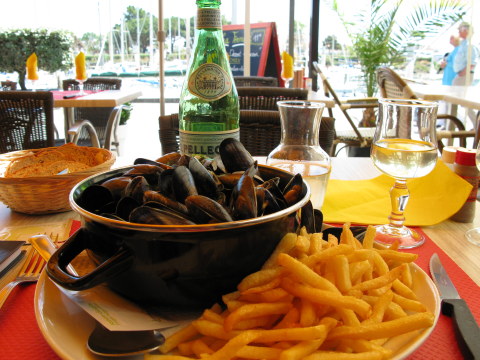 I was doubly delighted to find it not only a good place to eat - but considering that I had spent a considerable part of two hours grazing through the menu - reasonably priced as well. 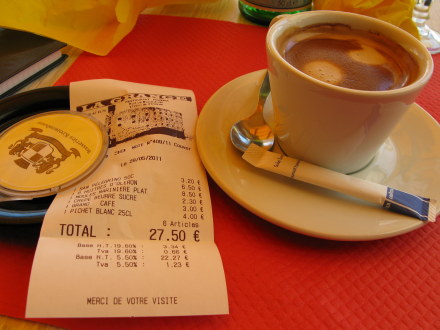 From the restaurant area you can wander around the Boyardville marina and check out how well the different nationalities dock their yachts.

When I was there the boats from British ports slid in close and snug on a direct tack.

Naturally there were more French yachts arriving and several docked with the help of what seemed like everyone on board and friends on the pontoon.

It could be that I saw seasoned British sailors in comparison to day sailor wannabe French yachties and not the “real thing”, but the contrast made for enjoyable afternoon theatre. 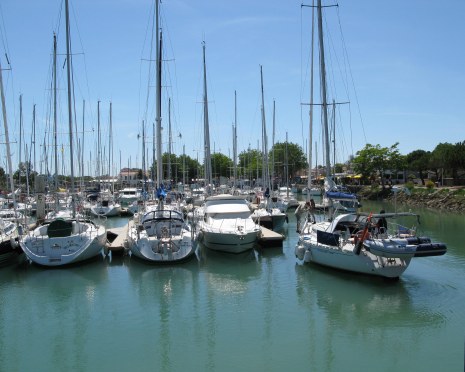 I wandered out along the channel at the mouth of the river to watch the boats returning to Boyardville with their catch.

A tall, elegantly casual man was enjoying a cigarette as he also surveyed the scene. He was apparently the proprietor of this little snug bar/ café that was snuggled amongst the fishermen’s houses.

As he returned to work I lingered on the hillside, smiling about lives that demonstrate a simplicity of values and an enjoyment of place. 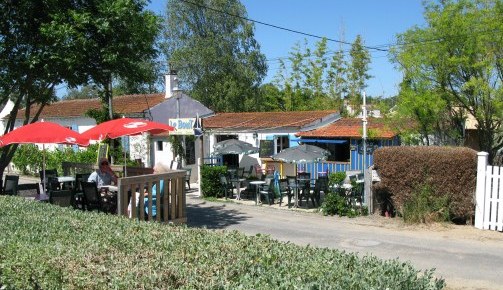 The little bar looked out across the marina and even had hammocks strung between the trees on the bank beside where I took this photo.

From your hammock you could lazily sip a drink and watch the marina activities, or just swing and think of nothing in particular and everything in general. 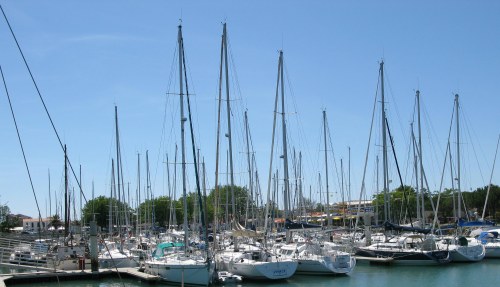 I liked Boyardville and came back one night for dinner.

My hammock bar looked so enticing I really wanted to go – but felt a bit shy. 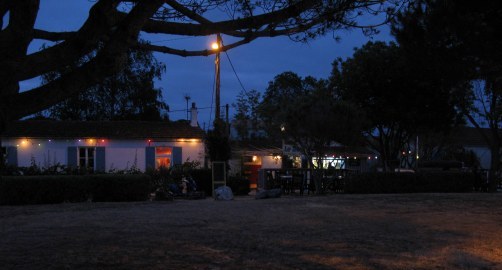 The place was like something out of a storybook but there were very few people there. As is often the way for a lone female traveller, I felt too conspicuous…so instead strolled along the riverside pathway that led to the open sea. 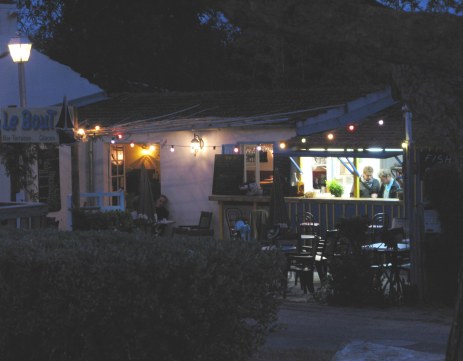 One of the small fisherman’s cottages overlooking the channel had a sign that it was for rent. 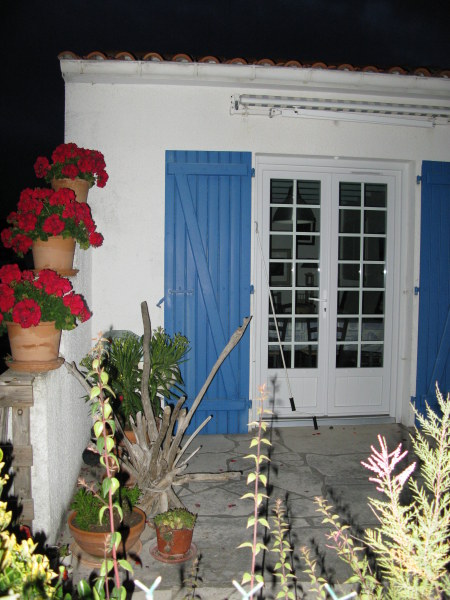 Not for the first time I thought what a relaxed place it would be to live.

The island of Oléron is one of those places that makes you think “I could happily live here”.

The great seafood, delicious local beef and lamb, vegetables grown beside each village, both good local white AND red wines, and friendly people –added to the great beauty of the place, must tempt thousands each year with this same thought. 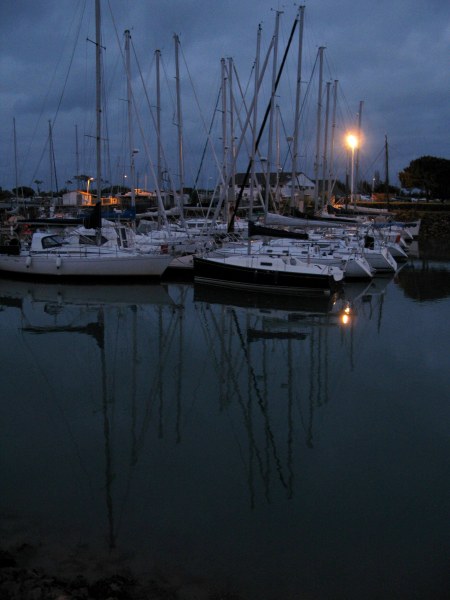 In the port towns of La Cotinière and Boyardville on Oléron there was a sort of night-time magic that swept over the place, casting dreams in the half light and intoxicating the heart with possibilities. 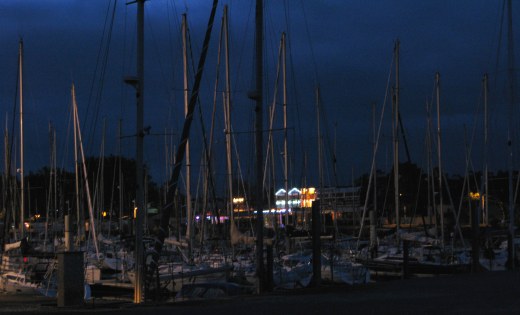 Boyardville bring out the philosopher in you

In the deep blue of twilight, looking back over the marina with the romantic little bar behind me, I listened to the familiar, and to me comforting clinking of yacht lines against masts.

I was lost in thought, caressed by the warm breeze and almost absorbed into the scenery of Boyardville – its warmth, the smell of the sea - the magic of a charming small fishing port weaving dreams around me.

This is the sort of place that breeds philosophers, and so too was I as the call of the open sea under canvas sail swept over me and the words of author Marjorie Holmes crossed my mind.

I find the great thing in this world

is not so much where we stand

as in what direction we are moving:

To reach the port of heaven

sometimes with the wind

and sometimes against it

but we must sail

nor lie at anchor

Standing alone in the quiet, with laughter and the clinking of glasses behind me and the town of Boyardville getting ready for bed behind the marina, I thought this to be a good quote but incomplete.

I agree with the principle, but drifting and lying at anchor also have their place – and I think sometimes we do both too little – and often when we do just drift or lie at anchor, we feel guilty for time for which we cannot account.

On the island of Oléron we can set down anchor or drift.

Boyardville tempts us to do just that.

The time does not need to be accounted for, and the more we resist the temptation to do so, the more the island atmosphere will be absorbed.

Then, we may remember our dreams for our lives, and feel renewed.

Then, when we return to from whence we came, we are refreshed by time on Oléron, one of the most charming of France’s many delights.